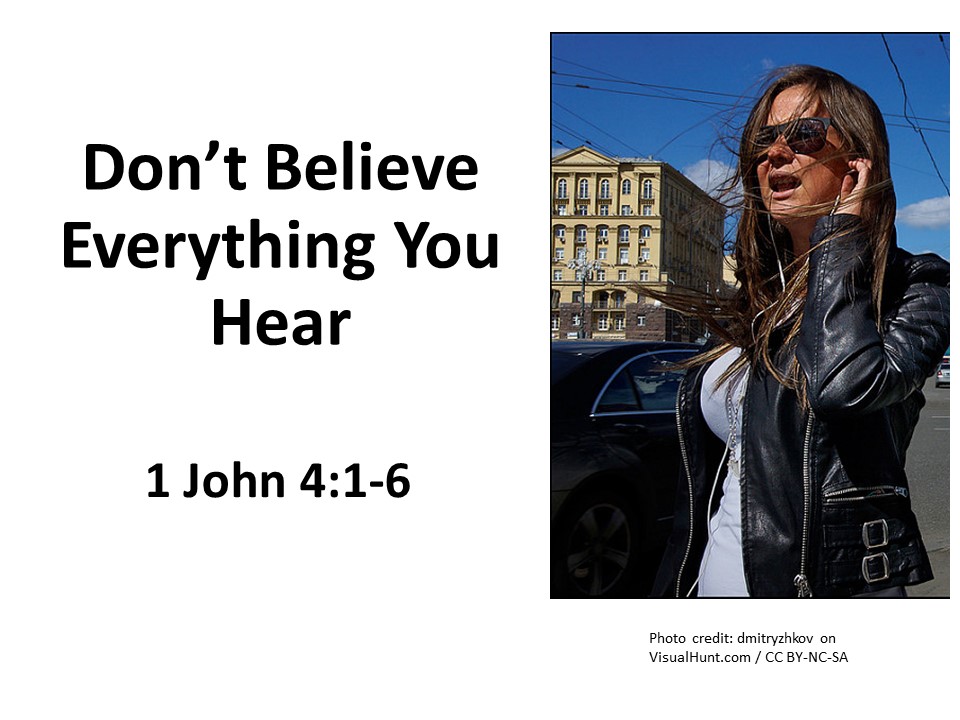 A few weeks ago I preached on the first chapter of 1st John. I noted then that this a love letter written to a church of whom John cares deeply. Today we’re looking at Chapter 4, verses 1 through 6.  These verses speak about the need of testing spirits and not believing all we hear. Within the letter this part stands between the end of the third chapter, where John gives one of his frequent encouragement for us to love one another, and the middle of the fourth chapter where John picks up again the topic of loving others. Yes, we’re to love one another (we get that, John), but we must also be careful to discern the truth.

As I emphasized in my last sermon on 1 John, one gets the sense there are those within the community John addresses who are trying to pull people away by false teachings about Jesus Christ.  Hear this passage as I read 1 John 4:1-6 from The Message translation. 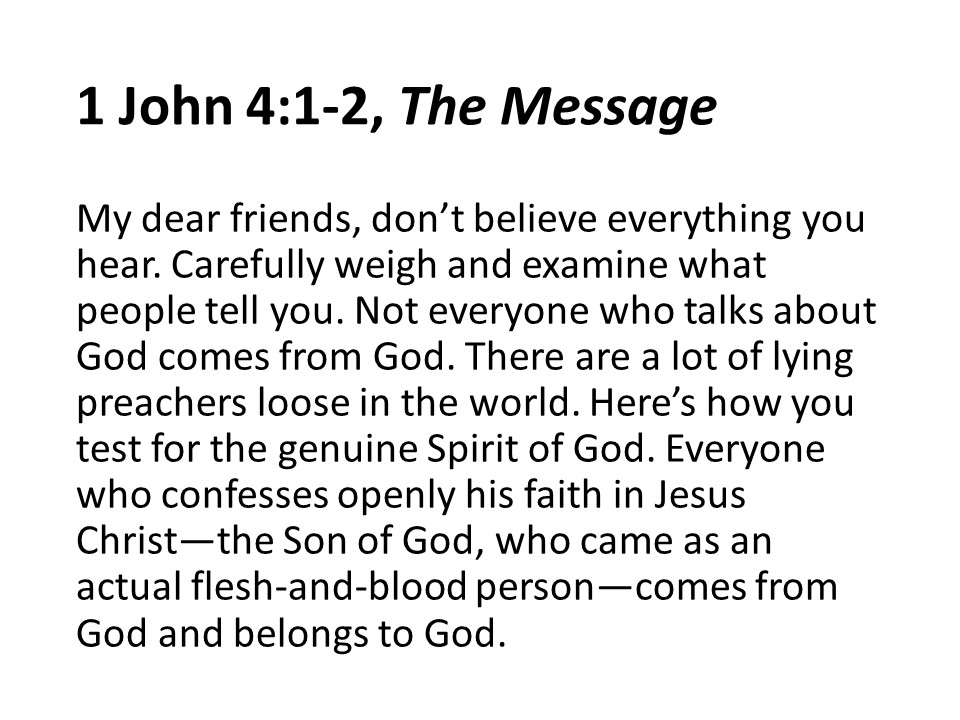 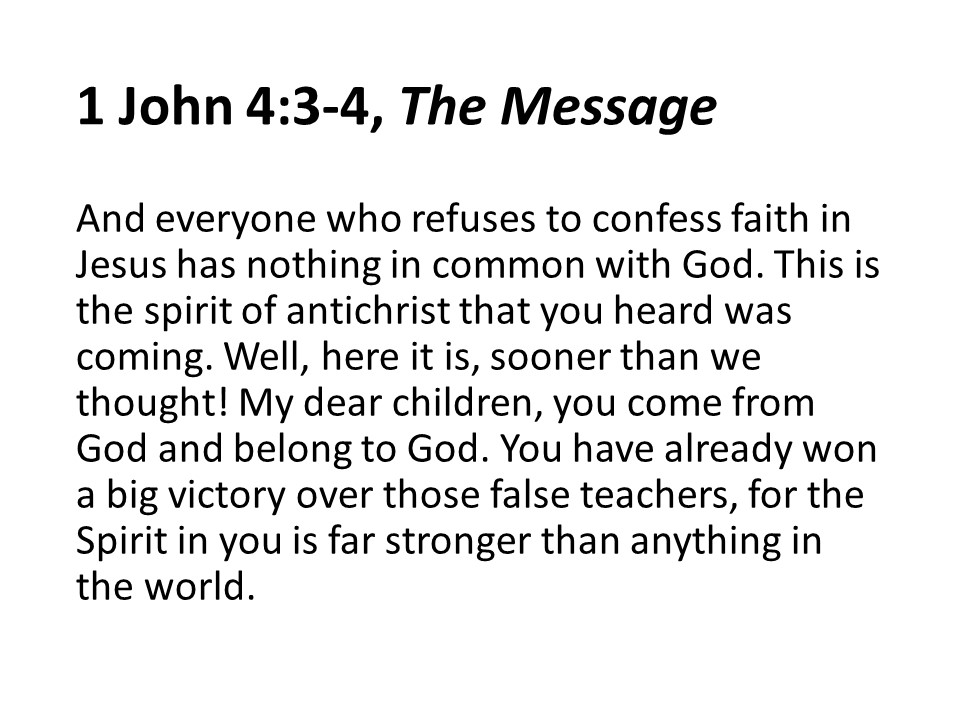 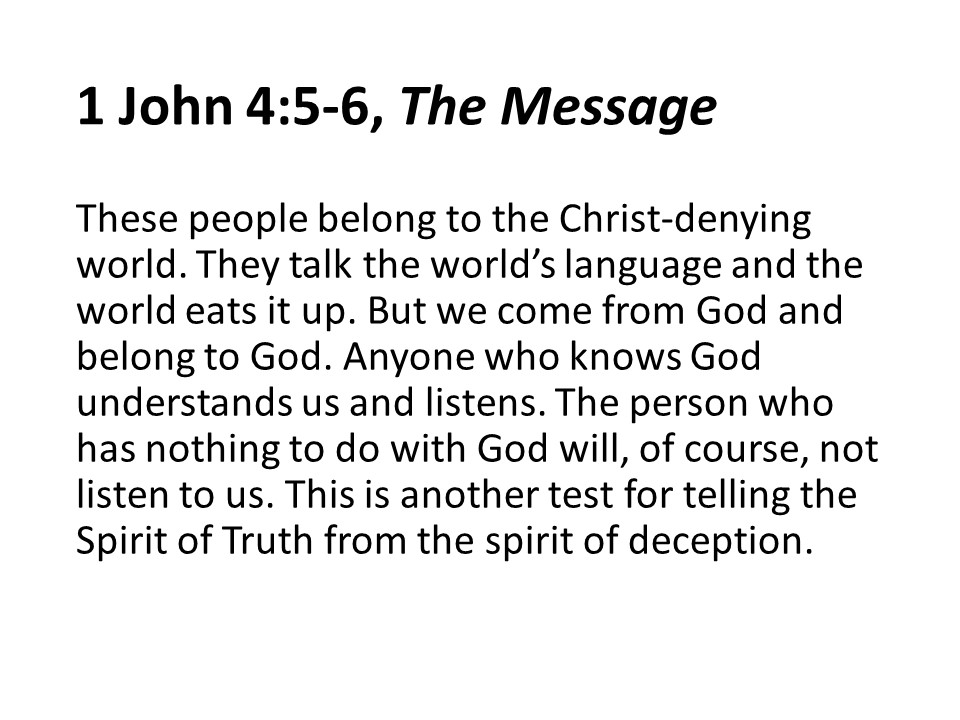 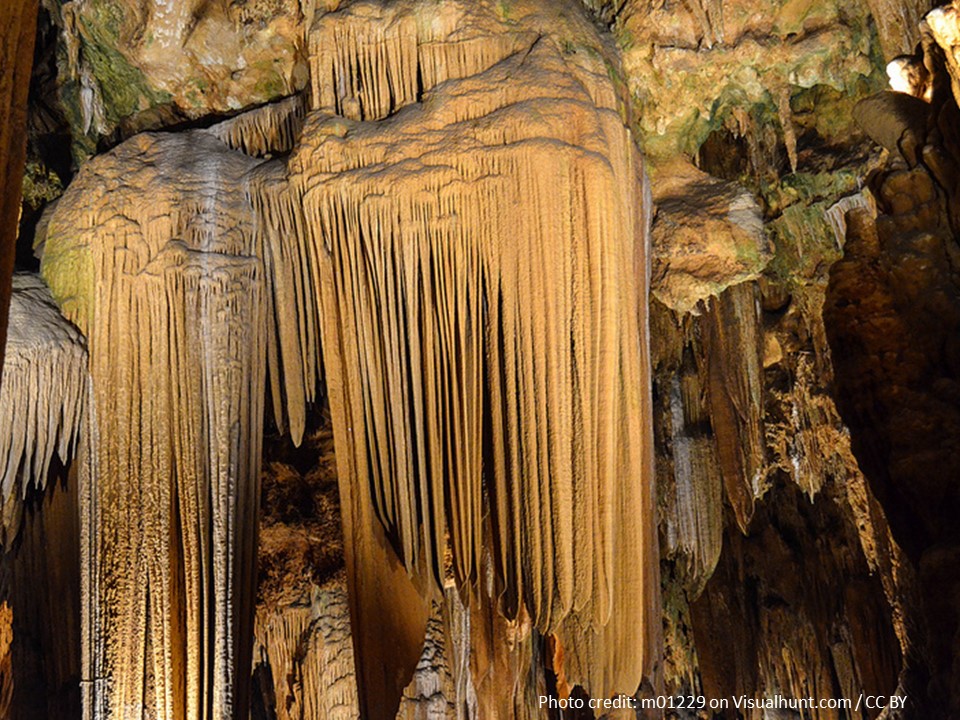 Some time in my first year in ministry, while serving a small church in Ellicottville, New York, I woke in a stupor between 3 and 4 o’clock in the morning. The room felt damp and cold, the type of cold that penetrates your bones. I laid flat on my back on the bed, and it seemed as if there were stalactites made of ice coming down from the ceiling and almost touching my skin. I couldn’t move, I couldn’t respond. I felt I was imprisoned in bed. It was dreadful. My heart raced and I panicked. It was as if I was in a cave, held by something terribly evil. Alone, I was single at the time, I felt trapped and in great danger. The only thing I could think of to do was to cry out, “Lord Jesus, help me.” As soon as I did, it all went away. I felt at peace and the room no longer felt damp and cold.

Was it a dream? Yeah, probably. But it was also very real. While experiencing this, I realized that the only way I could save myself was to call upon Jesus. That, in and of itself, is an important lesson. Calling on Jesus was all I could do. Otherwise those stalactites would impale me in bed. There’s evil in our world and it’s destructive as this dream illustrates. 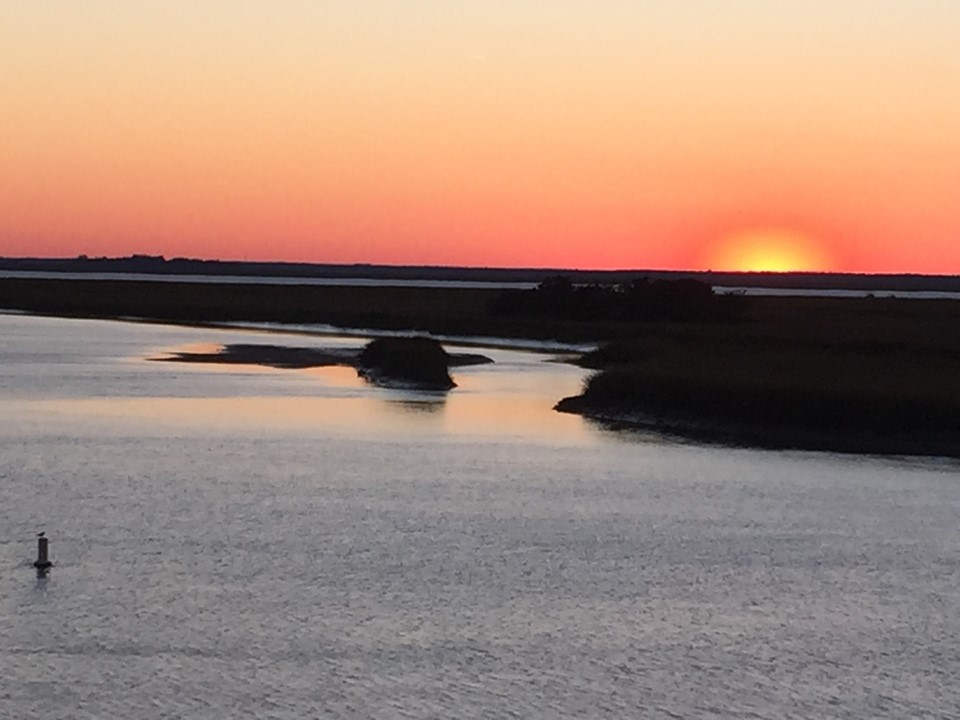 One of the comforting truths about God is that the Almighty is both good and all powerful. If God wasn’t all powerful, calling upon Jesus would not have given me any relief. The good news is that even though evil exists, even though there are elements within the world that challenges God’s reign and strives to mislead us, God is more powerful. God’s in control. John clearly understood this which is why he doesn’t limit his discussion within the letter to the love of God and neighbor. The Beatles may have proclaimed that “all we need is love.” John would agree, partly. “Yes, we need love, but we also need a little discernment.”

In this passage, John seems most interested in countering false teachings about Jesus Christ. I read The Message version which deemphasizes the discernment of spirits and focuses on “God Talk.”[1]

As I said in my earlier sermon on this letter, it appears the church John addresses was being challenged by those advocating a heresy known as Docetism, which holds that Jesus only seemed to be human. In other words, Jesus wasn’t really a man; he was divine, but appeared to be a man and appeared to die on the cross. Now, I should say that those who have such beliefs about Jesus are often well intended. They think of themselves as having a “high Christology,” one that lifts Jesus up. And yes, we’re to lift Jesus up and worship him, but we understand that while Jesus is divine, he also became a man. Jesus became human, in order to both reach out to us, to share in our sorrows, as well as to atone for our sin. 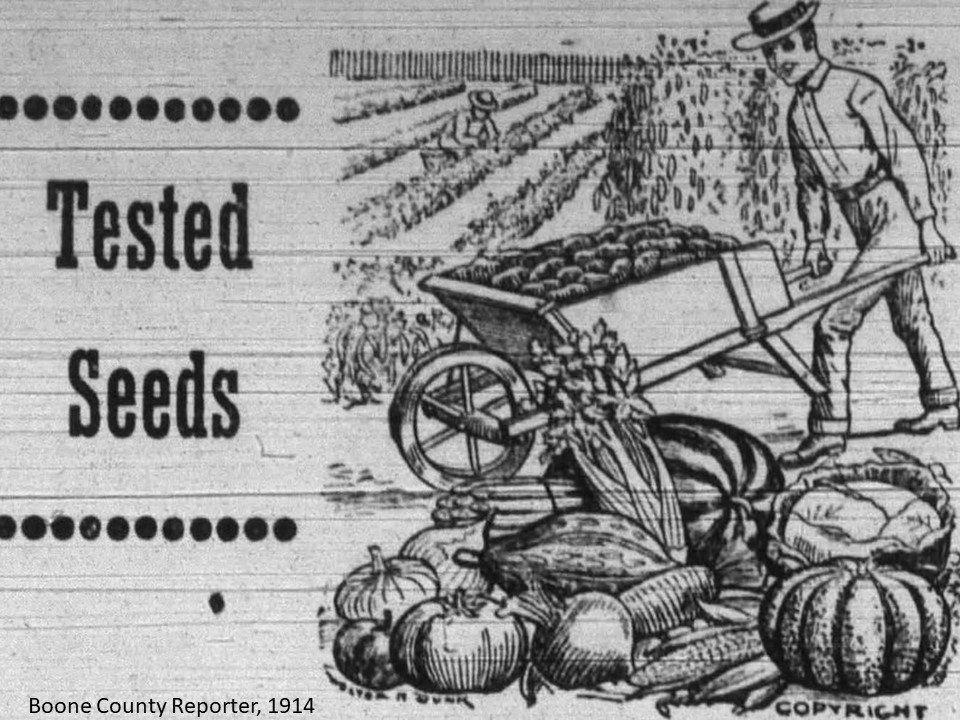 So John tells his readers that they must not believe everything they hear. It’s good advice; my mother gave me the same advice when I was in kindergarten. I like the way Eugene Peterson, in The Message translates the first verse of this chapter: “Don’t believe everything you hear. Carefully weigh and examine what people tell you.  Not everyone who talks about God comes from God. There are a lot of lying preachers out there.”  Now, Eugene could have left out that last verse, but since he too is a preacher, we’ll let it slide. Besides, he and John are not just referring to clergy, but to anyone who talks or teaches or writes about God. We have to be careful how we discern what is right and noble and what is wrong and bad, lest we be misled. We live in world where we’re being bombarded with information at such a rapid level that we have a hard time discerning what is good and bad, right and wrong. 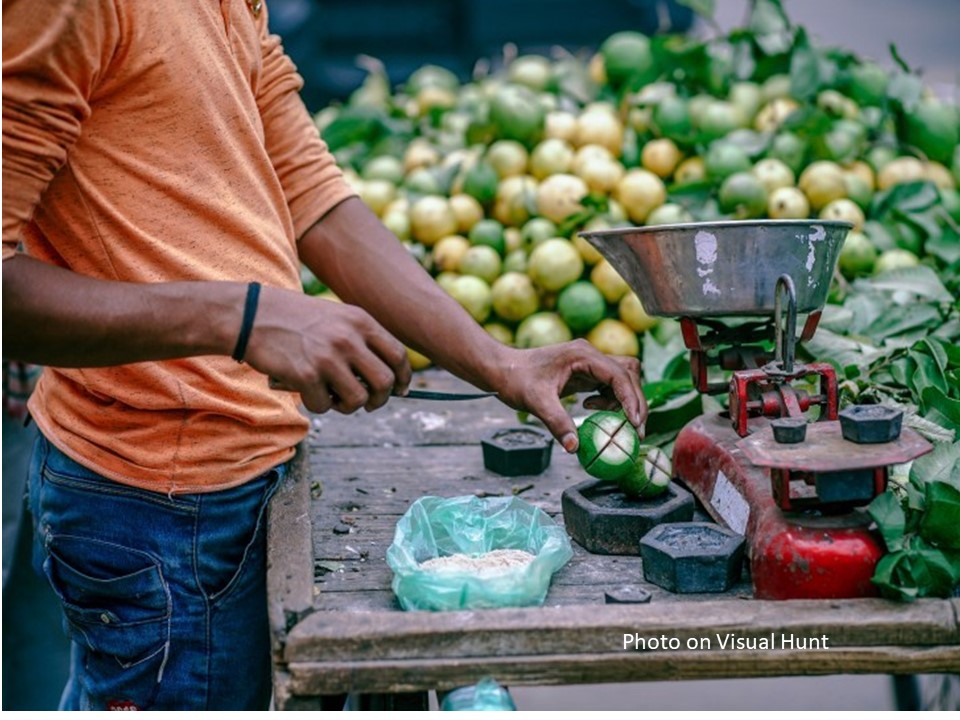 There’s a lot of questionable views out there that can problematic. The “Wealth or Prosperity Gospel”[2] which teaches that if you’re really good, have faith and, most importantly, tithe, God will materially bless you. (How’s that worked out over the centuries?)  Teachers who put the emphasis on our actions and not on God’s grace are another example of those whom we should question what they say. And then there are those who ignore or contradict God’s word as if the 10 Commandments are the 10 Suggestions. 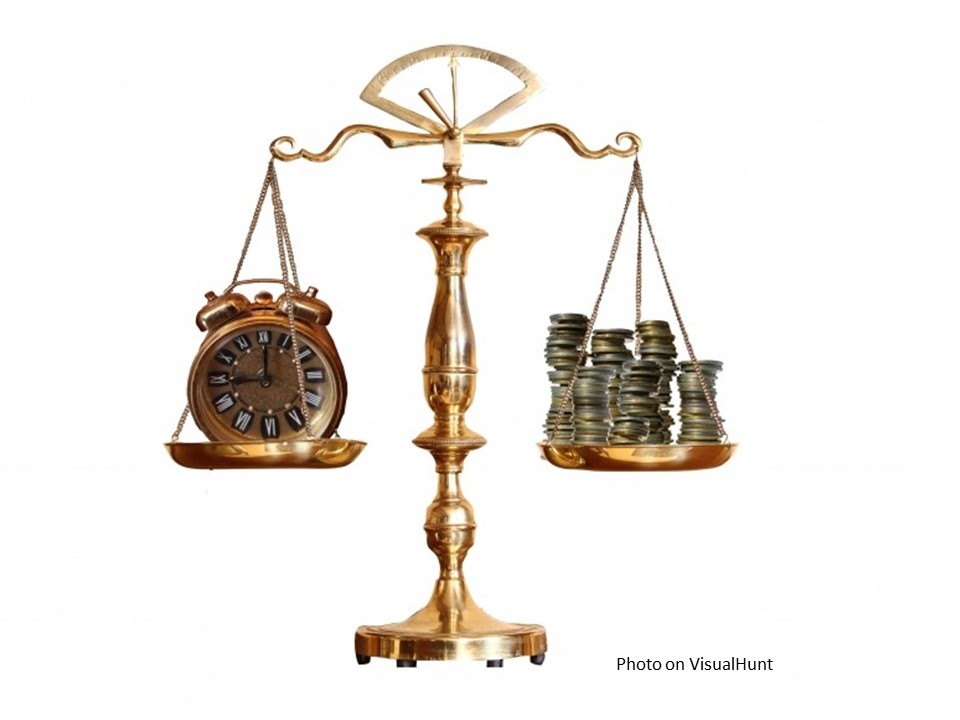 With the internet, we live in a world where it’s easy for people to get their message out, regardless of its validity. We hear a lot about fake news and while sometimes that charge is used as a red herring to discredit another’s position, we have to acknowledge there is a lot of bull out there that we come across. And, at least politically, it comes from all sides. We must understand that not every idea is good. Not everyone’s intentions are noble. There are those who will mislead us. Sometimes they may be misinformed, but often they are trying to get us to vote in a particular way, or get us to support a particular position, product or organization, or perhaps to drive up or down the price of a stock.

Buyer beware! This is a lesson the human race should have learned back in the garden when Eve had that little chat with the serpent. But the lesson hadn’t taken hold by John’s day, nor has it taken hold in ours. 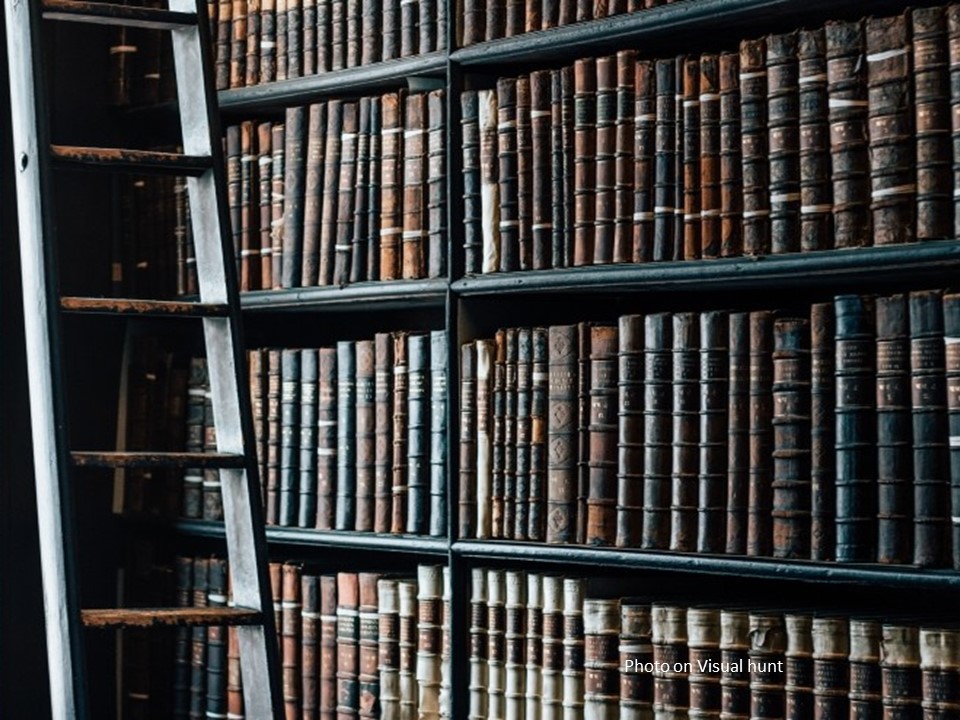 There are two main points that John brings out here. First of all, to put this in the style of an English teacher instructing students on writing essays, “we must understand that misinformation abounds and we check our sources.” John’s concern is primarily in what people are saying about Jesus, so he tells his readers not to trust those who do not confess that Jesus has come in the flesh and is from God. Secondly, John reminds his readers that God has already won the victory for us and that God’s Spirit is stronger than any of the lesser spirits in the world—those from the antichrist—who are spreading misinformation about Christ. 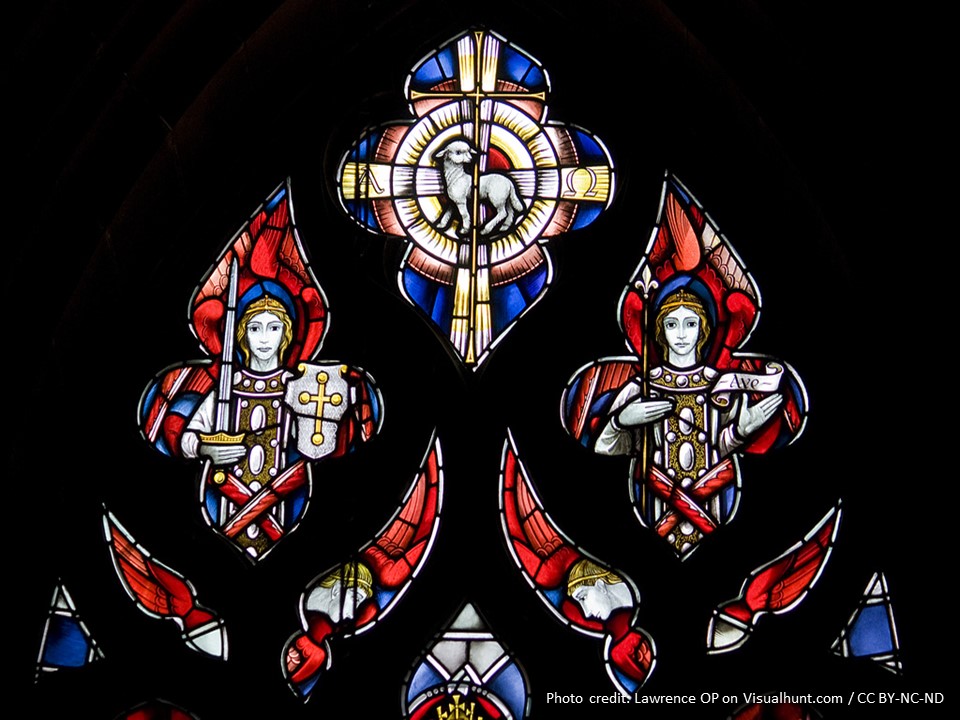 John is mainly interested in Christology, what people believe about Jesus Christ. Do they believe that Jesus is both human and divine? In John’s day, it seems that some were erring on the side of divinity? Today, it seems as if the pendulum has swung and many folks instead of placing too much emphasis on Jesus’ humanity, deny his divinity. Both are wrong. Now, John is right in that we need to love others, including them, we just don’t need to follow them.

John’s advice here, not to believe everything we hear, is as useful today, if not more so than it was 2000 years ago. For not everything we hear is noble. Not everything is true. Not everything is good. We have to test the spirits, we have to test what we hear and discern if it is true and also good. Unfortunately, John doesn’t give us a lot of advice here on discernment.[3] His focus more narrow. He gives us a test as to whether or not a teaching about Jesus Christ is true. If such a teaching is true, it’ll assert that Jesus is God incarnate, which is a tension that we hold together, this notion that yes, Jesus is divine, but also yes, Jesus is human. 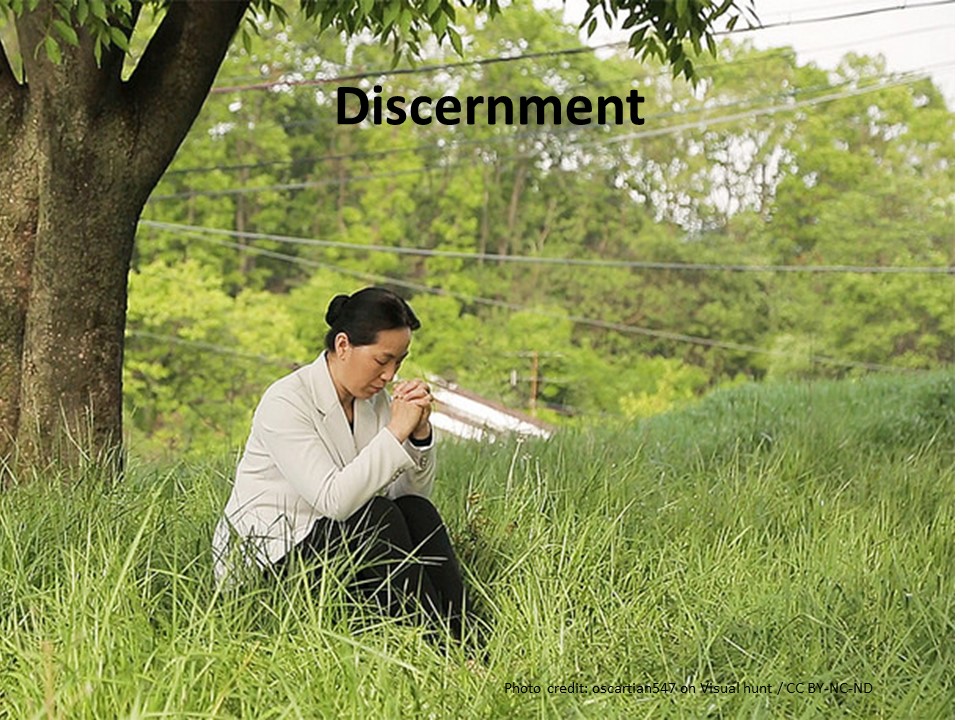 There are other places in Scripture where we can go to learn more about discernment. Jesus tells us to that we’ll know people by their fruits,[4] a teaching that presupposes the goal of evil to be death. If what one says and does brings life in the eternal sense, it’s true. If what one says and does brings destruction and death, it’s not true. In Galatians, Paul talks about the work of the flesh as opposed to the work of the Spirit in one’s life. God’s Spirit brings about love and joy, peace and patience and kindness, generosity, faithfulness, gentleness and self-control.[5] Is the teaching true; is it life-affirming; does it result in better people? We need to ask such questions about that which we hear as well as our own beliefs. Remember that folk song that lifts up a simple truth, “They’ll know we are Christians by our love.”

Friends, we live in a tough world.  It’s a world that wants to deny the Creator, the source of life. Hold fast to the truth that God so loves the world that in the life of Jesus Christ, he came to us as a man! That’s the truth; that’s the gospel; that’s what we’re to be about and what we proclaim at this table. Amen.

[1] The NRSV begins this passage, “Don’t believe every spirit.  The King James and New International versions tend to follow the same path while paraphrases like The Living Bible and The Message emphasis what we  hear from others.