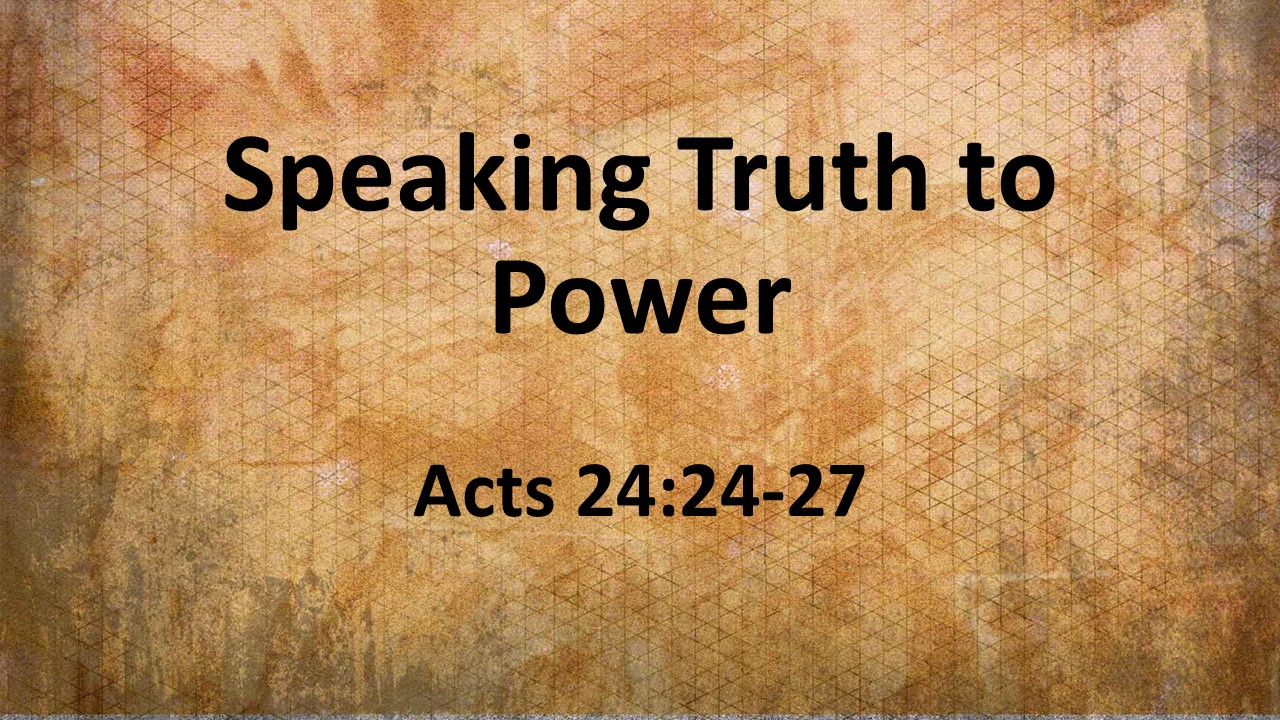 What do we say when we are called or have an opportunity to speak to those in power? How do we behave? How do we act? Speaking to power is always dangerous but as Christians, we’re to speak the Truth, as we’ll see in today’s scripture.

A few weeks ago, before taking a break from our journey through the book of Acts, we saw that Paul was whisked out of Jerusalem by the Roman army. In Jerusalem, he was being hunted down by a group of over 40 assassins. Now Paul is safe in Caesarea, a Roman city along the coast. It’s here that the governor has moved his headquarters. During Jesus’ time, Pontius Pilate maintained his presence in Jerusalem. Roughly 20 years later, things are in turmoil. It’s just seven or eight years before Judaea erupts into war as the Jews throw off the Roman yoke. But that’s in the future. Now, to be safe, the capital is in Caesarea and the Romans are just trying to keep everything under control. 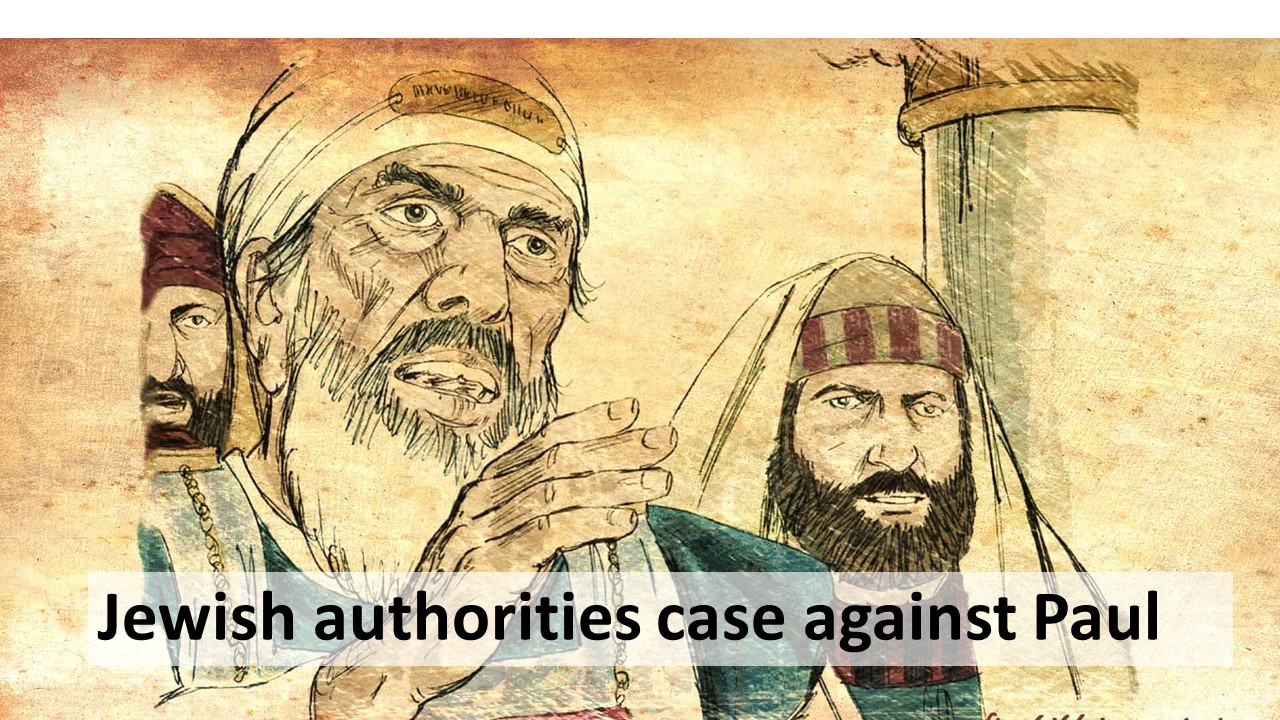 The Romans, wanting to get to the bottom of this conflict between Paul and the Jewish authorities, call them both in before Felix, the governor. Both sides makes their case. We heard in the previous scripture reading Paul’s side of the argument. Paul begins by acknowledging the Roman governor as the rightful judge and he’s willing to have his case heard before him. He tells how he is still worshipping the God of his ancestors and how those in the sect known as “The Way” (that being the church) are being persecuted because of their belief in the resurrection. 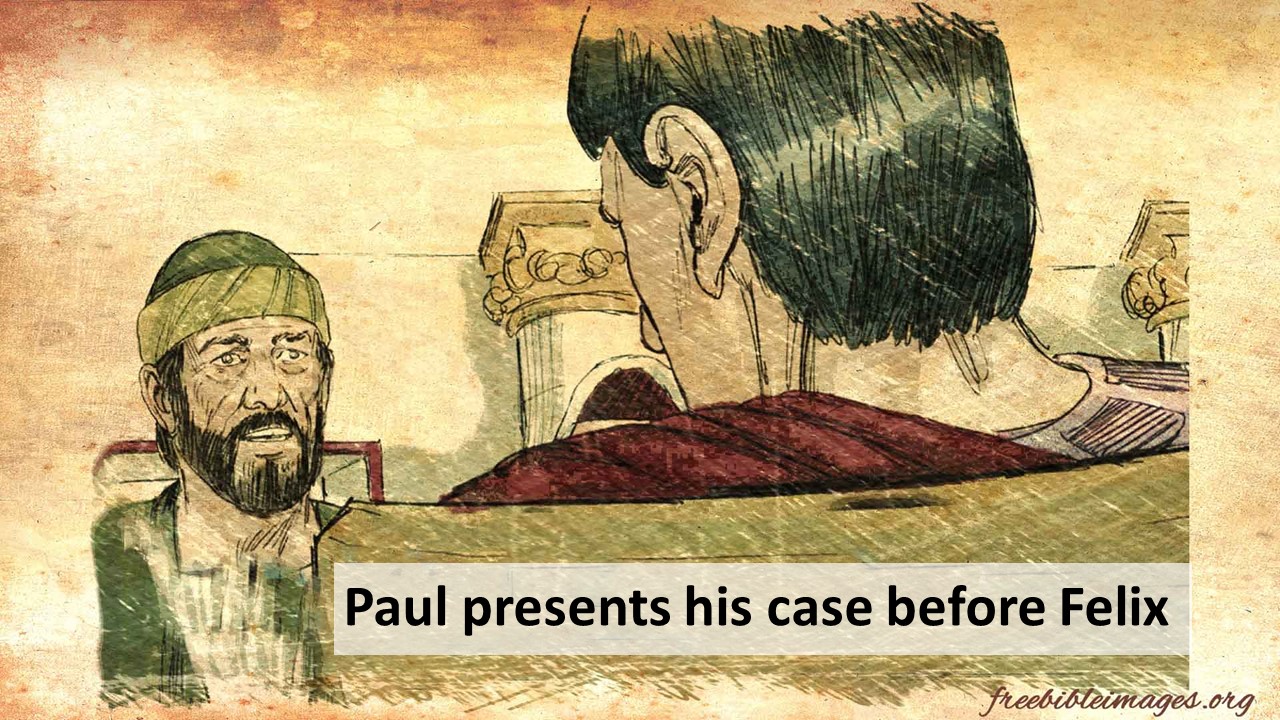 Felix, we’re told, was well informed about “The Way.” We know his wife, who’ll play a role in our message today, was a Jew. She was probably Felix’s source of knowledge about the faith. After having heard from both the Jewish authorities and Paul, Felix declines to make a judgment until he hears from Lysias, the head of the Roman forces in Jerusalem. He’s the man who kept Paul from being killed by the mob. So Paul remains in prison, although he is given some freedom. His friends can visit him and see to his needs. This is where our reading begins this morning. 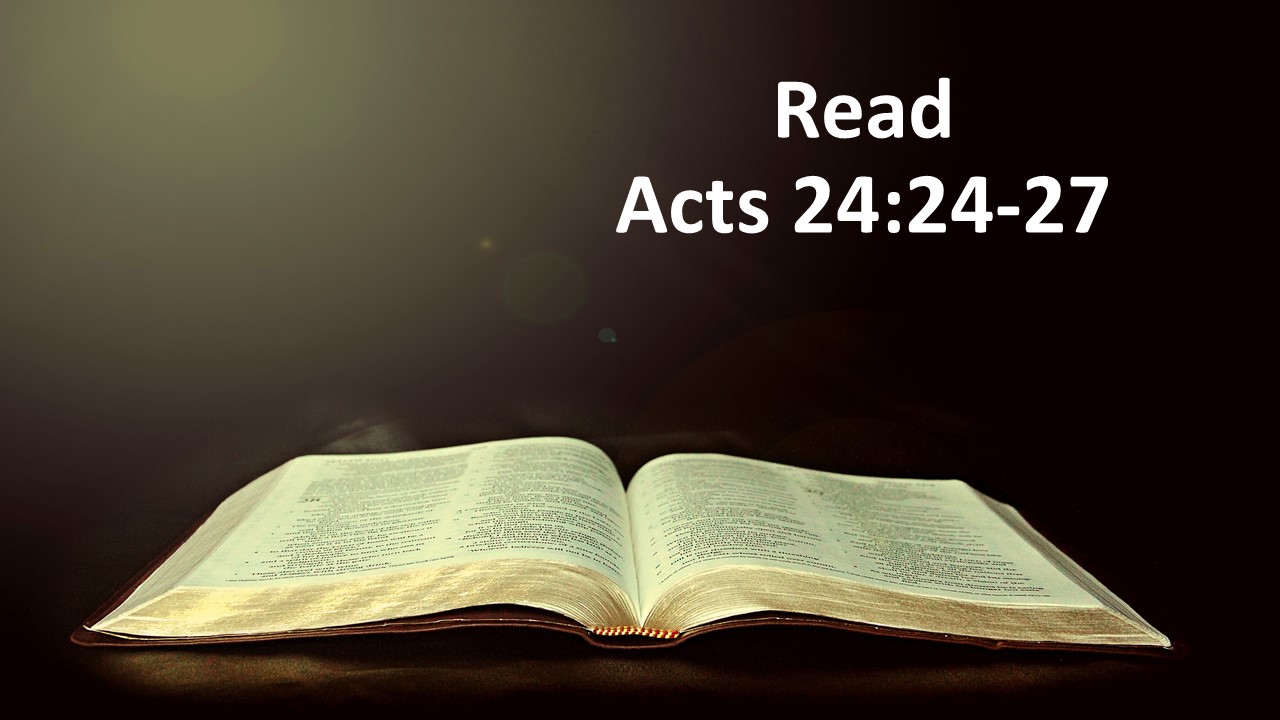 How do we speak Truth to power?  How do we stand up before those who have the power to stomp us and address issues that are not popular? This might be something we think doesn’t apply to us, but it does. We start out early, when we address our parents. Later on, it’s our teachers, the principal, and a police officer. We address power when we speak to our boss and later maybe to the Chairman of the Board. If we’ve ever been in court addressing a judge or talked with a politician, we’ve spoken to those in power. 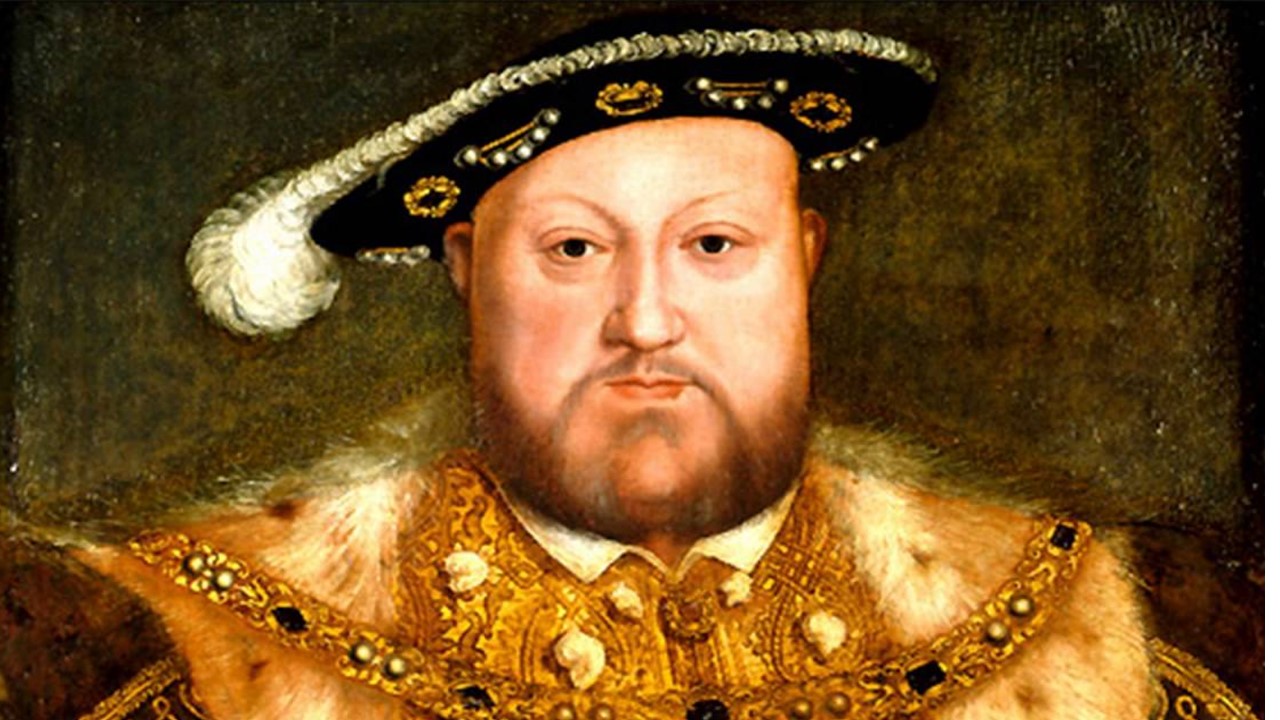 There is an often-told story, and I’ve told it before, about Hugh Latimer. Latimer, one of the leaders of the English Reformation, was about to give a sermon.  He knew that Henry the 8th was in the audience. As he waited to enter the pulpit he heard a voice say to him, “Latimer, remember you are preaching before King Henry, who has the power to take your life away.” But then he heard another voice, “Latimer, remember, you are preaching before the King of Kings.” It’s all about perspective, isn’t it?

Thankfully, I don’t find myself preaching before Kings and those with absolute power very often… Except, of course, every Sunday I’m standing before the King of Kings.

Our reading today may seem rather benign. On the surface, it appears as if it is just the factual accounts of what happened. But this is one of those passages in which a little understanding of its context opens it up wide for us to see the truth found within. When you read it on a surface level, you miss the Roman soap opera that’s going on behind the scenes. 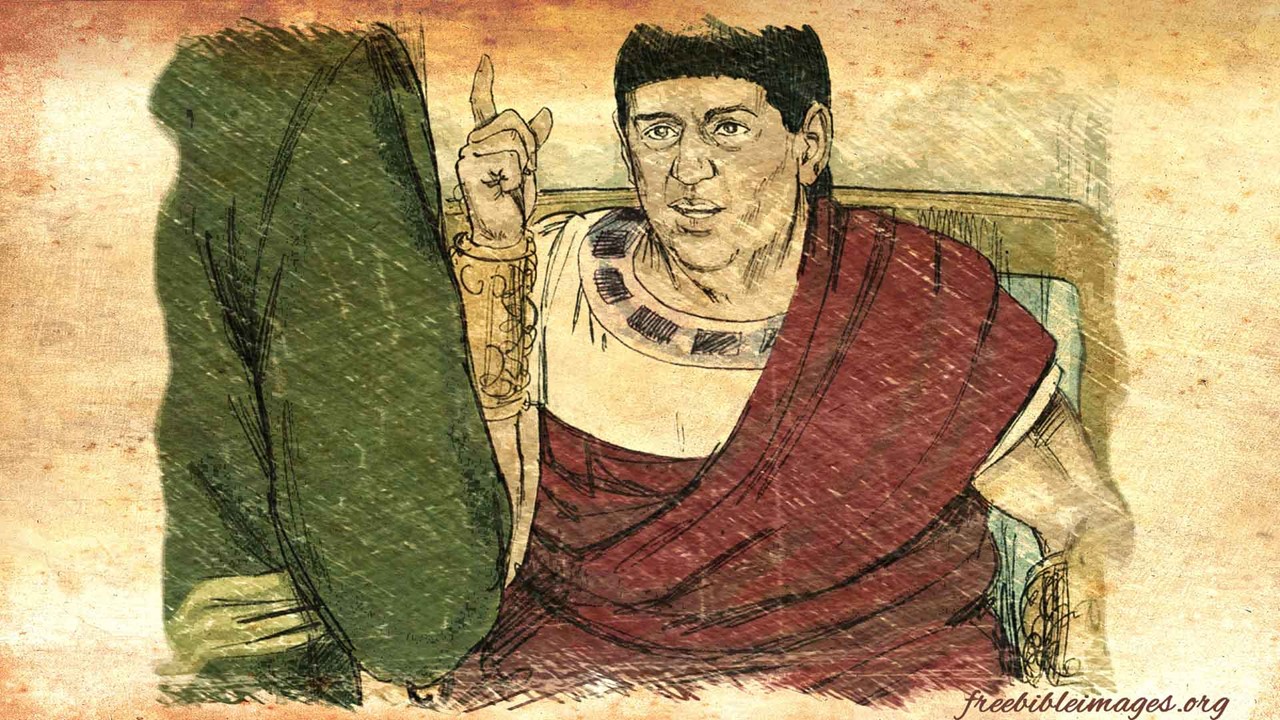 Felix is an interesting man. He came from humble origin. His family appears to have originally been slaves. His brother, who was a freedman, worked for Claudius, who’d later become the Roman emperor. Felix became governor of Judaea and served in that capacity from 52 to 59 A.D. This was a time when the Jewish population was becoming restless and Felix was ruthless. He stomped out any threat to the Roman authority. He was so brutal that many moderate Jews who had been okay with Roman rule became (as we’d say today) radicalized. Brute strength has a way of doing that. In addition to his ruthless rule, Felix was also a charmer among women. He had three wives, all who were princesses. He took the cream of the crop. His first wife was the granddaughter of Anthony and Cleopatra. Of Felix, one historian noted, “He exercised the power of a king with the mind of a slave.”[1] 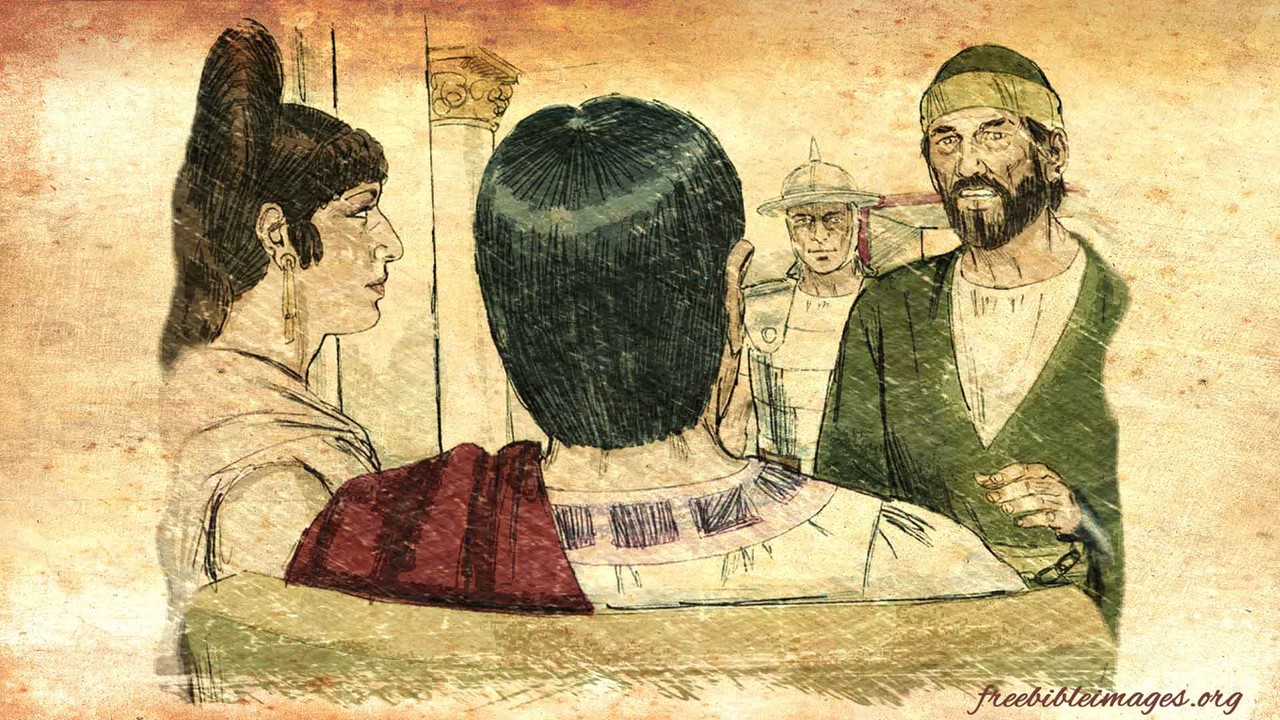 The artist must not have read Josephus’ as Drusilla isn’t exactly a beauty and appears to be much older than 19.

Sitting next to Felix in our passage this morning is his third wife, Drusilla. She’s Jewish and has obviously informed her husband about “The Way,” as the early church was known. Drusilla also has a backstory. She is the daughter of Herod Agrippa I, who if you remember back to Acts 12, had James, the brother of John, killed.[2] “She did exceed all other women in beauty,” according to the Jewish historian Josephus. She is still quite young, probably 19 at the time she and Felix sent for Paul. When she was even younger, she was married to the king of a small Syrian state. But when Felix set his eyes upon her, he did what he could to woo her away. Her first marriage was dissolved and she married Felix. They had a son, Agrippa, named after her father. And an interesting side note that helps put this in context of the time, her son would die in 79 AD at the eruption of Mount Vesuvius which destroy Pompeii.[3]

Now you have the backstory to our passage today. Paul is being called before two people who are guilty of adultery. One of them is guilty of serial adultery. Furthermore, Felix isn’t the most honest of governors. As Luke indicates in the text, he is hoping to get a bribe from Paul in order for Paul to obtain his release. While there were laws against bribery, by this era, the Roman government was becoming corrupt and those in power often expected their backs to be scratched before they granted a favor.

So Paul is summoned by a corrupt governor and his wife, both of whom are guilty of adultery. And they are asking him about his faith in Jesus Christ? What would you say in such a situation? If you are Paul, what do you say? If Paul plays his cards right, maybe they’ll let him go free. Paul could have talked about love and forgiveness and being nice… But that’s not what Paul does. As one commentator wrote, “Paul is God’s faithful prophet, who like the prophets of Israel boldly proclaims the truth of God, despite the possible cost.”[4] 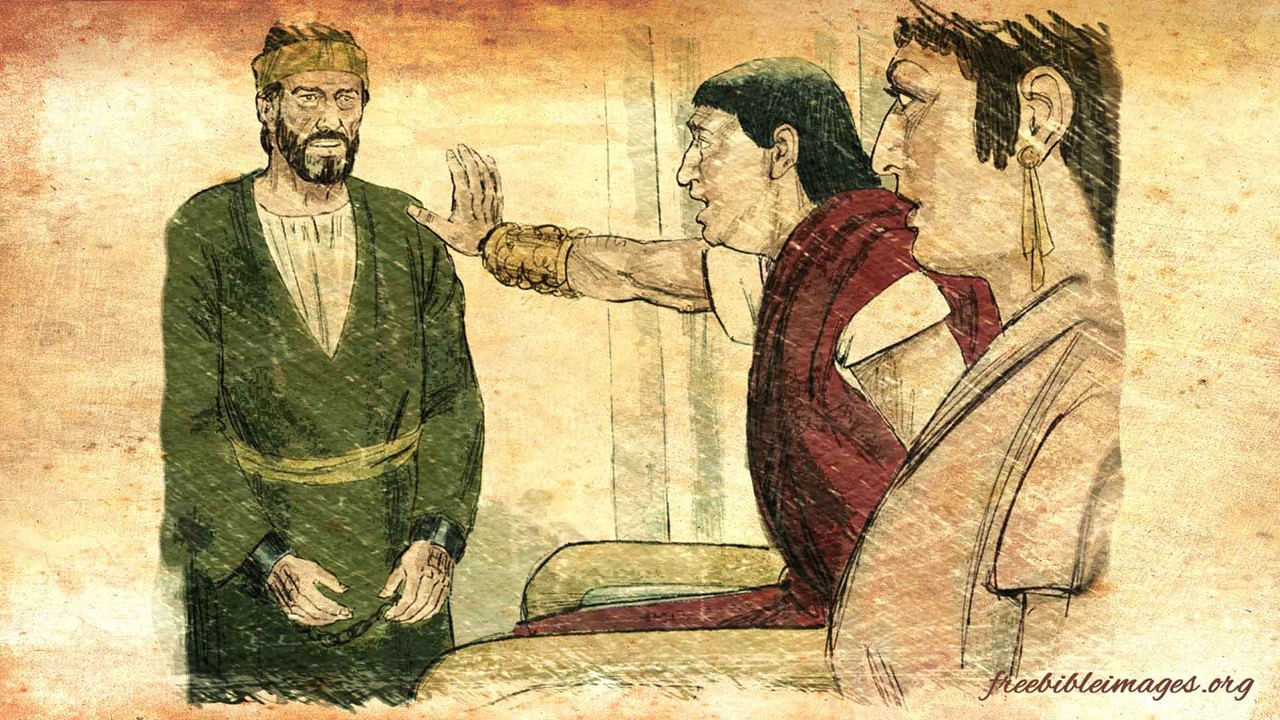 Paul speaks to this corrupt governor about justice. Do you think that went over well to a man accustomed to bribes? Paul then moves on to self-control. How does that sound to a couple known for their adultery, especially Felix who has multiple experiences with the sin? And then Paul talks about the coming judgment. The couple who were curious about the Way, the Christian faith, are now squirming in their seats. I can envision Felix, his face red, the veins in his neck protruding as his blood pressure rises. Felix is usually the judge; now Paul warns him of an impending judgment in which he will stand before the throne. Felix calls the guards and orders them to take Paul away. 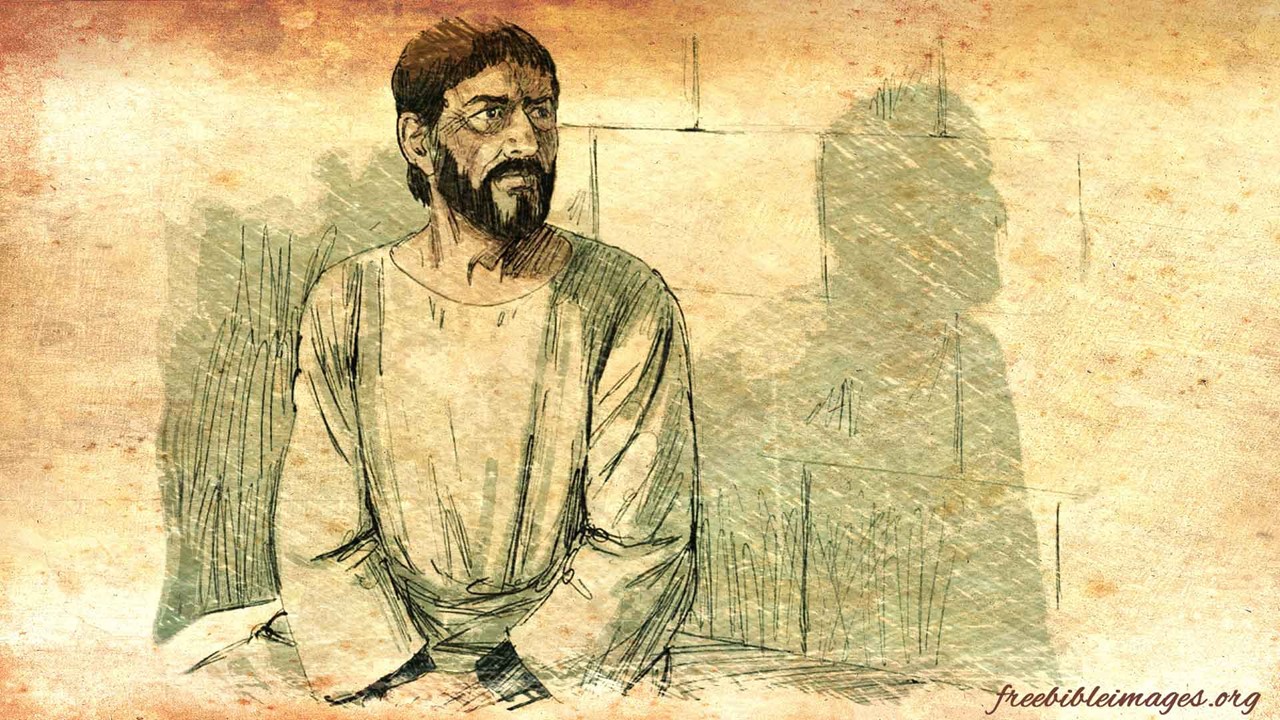 So how does Paul speak truth to power?  If you go back to verse 10, you’ll see that Paul honors Felix. He’s been in power six or seven years at this point. But even while honoring Felix and his position, Paul speaks to his sin. Paul speaks truth to Felix and Drusilla. From what we know, Paul didn’t go around gossiping about the two. He didn’t belittle them behind their back, nor to their face. But when we was called before them, he told the truth. He told the truth even though it didn’t do him any good.

Furthermore, in addition to telling the truth, Paul refuses to pay a bribe. He’s not going to become involved in the corruption that’s rampart within the Roman world. He wants to keep his conscience clear before God and all people.[5] 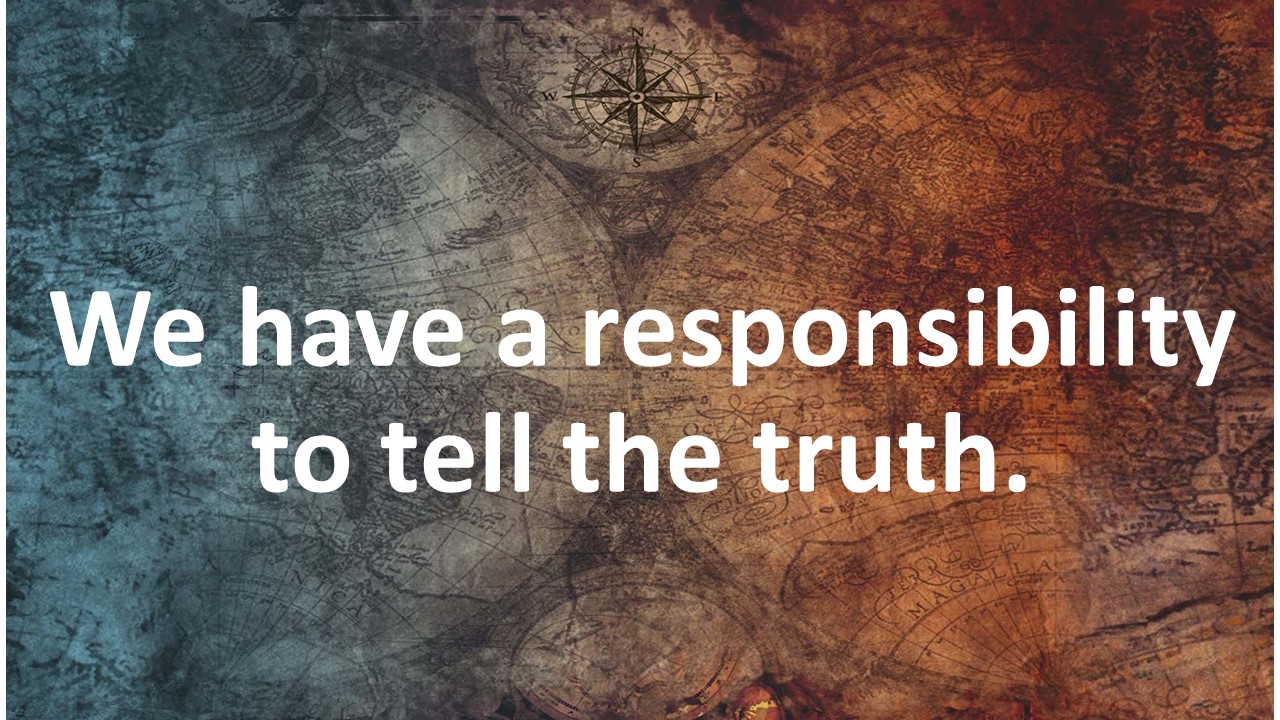 As Christians, we have an obligation to honor those in positions of authority. But we also have a higher obligation to God. When called upon, we’re to keep our conscience clean, to avoid corruption, and to tell the truth. Amen.