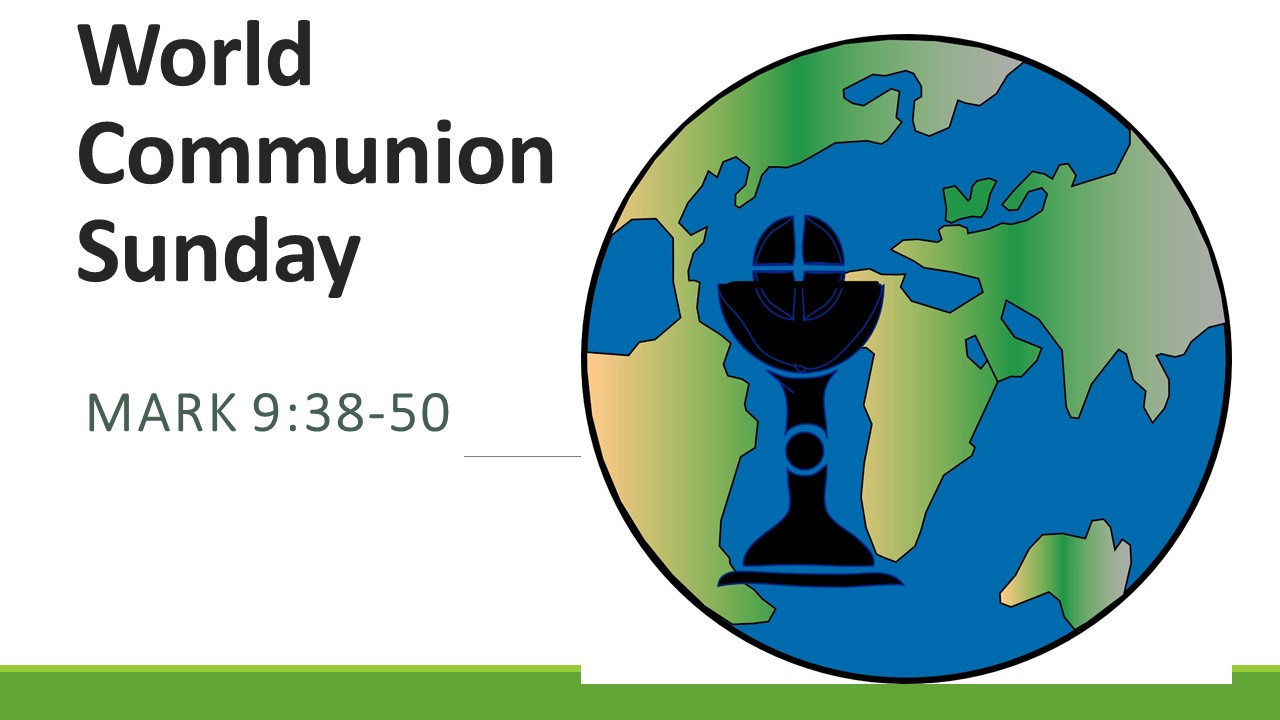 It’s World Communion Sunday and Christians around the globe gather around this table to celebrate. But why? What are we to be about? 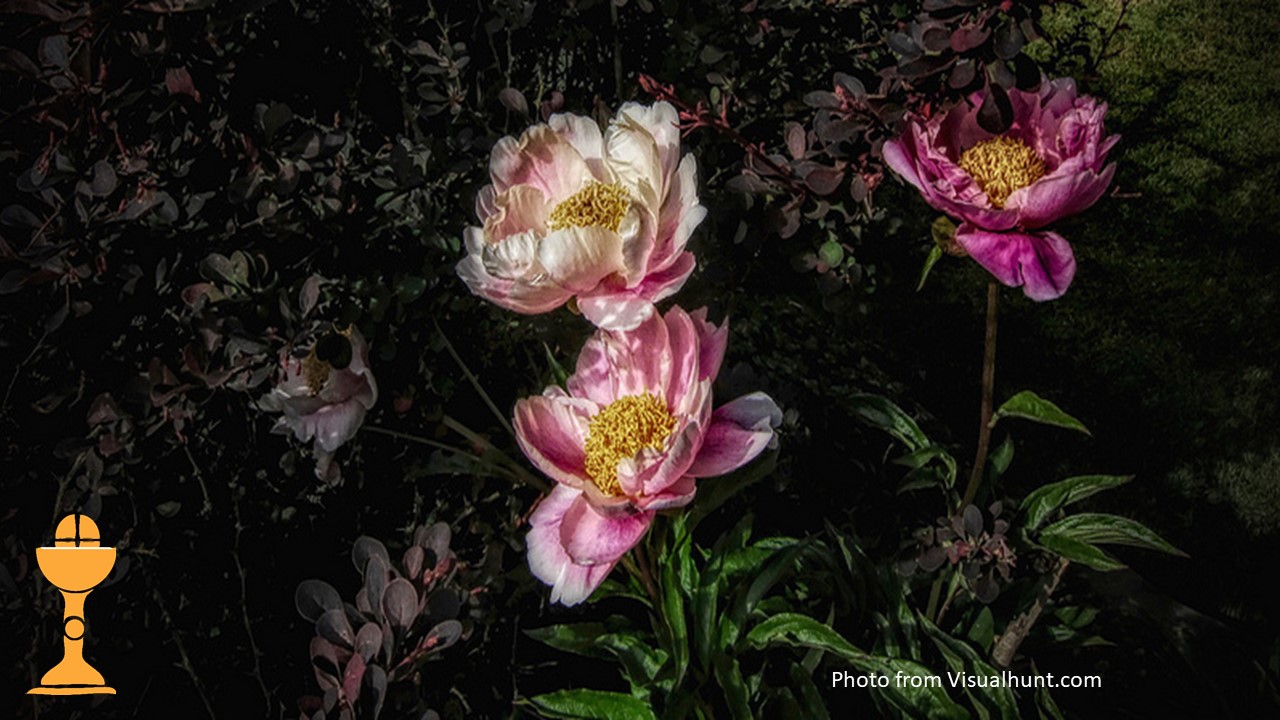 A definition of a Christian I like is that we’re to make flowers grow in a dark world. Are we doing that? Have you planted or shared any flowers lately? Have you done something else to make someone smile? To brighten up the world?

Philip Gulley, a Quaker Pastor in Indiana, is the author of some delightful and humorous books about life and ministry. In Front Porch Tales, he introduces us to Doc Foster, a man in the town in which he was raised. Doc wasn’t a physician. He was a trash collector and the only African-American in Gulley’s hometown.

For a dollar a week, he pulled up at our curb in his pickup truck, climbed out, threw our trash in the back, and drove away. If we forgot to set our trash out, he’d drive back to our barn and get it himself. When he had a truck full, he’d drive out to the town dump on Twin Bridges Road, unload, wet his finger, and put it in the air; if the wind wasn’t blowing toward town, he’d commence to burning…

Gulley goes on to tell of other “good deeds” done by Doc Foster such as helping college kids out with their tuition so that there could be more teachers in the community. He sums up Doc’s work this way:

When out-of-town visitors would complement us on our town’s cleanliness, we would swell with pride as if we ourselves had swept up the trash the dogs had scattered. Doc did what all good people do—made the rest of us look better than we really were.[1] 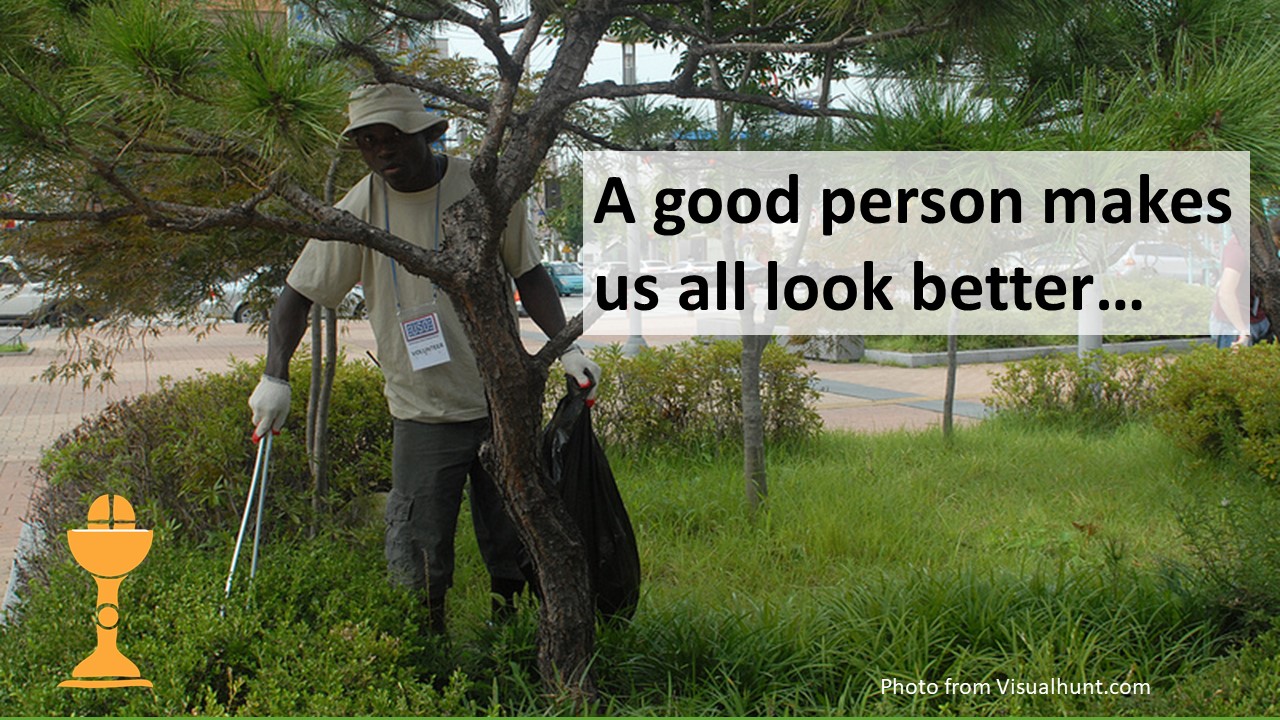 Did you catch that definition of a good person? A good person is one who makes everyone else look better. As followers of Jesus, that’s what we’re to be about. When we come to this table, we come as servants, serving the Lord and one another. We come as people whose purpose is to make others look better. But we don’t like to think ourselves that way, do we? We’re not alone, neither did the disciples.

Today we’re going to look at some of Jesus’ more difficult sayings. Let me put this passage in context. Jesus has just intervened in one of the disciples’ disputes over who was going to be the greatest. Jesus broke the news. If you want to be great, you have to first be a servant. Then he called forth a child and says, “Whoever welcomes one of these little children in my name, I will welcome.”[2] It’s a message the disciples have a hard time grasping, which we’ll see as we pick up the reading from there. Read Mark 9:38-50. 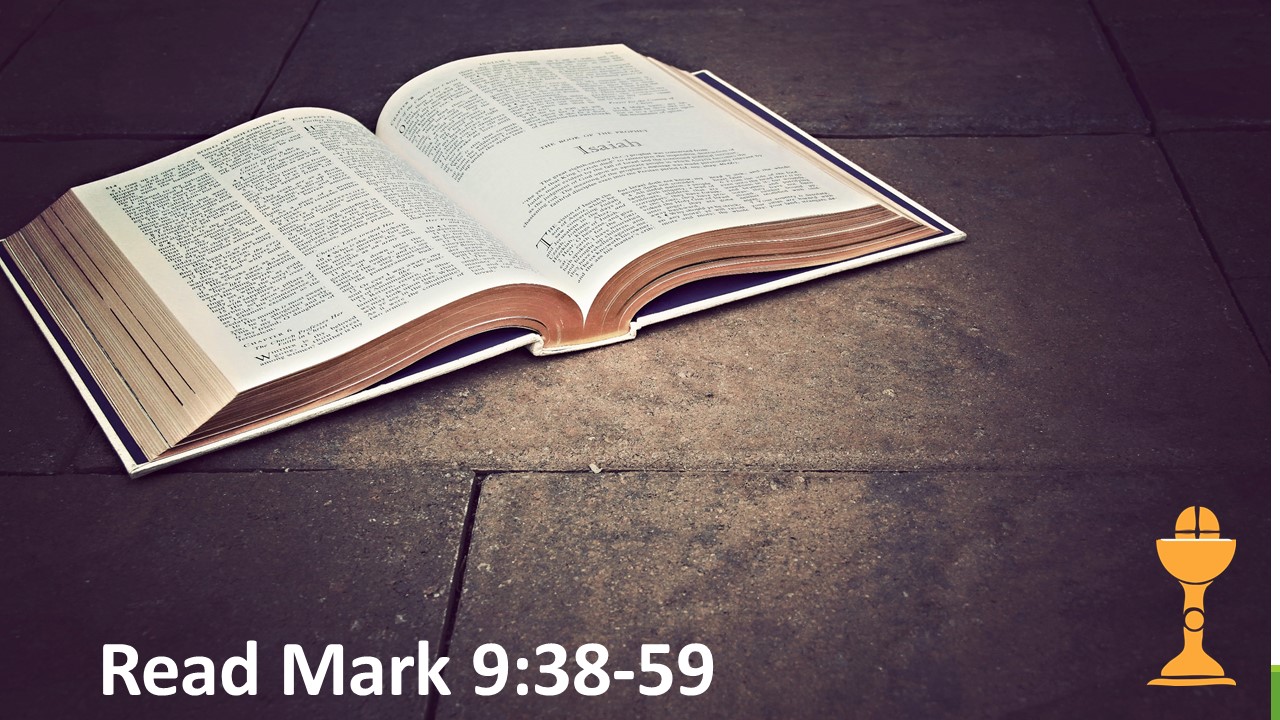 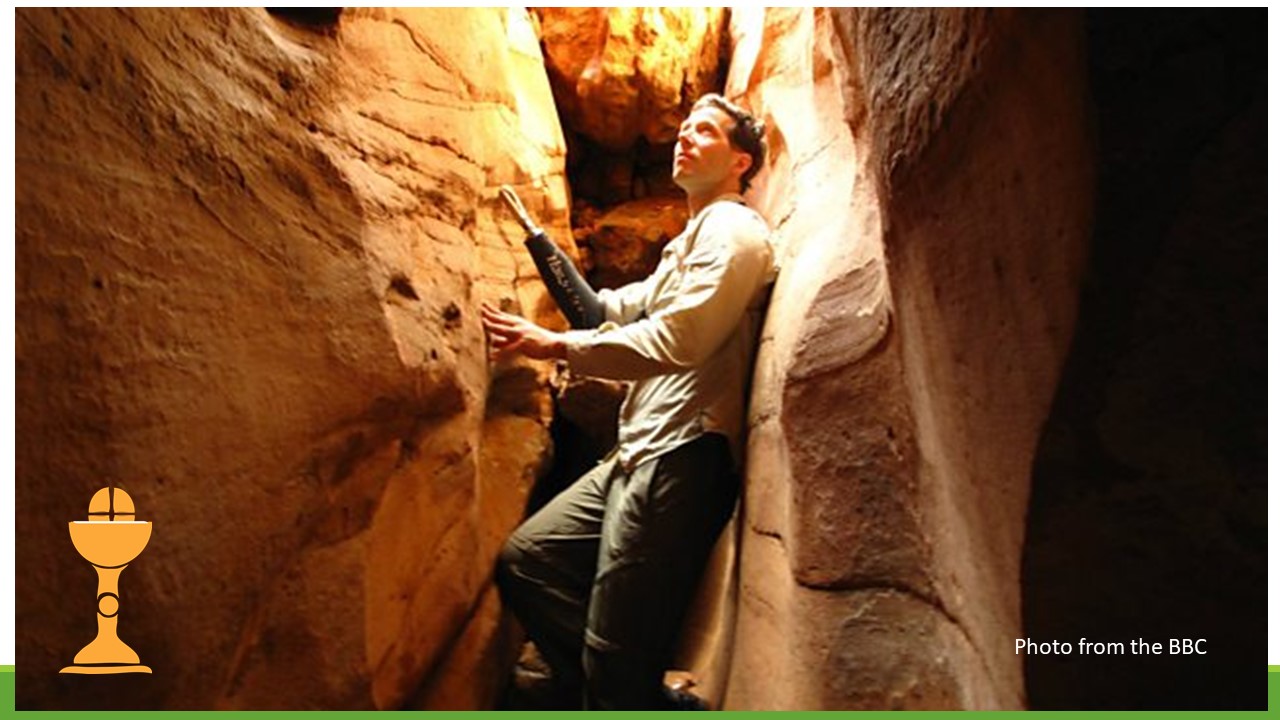 It’s been about a dozen years since we were all shocked at a story that came out Canyonlands National Park in Utah. A young solo climber, Aron Ralston, was descending into a canyon when an 800 pound boulder slipped and trapped his arm. He did everything he could to get free, but nothing worked. After three days, he ran out of water. On the fifth day, he made the drastic decision that saved his life. He rigged up his climbing gear so he could repel one-armed down the canyon as soon as he was free, tied a tourniquet to his pinned arm, and then, using his knife, amputated it.[3]

Aron was not the first person to perform such drastic measures in other to survive. In 1993, a fisherman in Colorado cut off his leg at the knee after being trapped by two large boulders while fishing in a remote canyon stream. Yelling for hours, no one heard his cries and the weather was deteriorating. Using hemostats from his fishing kit, he closed the severed arteries and crawled half-a-mile back to his truck.[4]

Such incidents cause many of us to wonder if we could do the same thing if caught in a similar situation.  I don’t know, but I know that being in such a position requires drastic action. If you want to live, there may be no other choice. And maybe that is what Jesus is saying in this harsh passage. 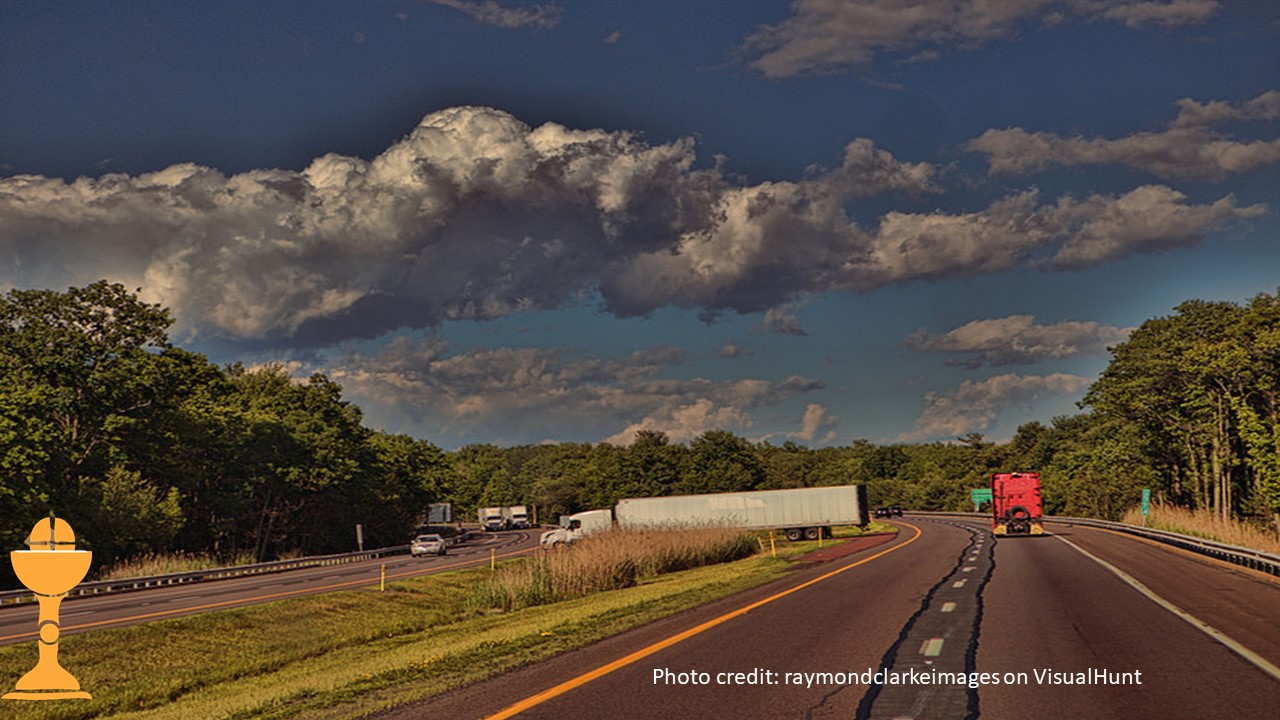 Sin, which leads to death, requires drastic action. Now I don’t think he means that we’re to actually cut off our hands or pluck out our eyes. After all, if you use such logic, that would mean if your sin begins in thought in your head, you should chop it off or at least sign up for a lobotomy. Obviously, Jesus’ intention isn’t to create a bunch of handicapped, self-mutilated Christians. That would go against Scripture’s teaching that our body is a temple in which we invite God to dwell.[5] So instead of taking this passage literally, we have to figure out what Jesus’ intention was here, what he’s trying to say. 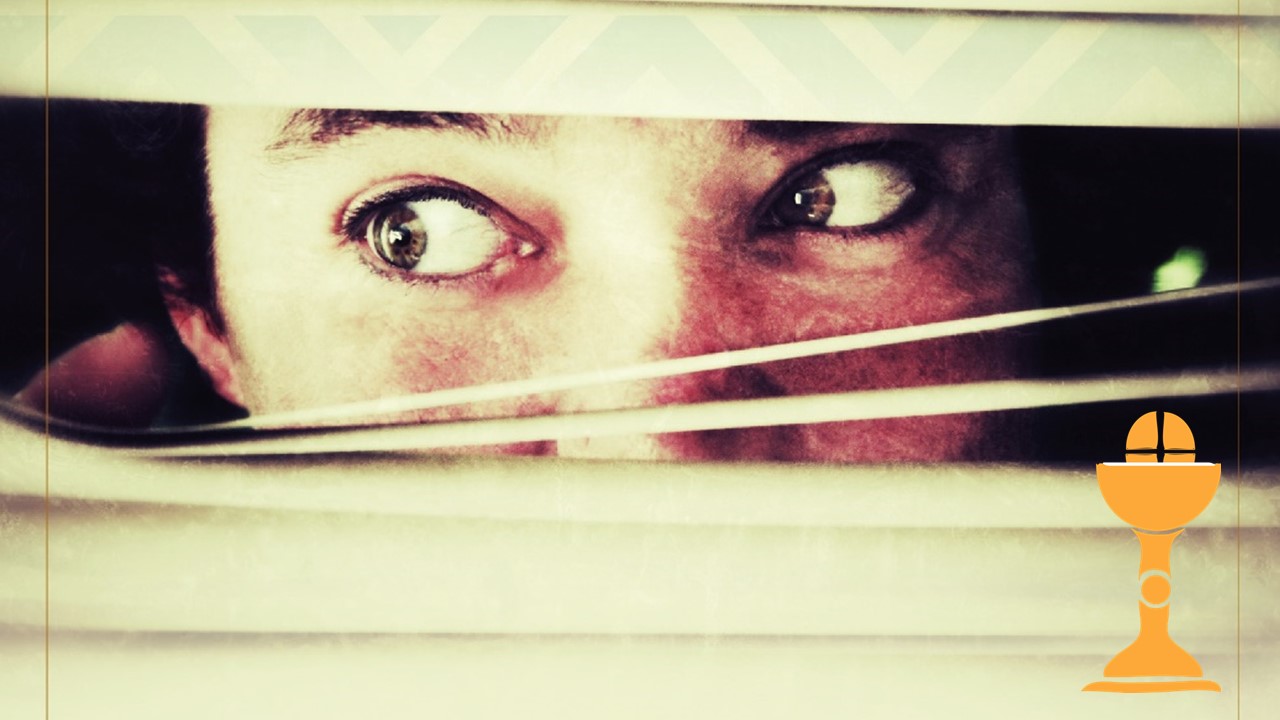 I believe Jesus uses outrageous examples as a way to get his disciples (and our) attention. Jesus is forcing us to deal with our own sin. If we look at this passage as a whole, from verse 38 through verse 50, we’ll see that Jesus extends charity to those who might have been considered “outsides” while putting a heavier burden on those who are “insiders.”  Another way of getting at this is Jesus’ saying that we’re to take the log out of our own eyes before we try to retrieve a speck out of someone else’s eye.[6] Let me explain.

Our passage starts with the disciples trying to look good. That should indicate something… Pride has this way of messing with us.[7] “Jesus,” John says, “we stopped this guy from using your name to expel demons. He wasn’t one of us so we set him straight.”

John’s expecting a pat on the back. “Way to go, John,” he expects to hear. “You’ve helped maintain my good name.” But that’s not what he hears! “Don’t stop someone from doing good,” Jesus says. 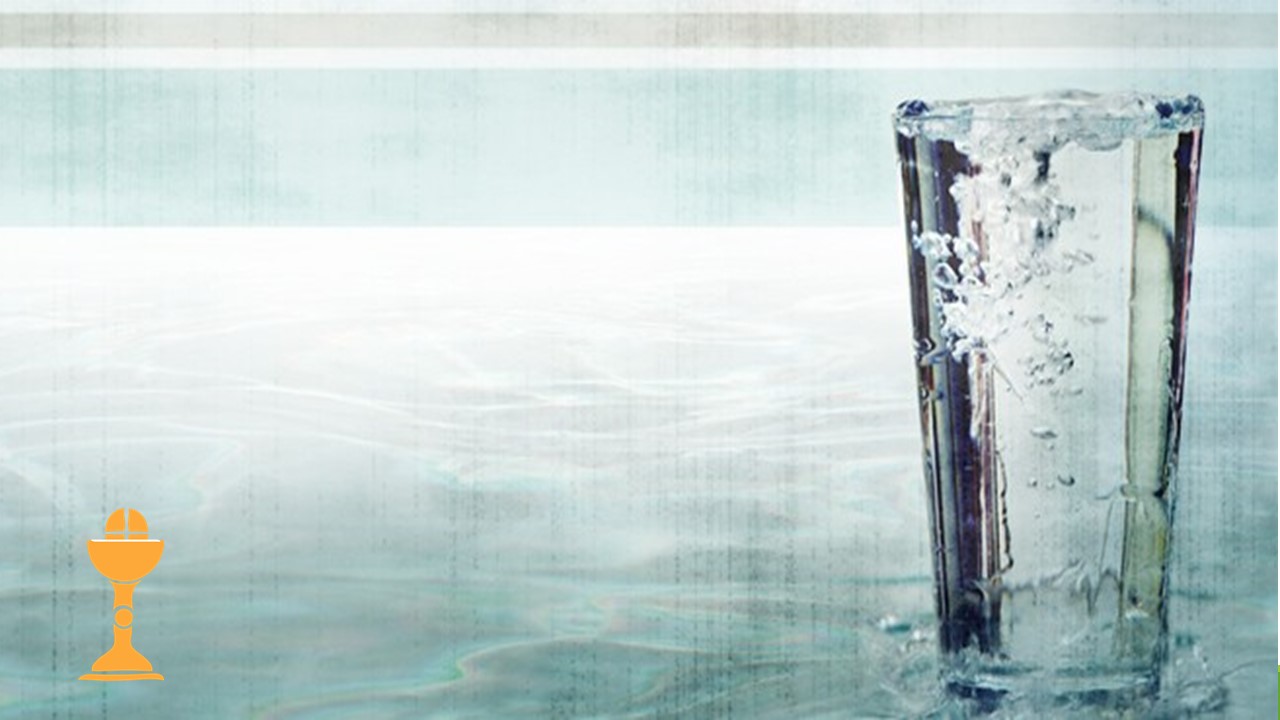 He then gives two examples. “If someone gives you a cup of water in my name, they’re on our side and God will notice their good deeds.” In the second example, he speaks of us giving a hard time to someone on the outside, or as it has been traditionally translated, “if you put a stumbling block in front of a little one who believes in me, you’d be better off to have a millstone tied to your neck and be tossed into the sea.” Such dreadful experiences might have been on the disciples minds for it is known that he Romans recycling worn millstones by tying them around the necks of their enemies.[8] The resulting consequences of these two actions may seem out of portion. A cup of water gets a nod from God, while tripping someone (we’re not even told that they fell), is serious enough that we’d be better off dead. Consider, however, what Jesus is doing here. He extends charity to those on the outside while setting up tougher standards for those who are on the inside. 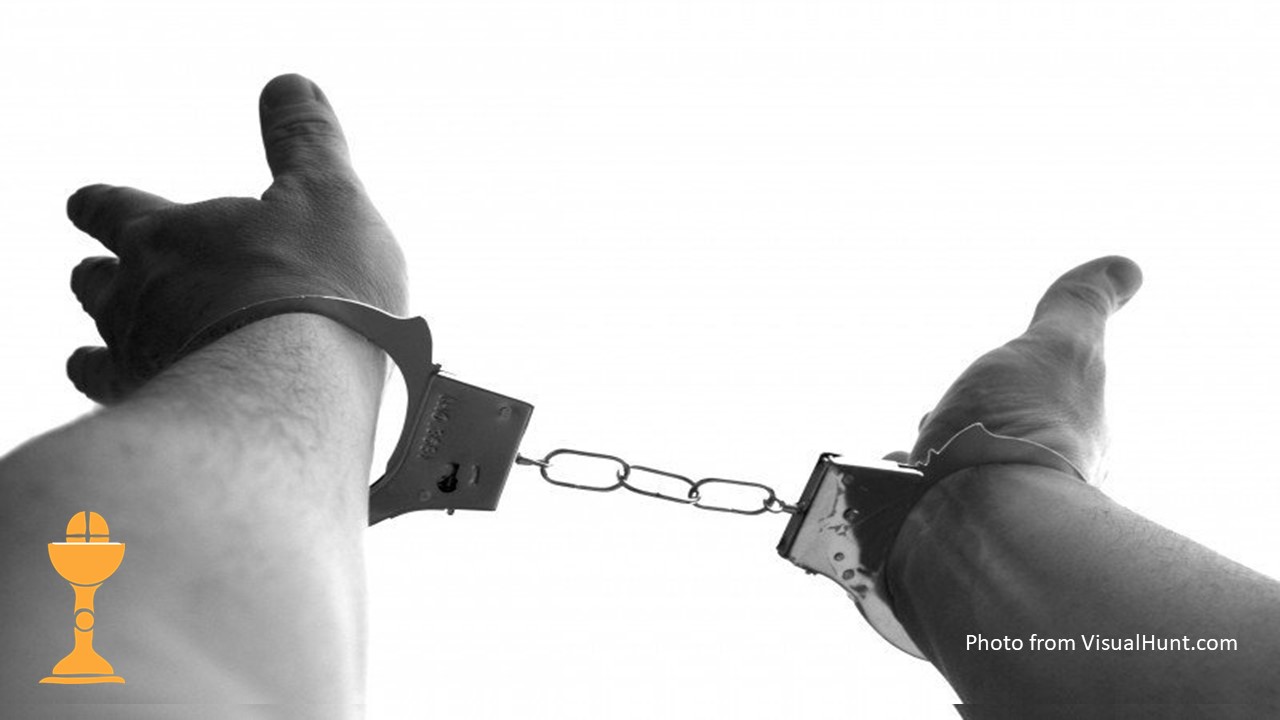 Jesus next gives a series of hyperbolic demands, commands that seem so outrageous. These are not given as an absolute requirement, but as a way to drive home a point. We need to take seriously our sin. “If your hand or foot causes you trouble, cut it off. If your eye distracts you, pluck it out.” Sin requires serious attention! “Don’t worry about who’s in and who’s out,” Jesus is saying. “Don’t spend your time worrying about the sin of others. Worry about yourself and what you can do to avoid sin.” Good advice, for we can only change ourselves. We can’t change someone else, a lesson all of us who are married should have learned a long time ago. But it’s a lesson that just doesn’t sink in very deep. 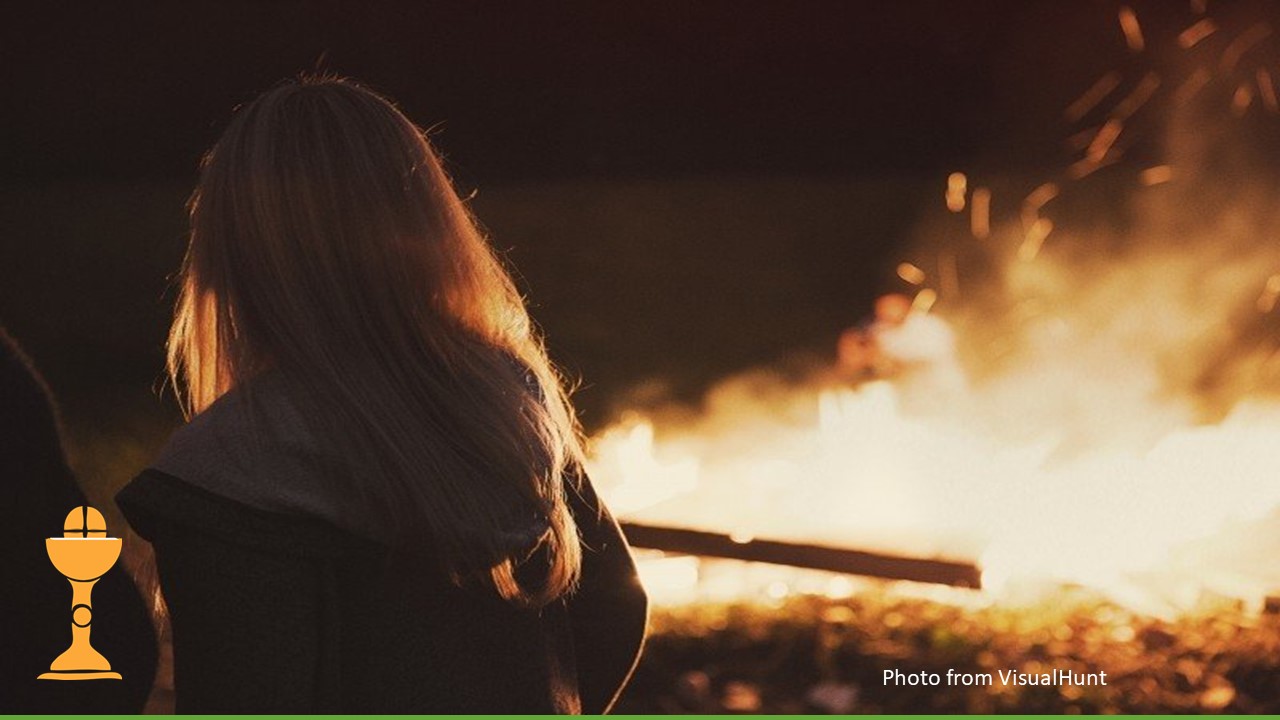 Then Jesus closes this section with a reminder that we all need to be “refined by fire.” Take actions to preserve yourself, we’re told and then preserve the peace with one another. Kind of an interesting way to end this set of troubling teachings, don’t you think?

Let me suggest a way for us to apply this passage. Jesus is saying that we need to go easy on others (those on the outside). If we should hard on anyone, we should be hard on ourselves. This will keep us humble. We need to avoid comparisons and thinking “my sin ain’t as bad as their sin.” That’s the logic of three-year-olds and politicians! If we go easier on others than ourselves, we avoid being hypocritical, a problem that seems to especially infect religious people.  If we harder on ourselves than others, we will be more gracious and humble and the church can become a place where people care for one another. We’ll be like old Doc Foster, making others look good! 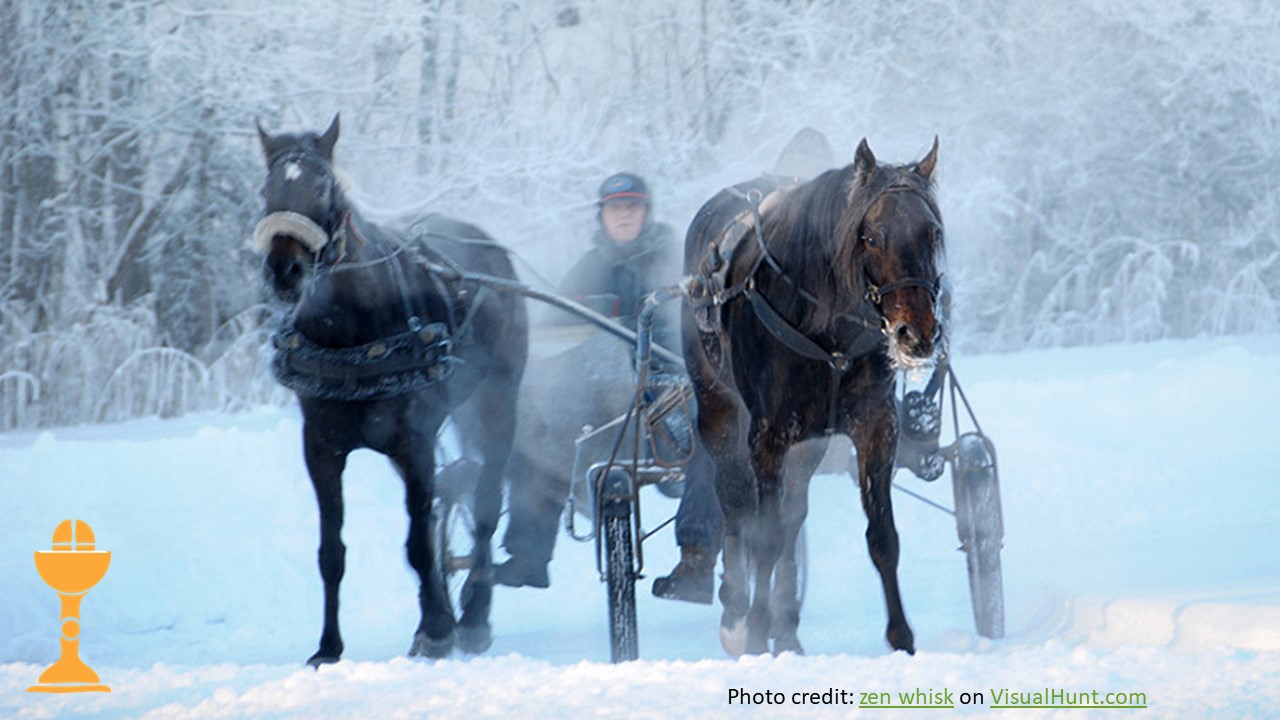 Karl Barth, the great Swiss theologian, had a favorite story about a horseman who became lost in a snow storm. Spurring his horse on, he galloped across a frozen lake. Later, in the comfort, warmth and safety of home, he learned of his fool-hearted action and how he galloped across thin ice. The man then broke down in horror and fright. In a way we’re to be like that. For you see, it’s only after the horseman was saved that he realized his peril.[9] That is also true for us. We realize the danger once we have experienced the grace.

I hope you know that sin leads to death, but that you also know that we are to let our sins die on the cross as we accept God’s grace, love, and forgiveness that’s offer through Jesus Christ.[10] 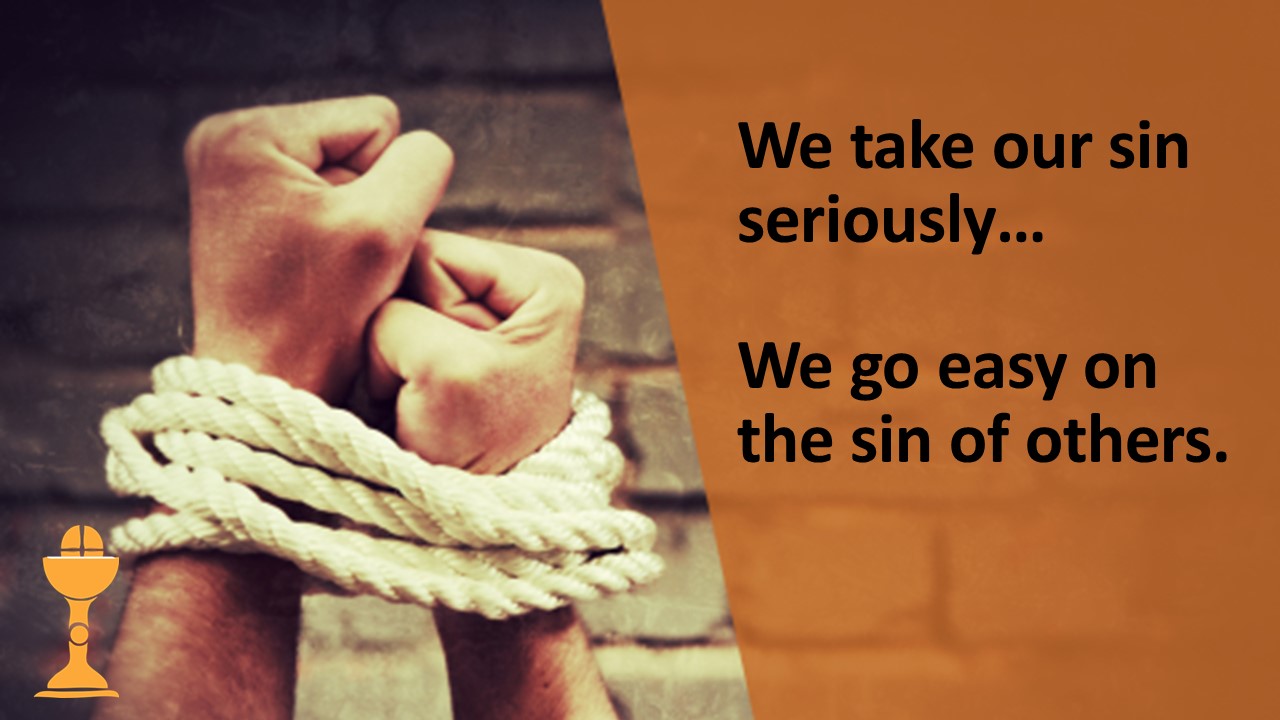 Yes, we should take our own sin seriously. But we should also go easy on others and their sin. By living this way, we’ll be making the world a better place for all. Amen.