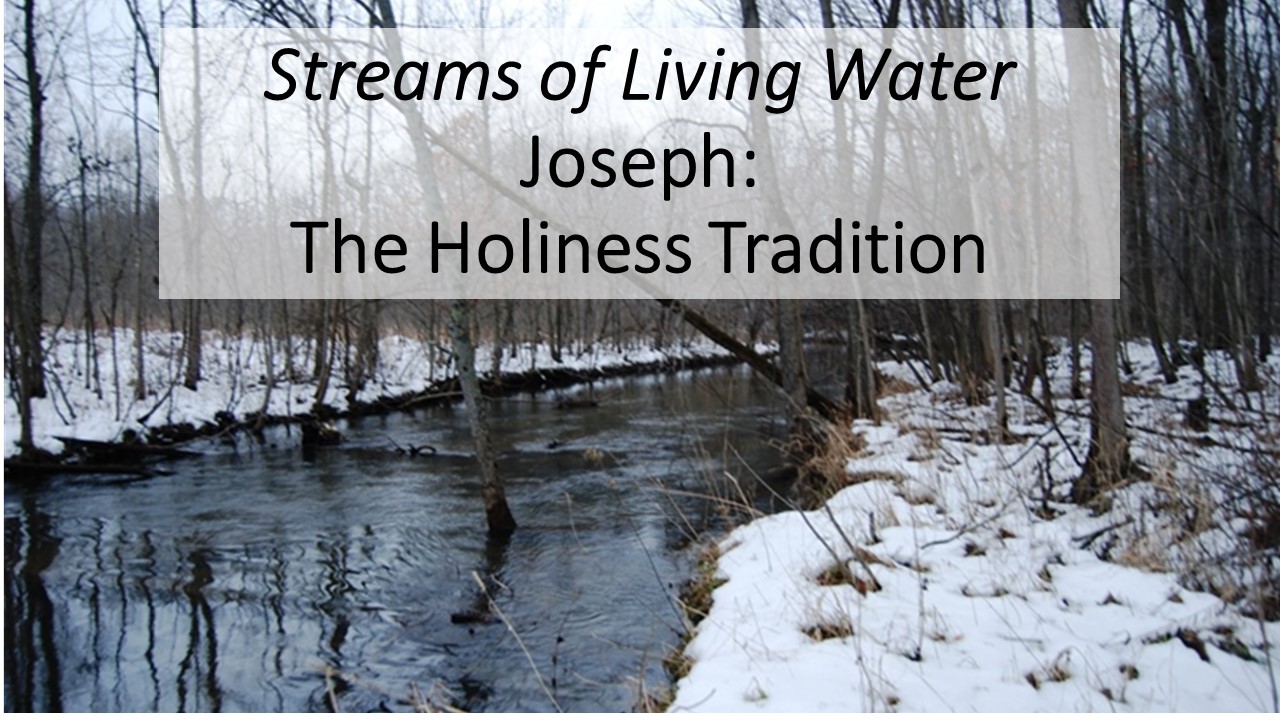 This Advent and Christmas season we’re exploring seasonal scripture passages through the lens of various traditions in which we encounter and respond to God. As I pointed out last week, the way we experience and respond to God are not the same. We started with Mary and the Contemplative tradition. This week we’re going to look at her husband, Joseph and the Holiness tradition. 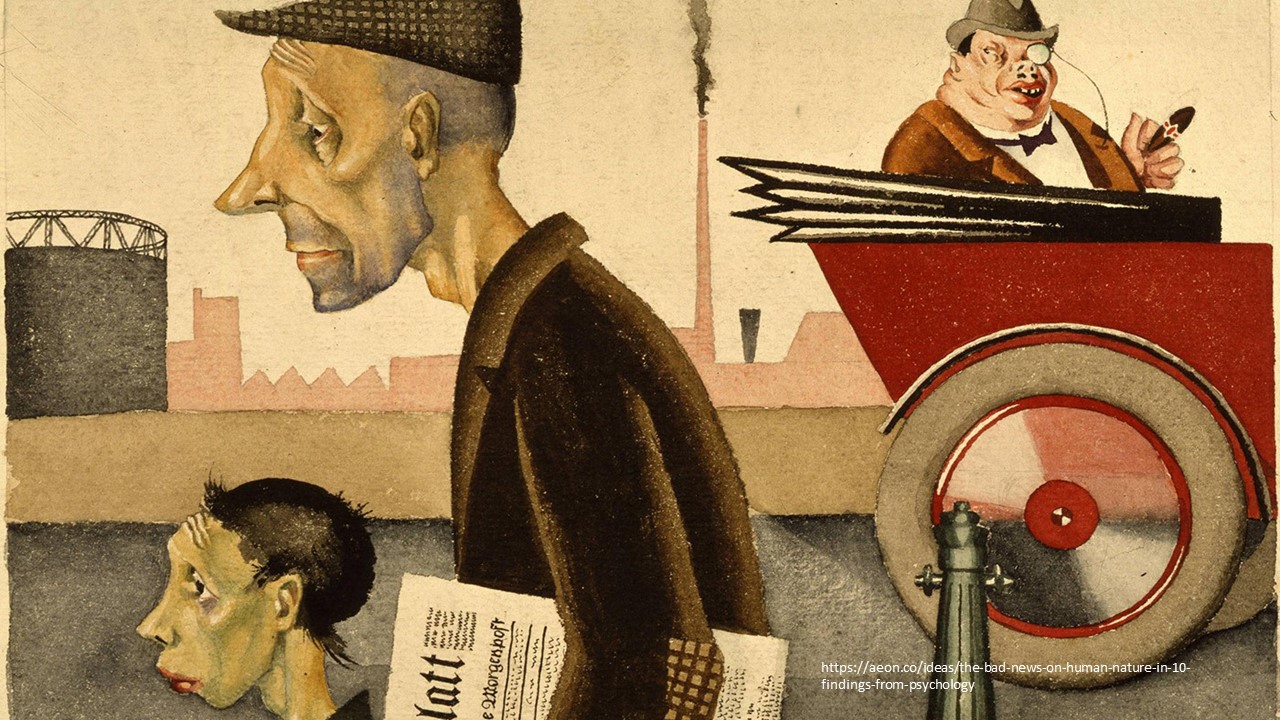 For Presbyterians, a church within the Reformed Tradition which emphasizes on the sovereignty of God and human sinfulness, holiness might seem a stretch. I was reminded of this earlier in the week when I read an article recommended by David Brooks of the New York Times and author of The Road to Character. The article was based on a psychology study from Great Britain that highlighted what I might call “the roots of our depravity.”[1] Had it been a theology article, it might have ended with hope. Despite our failings, God hasn’t given up on us—that’s the good news of Christmas. Instead, the article was a little bleak. That said, holiness is still our aim.[2] But we have a ways to go. 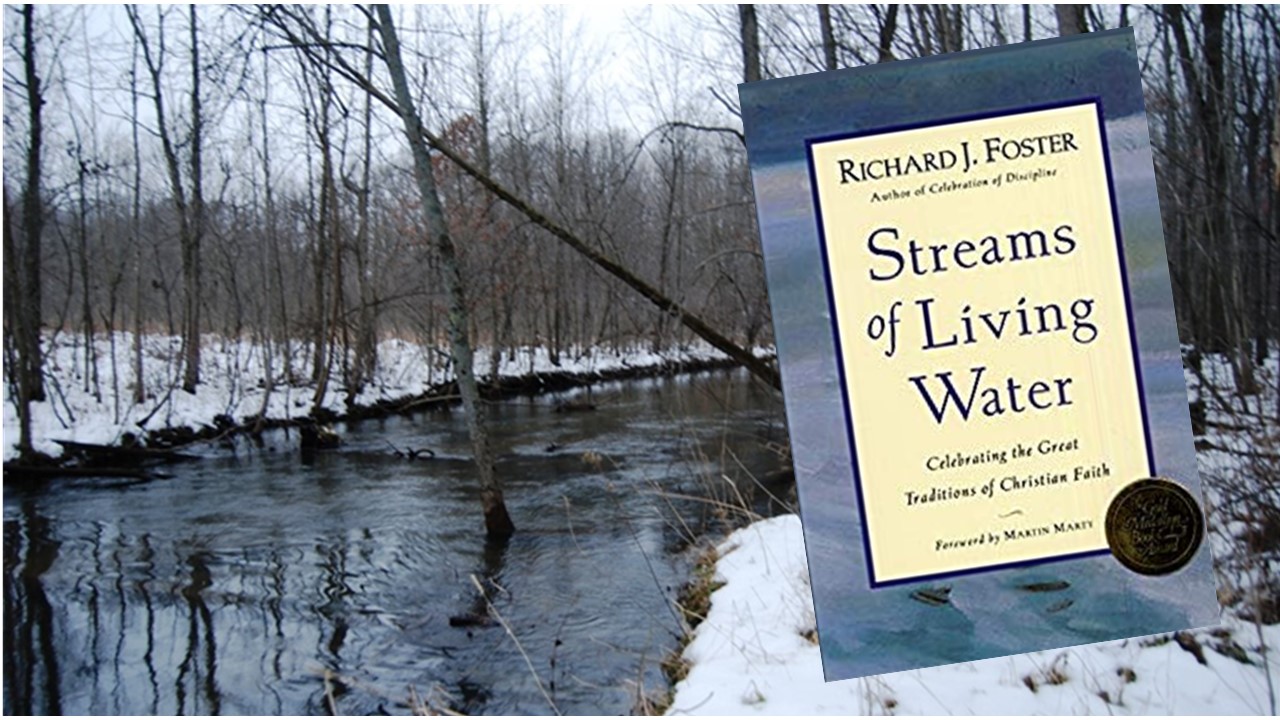 The six streams or traditions we are exploring this season are from Richard Foster’s book, Streams of Living Water: Celebrating the Great Traditions of the Christian Faith.[3] While not all traditions apply totally to us—and I’m sure there are very few here who feel exceptionally holy—it’s important to understand that all of these streams have Biblical foundations. Even if we might not draw heavily from one of these streams, we can learn from them. Our Scripture for today’s sermon is the Christmas narrative in Matthew’s gospel. Read Matthew 1:18-25. 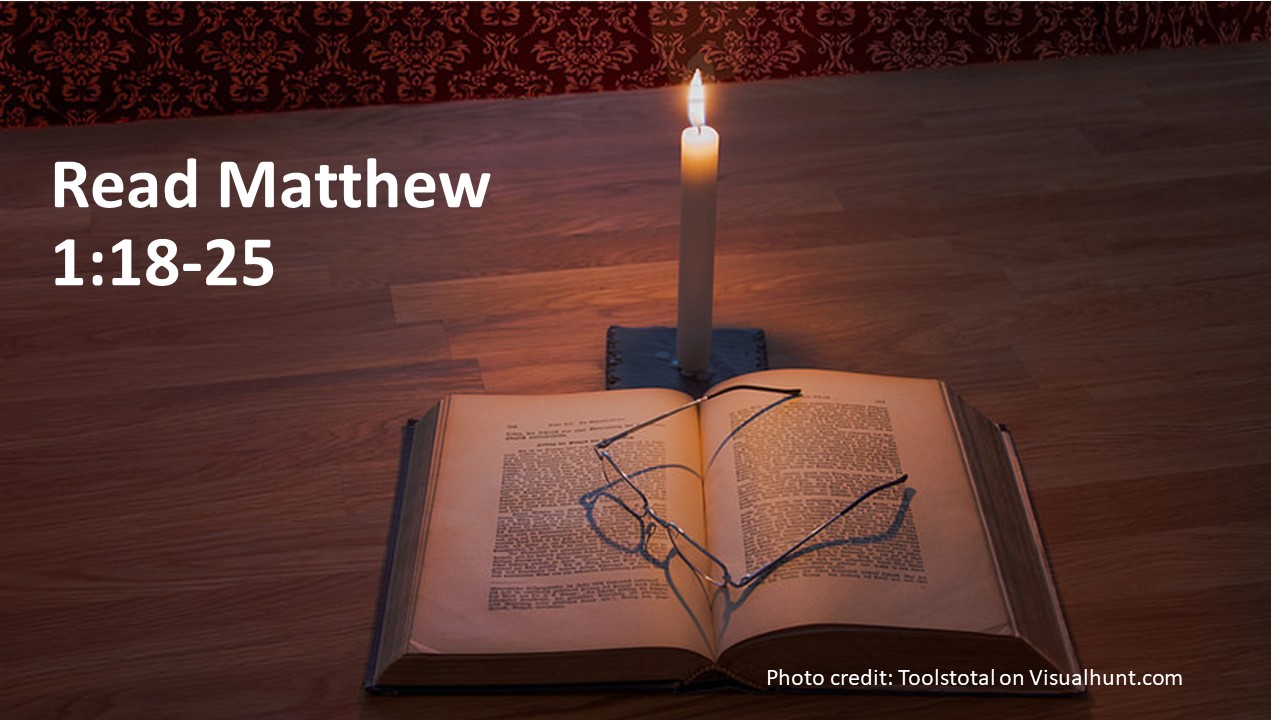 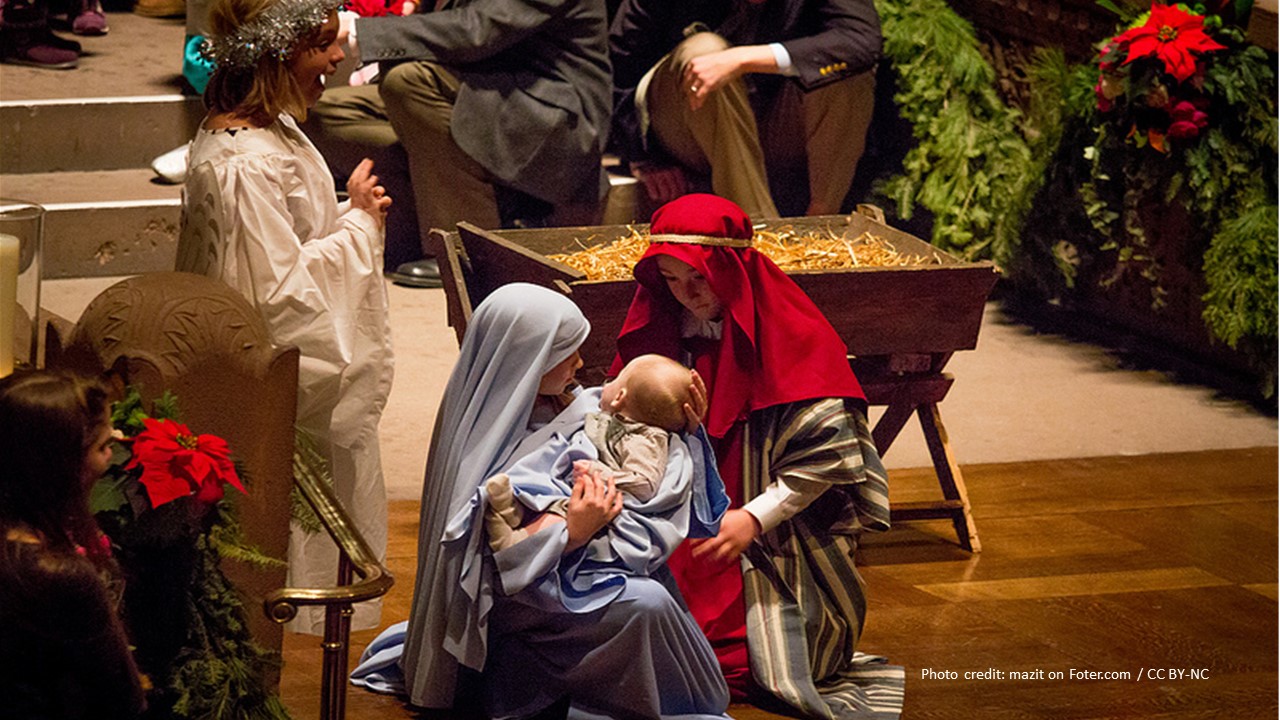 There was a youth group once doing a Christmas pageant. These were older kids who had not learned their lines so there was a lot of improvising. On the day of the pageant, Joseph with his pregnant wife, Mary, a pillow stuffed under her dress, stumbles up to the door of an inn. There was a sign that clearly said, “No Vacancy.” Joseph knocks anyway. A rude innkeeper barges out, points to the sign, and asks, “Can’t you read.” “Yes,” Joseph says, “I can read, but we are so desperate. Can’t you see that my wife is pregnant?” “Well, that’s not my fault,” the rude innkeeper shouts. “Well, it ain’t mine, either.” Joseph responds. 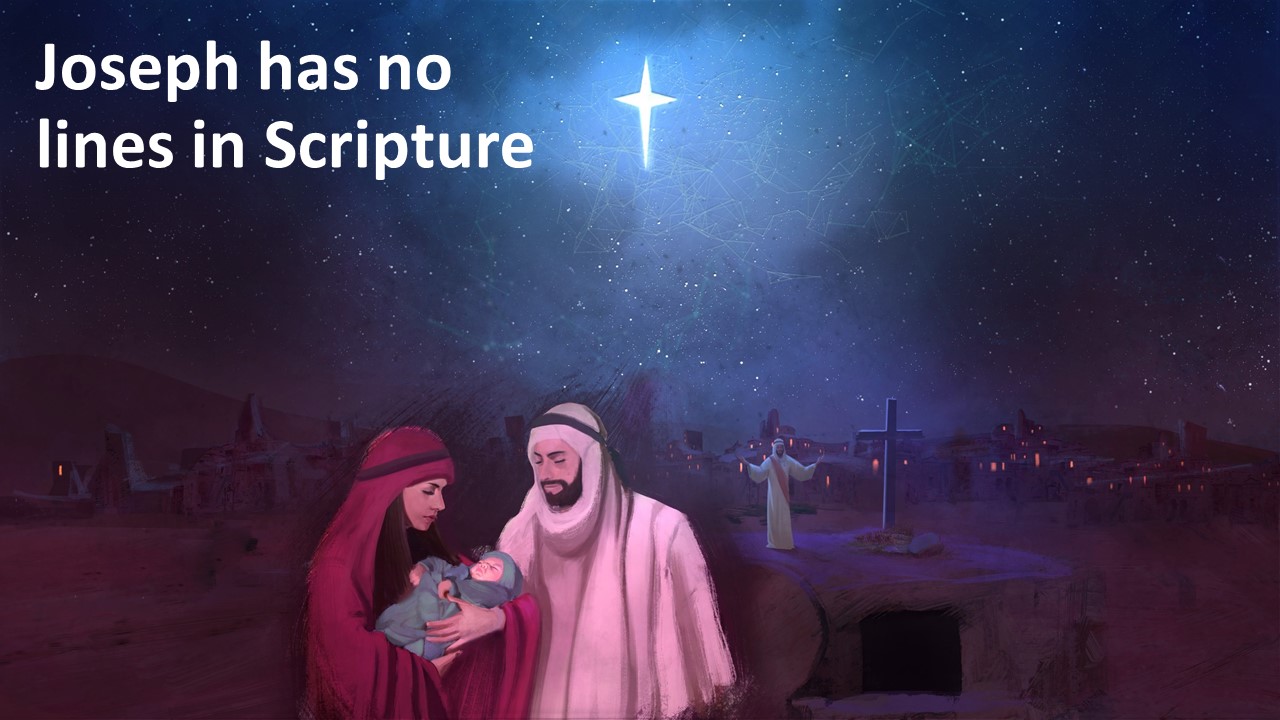 Actually, Joseph is the quiet one. In scripture, he’s not given any lines, including a snarky one like the improvising Joseph in the pageant used. Of course, he had to ask if there was a vacancy, but we’re not provided with the words of his question. We’re not told about what he said to the magi or the shepherds, although we can assume he talked to them. Instead, in Luke’s gospel, he’s shown leading leads Mary to Bethlehem. Later in Matthew’s gospel, when God speaks to him through a dream, warning him of Herod’s plan to kill baby boys, Joseph gathers his wife and child and flees to Egypt, beyond Herod’s reign. Although Joseph makes numerous appearances early in the Gospels of Matthew and Luke, and is mentioned in Mark’s gospel, he never speaks.[4] More importantly than speaking, Joseph listens, and when he hears God’s voice, he acts. As we all know, actions speak louder than words. If we are full of praise for God and treat others with contempt, we’re not living a holy life. We’re hypocrites.

Back to Joseph. He becomes a lost character in the drama around Jesus’ birth. In a sense, he’s only the stepfather of Jesus.  Yet, he truly cares for the son entrusted to him. In the gospel of Luke, we see Joseph being amazed at the prophecies concerning Jesus following his birth.[5] He beams with pride. We often think about the task God assigned Mary and are amazed that such a young woman could be so competent. But Joseph also has an important task: keeping his family safe from Herod’s henchmen and helping Mary search for the lost Jesus in the temple. Interestingly, every glimpse of Jesus as a child, Joseph is present. But Jesus grows up and Joseph drops out of history. Did he die? Was he left behind to keep the family’s carpentry business going? We don’t know.

But Joseph plays an important role in Jesus’ birth and early life for he’s a vehicle through whom God communicates. He’s the earthly father who looks out for Jesus’ welfare and raises him safely to adulthood. Joseph is an example of someone seeking God’s will, and for that reason he’s an important person for us to study and learn from and see what we might gleam from his struggles. 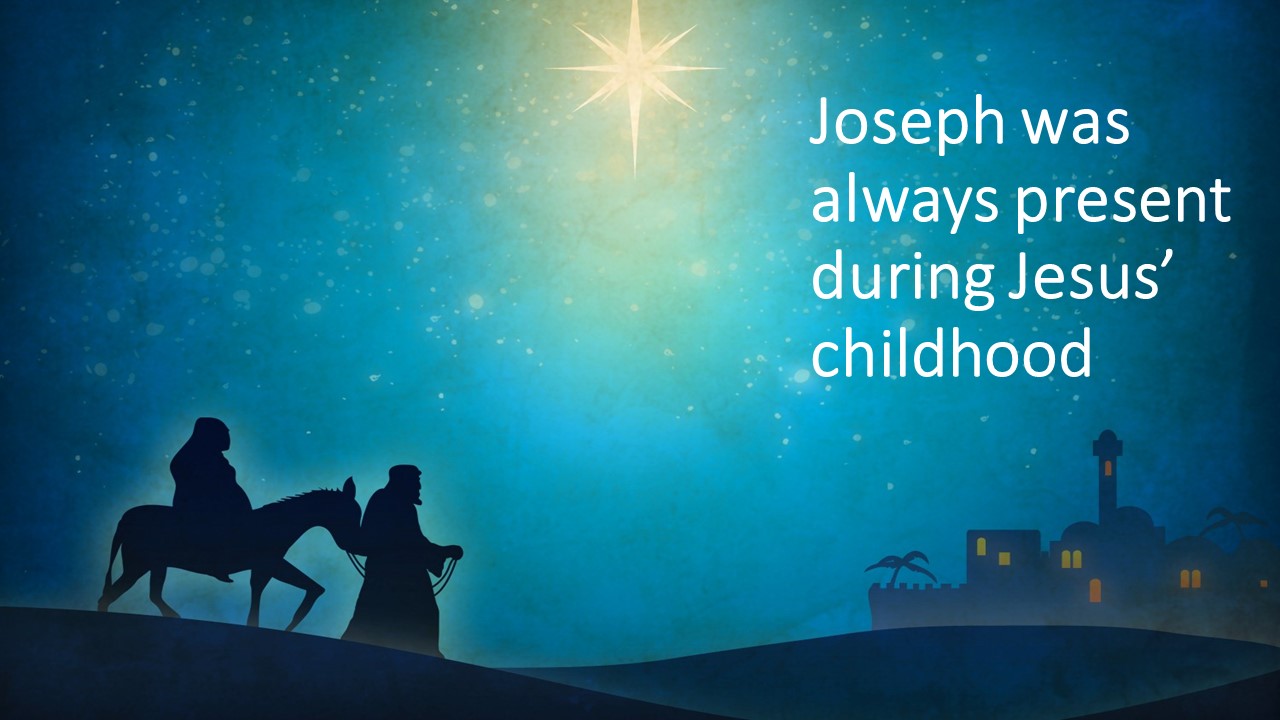 Can you imagine the conversation Mary had with Joseph: “Do what? You’re what? By whom? How?” The news came as a surprise. The woman he was engaged was pregnant and he wasn’t the father. Matthew doesn’t tell us Mary’s side of the story, only Joseph’s. Taking Matthew’s account at face value and not peeking over into Luke’s gospel, we cannot be sure if Mary knew the divine nature of her pregnancy at the time she tells Joseph about her condition. Joseph only learns about the divine nature of Jesus from a dream.

For a minute, go back before that dream. Think of how you would feel if your fiancé dropped such a bombshell… If we can put ourselves into such a position, we might begin to get a sense of the hurt and humiliation Joseph must of felt.

Even though Joseph probably felt about as tall as an ant when he received the news, he’s still a good man. Scripture tells us that Joseph didn’t want to publicly humiliate Mary by exposing her pregnancy—an action that might have resulted in her death by stoning—as is still sometimes done in that part of the world. Yet, if Mary was exposed, then people would feel sorry for poor Joseph, who had been wronged. They might even be those willing to set him up with their own daughters. But Joseph was a man of grace. Instead of taking the route of vindication, Joseph swallows his pride and decides to take care of things discreetly so as not to embarrass or endanger Mary. 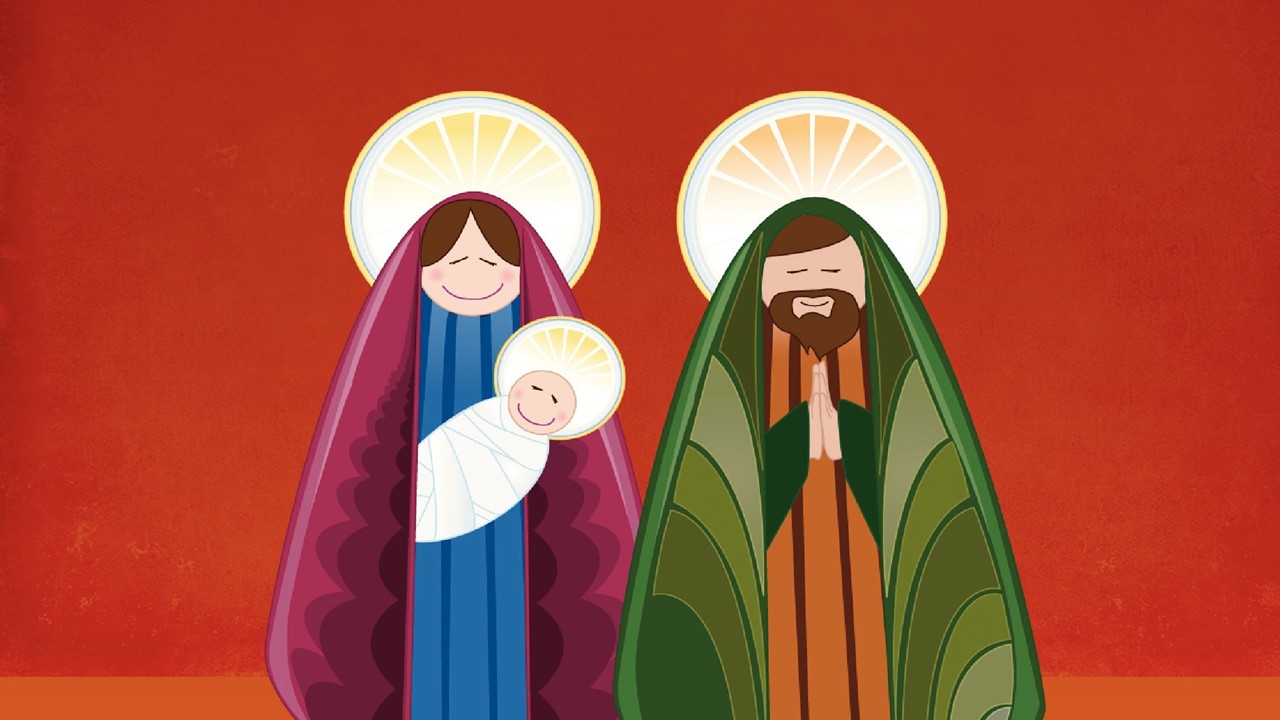 The insight we have of Joseph’s thinking about how to respond to this situation shows us that holiness isn’t just abiding by the law. For the law provided Joseph a way out. His willingness to “do the right thing” and protect Mary is an indication of his holiness. Instead of following the law to the letter, Joseph wants to do what was right and best for all involved.[6]

Holiness, as defined by Richard Foster, isn’t perfection. Perfectionism along with works-righteousness are some of the dangers of over-emphasizing this tradition.[7] Instead, it’s doing the right thing. It’s developing habits that foster virtue. It isn’t just about obeying rules and following regulations, but about having the right attitude in our heart that guides us to do what’s right. “A holy life simply is a life that works,” according to Foster[8] 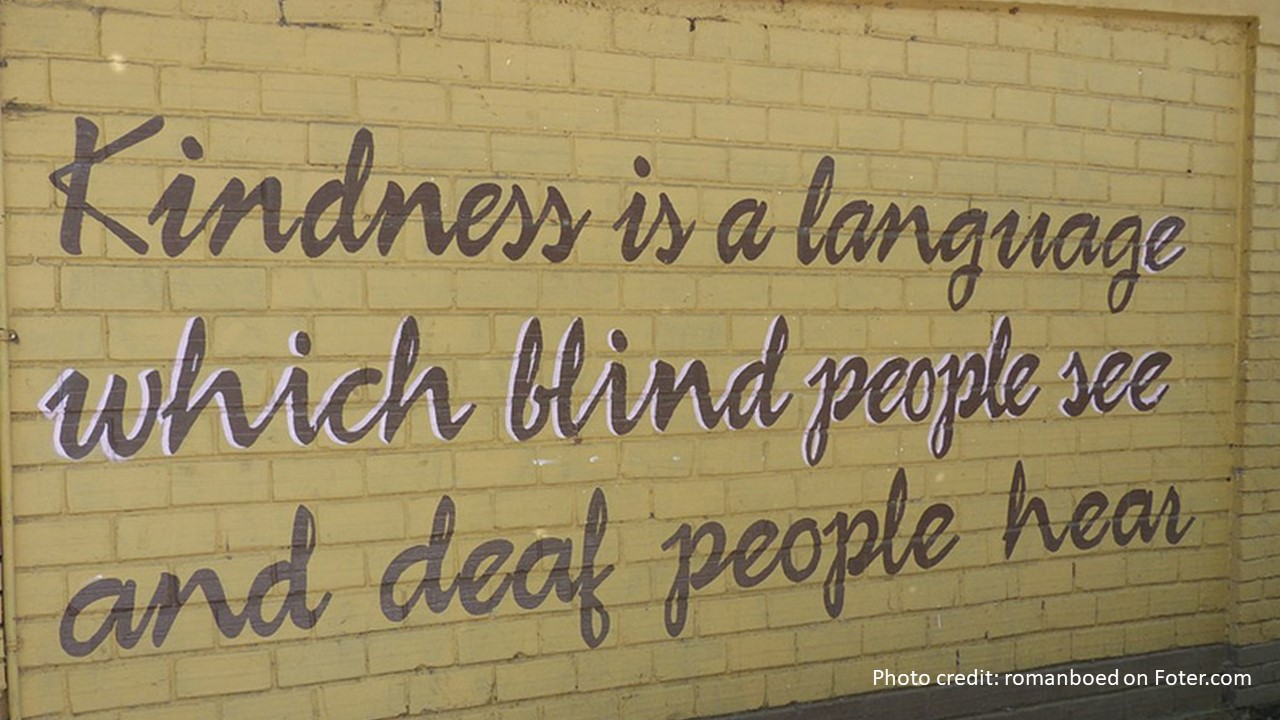 We foster a holy life when we strive to develop a deeper relationship with our Savior. It’s been said that the “goal of the Christian life is not simply to get into heaven, but to get heaven into us.”[9] Striving for Holinesses helps develop character. As we improve our spiritual life, the results will be seen by those who are around us and the world will become a better place. So it’s not just about trying to stay off Santa’s bad list, it’s about becoming there best person we can as we allow Christ to redirect our hearts. To recall a theme of the late President Bush, we are to be one of those “1000 points of light” shinning in the world. 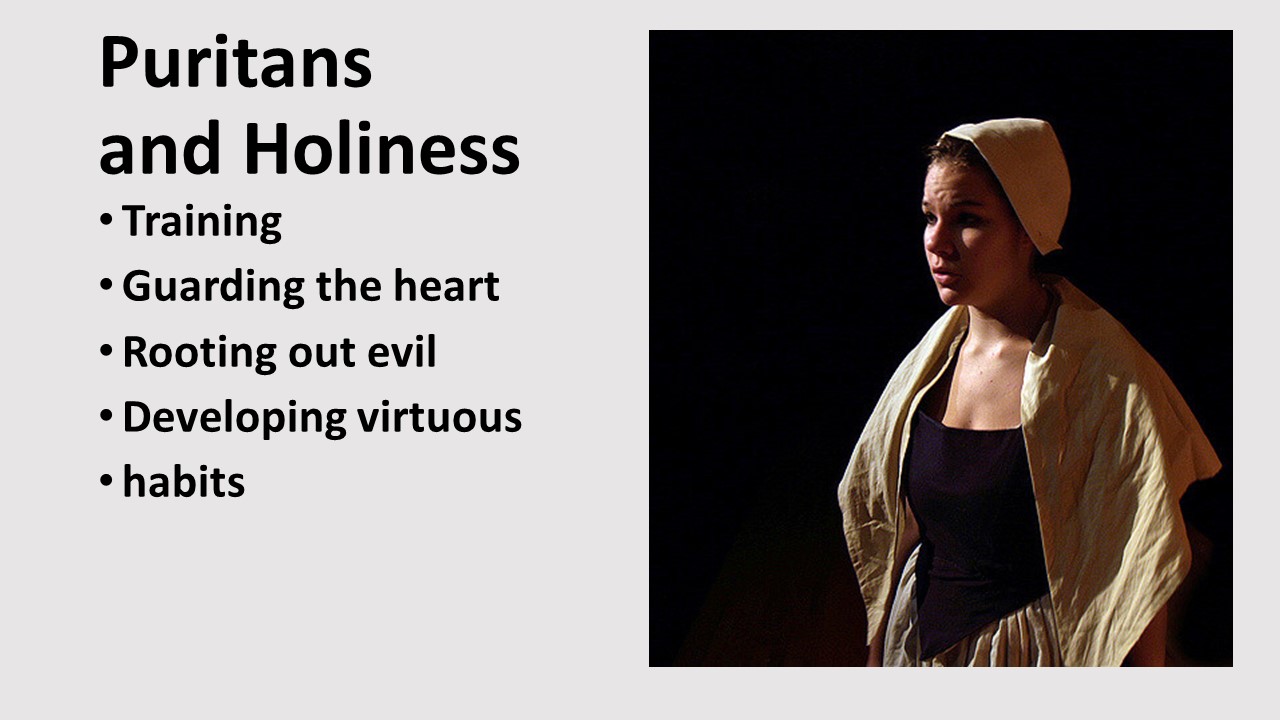 There are a number of denominations that refer to themselves as “holiness,” most of whom came out of the Methodist tradition in the 19th and early 20th Centuries. However, despite my early comments to the contrary, there was also a group within the Reformed tradition that placed a lot of emphasis on holiness: the Puritans. They emphasized training, guarding the heart, rooting out evil and replacing it with goodness, and developing virtuous habits.[10] Puritans were known to keep journals to help them along this tasks and interestingly, such journals, have been suggested to being the forerunner to the modern novel. 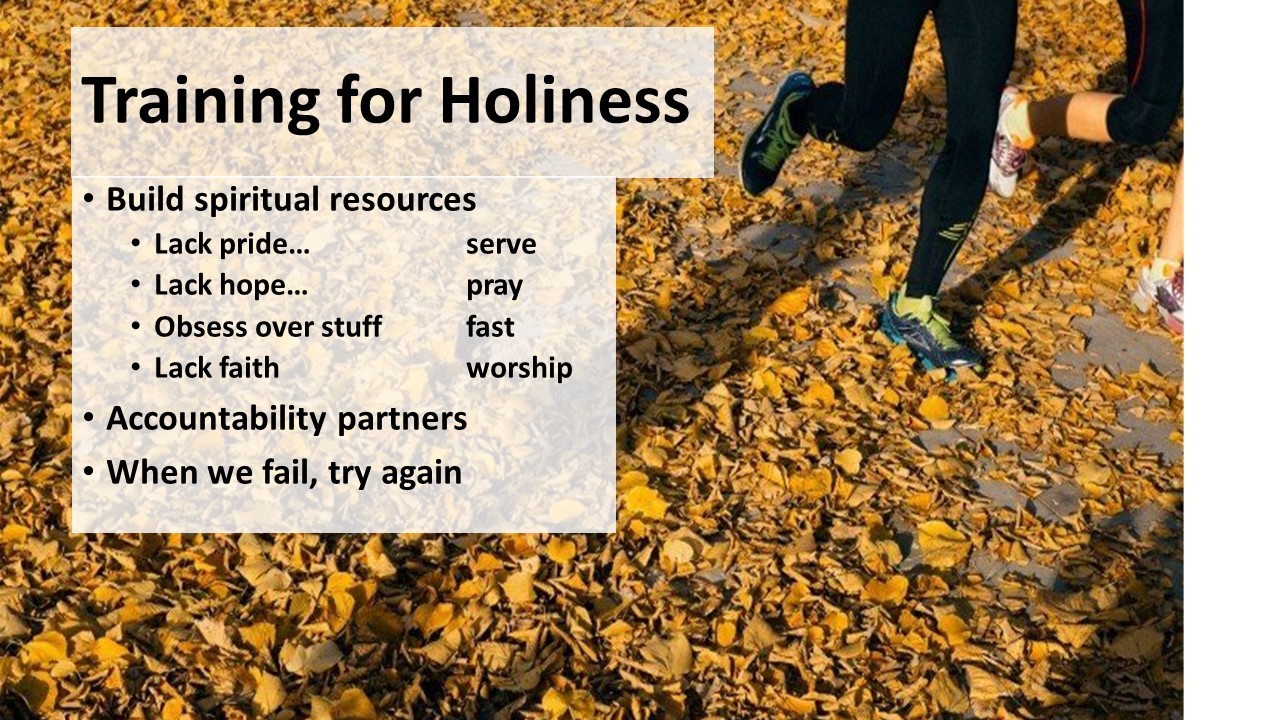 We are given no insight into how Joseph developed his holy life, but there are some ways we can gleam truth from this stream within the Christian faith. First of all, we must train ourselves and build up the spiritual resources necessary so that when the moment arises, we will do what’s right. If we struggle with pride, we need to immerse ourselves in service. If we lack hope, we need to develop a prayer life that draws us into the life of God. If we obsess over possessions, we should fast and learn to do without. If we lack faith, we should worship and focus on what our God has done for us in the past as we anticipate what God is doing in the present and future. With other struggles, we should seek out friends and mentors to be accountability partners. And finally, we must remember that we are not perfect and when we fail, we need to embrace the forgiveness offered by Jesus, brush ourselves off, and get up and start over.[11]

Ultimately, we should remember that while we will never be completely holy (or sanctified) in this life, [12] we follow one who is holy. Jesus is holy. As the Bible says, God is purifying us.[13] One day, not in this life, we will be perfected, and for that we should rejoice. Until then, we live in faith.

As for what we can learn from Joseph… Listen to God and act on what we are told, actions are more important than speaking. Amen.

[4] In addition to his appearance in the opening chapters of Matthew and Luke, Joseph is identified as a carpenter in Mark 6:3.

[7] Foster lists pitfalls for each of the Streams. Those for holiness include legalism, Pelagianism (attempting to earn grace), and perfectionism.  Foster, 91-94.