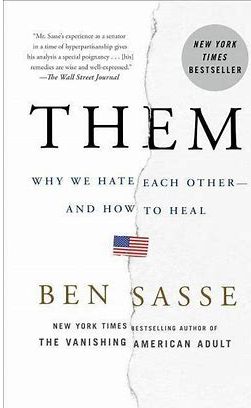 One would need to be deaf and blind not to realize there are serious problems in American society. Instead of rationally discussing issues that divide us, we join polarized camps and dismiss those with whom we disagree. We use unflattering names or spread false rumors about those we see as opponents. Instead of debating topics of concern, we yell at those with different views. It’s as if we believe that the one who yells loudest is right, which is absurd. Instead of looking for common ground upon which we might build a relationship, we use perceived differences to Balkanize ourselves into camps of like-minded people. And when we are only around those who look, think, and act like us, we just confirm our preconceived biases. And there is no doubt that 24-hour cable news and the algorithms of social media have only strengthened this divide. We no longer watch the same news programs and entertainment, nor read the same authors and newspapers. Instead, with a world flooded with information, everything comes tailored for us as individuals. This whole system, according to Sasse, makes us very lonely.

I was a little shocked when I began reading this book on how divided America is to read Sasse’s critique of America culture and how our problems stems from loneliness. I did wonder if he makes more out of the problem of loneliness than it deserves. He also suggests that the decline of the traditional home as another reason for society’s problems. I hope his ideas are debated. Perhaps they can play a role in building a more civil society. That said, there are critiques he makes that will make everyone a little uncomfortable. He challenges an article that identifies the genesis of nasty politics from the 1994 election and Newt Gingrich. Sasse suggests that Gingrich was only a backlash of nasty politics of the Democrats against the Robert Bork nomination to the Supreme Court in 1986. (Personally, I’m old enough to think the issue goes back further than 1994 or 1986). But those on the right can’t rejoice, for in the next chapter, he challenges Fox News and suggests they profit greatly from monetizing the fear. He particularly attacks Sean Hannity for not only preying on this fear and inciting rage, but also ignoring any evidence he finds inconvenient. By the time most readers with die-hard political positions, whether on the right or left, have finished the first half of the book, they’ll have found cherished positions challenged. Sadly, many will probably skip the second half of the book where Sasse suggests strategies for building bridges instead of walls.

Sasse grew up in a small town in Nebraska. It was a place with strong rivalries between towns and sports played a major part of these rivalries. He idolatrizes his father, who was a coach. He obviously grew up in a traditional family.  Sasse, himself, attended college on a wrestling scholarship. He would later earn a Ph.D. at Yale in American history and became the president of a small Midwestern liberal arts college. He also comes from a strong Lutheran Church background. His experiences with small towns, family, sports, religion, and education come together in this book as he seeks a way to bridge in the impasse that exists within American society.

Sasse’s eureka moment of his childhood came when he attended a Nebraska football game. There he was in the big house in the prairie, with 100,000 other folks, all in red, cheering on the cornhuskers. A few rows a way he spotted a group of people from a neighboring town that was a big rival of his town. These were folks his town cheered to their demise at Friday night football games, yet here they were, enemies, cheering on Nebraska. The problem caused by isolation (and loneliness) when we maintain isolation is that we fail to realize that we often have a lot in common with those we see as “them.” He learned from an early age that these folks from a rival school district weren’t really enemies. However, Sasse doesn’t suggest we end rivalries, for competition helps us be our best.

In the second half of this book, Sasse lays out several ideas on how we can begin to break down the walls separating us from them. In his first chapter in this half, titled “Become Americans Again,” Sasse provides a civics lesson about what should unite us. I found it refreshing to read a Lutheran who can write like a Calvinist as he calls for us to admit our that we’re all flawed. He encourages us to set limits on our (and our children’s) use of technology, to be more open to diverse debate within the university (an idea, he points out, that he and Obama agree on), and to develop roots while also exploring outside our own tribe. While most readers won’t agree 100% with the author (and I assume that would be fine with Sasse), Americans would be better off we seriously debated his thesis as we seek to breakdown the divides that separate us. This is a good book for all Americans to read (and maybe even those in Russia or China to read to learn more about what America should look like).