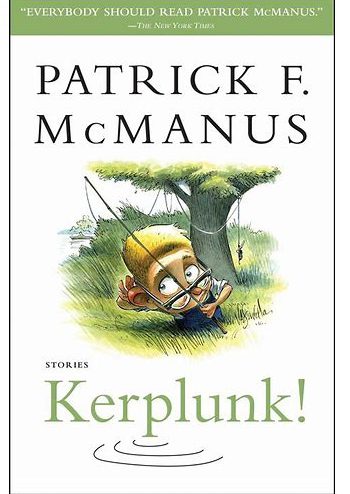 There is a favorite used bookstore in Wilmington, North Carolina that I often stop in when I’m home. This time I was looking to pick up another copy of Guy Owen’s The Ballard of the Flim-Flam Man to give to a cousin, along with any books by Archibald Rutledge (both Southern writers). I didn’t have any luck, but I came across a book by Patrick McManus that I had not read. I promptly purchased the book and read half of the stories that evening. All these stories had previously seen ink in Outdoor Life. They are funny and many have a good moral lesson, too. McManus has always been a bit of a curmudgeon. He longs for the days of old, when mountain trails weren’t so steep and there was more oxygen in air. He recalls hunting 80-acre section of land where the deer were seldom seen, but when he visited recently his old hunting ground, he sees that it’s not been developed into a gated community and the deer are plentiful, snacking on the shrubbery. The deer earing shrubs hit home! In these stories there are also good safety lessons, such as the purpose of hooking the safety chains on a trailer, because having your boat pass you on the highway us “one of the least pleasant sights you may encounter during your lifetime.” And McManus is also a master as self- deprecation, such as the time fishing for steelhead, his friend already had one on the line while he, having made a half-dozen casts, he hadn’t yet gotten his line in the water.  As for “Kerplunk”, you’ll have to read the book to find out. I do recommend McManus’ books!

I have enjoyed many of McCullough’s books (John Adams, The Wright Brothers, The Johnstown Flood) and while I enjoyed this book, it’s not one of McCullough’s best.  While the book is about the opening up of the Northwest Territory (which included the future states of Ohio, Michigan, Indiana, Illinois and Wisconsin), McCullough spends the first part of this book discussing how the territory came to be in the early days of the Republic. As the nation was broke, this territory allowed the country to pay the soldiers in the Continental Army with land. Of course, these former soldiers had to clear the land and fight for it, as the native tribes were not agreeable to giving away their land. One of the promoters of the territory was Manasseh Culter, a Congregational Pastor. He spent time in Philadelphia lobbying for the territory and would later travel westward into Ohio but would not move there. It was through Cutler’s eyes that McCullough tells of the passing of the Northwest Territory Act. After discussion of the passing of the act that opened the territory, McCullough focuses on those who establish the town of Marietta (which is located just north of the Ohio River, where Interstate 77 crosses). McCullough does a wonderful job telling the story of how the settlement was established, overcame the hardships of the early years, and became a permanent town.  I think he should have stopped there.

Where McCullough’s book fails is that he tries to tie his story through the middle of the 19th Century, which leaves many gaps in the story. By focusing only on Marietta and towns along the Ohio River, the reader is only given insight into one strand of settlers who poured into the territory. That said, I still enjoyed reading this book which my men’s book club read for its December selection.

Tai-Pan is a fictional account of the founding of the British Colony “Hong-Kong.” This is a long book. I listened to all the book and read some sections (as this is our January book selection for my book group).  While Clavell tells a good story, he seems to excel at foreshadowing, which means that when things happen there is little surprise. An example was when the Chinese lover of the Tai-pan was bitten by a mosquito, I knew she’d be coming down with malaria. Thankfully, Clavell doesn’t make a direct connection as, at the time (1842), it was thought that malaria came from “night vapors.” Clavell also seems to spend too much time in what goes on in the heads of various characters. People act or seem one way, but often have different ideas, which is especially true for the Chinese and their secret societies that even place mistresses so they can know what the British are up to. Clavell seems to embellish certain “kinky” sexual fantasies, from playful spankings of a lover to more harsh beatings and torture (he especially seems drawn to thumbscrews). I also felt he had a love for the sound of “reefed” sails. In his wonderful descriptions of sailing, he almost always has something to say about them being reefed (sails shortened due to excessive wind).

However, I did like how he worked in principles of economics, the advantage of free trade, the world views that tied together or put in conflict the interest of a variety of nations (from Britain, to Russia, and the America), and a main character (Dirk Sturan, a Scotsman) who is open and interested in what he and the English can learn from the Chinese. Staran is the “Tai-pan” or the leader of the strongest trading group in China. He has a number of other challengers including his arch-enemy, Tyler Brock. Staran is planning on leaving Asia and turning the operation of this company over to his son, Culum, which happens to be in love with Brock’s daughter.

The dream of the traders is to have a safe harbor where they are free to trade in China without Chinese control, and their fleets (the British navy and merchant ships of many nations) can survive storms. The book ends with a terrible typhoon (foreshadowed by the constant checking of the barometer), that destroys much of Hong Kong. But the fleet is spared. The trade will continue and Hong Kong will rebuild. Upon the death of his father, Culum assumes the role of the new Tai-pan while this half-brother (half Chinese and half Scot from Staran’s mistress plots to control the city.

While Clavell’s story does try to give value to the Chinese (their customs and their medicine), it is very much written from a Western point-of-view. I found myself wondering, while reading, how the book would be received in today’s more culturally sensitive and “Me-too” climate. While I’m glad I read the book, I won’t recommend it to anyone else (but I might make you a good deal on a used copy of the book 😊).