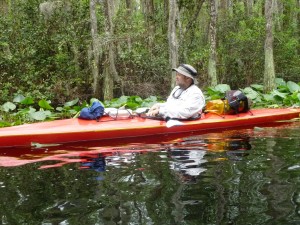 That’s me, photo by John Cork

Last March, I took a week vacation primarily to officiate at my niece’s wedding in North Carolina.  But before heading to the Old North State, I (along with 8 other men) headed to the Okefenokee for a two-night, three-day adventure.  This article on our trip appears in this week’s TWATL (Vol XXXII, #48, July 5-11, 2014).  For those of you not from around here, the TWATL is an independent magazine that stands for “This Week at the Landings.”  This is not a specifically religious article, but one about enjoying God’s wonderful creation.  I have posted it here with many more photos (the print version had only three photos).

We couldn’t see them, but they were there, all around us as we paddled through the narrow water trail from Floyd’s Island back to the Suwanee River.  At times, their bellowing made what’s left of my hair stand on end.  Other times, what seemed to be a soft purr rose from just inside the thick vegetation.  They were all around and obviously enjoying themselves, but I only saw one alligator that morning and it quickly submerged when it saw me.  Hidden from our eyes, the swamp seemed filled with the voices of their erotic spring mating rituals.  I paddled into several of the watery prairies in hope of catching a glimpse of a bull gator lifting its head and bellowing, but was never blessed by such an experience.  I was left with the haunting memories of the sounds of gators courting. 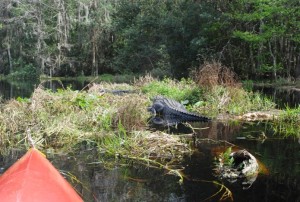 Two gators sunning in the afternoon

It was our second day in the Okefenokee.  There were nine of us.  Seven were from The Landings, plus a friend from St. Simons and my father from North Carolina.  We’d started the morning before at the Stephen Douglas State Park near Fargo, Georgia with seven kayaks and a canoe.  We paddled upstream.  It was an overcast day and we’d only saw a couple of gators.  But in places the air was populated with butterflies dotting around, enjoying the nectar of spring flowers.

Our destination was Floyd’s island, one of the few places of high ground in the swamp.  The island is named for an army officer who led a group of soldiers through the swamp during the Seminole Wars in the early 19th Century. At the campsite is a cabin built in the 1920s by a “Swamper.”  Most of the group decided to bunk inside the cabin.  I and another guy decided we would prefer our hammocks.  The newer jungle-type hammocks are much more comfortable than the older types.  They also have the advantage of being pitched away from the sounds of snoring and the swamp rats known to inhabit the cabin.

We arrived at Floyd’s Island a little after 4 PM, in time for cocktails before a dinner of chili. A fire was built in the pit and we spent the evening talking but everyone was tired and by 9:30, everyone had gone to bed.  I slept soundly until 3 AM, when an owl that sounded as if he was right above my hammock began to hoot.  The owl was followed by a couple of whip-o-wills that continued on their cries until daylight.  The sleep I obtained the last half of the night was in short segments.  At little before 7, I got up and put on a pot of coffee to perk.   Slowly everyone rose and we had oatmeal for breakfast.  Before heading out, we explored a bit of the island.

Our second day of paddling, our longest, was ten miles long as we headed back down the Suwanee to Mixon’s Hammock.  Although only a few alligators were seen in the morning, the sun came out in the afternoon and soon we were seeing gators everywhere, sunning themselves and taking a nap after their morning dallies.

Mixon’s Hammock is a small strip of high ground in the southwest section of the park.  We set up camp, enjoyed cocktails and then had dinner.  A fire was placed in the metal hearth and we sat around talking, swatting bugs, and sharing stories.  A few minutes after heading to bed, as I was still up and reading with a head lamp in my hammock, the rains came.  It seemed to rain throughout the night, but much of it was probably just water dripping off of leaves.  The rain didn’t stop an owl from coming into the campsite, probably in search of mice in search of bits of food we’d dropped.  We all stayed fairly dry.  The sound of rain on a tarp is soothing and I slept well.

Our last morning was wet and cool.  After coffee and breakfast, we packed up and continued paddling the Suwanee through a section known as the narrows where the river winds back and forth.  At places, we could catch the scent of honeysuckle growing on the banks.  After the narrows, the river widens and we saw a number of larger birds, egrets and iris, a variety of ducks and a pileated woodpecker working on a dead tree.   On the southwest boundary of the swamp, there is a sill that controls the flow of the river.  Here, after passing a few fisherman, we arrived at the takeout.  It was time to head back to civilization.  In our three days, we had paddled 24 miles and seen some incredible sights.

paddling along the sill, near the take-out