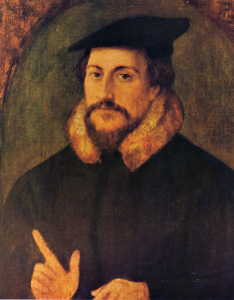 As we enter that gap between the Christmas season and Lent, I will use these Sundays to give you a primer on what it means to be Presbyterians.  We have a rich theological foundation within the movement known as the Reformed Tradition.  This movement began in Switzerland, at approximately the same time as Luther’s Reformation in Germany.  The first city to convert to a Protestant faith was Zurich under the leadership of Urich Zwingli, who’d been preaching about reforming the church since 1516.  The Reformation spread to other cities within the Swiss Confederation, including Geneva which adopted the Protestant faith in 1535 under the leadership of William Farel.  The next year, Farel encouraged John Calvin, a refugee traveling through Geneva, to join him in the work.

In many ways, the Protestant movement has never been the same as Calvin placed his imprint upon it.  Today, I want to introduce you to Calvin and to one of the central focuses of his teachings, the love of a sovereign God.  If you are interested in learning more, I invite you to join me in a Wednesday evening study on Calvin and his legacy.  In order to understand him, we must examine him in light of the 16th Century and get beyond the view of him being a grumpy old man.[1]   He wasn’t!

Calvin’s impact on our world is immense, far beyond theological and biblical studies. At the turn of the 21st Century, one survey identified Calvin as one of the ten top individuals within Western civilization that defined the previous millennium.[2]  His writings, teachings and sermons have influenced not only theology, but government and economics. You see vestiges of Calvin’s thought in the founding of our nation, along with the rise of democracy and capitalism.  In this service in which we draw from Calvin’s worship style, I hope that not only do you learn about him, but why he felt so strongly about his theological convictions which will strengthen our lives as followers of Jesus.

To be fair to Calvin, I should acknowledge he’s probably rolling over in his grave at all the fuss that has been made about him.  Calvin was a very simple man. He was a pastor and a teacher. He didn’t seek publicity, and insisted that upon his death he be buried in an unmarked grave. His wish was granted. But Calvin’s influence is still felt.  Born in France, on July 10, 1509, Calvin fled from his home country due to religious persecution. He ended up in Geneva, where he spent most of his life. Geneva, in the 16th Century, was far ahead of the rest of Europe, politically and economically. Then, as today, it was a banking capital. And, compared to the rest of the continent, it was a relatively tolerant city.[3] (Relative is the operative word—this was the 16th Century, after all.)  Due to the turmoil of the times, Geneva attracted large numbers of refugees from all over Europe. Calvin was one of these refugees.

In Calvin’s ministry, he encouraged the city to take care of the poor.  With so many refugees, there were many poor.  Calvin had the church receive and give out an offering to the poor, a practice he tied to the Lord’s Supper.  In our church, we also do this by bringing offerings of food for local shelters.  Such gifts should remind us that after being nourished by God, we should consider the nourishment of others. But Calvin wasn’t just content to take care of the poor.  He also encouraged everyone to work, including refugees of noble birth, many of whom felt they were above such tasks.[4]  Calvin also turned the medieval usury laws on their head.  He felt it was okay to charge interest if one made a loan to help someone start a business—the person who made the loan should benefit for the success of another.  But he did not think it was okay to take advantage of the poor, loaning to them with high interest rates and forcing them into a subservient position.[5]  I think we can say that Calvin would be quite critical of today’s “pay day loans.”

Education was another focus of both Calvin and the city of Geneva.  The city required children to be educated, and it was provided free to the poor.[6]  Calvin started the Academy, where he taught refugees about the Bible and the Christian life.  When they returned to their homes, they took with them Calvin’s teachings which emphasized the importance of God’s Word.  One such student was John Knox, who led the Reformation in Scotland, from which comes our Presbyterian roots.

Calvin’s worship was grounded in two things: God’s word and prayer.  God’s word was quoted at the beginning and end of worship, and was used throughout.  The Bible was read right before the sermon, which itself is seen as the proclamation of God’s word.  The Bible was also heard through music.  Generally, like the Hebrews before them, the Psalms were put to music.  In addition to God’s word, prayer was important and offered throughout the service—starting with a prayer of confession.  Calvin realized that it was important to come before God with a clean heart; worship began in confession.  The Lord’s Prayer was also important and often repeated three times in the service, a trick I’m not going to try today. [7]

For my sermon this morning, I want us to look at Isaiah 12.  It’s a short chapter which will allow me to draw some conclusions about Calvin’s theology and how it should influence our lives of faith.

The symbol Calvin adopted for himself had a hand offering up a heart and the words around it read, “My heart I offer to you, Lord, promptly and sincerely.”[8]  This symbol reflects Calvin’s faith grounded in a sovereign and loving God.   Isaiah 12 is a Psalm of Thanksgiving.  Israel can rejoice because God’s anger has been turned away.  In the face of such news, offering ourselves to God is an appropriate response.[9]

Verse one tells us that God’s anger has been removed which leads Isaiah in verse two to proclaim God to be his salvation!  There is no longer a need to be afraid.  When we are in bondage to sin, we are cut off from God, and there are plenty of reasons for us to fearful. John Calvin, writing on this passage, speaks of how sin clouds or fogs our mind.  When we are away from God, we are filled with dread.  But when the news of God’s salvation is heard, experienced in the coming of Christ, it’s like the sun burning away the fog; and we can have confidence in God’s mercy.   Drawing upon Colossians 3:15, Calvin continues saying that this confidence should fill our hearts and “banish all fear and dread.”  We are not “free from all distress,” but we have the assurance that in the end we will be victorious.[10]

Calvin is realistic.  Although we have confidence, we still battle sin.  Our hope is that because of God’s love and mercy, we will be successful and reunited with our Savior.  There will be times in our lives when we are distressed.  Those who suggest that the Christian life is free from all troubles don’t know what they are talking about, but we can hold tight to the promises made in Scripture and have assurance and hope.

In the third verse, “with joy you will draw water from the wells of salvation,” we come upon one of the two main metaphors Calvin uses for God.  Calvin sees God as being a Father, and frequently uses the parent metaphor for the Almighty.  The other metaphor that Calvin commonly uses for God is that of the fountain or a well.[11]  This metaphor ties into our baptism; God is the foundation of all goodness.  Isaiah refers to this fountain or well as a place from which we are nourished.  “This is a very beautiful metaphor,” Calvin wrote in his commentary, “for in this life nothing is more necessary than water…  Thus, by this figure of speech…  [Isaiah] declares that everything necessary for supporting life flows to us from the underserved goodness of God.  And since we are empty and destitute of everything good, he appropriately compares the mercy of God to a fountain.”[12]

You know, when you are thirsty, there is nothing better than a good cold drink of water drawn from the depths of the earth.  Wendell Berry’s novel, Nathan Coulter, ends at such a place.  Nathan and his grandpa have been out watching the men work, cutting hay.  As his grandpa is now too old to work the fields, Nathan escorts him back to his home.  As they make their way across fields and pastures, they come upon the spring in a notch in the rock down by the brow of the hill.  The old man sits down and rests and the boy draws a cup of water for his grandpa.  The old man takes the cup and cuddles it in his hand, looking at the spring and commenting that he’d never known it to go dry.  As he drinks from the cup, Nathan thinks of all who’ve drunk from the spring, his father, grandfather and great-grandfather and of those who inhabited the land before them.[13]

Berry’s description of the spring reminds us of why the metaphor of a well (or spring or fountain) is so foundational for John Calvin.  Like the Coulters, we drink from this spring, generation after generation, as we are nurtured by the God of our salvation.  We drink from the same well as Calvin and the believers in the church throughout the ages.  God never changes and when we study scripture, we learn of God’s eternal truths.  When we drink from this well, we will be strengthened and more confident.  This new disposition will embolden us to sing God’s praises and to proclaim his great deeds.

Our chapter ends with Isaiah calling on Israel, who has experienced God’s salvation, to praise God and to tell others—all the earth—about the goodness of the Lord.   And it’s not to be just us praising God as individuals; we’re to draw others into our celebration.  We’re to be a part of a world-wide community that praises the Lord.  Here I think we see the essence of our faith.  When we experience God’s love, we react in joyful obedience.  By the way, worship is a form of work and yes, works are important.  This isn’t because they get God to notice us or because we can earn our salvation. Works are important because they are the consequences of our salvation.  Having been freed from God’s anger, we can rejoice and encourage others to rejoice.  Having experienced the goodness of the Lord, we should also show goodness and mercy to others.

One final thing about Calvin: he encouraged believers to get involved, to be the salt of the earth.[14]  We’re to work for the betterment of others, and in doing so, we praise God.  All of life is worthy of our religious attention.  Once we’ve been freed from the bonds of sin, out of joy, we should praise God and share his love.  That’s the essence of this passage.

The next time you’re thirsty and go for a cold drink of water, pause for a moment and think about how God is like a well that never goes dry, always refreshing us with crisp cold water that quenches our thirst.  And give thanks.  Amen.

[3] For a discussion of Geneva’s tolerance, see Marilynne Robinson, The Death of Adam: Essays on Modern Thought (NY: Picador, 1998), 198.

[8] For a background to this symbol, which is now used as the seal for Calvin College, see http://www.calvin.edu/about/history/calvin-seal.html.