As I have been preaching from the Jacob stories in Genesis this August and September, I thought I would also share a review to a novel based on Jacob’s story: 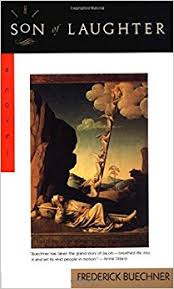 Jacob is a complex character and his life takes up a good chunk of the book of Genesis.  He is known as a trickster.  He cheats his brother, twice, and fools his father.  He is also tricked by his father-in-law Laban into working much longer than he’d planned in order to marry the woman he loves. Laban forces him to marry both of his daughters, the one he doesn’t love and the one he loves.  This creates conflict within Jacob’s family, which grows large with a total of twelve sons.  Frederick Buechner takes this story from scripture and writes a novel about the third patriarch in Genesis.

Jacob’s father is Isaac, whose name means laughter.  Isaac’s parents were well beyond social security age when he was born. They’d laughed at the idea of having a child so that becomes his name. “Laughter” carries a horrible memory, of being tied on a pyre about to be offered up as a sacrifice (Genesis 22).  It is a memory he reveals to his sons, Esau and Jacob.  With favorite children and secrets, we see the dysfunctionality of this family.  Yet, it is through this family that God is at work to fulfill the promise.

Jacob, like his father Isaac and grandfather Abraham, has intimate conversations with God.  But God isn’t yet known.  It’ll be 400 more years before Moses experiences God’s presence as the great “I AM” at the burning bush.  Jacob’s experiences God in a dream and as a stranger in the night.  He refers to this invisible deity as “the Fear.”  The Fear is stronger than the local gods, such as the ones of Laban, gods whom Jacob’s favorite wife Rachel had stolen when they broke away from Laban.  These “idols” cause trouble within the clan. Jacob follows the directions from the Fear, which often comes to him through dreams.  And his favorite son, Joseph, is the interpreter of dreams.  The story ends with Jacob and his family being saved by Joseph who has risen to power in Egypt.  But Jacob knows he doesn’t belong in this land.  He extracts a promise from his sons that they will see to it that his bones are returned to the place of his ancestors.

Buechner brings the story of Jacob to life.  In this novel, we’re taken back in time, back before the Exodus, before the Prophets, and before the coming of Christ.  In a world of a multitude of gods that’s filled with superstition, Jacob fosters a relationship with the One God.  I think it is appropriate for God to be referred to as “the Fear,” for we can only stand in awe before such a deity. And Jacob, who is a flawed character, reminds us of God’s grace and freedom.  He believes strongly that The Fear has chosen him and his sons to be a blessing to the world.  His story also reminds us that we live with a promise from God, one that goes back long before our birth and will not be fulfilled until after our deaths. We, too, are to be a blessing.  We live our lives in faith, trusting beyond what we can see or will experience.

If you’d like to learn more about Jacob, read Genesis 25-37 and 47:27-49.  And then read Buechner’s novel.  It’s amazing what God can do through flawed characters!