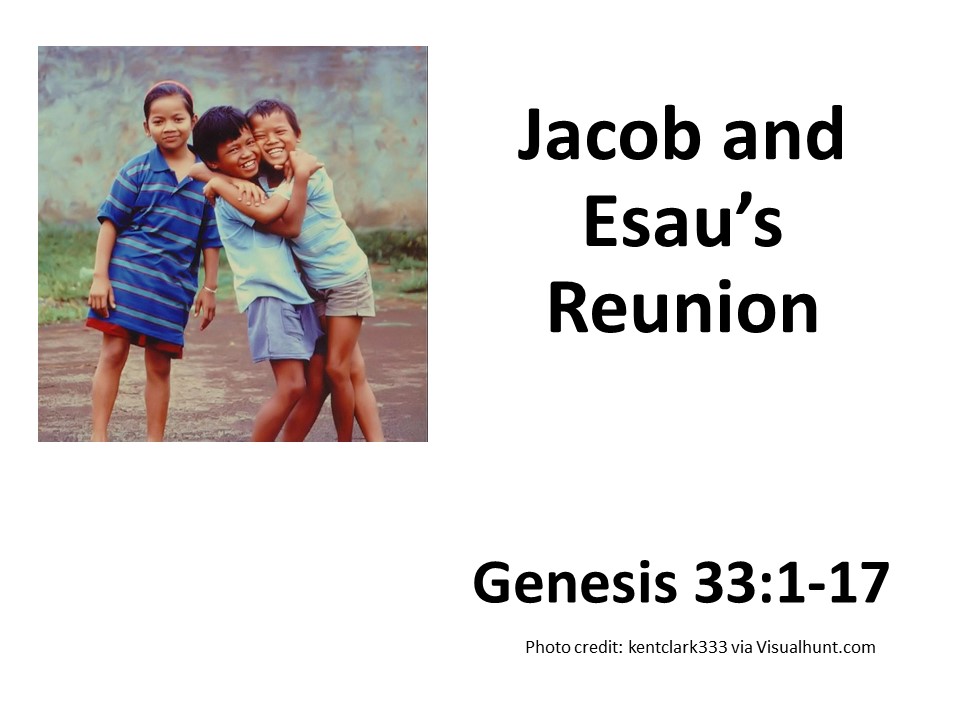 For the past two months we’ve been exploring stories of Jacob, the third patriarch of Israel.  Last week, we heard that God changed Jacob’s name to Israel.  Jacob, or Israel, has fought with men and with God and has prevailed.[1] But he shows the scars of battle as he limps along. We’ve seen how Jacob had cheated his brother and his father in order to obtain a blessing. Now God has blessed him and his family will carry on the promise that was first given to Abraham. The only problem is that Jacob must return to his homeland which means he must confront his brother, Esau.  Jacob, the fair skinned momma boy, must meet his macho brother, whom he’s not seen in two decades. When Jacob left after tricking his father and cheating his brother out of a blessing, Esau was furious. Jacob ran for his life.  And he’s been fretting over this reunion all along.  And now the two of them are about to meet.

One thing I should note is that while Jacob’s name was changed to Israel, among friends and family he’s still going by Jacob. They weren’t present for the wrestling match we read about last week.  Today, we’re at the end of this series on Jacob.  Let’s see how it turns out.  Read Genesis 33:1-17. 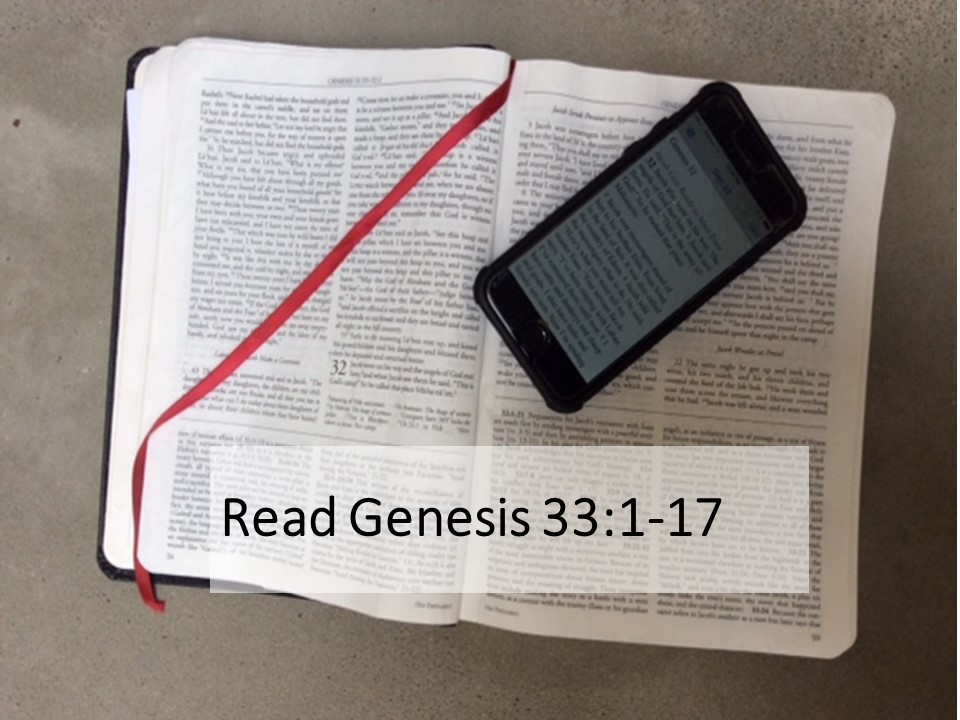 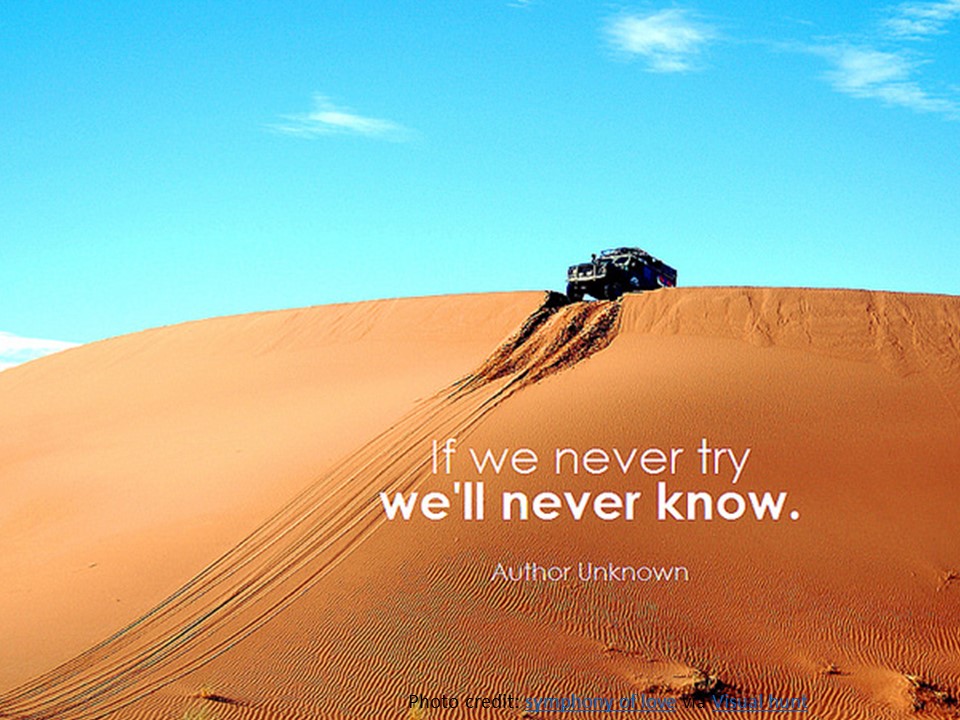 I recently heard that procrastination is a sign of creativity.  Or at least creative people tend to procrastinate.  I don’t know if that is true. Maybe it is, maybe not. I just hope it is for I’d like to be able to use it as an excuse.

There have been times I have had things I didn’t want to do and I kept putting them off. I fret over them. This is especially true when there is something I need to make right with someone else.  An apology that needed to be offered, but I just couldn’t bring myself to do it. After a while, what could have been easily corrected with a hand-written note or a phone call becomes a huge task. I realize I should have taken the first step, even though I might have felt slighted and wanted the other person to make the first move. But we can’t control others, we can only control ourselves.

Jacob certainly had a way of putting things off. It seems important for him to make an effort at reconciliation with his brother even though he’s not sure how it was going to turn out. He can only control what he does, not how his brother responds. I wonder if the years in which he fretted over making such an effort he created a monster out of the task at hand. The more Jacob thinks about it, the more he worries about that hairy masculine brother wringing his neck. And, on the night before their encounter, Jacob’s hip is pulled out of joint. Now he doesn’t even have a chance to outrun Esau.  He’s stuck.  He has to go through with meeting his brother regardless of the consequences. 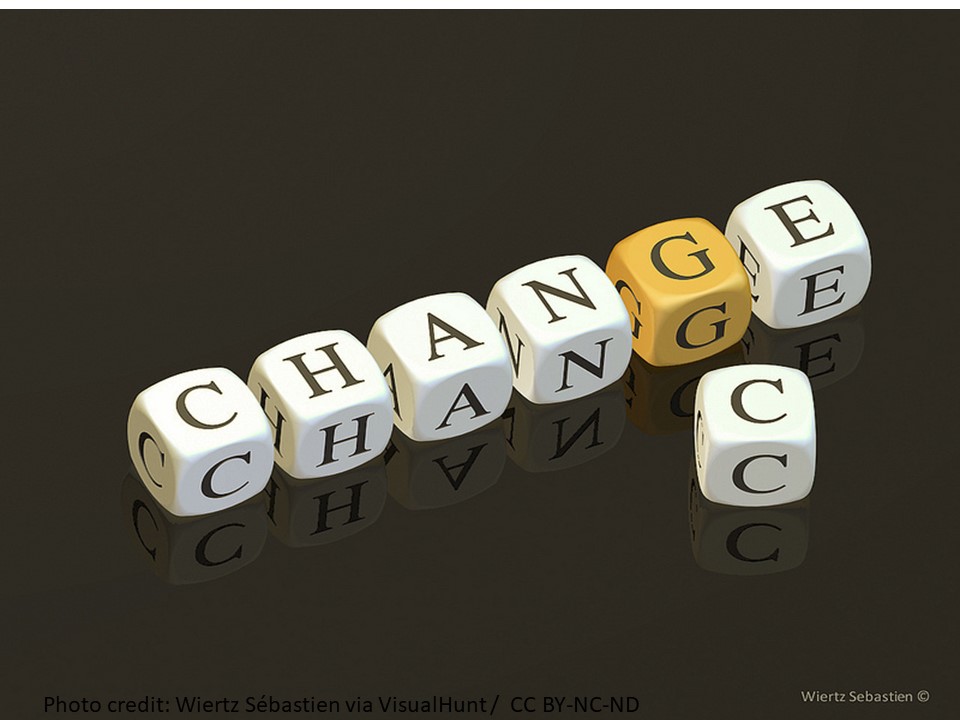 Another thing I have notice about myself is that although I realizing I’m changing, I don’t generally think about how other people might be changing. This is especially true of friends from the past whom I may not see for years. It’s not exactly “out of sight, out of mind” for I do think of them. It’s only that I remember them as they were when I last saw them. If I really think about it, I realize they, too, must be changing. I don’t know about you, but I don’t generally think about that. I noticed this most at class reunions, where I realize that almost everyone present is losing the battle to gravity. And where did these folks get all those wrinkles? I also have experienced this phenomenon on Facebook when I become reacquainted with a friend from the past and am surprised he doesn’t have any hair either.

Again, I wonder if this isn’t part of Jacob problem.  He still sees Esau as the young man he’d wrong and assumes that Esau had spent the past two decades letting his anger boil just as Jacob had spent that time fretting over what might happen when they meet again.

Jacob is certainly nervous when he sees Esau approaching.  We again see him picking favorites.  He lines up his family, starting with the servants of Leah and Rachel and their children.  Then he places Leah and her children.  And at the end he places his beloved Rachel and her son, Joseph.  Although we are not told the reason, it appears Jacob hopes that if his brother is out for blood, he might be appeased at taking out his vengeance on the first group of his family. He’s saved his favorite for the last. At least Rachel and Joseph will have a chance to get away. We’re not told how the mothers of his children felt about this alignment, but I am sure such favoritism didn’t bring harmony to his dysfunctional family. 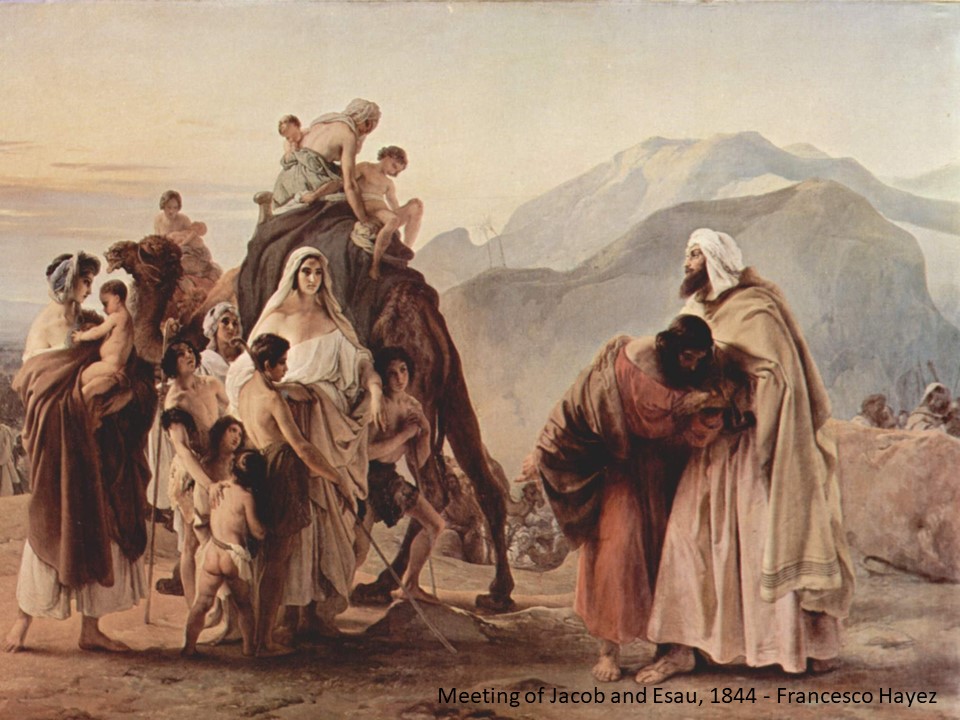 But, to Jacob’s credit, he goes first.  He’s in front, limping along, with his extended family in tow. If there is going to be blood, he might as well offer his own.  After all, he’s facing demons of his own making. We’re told that Jacob bows seven times as he brother approaches—the type of homage that one would have shown to a Pharaoh.[2] As we saw last week, Jacob had already sent gifts ahead to Esau. Now he’s showing his submissiveness.  He has no idea how his brother will respond. Will Esau extract the vengeance that, at least in Jacob’s mind, has been building over the past twenty years?

Instead of vengeance, Esau is joyous! Much like the father in the Prodigal Son, Esau runs out ahead and embraces his brother. The two hug and cry together. 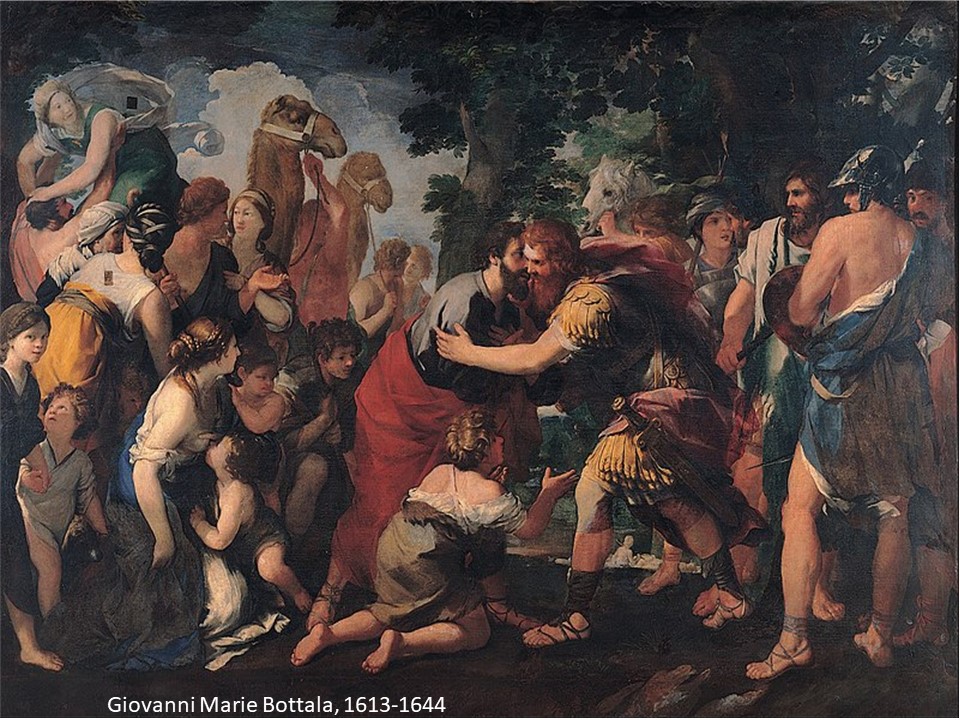 Then Esau comments on his brother’s family and delights in meeting his sisters-in-law and nieces and nephews.  Jacob rightly gives God the credit for his family. Esau then insists that no gifts are necessary even though when Jacob presses, he accepts the gifts graciously. As Jacob says, he has all that he needs.  But it appears that so does Esau.  Both men have been successful.  Jacob has herds and a large family, Esau has a small army.

Then, in verses 10, Jacob expresses his joy, saying that looking at Esau’s face is like looking into the face of God.  Jacob has encountered God a few times by this point, and as Jesus tells us in the parable, we too will encounter him in the face of others.[3]  Maybe a part of this has to do with Esau’s willingness to let the past be gone and to make the reconciliation as easy as possible.

After a reunion, they go separate ways, partly out of necessity. With the herds and animals, Jacob’s crowd is much slower than Esau’s. What’s important is that the two brothers have been reunited and Jacob is back in the land of his father. 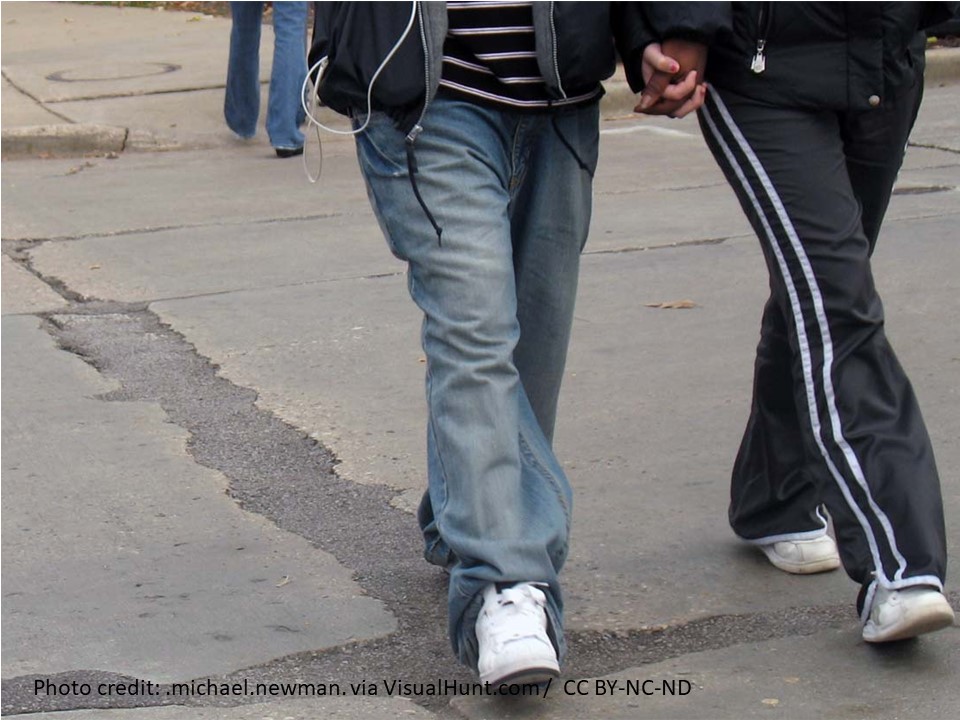 A lot of times I think we are like Jacob, afraid of taking steps toward reconciliation.  We worry and agonize over it. Like Jacob, we may even go to great lengths to pave the way, such as offering gifts.  But when we finally get around to it, many times we find that it wasn’t nearly as big of a deal as we had made it out to be. Sometimes, like with Esau, the person we worry about has moved on with their lives. Or times have soften or erased their bitterness. So we need to be the willing to be the first person to take steps toward reconciliation with our brothers and sisters.

In our New Testament reading, we heard the familiar story of the Prodigal Son.[4] In this story Jesus tells, the father represents God. The younger son has done terrible things to the father, to the point the father could be justified to treat the son as one dead or at the very least to treat him like a servant.  Even the younger son realizes this, knowing that his father might not want to see him. But he goes back home, partly because he has no other choice, and he is warmly welcomed by his father.  His old man doesn’t wait for him to return home, but runs down the road to meet his wayward son. Think about God running after us. Maybe this is why Jacob saw God’s face in Esau, who ran and embraced him. 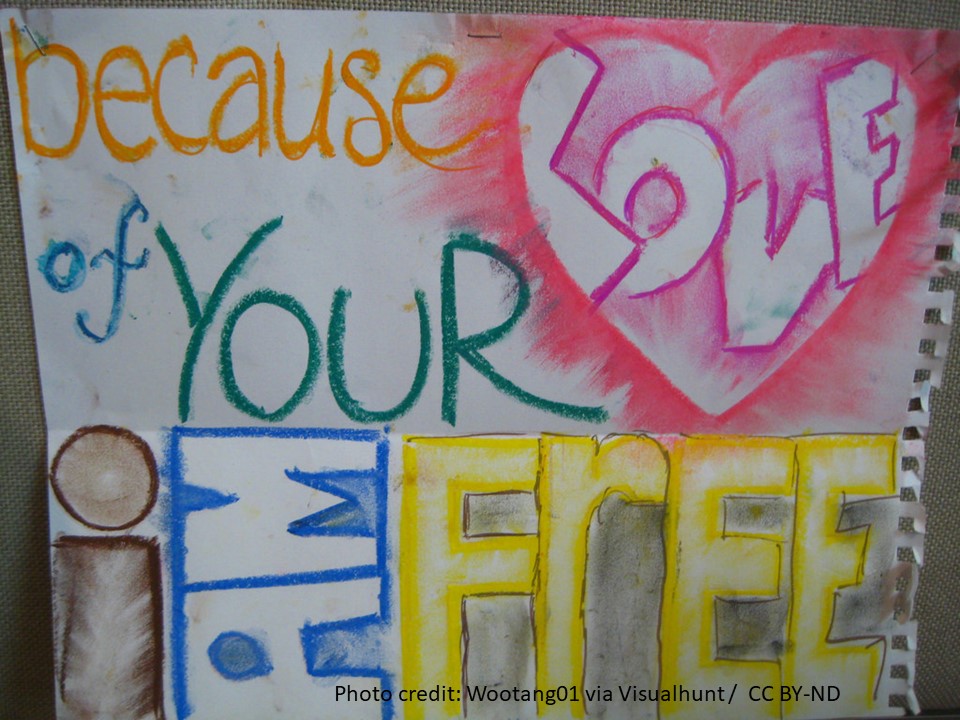 If we want to be godly, we too must be willing to ask for forgiveness, to grant forgiveness when requested of us, and to seek reconciliation. That’s what the gospel is about. God through Jesus Christ is reconciling himself to the world. And as Christians, we are to take that a step further and seek to reconcile relationships broken between one another.

Jesus says, “Blessed are the peacemakers.”[5] In the Lord’s Prayer, we pray, “forgive us our debts as we forgive our debtors,” or as a more modern translation would have it, “forgive us our sins as we forgive the sins of others.[6] And Jesus tells us to make things right with our brother (or sister) before we come to make a sacrifice to God.[7] Our willingness to forgive the wrong done to others is linked to God’s forgiveness. 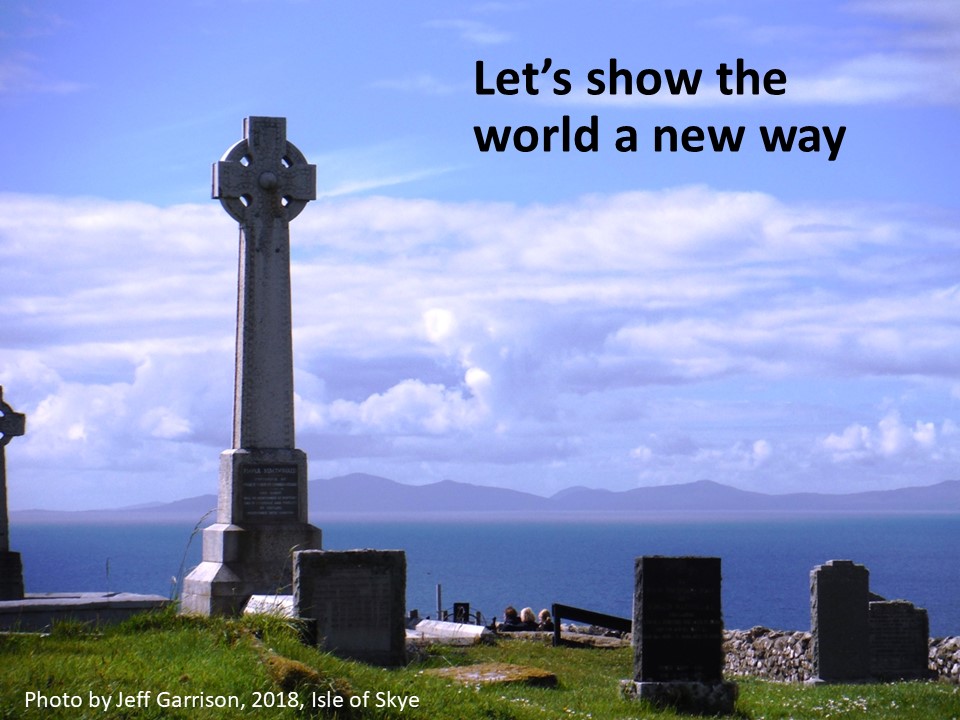 But as we see in our story of Jacob and Esau, it is sometimes hard for us to take that step and seek reconciliation. We’re told this story from the point of view of Jacob.  We don’t know what had gone on in Esau’s life. But it is evident that he was glad to see his brother. If there are those whom we love and whom we’re separated from, we need to be the ones to take the risk to seek out forgiveness. We need to be the ones to strive for a new relationship, or at least reconciliation.  For when we take such a step, we reflect Jesus’ face to the world that is bitterly divided.  It is a world that needs to see that reconciliation and not division is the way of the cross. And as God’s people, that’s our calling.  Amen.