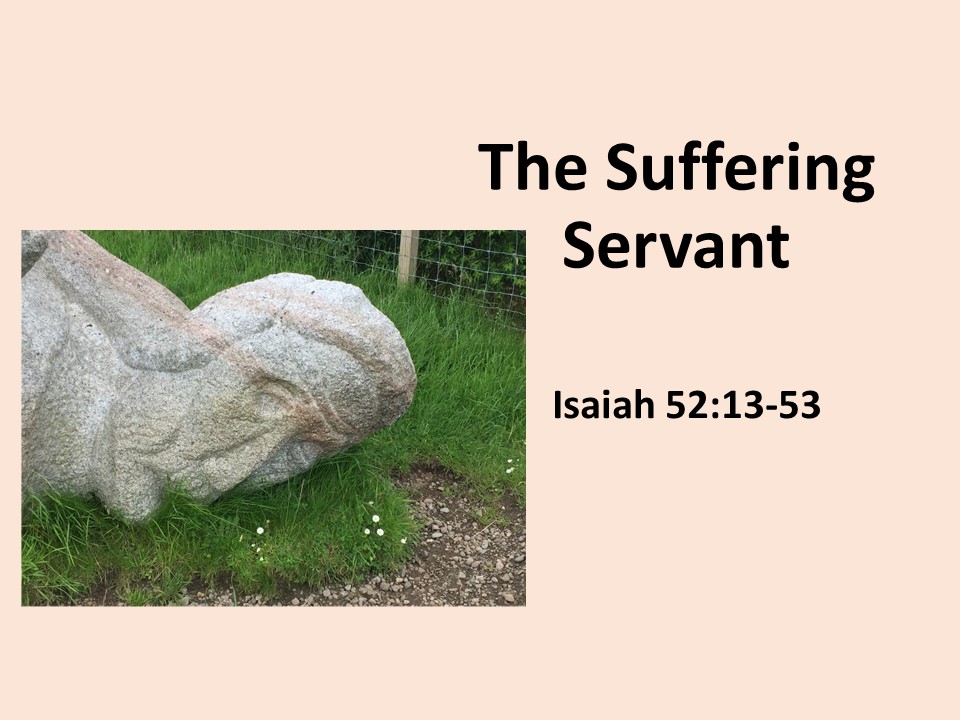 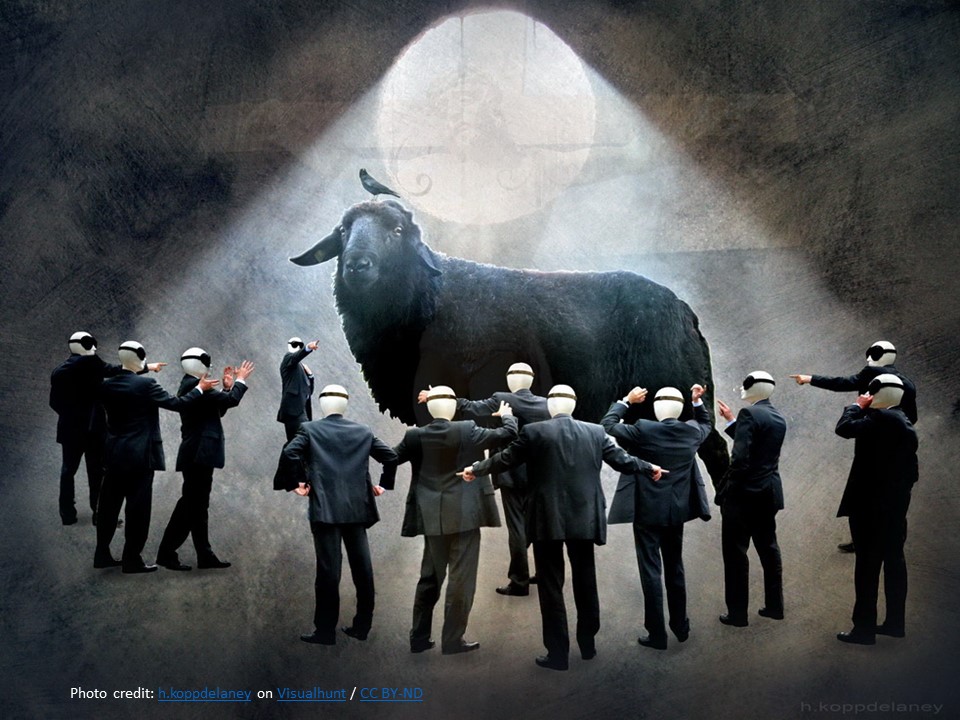 In Genesis, we learn that the consequence of sin and disobedience of God is death.[1] In the last two weeks, we’ve look at the scripture passages dealing with the Passover and the near-sacrifice of Isaac. In both situations, we see God providing a way out of the situation. While in bondage in Egypt, God tells the Hebrew people how to avoid the angel of death by putting the blood of a lamb over their doorways.  With Abraham, God ultimately does not demand the sacrifice of Isaac, but provides a ram as a sacrifice.  In passages we’ve not looked at, such as those in Leviticus, we learn God even provided a way in which sinful humanity could atone for their sins through the sacrifice of animals and the use of a “scapegoat.”[2] You know that term comes from scripture, don’t you? Originally, the scapegoat was to take away the sins of the people, not just cover up our own misdeeds as the term is often used today.

In the continuing revelation of God in Scripture, we move from the need of a sacrifice to ultimately understanding that Jesus has, once and for all, made the necessary sacrifice on our behalf.[3]  Today, we’re looking at Isaiah 53, in which find for the first time in Scripture, a person serving as the sacrifice for others.[4] 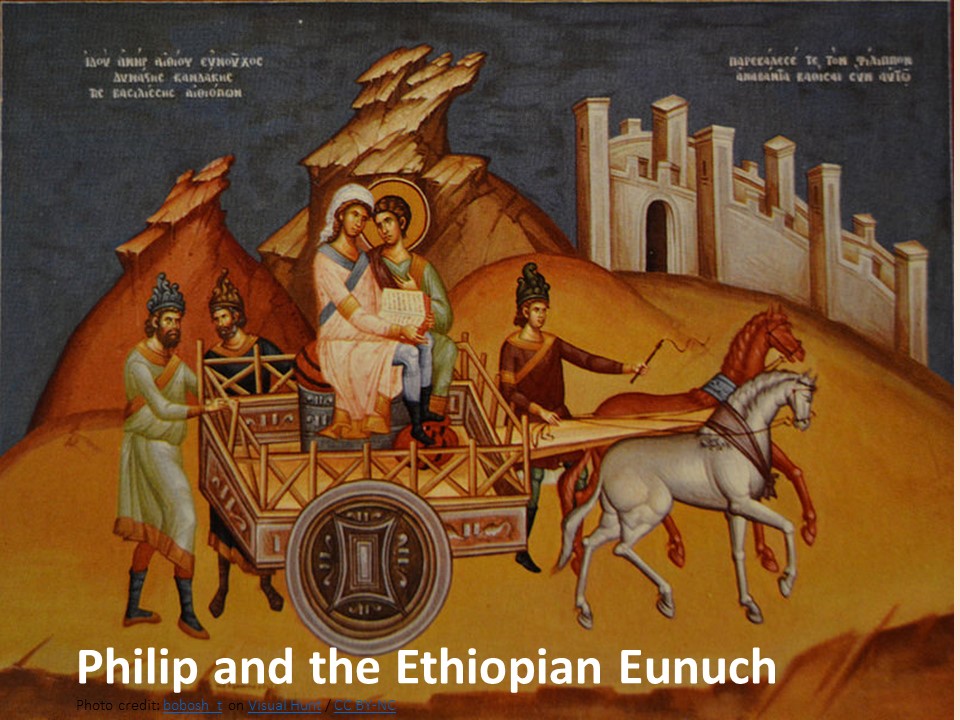 Our reading is from what’s known as the Fourth Suffering Servant passage in Isaiah.  The passage actually begins back at Isaiah 52:12.These suffering servant passages have been debated over the centuries. Jewish interpreters see the passage as applying to the suffering of Israel. Christian interpreters understand this passage as applying to Jesus. This interpretation goes back to Philip, in the book of Acts, who encounters the Ethiopian eunuch reading this passage and asking for help in understanding it. Philip leads him to see that this passage is about Jesus, who died for our sin.[5] Today, I’m going to read this passage in its entirety, from Isaiah 52:13 through chapter 53. 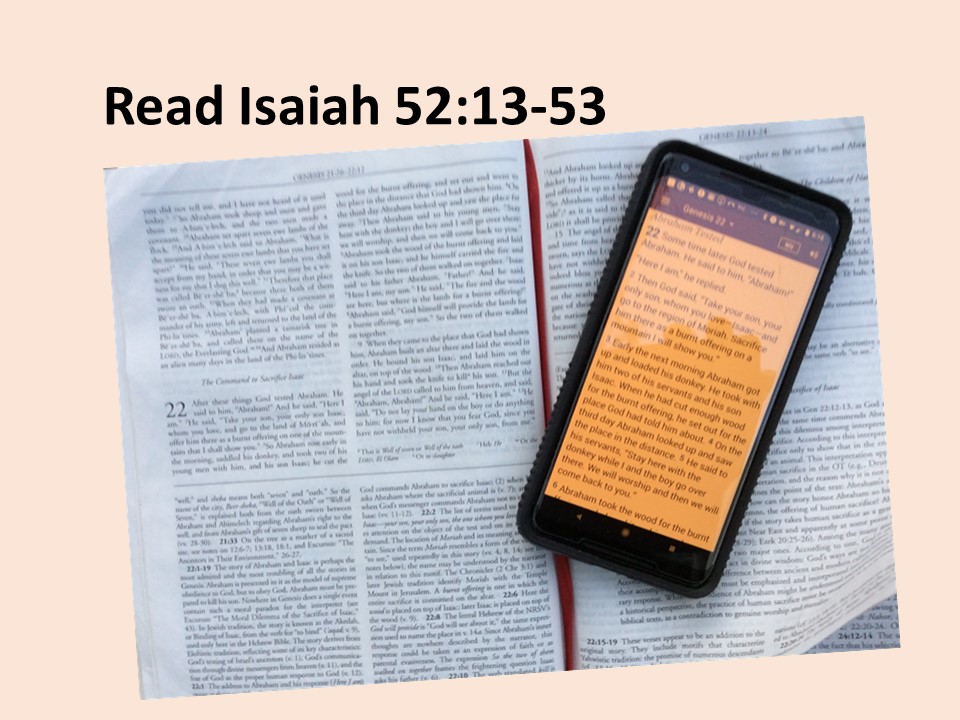 What are your thoughts about vicarious suffering? Should someone else suffer for our sins and misdeeds? Should we be willing to be punished for the misdeeds of others? What do you think? 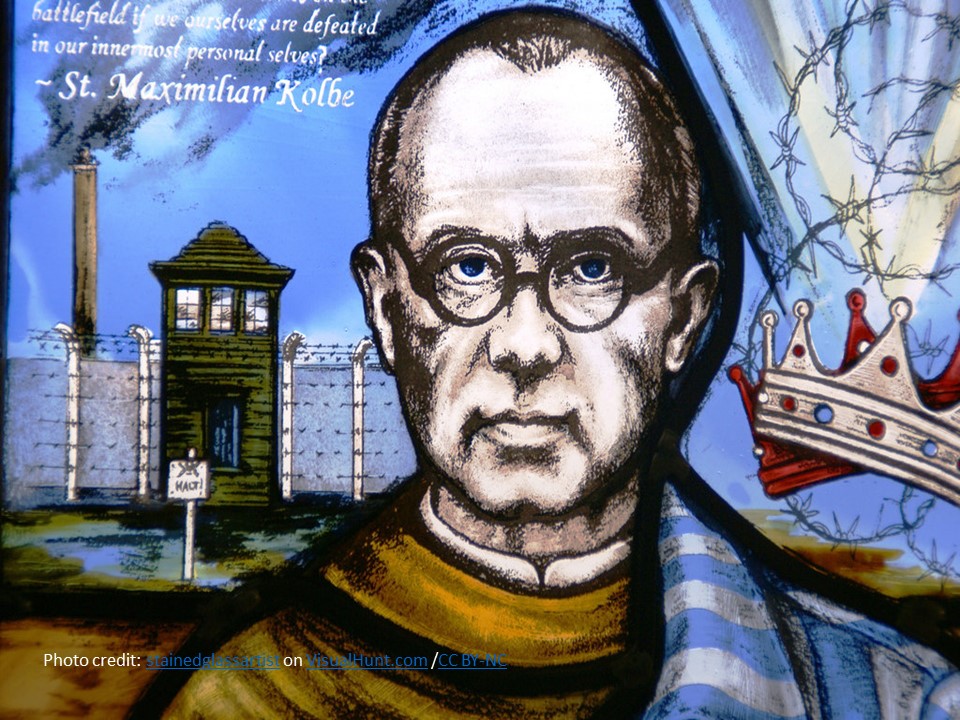 Maximilian Kolbe, a Polish Franciscan priest provides an example of such suffering. Early in 1941, he was arrested by the Nazi’s for publishing unapproved literature and sentenced to hard labor. He was sent to a concentration camp, Auschwitz.  That August, a prisoner escaped. As was the German policy, they took ten men out of the barrack from which the escaped prisoner was housed to be punished. The ten were to be placed in a starvation chamber where they would be left till they died. One of the men who was selected cried out about his family and not seeing his children again.  Kolbe volunteer to take his place.  For two weeks, he suffered with the other nine.  At this point, only four of the men were still alive and the Germans, needing the chamber again, finished off the four with an injection of acid into their veins.  Kolbe was one of those alive and he held out his arm to his executioner to receive the injection.[6]

What causes someone to willingly give up their life for someone else? We know it happens. Many of us, if provided the opportunity, would be willing to risk our lives for other.  In the excitement of a moment, we might run into a burning building or dive into cold swift water to save someone. When situations arise, there are people willing to risk it all for a stranger. Parents are known to go to great lengths to save their children, and in times of famine there are stories of parents forgoing nourishment so their children survive. In most wars, there are examples of those who jump on grenades to save their friends, or who volunteer for suicide missions in order to give their unit a chance to survive.

In the movie, “Saving Private Ryan,” the main character is sent on a mission to find a paratrooper whose three brothers had been killed in the previous days’ battles on D-Day and in the Pacific.  Captain John Miller, played by Tom Hanks, is sent to find and keep Ryan safe so that his mother won’t lose all her sons.  Miller, as well as many of his men, die in their efforts, which leads Ryan to ask his wife fifty years later if he had earned their sacrifice. That’s an awful burden to carry, the feeling that we must earn the sacrifice of another. 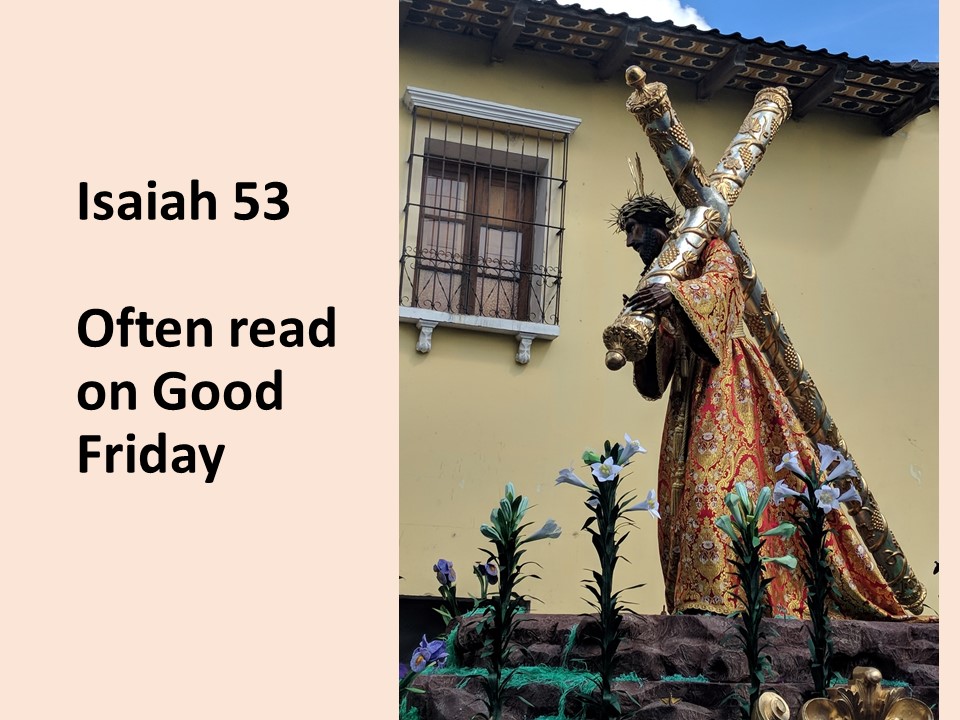 Our passage this morning speaks of one who carries our burdens, our sins.  As I noted before reading this passage, up until this point in Scripture, God allows a way out of sin through the offering of sacrifices. But now, through the prophet Isaiah, we learn of another way.  It is easy to see why those after Jesus’ death and resurrection were drawn to this passage. This is a popular passage to read on Good Fridays.

The suffering servant is filled with God’s saving power, but with human characteristics, he’s so meek we might overlook him. He’s innocent, yet willingly and obediently suffers. Jesus is God who has come in the flesh. He comes, not as a king born in a palace but as a child to parents who have no other place to place him but in a manger.[7] Although Jesus trembles before his Father on the night before his death and asks if this cup might be removed, he’s obedient and affirms his Heavenly father’s will.[8] There are so many parallels between this passage and Jesus’ life and death. 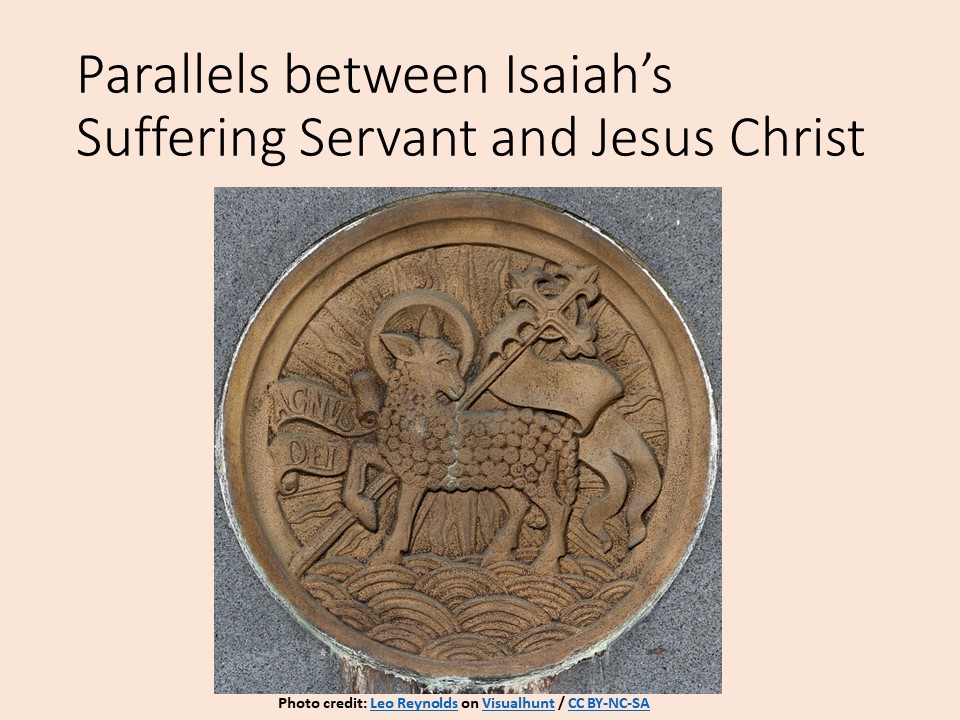 The suffering described by Isaiah also parallel’s Jesus’ suffering. He doesn’t complain to his executioners.  His suffering is great because he is innocent and it’s our sins that he bears. Like Jesus, the sufferer described by Isaiah dies with the wicked and then is buried in a tomb of the rich.[9] He becomes an offering for sin, and will make many righteous (or as we might, many will be washed in his blood). As we’ll see in the next three weeks, as I continue this exploration of the “Lamb of God’ theme, through Jesus Christ, God has provided us a way out of our bondage, God has given us a sacrifice that is above all others.

Now, there are many passages in Scripture where I can say, this means we should do this. But this is not a passage about what we do, it’s a passage about what God does for us.  The one who suffers on our behalf is done, not because of something we’ve do, but through the grace of God. God loves us so much that he has constantly, since our first sin, tried to draw us back to himself. That’s love; that’s grace.

Back to the question I asked earlier… What do you think about someone suffering vicariously for another? Do you think it is right or just? Regardless, if we accept Jesus, we are accepting his offer of suffering for our sin. Can we handle that?  Can we admit that we can’t save ourselves need a Savior?  Can we accept that what’s important isn’t what we do, it’s what God does for us? Can we humble ourselves that much? 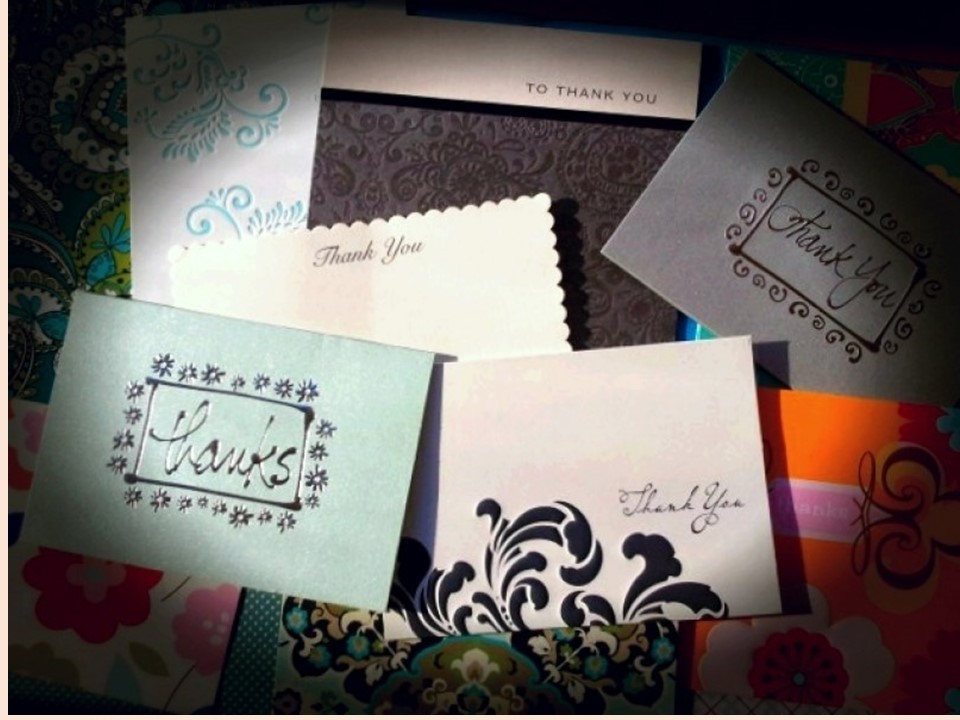 The question is not what we must do to obtain such grace, but how we respond to such grace. God has been so good to us, not only in creation, but also in our redemption.  Can we receive what God has done for us through Christ in humble gratitude and then, with gracious hearts, seek to follow Jesus.  And knowing that our eternal security is in what Christ, we can live fearlessly in this life, willing to offer ourselves for the life of another.[10]

Our eternal security is grounded, not in what we do, but in the grace of our Savior. Those of us who follow Jesus should be fearless in the face of suffering and death. We know we’re in Gods’ hands.  No one can take that away from us.[11] Amen.