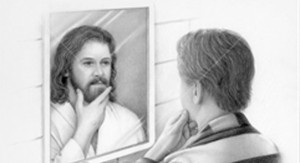 This morning we’re going to explore a passage in the 12th Chapter of John’s gospel.  This incident occurs just a few days before Jesus’ crucifixion.   The situation in Jerusalem is tense.  In the preceding chapter, Jesus raised Lazarus from the grave.  Paradoxically, in John’s gospel, this life-giving miracle is the final straw for the Jewish leaders.  They are thinking that the only way to stop Jesus is to kill him.  In the verse right before where I will begin reading, a new urgency can be heard within their voices as they complain about how everyone is going after Jesus. Providing life to one leads to the death of another—that’s a way of understanding the gospel!

It’s almost as if John is trying to legitimize the leader’s fear by then telling us a group of Greeks are coming to meet Jesus.  Jesus is popular!   But instead of building on his popularity, Jesus tells a parable that implies the seriousness of following him.   Listen.  READ JOHN 12:20-26.

I like the way this passage starts off.  “Sir, we wish to see Jesus.”  If I was stronger, I’d turn this pulpit around and show you the plaque on the inside that reads, “Sir, we would see Jesus,” which is the King James translation of this passage.[1]  Hopefully, at times, Jesus is experienced in our worship (as well as in our lives).

Here, we have some Greeks, outsiders, seeking Jesus!  A shift has occurred.  The magnitude of Jesus’ ministry, which won’t be fully understood until after his death and resurrection, is foreshadowed.  Jesus had primarily worked with the Jews.  Now these Greeks seek Jesus.  There are disagreements among scholars if these “Greeks” were Greek-speaking Jews, Jewish proselytes, or Gentiles.[2]  Since they’re in Jerusalem right before the Passover, it seems that they must be Jewish; or, they are at least considering adopting Jewish practices and becoming a proselyte, but John doesn’t say one way or another.  Regardless of their background, John uses them to foreshadow Jesus’ larger purpose—salvation for the entire world.

“Sir, we wish to see Jesus,” they ask.  Jesus draws people to himself, which he still does today, but we’re not told if they ever got a chance to see Jesus.  The question is asked of Philip—a disciple with a Greek name, which may be the reason he’s singled out.  In the stories of Philip, it seems he can’t do anything by himself.  Instead of answering, he runs off finds Andrew and the two of them take the request to Jesus. [3] But John doesn’t tell us if Jesus granted them an audience.  Instead, John notes Jesus’ shift in conversation, as he talks about what’s going to happen.

“The hour has come for the Son of Man to be glorified.”  Now that John has shown that interest in Jesus extends beyond those living in Judah, Galilee and Samaria, Jesus focuses on what is about to unfold.  “The hour has come for the Son of Man to be glorified.”  I’m sure this was sweet music to the disciples’ ears.  They’ve been wondering when Jesus was going to usher in his kingdom.   They’ve had visions of Jesus sitting up on David’s throne and them all around him in positions of power and glory.  But Jesus doesn’t stop at the glory, he continues on with a disturbing parable.  “Unless the wheat falls to the earth and dies, it remains only a kernel, but in dying it can grow into a plant which bears fruit.”  Jesus isn’t just hinting around, he is saying clearly that he must die.  The Pharisees are going to get their wish.  As Jesus peaks in popularity, his life and ministry on earth comes to an end.

Let’s consider this parable.  Farming was tough back in Jesus’ day.  There were no Co-ops or Farm Supply Stores where you could buy seed.  Instead, you kept a portion of your previous harvest as seed so you would have something to plant during the next season.  This means that if you had a poor harvest and, as the winter continued, your supply of wheat would dwindle and you’d have to make a hard decision.  Do you eat all your wheat or do you tighten up your belt and go with less so that you will have seed enough for another crop?  Consider your thoughts as you, on an empty stomach, sowed the seeds into the ground.  It took faith to be a farmer back then, just as it does today, to bury seeds knowing they’ll die but in the hopes they’ll sprout.

Some of the disciples listening to Jesus’ parable had probably experienced such situations.  They knew the value of planting, of letting the seed die in the hopes that God would give it new life and an abundant harvest.  Here Jesus is talking about himself, about his death, but he quickly shifts to talk not just about himself but also about his followers.

“Those who love their life will lose it and those who hate their life in this world will keep it for eternal life.  Whoever serves me must follow me…”  This idea of losing our lives or losing ourselves for Jesus isn’t too appealing, but there is something to it because this saying from Jesus is recorded in all four of the gospels.[4]

There are a couple of things in this passage that I want us to consider this morning.  First of all, Jesus wants to make sure that his disciples, and his followers who come thereafter, know that he came to die, and that in dying he was doing something very counter-intuitive.  Through his death, through being lifted up (if you’d read ahead to verse 33), Jesus draws all people to himself.  Like the seed that dies in the ground as it sprouts new growth, Jesus knows his sacrifice will reap an incredible harvest.

Jesus’ message is “I love you enough to die for you.”  In this way, Jesus is like a good parent who will do anything and everything to save the children.  It is something instilled in mothers throughout the animal kingdom.  I have seen it when paddling on a river and come near to the nests of ducks and one bird takes off, limping, as if to lead us from the nest.  The bird keeps moving away from the nest until we are far away and then, flying normally, circles back.  I’ve also seen this behavior when hiking—a grouse will wobble away from the nest staying just out-of-reach, until you are a safe distant from the nest, then flies off normally and circles back to the nest.  Both birds are making themselves more vulnerable in order to save their young.  Likewise, Jesus is there for us and not only is he willing to die for us, he does!

Jesus sacrifices for us, but he also calls on us to sacrifice for others.  It is not just about Jesus’ sacrifice, but our willingness to work on behalf of others.  If we follow Jesus, we must as he said in another place, “Pick up our cross daily.”[5]  The Spiritual life is about being in tune with the needs of others.  We have to be willing to sacrifice, to let go of things that we hold dear but which hinder our walk with Jesus.  If we want to enjoy a life with Christ, we got to give up a life of sinful ways.  You can’t be hating folks and be a Christ follower.  You can’t be dishonest and be considered a Christ follower.  I’m not saying we have to be perfect.  Certainly we’ll all slip up, but when we do, we confess and repent and continue on, devoting ourselves to change and continue striving to be better.

But this passage isn’t just about the sins we’re to give up; it acknowledges that a life following Jesus has cost which can be quite high—it can cost as much as our own lives.  Yet, our focus can’t be on what we’ll lose, but on what we –and more appropriately—what our Master will gain in the harvest.

We always have to give up something to acquire something else, that’s a principle of economics.  You can’t have it all, you can’t have your cake and eat it too, so you make an economic decision to sacrifice one thing for another.  If you’re a kid and you have a dollar burning in your pocket, you have to decide if you’re going to spend it on an ice cream cone that’s been tempting you, or if you will invest the dollar for when you go to college.  One satisfies an immediate need, the other a long-term need.  Unfortunately, in our society, immediate gratification generally wins. But not in the gospel!  Long-term gratification takes precedent.  Consider Jesus’ words about storing up our treasures in heaven where we don’t have to fear thieves and where they will not rust.[6]

What is it that Jesus is calling us to give up for him?   A lot of what is being taught in this passage has to do with death, but I hope you can see a linkage between this parable and Jesus’ teachings on stewardship.  In the parable of the talents, in which those who were rewarded had invested all they had, the ones who were rewarded did not hedge their bets.[7]  They had faith.  Jesus calls us to be faithful and willing to invest in the building up of his kingdom.  As an individual, that may mean being willing to give sacrificially to Christ’s work in our church and in his missions in the world.  Or it may mean you give up a pleasurable vacation and volunteer to go on a mission trip.  As a congregation it may mean us doing something we’re uncomfortable with, perhaps adjusting the style or the time of worship in order to make room to receive new disciples.  It may mean compromising so that we all benefit and our programs are strengthen.  It may mean we are forced out of our comfortable zone and go out into the world to help others.  “Unless a seed falls to the earth and dies,” we’re told.

I want to go back to that opening question in our text, “Sir, we wish to see Jesus?”  How would we respond to such a request?  Although we cannot take them physically to Jesus, hopefully they will witness Jesus in our lives and in the life of his community, the church.  For we are his body in the world and when we follow him, he can be seen through our lives.  As Jesus reminds us in the Parable of the Judgment of the Nations, when we show kindness, we serve him.  But you know what; Jesus doesn’t want us to wait for that question.  Instead, he wants us to share him, to show his love, with others.  Jesus wants us to reflect his face—Jesus’ face—onto a hurting world.  What are we willing to give us, to sacrifice, for him?  Amen.

[1]This isn’t the only pulpit with this as Frederick Dale Bruner points out in his commentary, The Gospel of John: A Commentary (Grand Rapids: Eerdmans, 2012), 712.

[3] When Philip was called to follow Jesus, he went and got Nathanael to go with him.  John 1:43ff.