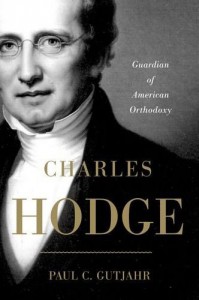 Charles Hodge taught at Princeton Theological Seminary for over fifty years and was perhaps the most prominent American theologian of the 19th Century.  During his career, not only did he teach a significant number of Presbyterian ministers, he also taught a large number of Baptist, Congregational and Episcopal clergy, many of whom went on to teach in seminaries around the country.  His influence at Princeton continued long after his death as his son and other students continued his tradition. Interestingly, until 2011, there has not been a major biography of Hodge since 1880, when his son published a biography just two years after his father’s death.  This is one of two major biographies of Hodge to be published in 2011; the other being Andrew Hoffecker’s Charles Hodge: The Pride of Princeton (I haven’t read it).

Hodge was born in 1797 into a Philadelphia family involved in shipping and international trade.  The family was also instrumental in the development of a college that would later become Princeton University.  Hodge’s own life would be tied to Princeton, as all of his advance education was at the school with the exception of a year spent in Europe studying.  When Hodge was an infant his father died from Yellow Fever.  Although he was born with a prominent name, without a father and with the demise of American shipping in the late 18th Century, Hodge’s mother struggled to raise him and his brother Hugh.  Through her efforts and the support of family and friends, both sons were educated at Princeton (Hugh became a physician). They were also raised within the Presbyterian Church and taught the Westminster Catechism.

Gutjahr makes the case that Hodge’s upbringing, especially how his family found themselves dependent on the charity of others, set his course for life.  He valued education, was generous and hospitable. (22) One of the first things I remember hearing about Hodge when I was just beginning my theological studies was a statement made (partly in jest) at his 50th anniversary of teaching at Princeton Seminary where he bragged that nothing had changed in tenure.  Such a view makes Hodge out to be a stern and inflexible teacher within the Old School Presbyterian tradition.  Gutjahr dispels such a myth.  His portrait of Hodge’s life shows him a man that cared deeply about others, was grounded in a deep personal piety, who enjoyed simple things of life (such as gardening, which was the only thing he every bragged about), and loved children and family.  Hodge was married twice and greatly grieved at the death of his first wife.  He delighted in his children (one of whom took over his position at Princeton) and grandchildren.

Although Hodge’s belief in Augustinian Calvinism as represented in the Westminster Confession of Faith remained constant throughout his life, Gutjahr makes the point that he was not the fundamentalist that would be found in Princeton later in the 19th and early 20th Centuries.  Hodge, who was also always interested in science and endorsed the day-age theory of creation instead of holding to the literal seven day creation of Genesis. (368)

Gutjahr also shows how Hodge grounded his theology in a school of philosophy known as Scottish Common Sense Realism.  This thought, popularized in America by John Witherspoon (a Presbyterian clergyman, President of Princeton, and the only clergy to sign the Declaration of Independence) dominated American intellectual life in the years before the Civil War.  Scottish Common Sense Realism attempted to hold to the importance of science as it had developed during the Enlightenment while tying it to a religious base.  It taught three basic concepts:

1. Basic truths are “self-evident.”
2.  In addition to the five normal senses, people possess a common moral sense allowing all people to distinguish between good and evil.
3.  The use of the inductive method (as taught by Francis Bacon) allows for facts about our world to be known through experience. (39)

This philosophy modified American Calvinism from the harsher elements of earlier Calvinists as it made more room for individual responsibility in that all people (not just the elect)had a common moral grounding.  (At some point, but not in this book review, I should explore the relation between Common Sense Realism and the concept of “Common Grace” that rose within Dutch Calvinism and how the two of them relate to Calvin’s third use of the law).

Hodge rose to prominence within the denomination during the 1837 split between the Old School and New School.  The New School softened its Calvinistic beliefs by emphasizes the role of emotions and allowing the use of revivalist techniques in the conversion experience.  Hodge defended the Old School position challenging the thoughts of Albert Barnes (major theologian of the New School position), evangelist Charles Finney and others in his popular journal, Biblical Repertory and Princeton Review. He also had problems with rise of Christian volunteer societies in the 19th Century. Although he supported various Christian denominations working together to share the gospel overseas, closer to home he warned of their danger within congregations and denominations, reminding others that they were not the church proper. (166)

One of the more controversial issues that Hodge faced in his lifetime was slavery. Gutjahr continually makes the case that Hodge hated the system even though at one point he owned a slave who served as a housekeeper.  It appears Hodge treated her well, encouraged education and Christian discipleship for all slaves, but Gutjahr doesn’t give us any more details about how he came to purchase her and what happened that led to her freedom (or sale).   In the years leading up to the Civil War, he always suggested that slavery should be gradually eliminated and saw danger in the extreme abolitionists who demanded an immediate end to slavery. Seeing nothing in scripture that expressly prohibited slavery, Hodge did not see the justification for such splits.

In the Civil War, he was firmly on the side of the Union but mostly because he felt the Union was necessary, not because he felt the war would end slavery.(325)   Gutjahr devotes a whole chapter to slavery and later another chapter on his support of Monogenism (which held that all humanity came from a single source and not multiple sources).  The polygenists (humanity came from multiple sources) was used by some Southerners to support slavery, but Hodge felt such a belief went against Scripture.  (It would be interesting to follow how the Southern acceptance of polygenism changed over the 19th and 20th Century leading to the Scopes Trial as there does seem to be a great disconnect here).  Thepolygenism/monogenism debate helped Hodge change his position on slavery and by the time Lincoln issued the Emancipation Proclamation, Hodge supported it.  (350).

During the time of Southern succession, Hodge grieved over the nation’s split, but he hoped that the church (Old School Presbyterians) could demonstrate Christian unity.  This was not to be and Hodge, who fought to keep the church from mirroring the nation, was deeply depressed about the split within the church.  Likewise, Hodge didn’t agree with the Northern Old and New School reunion in the years after the war, preferring a reunion with the Southern Church.  That was not to happen.  The Southern Old and New Schools had merged in 1863 and the Southern and Northern streams wouldn’t come back together until over a century had passed since Hodge’s death.

Hodge served as a moderator of the Old School Presbyterian Church 1846 General Assembly, an assembly in which he encouraged the development of Presbyterian parochial schools.  This idea didn’t develop into a reality as few within the denomination supported it. Gutjahr follows Hodge’s battles with Transcendentalism, Mercersburg Theology, German idealism, and with the Southern Old School leader, James Henley Thornwell.  Thornwell followed Hodge as moderator of the denomination.  Although the two agreed on many things, when it came to their doctrine of the church, they disagreed.  Hodge insisted that the Bible allowed for latitude for church government while Thornwell, who maintained that the “Bible is our only rule and when it is silent, we have no right to speak,” believed God had set down the Presbyterian system within scripture.  (288) When the 1843 General Assembly elevated ministers above elders, making them members of a presbytery and not a local church, Thornwell feared this would denigrate the role of ruling elder and lead to “High Churchism and Popery.” (290) Gutjahr argues that the battle between Thornwell and Hodge demonstrates how, in matters of the church, Hodge could be a “biblical pragmatist.”

Another area where Hodge went against many in his own camp was in his support of accepting Roman Catholic baptism. The baptism, set forth in the Trinitarian formula, was enough for Hodge to insist that it was valid even though he disagreed with much of their theology and polity. Gutjahr also makes the case that Hodge could be more lenient and gracious toward those outside of the Reformed Faith than within it.  If one was going to be a Presbyterian, Hodge had higher expectations how they conformed to the Westminster Catechism. I was shocked with how little Hodge depended on the actual writings of John Calvin.

His own theological training used the theology of Francis Turretin (Swiss Reformed).  Examining the index to Hodge’s own three volume Systemic Theology shows only a moderate number of references to Calvin. Within the text there are a few footnotes to the Institutes of the Christian Religion, but not as many as I would have thought.  This may be more of a personal preference (or maybe it was because of the times didn’t demand as detailed footnoting as is expected today). For me, I would have to credit the course on Calvin’s Institutes,as taught by Charles Partee, to be the most influential class during my studies of theology.  (See my review of Charles Partee, The Theology of John Calvin)

Gutjahr concludes the book with an Epilogue that briefly discusses Hodge’s legend continued on after his death through the Presbyterian Fundamentalist Crisis of the 1920s.  A whole book could be written on Hodge’s influence and the epilogue just “wet’s one thirst” for such a work.  That said, there are several good books on this transition, but they only briefly mention Charles Hodge.  See George Mardsen, Fundamentalism and American Culture:The Shaping of Twentieth-Century Evangelism, 1870-1925, and Bradley Longfield, The Presbyterian Controversy: Fundamentalists, Modernists, & Moderates. This is a major book to work through and I would only recommend it to those interested in 19th Century American history, specifically intellectually and theological thought.