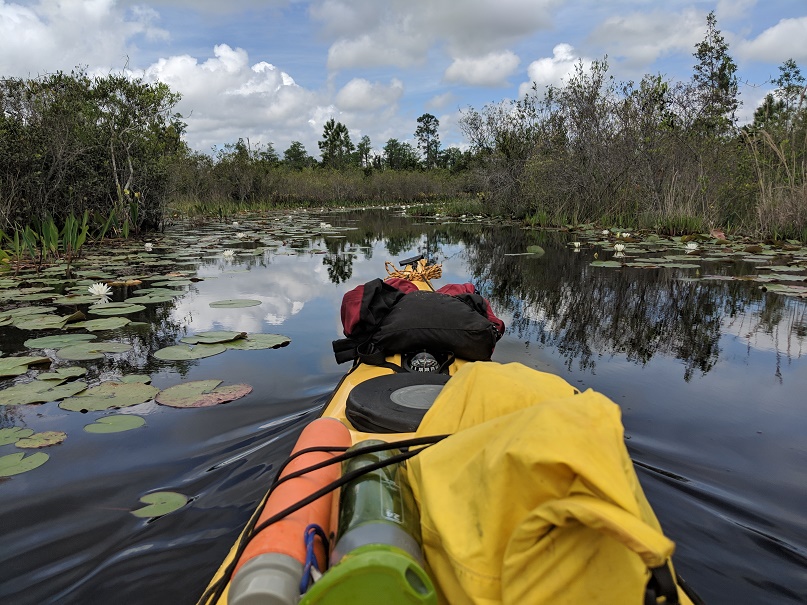 Paddling through a prairie (before Double Lake) 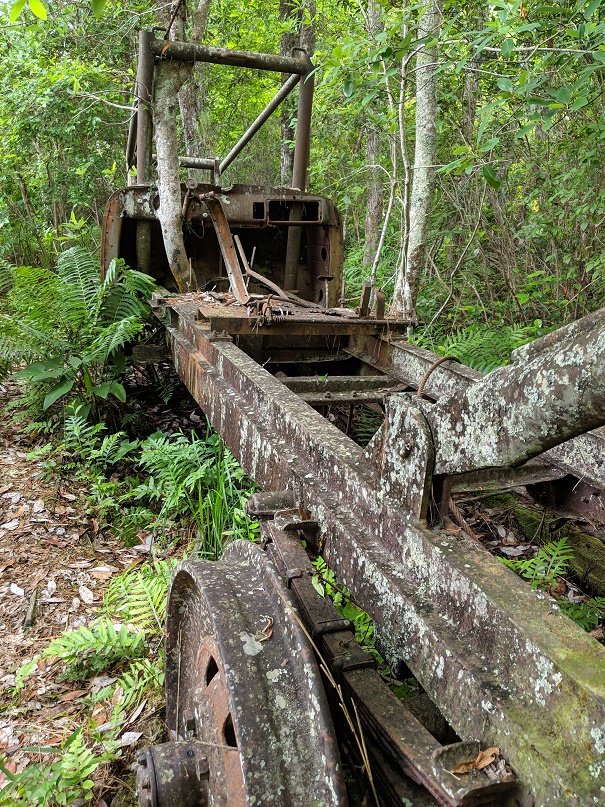 We leave our vehicles at Okefenokee Adventures where we have arranged for a shuttle to our put-in site some twenty-five miles to the north. In five days (four for Gary, who will leave a day before me), I’ll come out of the swamp here. Our shuttle driver is a retired mechanic from CSX railroad. As he drives us to Kingfisher Landing, he points out old Hard-shell Baptist Churches that still sing shape-note music. When he hears that our first night will be at Maul Hammock, he tells us the story of the first reported account of Bigfoot, which occurred in the early part of the 19th Century near where will be camping. Seven men went into the swamp and were attacked by a huge hairy beast. Supposedly, the beast was killed but not before he killed five of the men. The other two fled before any of Bigfoot’s friends could finish the job. A hammock, in this country, is a piece of high ground with trees. The “Maul” part comes from the supposedly attack by Bigfoot. When we arrive at Kingfisher Landing, he points us over to the woods opposite the canal, where the rusty remains of an old logging truck designed to run on rails sits. 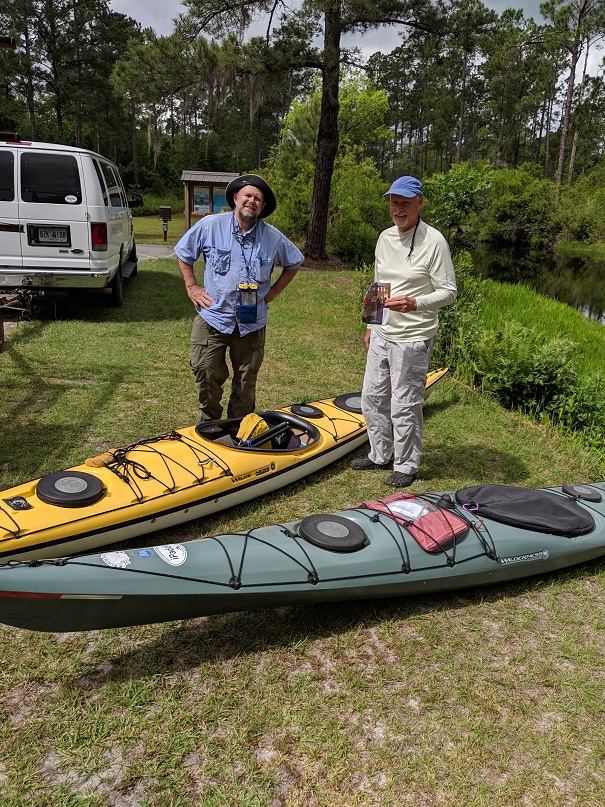 We push off from Kingfisher Landing a little after 10 AM. The air is hot and heavy with humidity. There are some clouds in the sky. Our trail, an old canal, is mostly straight, fairly wide, and runs eastward into the swamp. We pass a few alligators. Occasionally a frog jumps into the water as we approach. At the two mile mark, we take the red trail to the northeast and skirt along the northern edge of Cedar Prairie. The water is low, as it often is this time of the year. I am a little worried that we may have a hard time in places, but the first five or so miles, to where there trail folks with a side trail running to Double Lakes, is clear and easy to paddle. This area is open to boats with motors under 10 horsepower. It seems the fishermen have kept the channel clean. I hope they bring plenty of shear pins for their prop, for the lily pads would do a number on them.  I’d thought about paddling up into Double Lakes, but there’s now clouds in the sky and thunder is occasionally heard in the distance. We are only halfway to Maul Hammock, where we will spend the evening on a platform above the water. 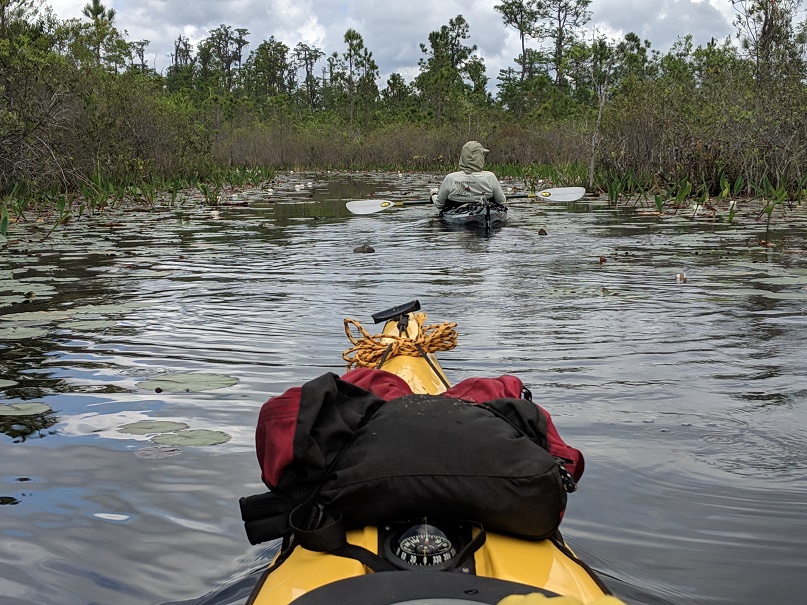 It’s good that we didn’t explore because after the turn-off to Double Lakes, the trail becomes more difficult. In places, lily pads and other weeds fill the channel and often seem to grab and hold on to your paddle. It’s a workout, but we keep paddling. The lily pads include the elegant blooming white lotus plants and some of the more bland yellow blooms. Along the sides of the path, where it is open, are hooded pitcher plants, purple swamp irises and pickerel weed with its purple torch-like flowers. At places, bladderworts, odd flowering plants that grow in water, are seen. Like the pitcher plants, they too are carnivorous. With so many insect eating plants, you’d think bugs wouldn’t be a problem. The abundance of these plants are an indication of the poor soil, so they have evolved to obtain nutrients from other sources. And there seems to be plenty of mosquitoes and biting flies to feed these plants, as we’ll later experience.

Finally, the trail turns to the southwest. We still two miles to go, but the thunder that’s been rolling for the past hour or so has moved closer. We pick up the pace, but paddling through thick vegetation is exhausting. 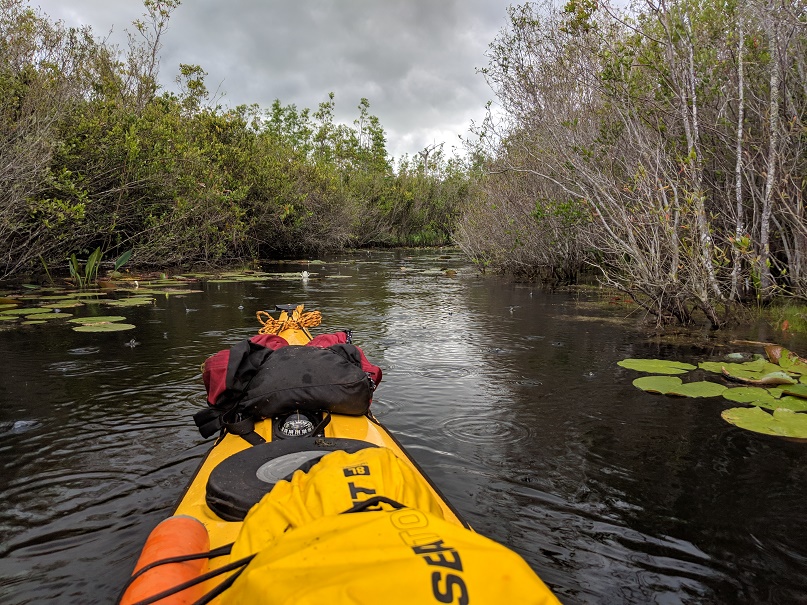 the start of the rain

We leave the prairie and paddle through tall cypress and bay trees, with briers and other vegetation lining the channel. There are few lily pads to fight, but the channel is so tight that we must keep the paddle up and down, close to the sides of the boat. The thunder becomes more intense and we hear it crackle across the sky. When we enter another prairie and have a better view, clearly defined lightning bolts are popping all around. It’s beginning to rain. Soon, the bolts are striking only a few hundred yards away, followed by a nearly instantaneous boom that vibrates across the swamp. We paddle harder as the rain comes. The drops are think and heavy and drown out the sounds of the swamp. As the rain becomes heavier, the lightning moves further away. We continue to paddle harder and after an intense 20 minute downpour, that soaks us both and, since neither are us are wearing spray skirts, drops a few inches of water into our boats. 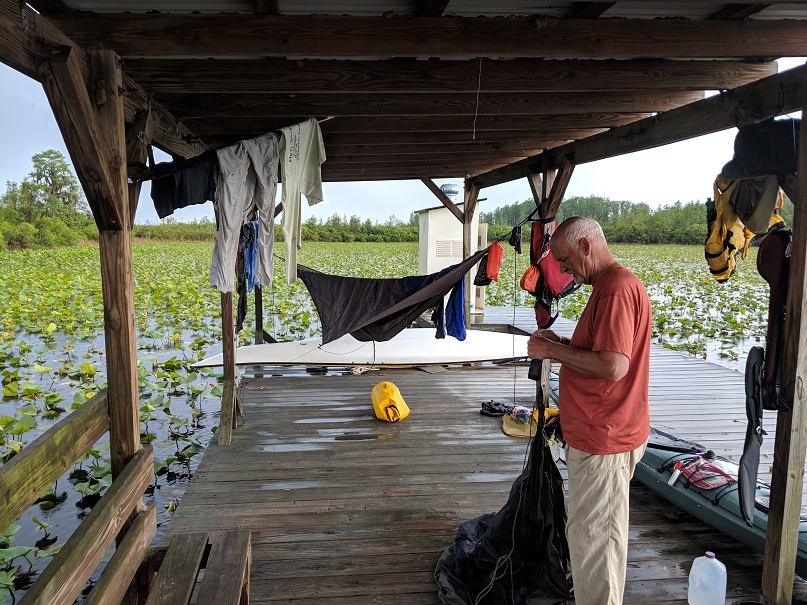 Gary setting up his hammock at Maul Hammock Platform

As the rain subsides, we pump out some of the water from the boat and paddle on toward the side trail to Maul Hammock platform. We enter a lake filled with lily pads that, in places, are up to our shoulders. The platform is to our left, at the edge of the lake. We head toward it as the water continues to drizzle. As we are pulling the boats up onto the platform, we notice a few stray bolts of lightning on the backside of the storm. It’ll be good to get into dry clothes, to fix a drink and dinner, and to rest. It’s been a long day as we’ve covered nearly 13 long miles. 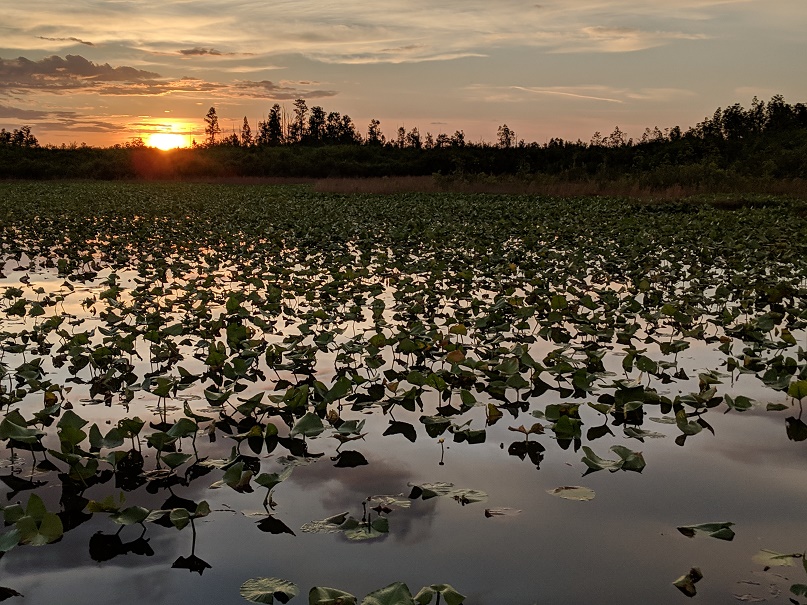