This is my thoughts on Sailboat Church: Helping Your Church Rethink Its Mission and Practice by Joan Gray  (Louisville, KY: Westminster/John Knox Press, 2014).

In Sailboat Church, Joan Gray uses a sailboat as a metaphor for what a Spirit-filled Church should be.  When the winds fill the sails, the boat moves forward across the water gracefully.  Of course, there are those times in which we have to wait for the wind, just as we have to wait for God.  But we’re called to a life of faithfulness and trust, not just to mark off so many miles.  While in the doldrums, the crew of a sailboat prepares itself as it looks for evidence of wind across the waters.  And when the wind rises, the boat will move much faster than a rowboat, Gray’s other metaphor for churches.  The sailboat church depends on God’s Spirit, the rowboat church depends on the hard work of the members who often burn out from the toil.  Gray mentions another kind of boat, the luxury yacht that seldom leaves the dock, but she doesn’t focus on such boats, concentrating instead on the sailboat and rowboat metaphors.  As she notes, just as a boat is designed to move across the waters, a church is designed to move forward and be involved in God’s mission, not to be a haven for parties while moored.  As Christians, we are called to sail.  This requires us to take a risk and to depend on the wind, which in ancient languages happens to have the same root meaning as “Spirit.”

I picked up this book because I had my own thoughts of using sailing as a metaphor for church life. Having served as a pastor for over a quarter-century, I have, too often, experienced frustration at the institution and felt as if the church was an ocean liner with a broken rudder and I was on the stern with a canoe paddle trying to direct its course.  I’m sure Gray would call me out for such “rowboat mentality” and she would have a point.   As I began to sail more regularly, I have pondered the relationship between sailing and the church.  I picked up Gray’s book, thinking that she might have also been thinking the same thoughts, but that’s not exactly the case.  Gray doesn’t go into the technical details of sailing; instead she focuses on the church and compares it to a sailboat or a rowboat.

In sailing, as in the church, there are often forces opposing the direction in which you hope to go.  In the church, this may be the values of the larger society, but in sailing it is wind and/or current.  It is impossible to sail directly into the wind and as it is nearly impossible to move a congregation directly into the headwinds of the culture in which a church exists.  But in sailing, one can move forward, against the wind, through a series of tacks.  In fact, the boat is designed to move even faster upwind, as it sails at “close-haul” (at an angle just off the wind).  Here, the wind sweeps through the canvas, giving the boat lift.  As the sails tighten, the boat heels to leeward (leaning in the wind) but is held upright by the counter force of the keel, allowing the energy of the wind to be harnessed as the boat is lifted forward across the water.   Because of the dynamics involved, a boat can sail faster in this manner than if it was sailing downwind.

Of course, if the direction you want to go is 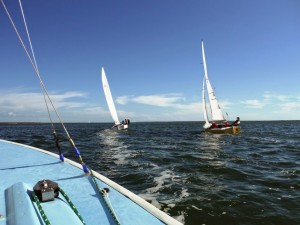 dead into the wind, a close-haul course won’t take you there.  To move in a direction upwind, the crew has to perform a series of tacks, in which the boat zigzags upwind.  The sailor at the helm begins by announcing his intentions, “Prepare to tack.”  The crew responds by taking hold of the sheets (or lines that control the sails) in order to be ready to quickly release them.  When all are ready, the sailor at the helm shouts, “Tacking” or “Ready-about,” to alert the crew followed by “hard-a-lee” as the tiller is pulled downwind, which turns the boat into the wind.  As he does this, the crew releases the sheets on the jib and brings them in on the opposite side.  Once this turn is complete, the boat is sailing on the opposite tack or side of the wind.   A series of such turns allows a boat to make its way upwind.

There are several lessons from tacking that also apply to leading a church through change.  First of all, everyone has to have a clear understanding of the goal, the direction into which they are ultimately heading.  If some want to jibe the boat around and head downwind, while others want to go off to the right or left on a reach, the crew actions may resemble a comedy of errors or worse.  There needs to be an understanding in which direction the boat is heading.  Communication is important.  Even if everyone agrees on the overall goal, they need to know what is happening and when.  The “directions” need to be clearly given, otherwise people will be confused and may do things that keep the organization from making a clean tack.

There are other times the tack is not as clean as you’d hoped.  Perhaps someone misunderstood a command, a sheet or line became tangled and was hard to release, the wind shifted as you were making the tack, or the sailor at the helm tried to make a smaller adjustment with the tiller instead of the significant commitment required in a tack.  A tack requires the boat to make an approximate 80-90 degree change of course, but in a world where people don’t like change, it is tempting to only make a small adjustment.  The result of such actions is that the boat goes “into irons,” in other words the boat is pointed directly into the wind and unable to make headway.  At this point, the person at the helm has to reverse course and return to the original tack, allowing the boat to obtain enough speed so that the maneuver can be tried again.    Likewise, with a church, sometimes only small corrective steps are taken instead of bold new directions, leaving the church in a position where it isn’t moving forward and where, as with a crew on a boat, people blame everyone and everything else for the problem.  As with the boat, it is important that the blame game stop and corrective steps taken so that forward progress can resume as the sails fill with wind.

Sailing gracefully is an art, as is ministry.  It requires skill, good communication, a common understanding of the objectives, and a willingness to show grace when things don’t go like you plan so that the organization can quickly resume a course toward its goal of sharing Jesus’ love, showing his grace, and making disciples who can come aboard and help sail into a new future.   As congregations, we need to be ready for when God sends us the wind, so we might hoist our sails. It also helps and we should be confident for we serve a Lord who commands even the wind and the sea! (Mark 4:41).