A lot of students have fantasies of having teachers locked up. For my 5th grade teacher, it wasn’t a fantasy, it was a horrific experience. As a Marine embassy guard in China, which was behind enemy lines when the war began, he spent the entirety of the 2nd World War as a POW. This is a review of a book he later wrote about this experiences.This review originally appeared in my other blog and has been slightly edited. 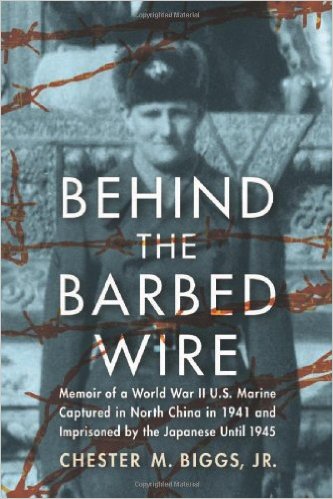 The author as an embassy guard in China.

On the morning of December 8, 1941, the Marine guards at the American consulate in Peiping (Beijing), China woke up behind enemy lines. Overnight (on the other side of the International Date Line), the Japanese had attacked Pearl Harbor. The Japanese had invaded China several years earlier and the American consulates in China were now inside territory held by the Japanese army. Although it was a tense situation in the Far East and war was not out of the question, the Marines were caught unaware. They were in the process of packing up and were days away from being withdrawn from China (many of the military members and diplomats of other consulates such as Britain had already been withdrawn). As the war began, the ship sailing to North China to pick up the Marines turned south and those left behind were prisoners of war. They would spend the entire war as POWs. One of these Marines, PFC Chester Biggs, the author of this book, was also my fifth grade teacher. Mr. Biggs would spend 20 years in the Marine Corp (1939-1959). The latter half of his life he spent in education. And, until his death, he would spend time teaching and answering questions at the Special Forces POW classes taught at Fort Bragg. He died in December 2011 at the age of 90.

The book begins by describing the events of December 8, 1941.  Only hours before the Marines awoke, Japan attacked Pearl Harbor. The Marines have no idea what is happening or that the day meant war. The Japanese surround the compound, disarm the sentries and forced their surrender. Biggs, a young man of 20, finds himself as a POW. The next two chapters, Biggs describes life in Peiping before the war. China had been at war with Japan for years and the area of the consulate had been securely controlled by the Japanese. The situation in the countryside, where there were Chinese guerrillas fighting the Japanese, was tense and movement by American personnel there was limited. However, inside the city, where there was quite large contingent of foreigners, life continued as normal. Peiping, at least in the international section, was a cosmopolitan city with Europeans, Russians and Americans living there. During this time, there were fancy parties and even premiers for movies such as “Gone with the Wind.” There were some tension with Japanese soldiers, but with the exception of a few incidents, it appears much was done on both sides remain calm. After the one incident, US military personnel were restricted to a few clubs near the compound.

At first, after the surrender, the main change that the Marines noticed was a loss of freedom of movement, the loss of their Chinese workers (they had Chinese laborers that did many of their task from laundry to shoeshines to manicures) and a reduction in food. Even though they were confined to the compound, one Marine who had girlfriend in the city slipped out and then came back undetected. The NCOs tried to impress upon the Marines of the serious of such actions, but two others slipped out and were caught. Although the Japanese had said anyone caught attempting to escape would be shot, they were not. As Biggs noted, the Japanese could and would be brutal, but their behavior wasn’t always consistent, and at times they surprised everyone. At the end of January 1942, the Marines in Peiping were transferred to Tientsin and were later transferred to a POW camp near Shanghai. Before the transfer, the Japanese allowed a Marine from Tientsin to marry his English fiancé before they were moved to Shanghai. During Christmas 1942, the Japanese allowed an American restaurateur who ran a famous establishment in the city to prepare a Christmas dinner for the POWs. This was the last great meal they enjoyed. Before the next Christmas, all expats in the city including this man were confined to concentration camps by the Japanese.

At first the Marines who had been on diplomatic duty were hopeful they would be exchanged and freed. The diplomats in China were exchanged six months into the war. Such hope began to wane as they were placed into a POW camp in Shanghai that included Marines and civilian contractors from Wake Island and British sailors on a ship captured in a Chinese port at the beginning of the war among others. Interestingly, in 1943, they were joined by Italian Marines stationed in China. As a part of the Axis powers, they we left alone. But once Italy surrendered and declared war on Germany, members of the Italian military in China found themselves as POWs bunking with Americans and British POWs. In the Shanghai area, the Marines were held in two different camps. They were worked hard and the Japanese capturers could be incredible brutal. The POWs did what they could to keep their spirits up and Biggs tells many incredible and sometimes humorous stories of survival and endurance. There was even a radio which provided a little news of the war (which was spread via rumor for no one was to know about the radio).

In 1945, the POWs were locked into rail cars and shipped north and then down through Korea. Their travel was hard. In Pusan, they were placed on a ship bound for southern Japan. Once on Japanese soil, they were shipped by train north. Although they could see only a little (the Japanese had covered the windows of the trains) there were enough cracks through which they realized the devastation done to Japanese cities from American bombings. They knew the war couldn’t last much longer. The Marines were taken north, to Hokkaido, where they were put working inside coal mines. This was brutal work and from the book I have the sense it was the worse time of Biggs’ entire imprisonment. The Americans were split up and sent to smaller camps where they worked in teams with a Korean miner underground. After the Japanese surrender, the POWs stayed at the camp as American planes dropped supplies. It was well into September that Biggs had his first airplane flight in his life as he was being moved from Hokkaido to Yokohama. However, bad weather forced the plane to turn back. He would later take a ship south and then on to Guam where the POWs were seen by doctors and navy intelligence officers who record their experiences.  From Guam, they were flown across the Pacific, with stops for hospital visits at Honolulu (to be checked for infectious diseases and parasites) and then on to a hospital in San Francisco.

Mr. Biggs was 18 when he left his home in Oklahoma for the Marine Corps training base in San Diego. He was 24 when he returned home on an extended leave after having been a POW for over 3 ½ years. I found this book to be well written and to give great detail of everyday life in a POW camp. I wish I had read it while Mr. Biggs was still alive.