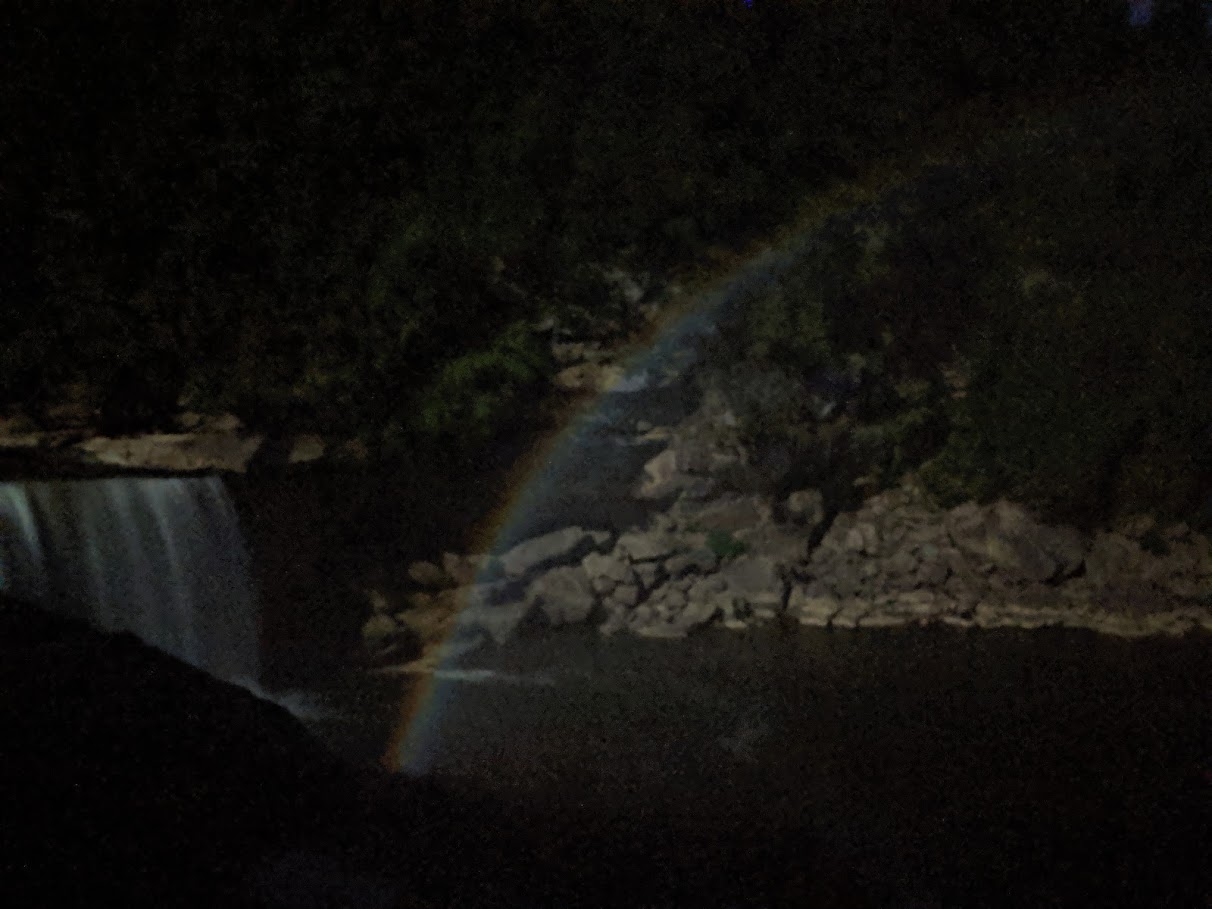 It’s been a while since I had a post on my activities, so I decided I’d do a full moon to full moon post. The August full moon occured on the 15th, and I was at Cumberland Falls, Kentucky. It was a clear night and those who came out to the falls an hour or so after the moonrise, were treated with seeing a “moonbow.” It’s just like a rainbow, except it is more whitish, appearing a little like a ghost of a rainbow. The moonbow occurs in the spray from the falls, which also creates a lovely rainbow in daytime, as you can see from the two photos I’ve posted. 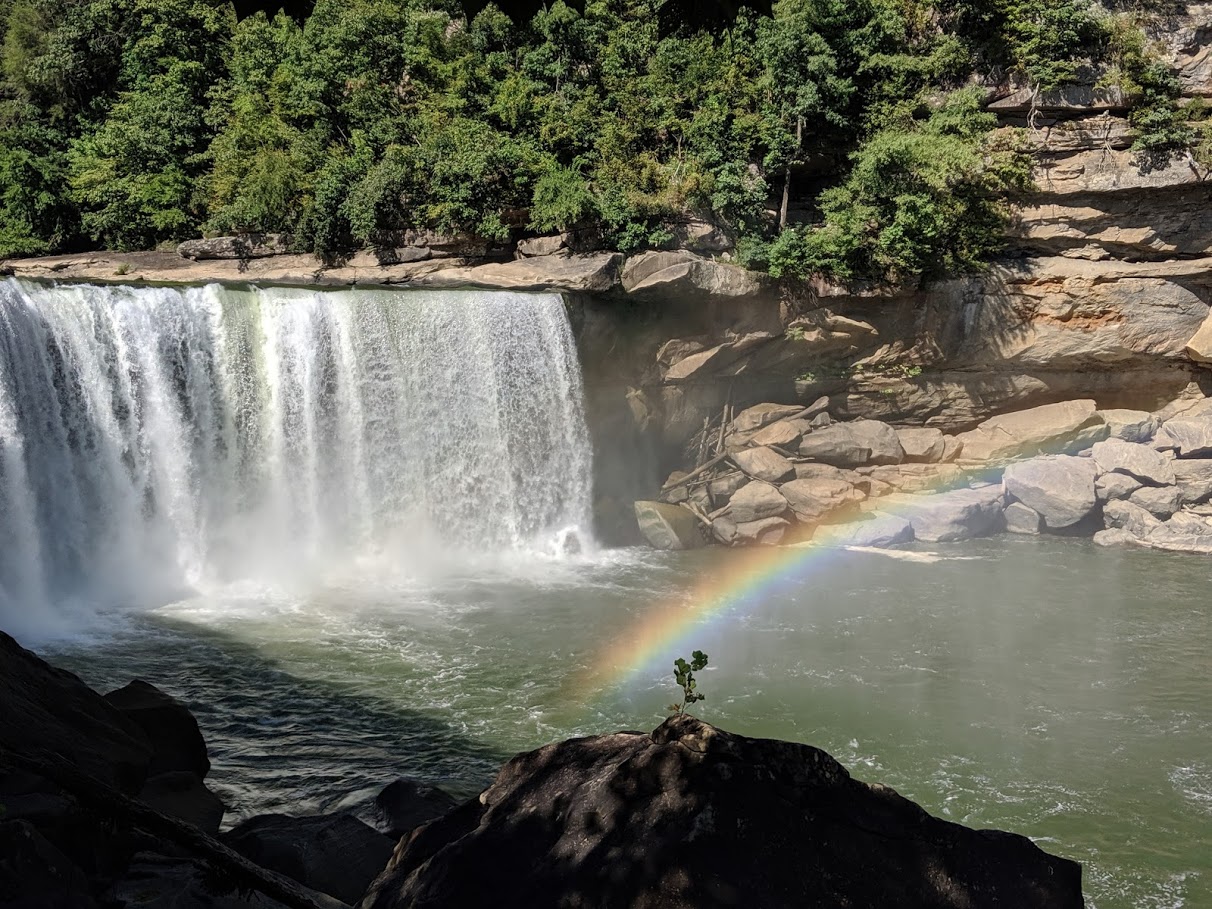 Rainbow the next morning

From one of the historical markers around the site, I learned that the Cumberland River was named by Dr. Walker, an early explorer in the area. According to him, the river was the crookedest he’d seen, so he named it after the Duke of Cumberland because it reminded the explorer of the Duke. 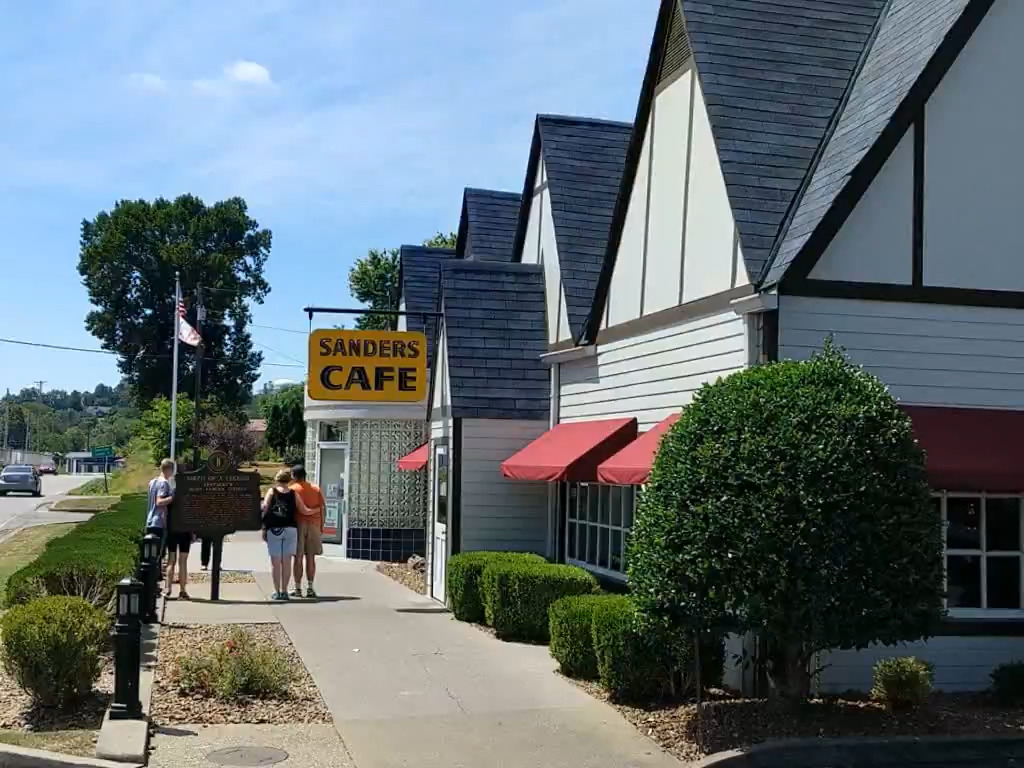 Leaving Cumberland Falls, we headed toward Cumberland Gap. It was about lunch time when we hit Corbin and we decided to have lunch at Colonel Sander’s place. The original restaurant and hotel was torn down, but they rebuilt a Kentucky Fried Chicken on the site many years ago. In addition to the children and biscuits, three was a small museum showing how it was back in the 30’s. It’s also a major stop on the old Nashville and Louisville Railroad, so I had time to watch a few trains. 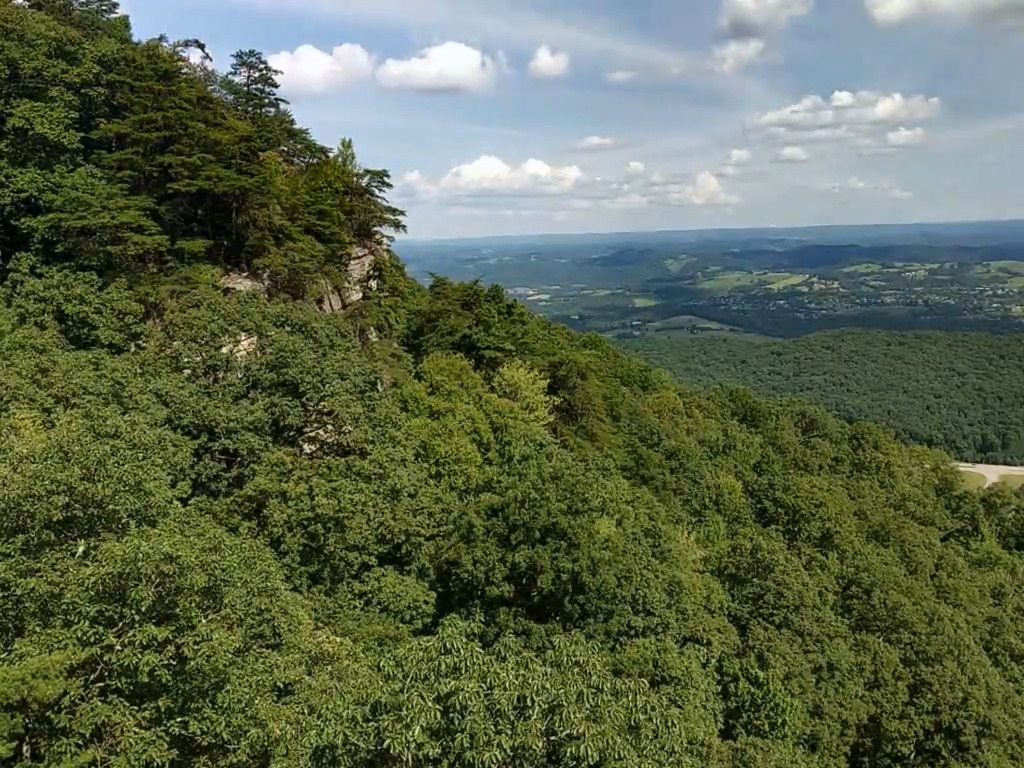 At Cumberland Gap, we rode the bike/horse part of the Wilderness Road. We needed Daniel Boone, for it was rough with several down trees. Also, after a long downhill run, we crossed a small bridge and at the other end, a horse had relieved himself. It took some maneuvering to miss that pile of crap! We enjoyed the delightful town of Cumberland Gap which has an interesting bicycle museum and several good coffee shops/restaurants.  I had my first beet burger at the Pineapple Tea Room and Coffee Ship. It was good! Camping, we also ate good as we picked up in a rural grocery store some rib-eyes to grill. They were local and grass fed and it was some of the best meat I’ve had in the eastern part of the country where all the meat tends to be corn-fattened. 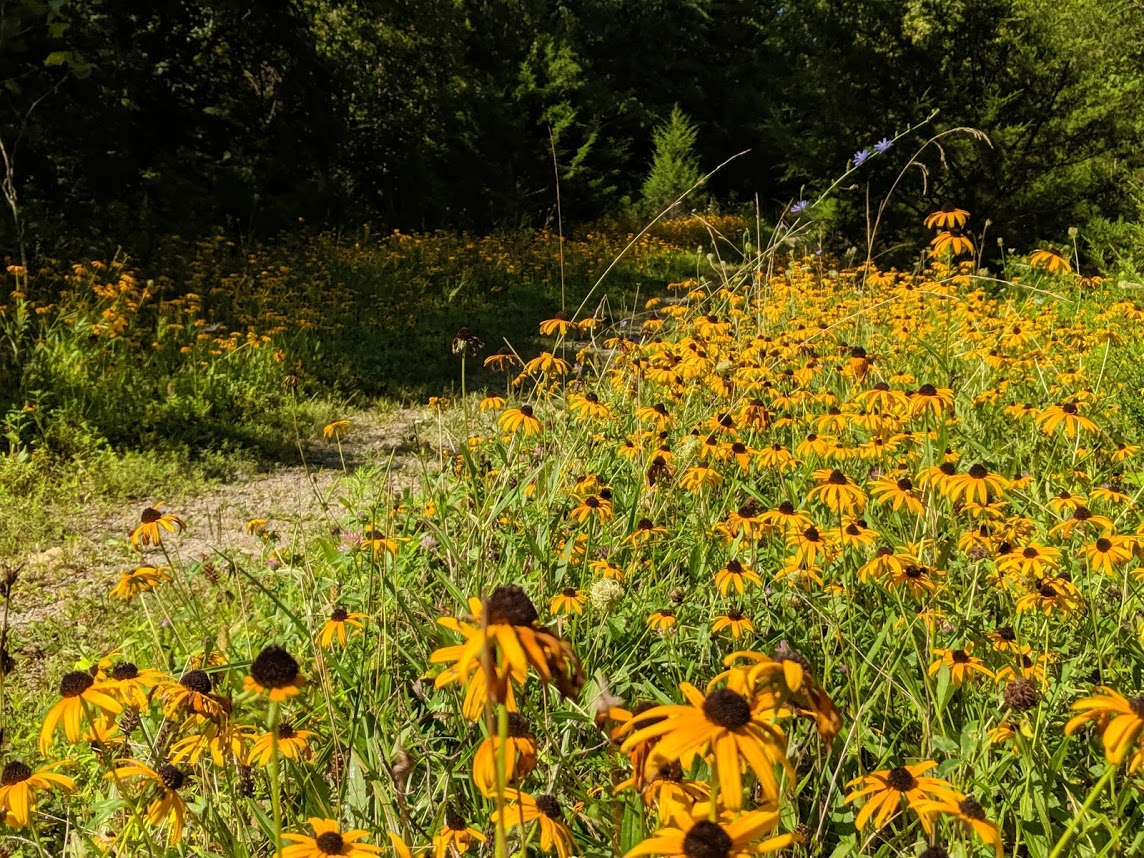 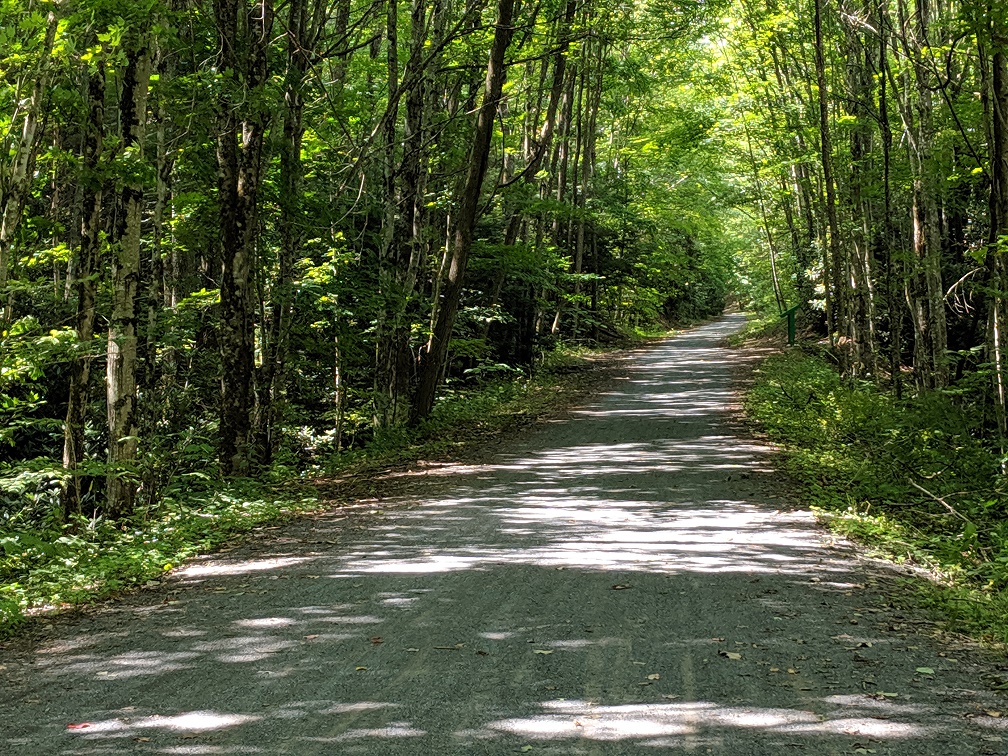 After a couple of nights at Cumberland Gap, we headed over to Abingdon and Damascus for the purpose of riding the Virginia Creeper trail. We found a wonderful camping spot (with a cucumber tree, which I had to look up to identify).  I enjoyed being back in this country, as it’s been well over thirty years since I came through here while hiking the Appalachian Trail.

The Virginia Creeper is a neat trail that follows an old railroad bed from Abingdon to Whitetop, Virginia, and on to Todd NC. The train stopped running in the mid-70s, and in the 80s, it was converted to a bike trail. Where were lots of people on the trail. You can catch a shuttle from Damascus to the top of Whitetop, which we did. There were several shuttles running every hour. Talking to a driver, I learned that during the fall color season, there are as many as a dozen vans an hour coming up to the top!  It was a nice and easy ride. I stopped and walked a bit on the Appalachian Trail for old time sake (but the AT has been relocated here since I hiked this area, so I wasn’t exactly walking in my old steps. 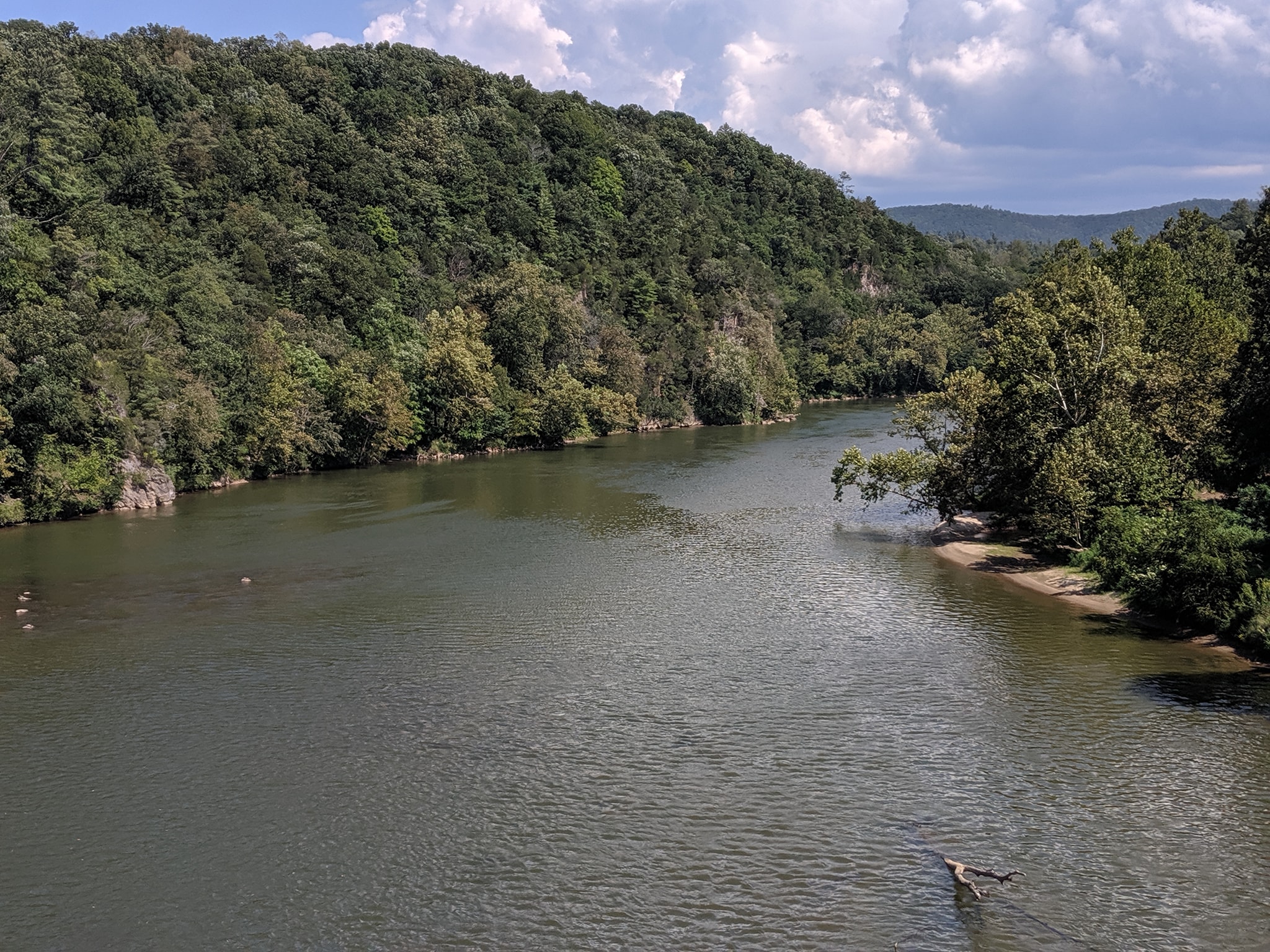 New River as seen from an old trestle

Leaving the Damascus/Mount Rogers area, we headed over to the New River State Park, where the state of Virginia runs a fifty some mile long linear park along the New River from Galax to Pulaski.  We road the trail from from Galax to our site, about 28 miles, which made a nice day. But this trail involved more peddling than the Creeper trail in which you could almost coast the whole way. 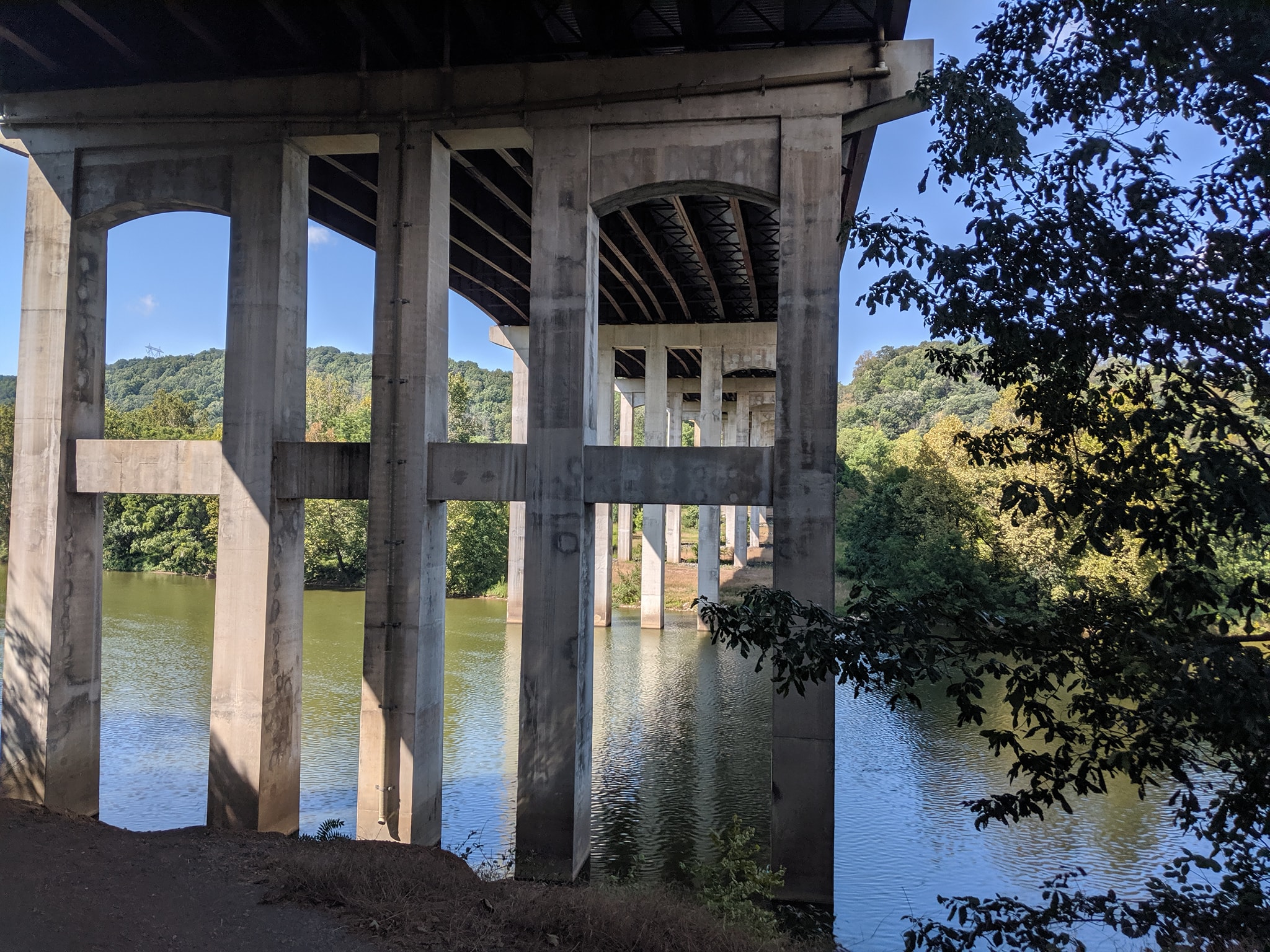 I-77 bridge over the New River 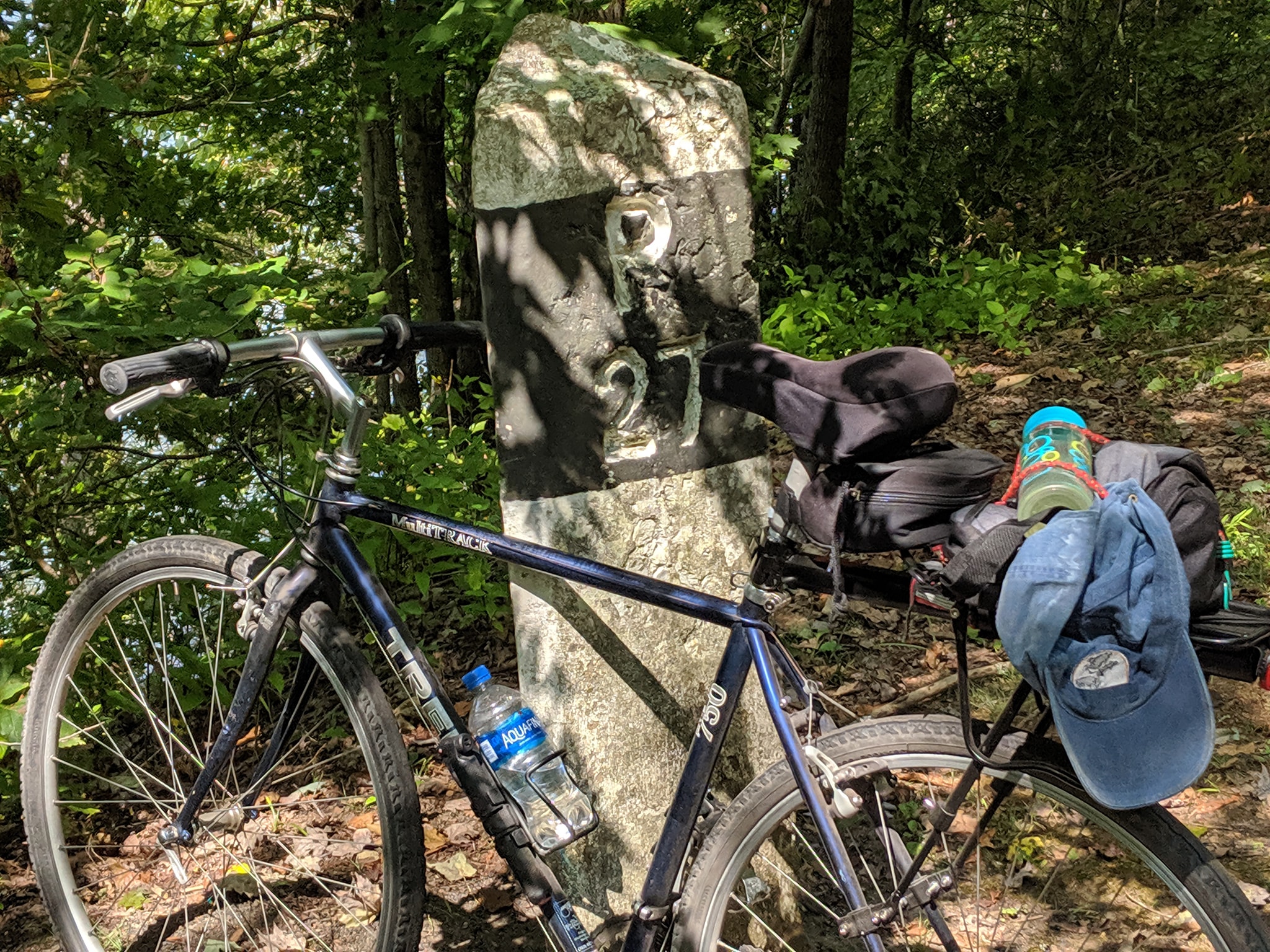 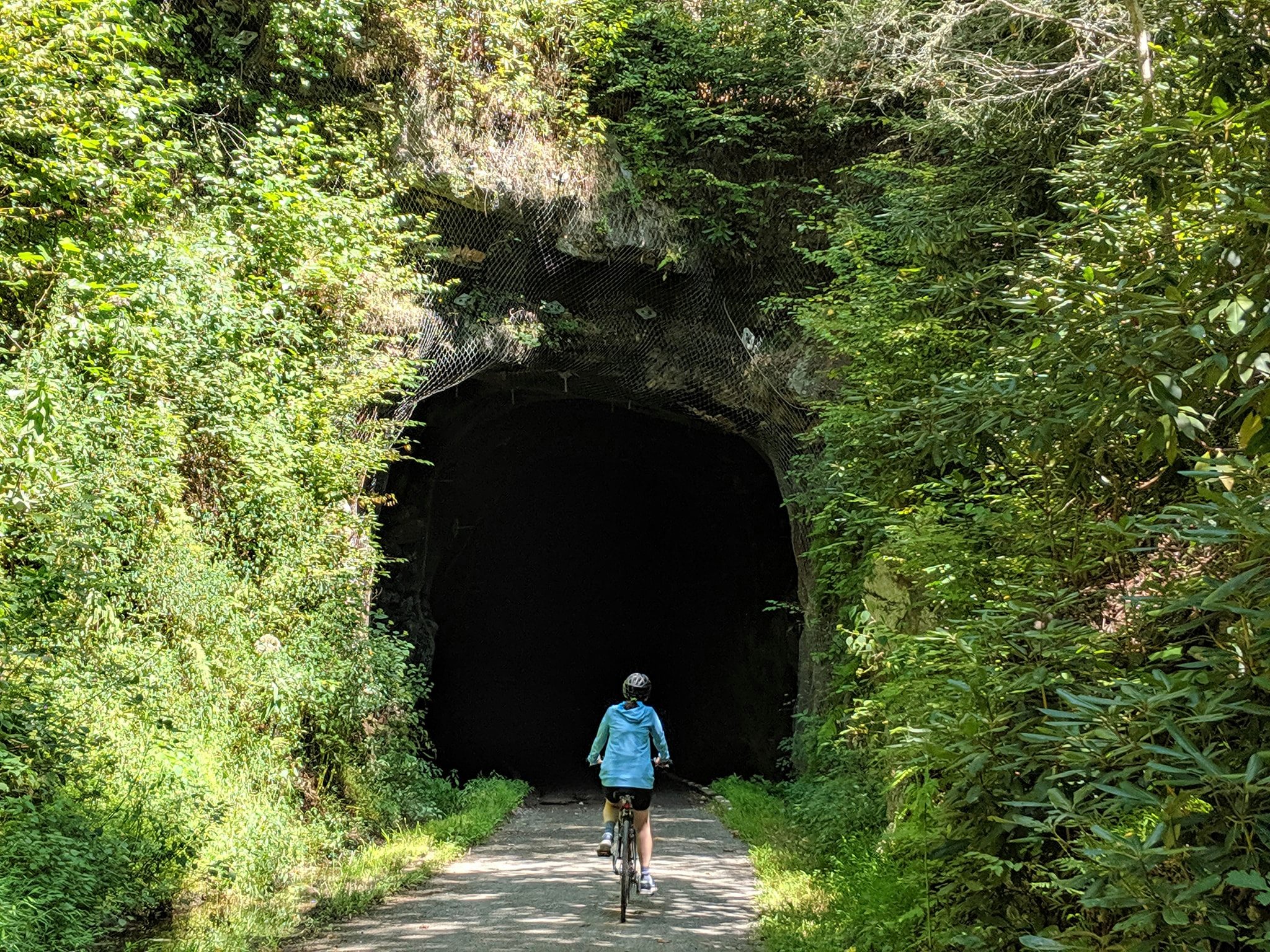 One of two tunnels on the trail 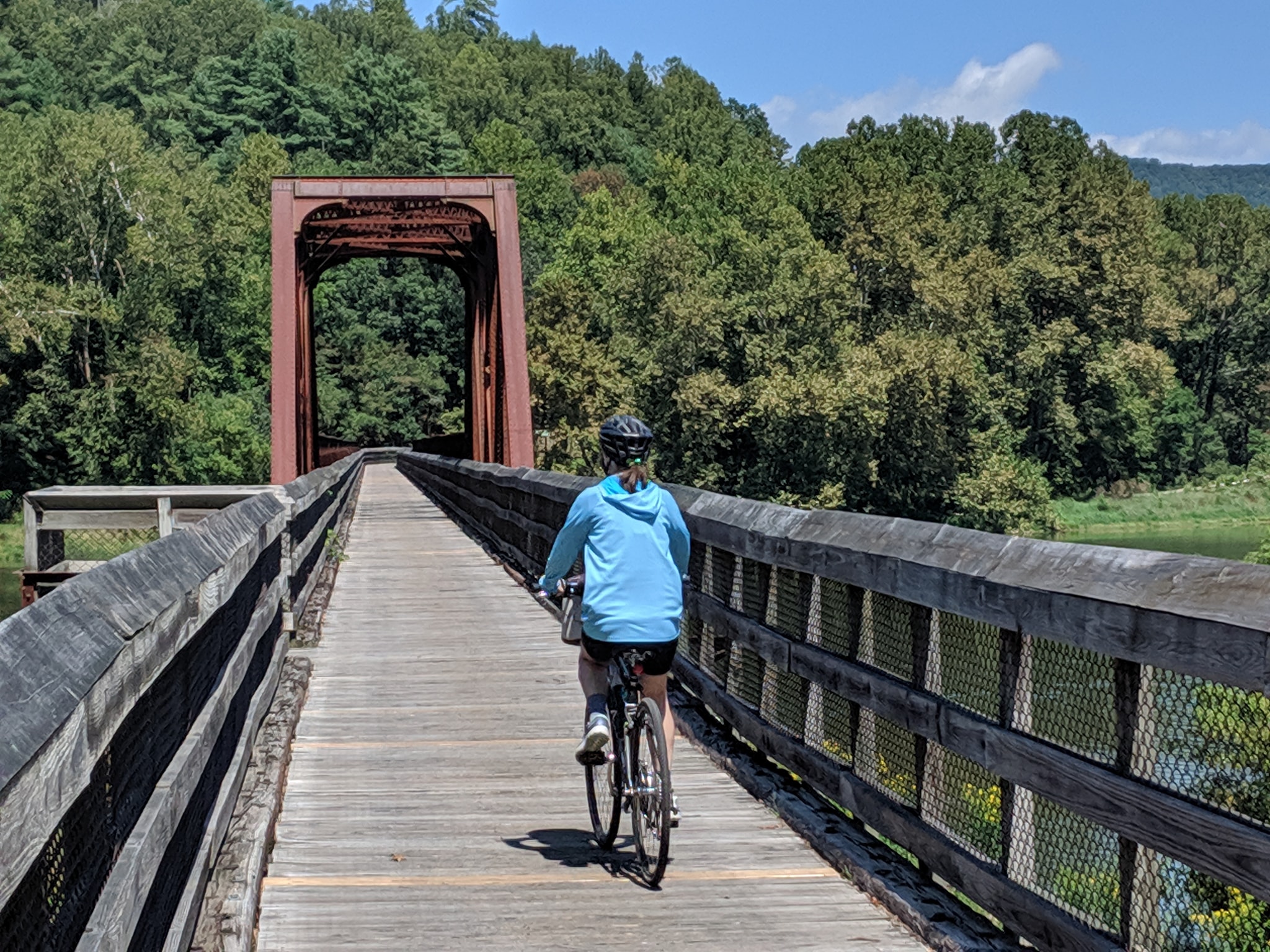 One of many trestles along the New River Trail 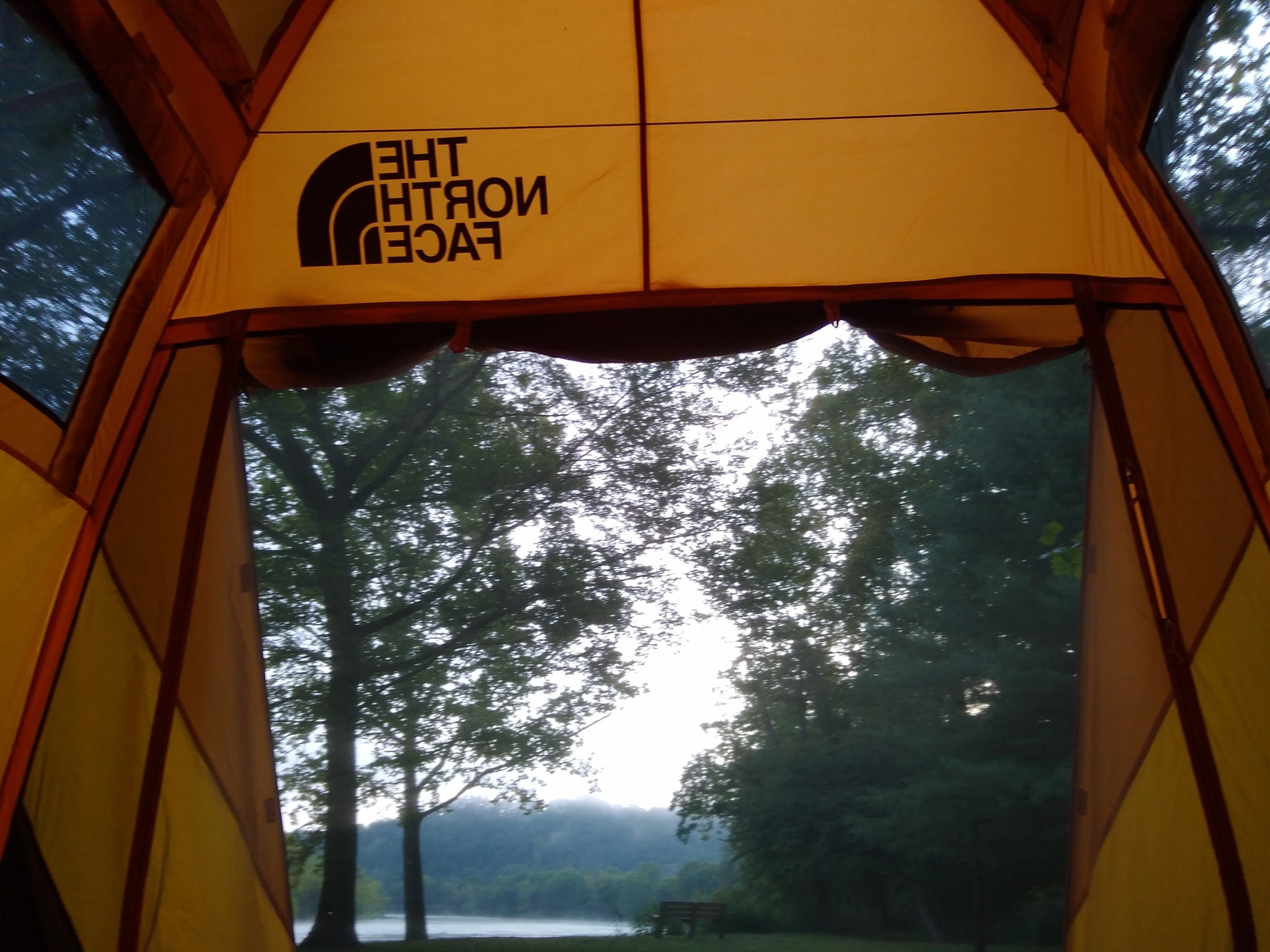 The campsites are rather expensive for pit toilets and no showers ($25/night), but we loved our site. It was just steps from the river and we had the place to ourselves. We slept to the sound of water running over rocks (augmented by the sounds of birds, frogs, insects, and the wind). It was a wonderful place to camp. And every evening, I took a swim in the river. 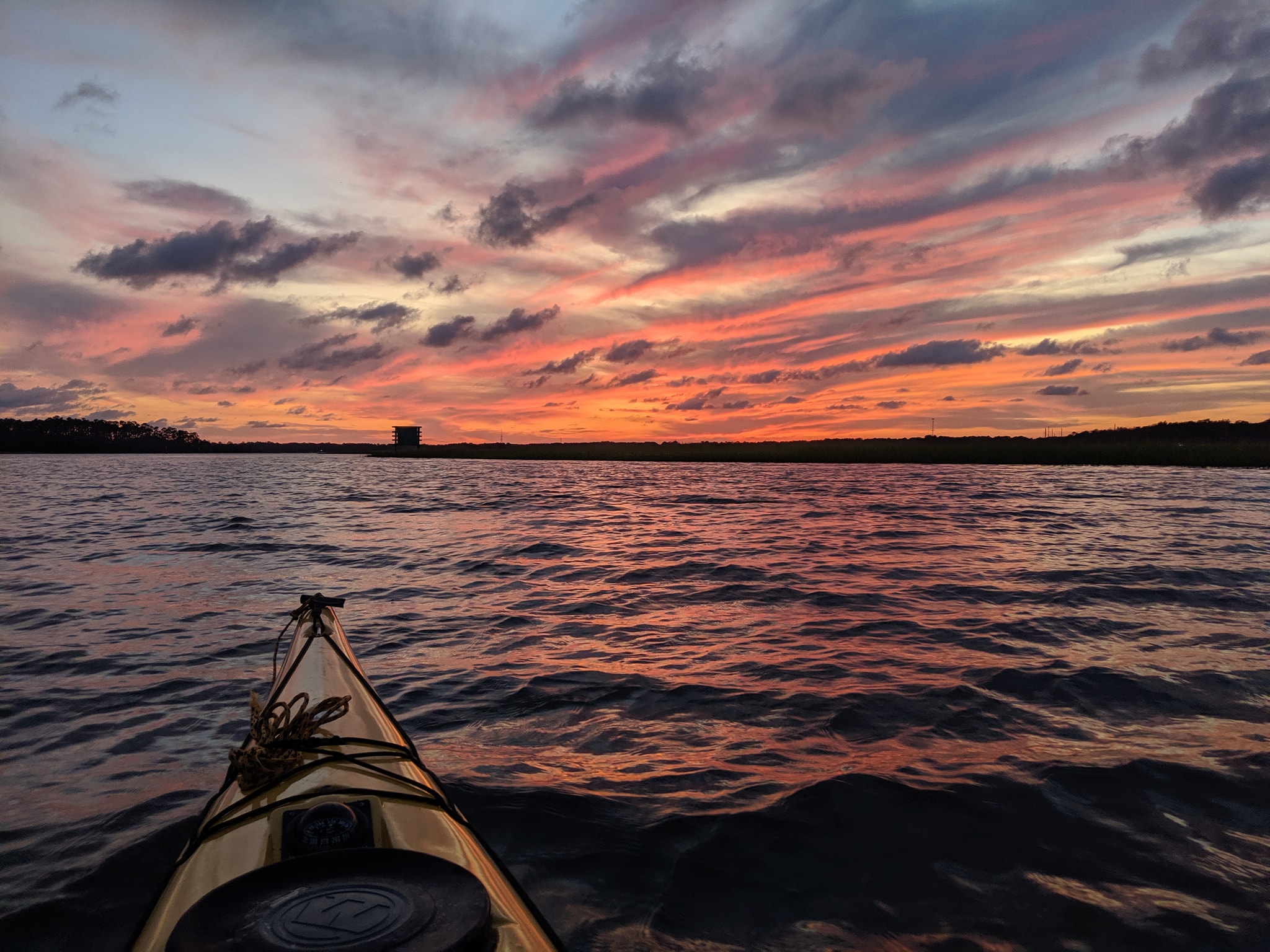 After getting back and having a hurricane threaten, another full moon came around. This time, at home and on a semi-clear evening, I made the best of it by paddling around Pigeon Island (about 6 miles). It was a magical evening starting with incredibly red skies and then the beauty of the moon. 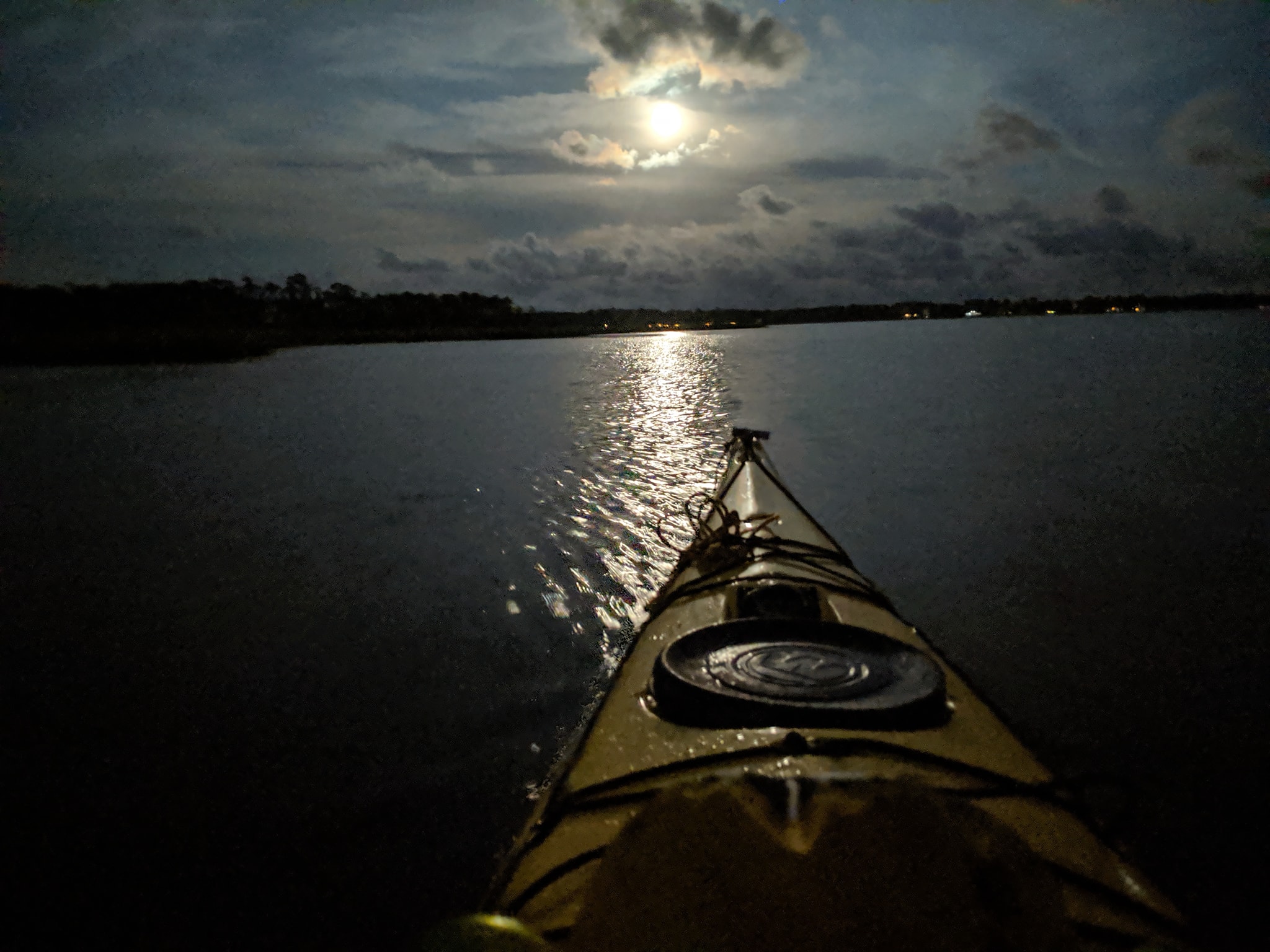