With the storms we’ve been having, Donna and I decided to go to the movies on Labor Day to see “A Walk in the Woods.”  After all, I’ve hiked the trail and read and laughed through the book.  Although I enjoyed the book, I always felt a little superior to Bill Bryson,  for he only hiked some 800 miles of the trail and I have done the whole thing.  But Byrson is a talented writer who can make most any mundane thing funny.  In the book and in the movie, Bryson decides to hike the trail after moving back to the United States from Great Britain.  In the book, if I remember correctly, he and his English wife decides to move back in other to allow their children a chance to experience both countries.  Bryson was in his 40s at the time.  In the movie, a much older Bryson (played by Redford at 79) has older children and grandchildren.  In both the book and the movie, he has a hard time finding a hiking partner.  In the movie, he calls a former acquaintance whom he discovers is dead.  His wife reminded him that his wife had shared that news in their Christmas card, which allows Redford the line that went something like: “I guess that’s why she seem miffed when I called him.”  Much of the humor in the movie were similar one-liners.

Bryson finds a partner in Katz (played by Nick Notle), whom he had traveled in Europe after high school.  He hadn’t seen Katz since and when he gets off the plane, Bryson can’t believe his eyes.  Katz is not only out-of-shape, but looks half-dead.  Katz is a gloomy but likable character who tells Bryson’s family some less than favorable stories about their dad, implying that he picked up a STD while they were traveling in Europe.  There is a sad scene while Katz is staying at Bryson’s home before they begin the hike.  Alone, Katz reviews all the various certificates and awards that his friend has received in his life.  It’s evidence of a life-well lived, which stands in contrast to Katz’s life of booze and drugs and women.  Later, on the trail, Katz seems surprised that Bryson has been faithfully married for forty years and then jokes that he’s been with more married women than Bryson.
On the trail, the two of them are constantly passed by younger hikers who all seem in shape (and way too clean to be backpacking, but this is a movie). There is Mary Ellen, a bubbly woman who has an answer for everything and drives the two of them crazy.  I remember such characters on the trail and ways we tried to dump them by either hiking fast or taking a short day and allowing them to get ahead.  There were also the “gear Nazis” who scrutinized packs, boots and other equipment.   Bryson and Katz experiences a snow storm but no other inclement weather (they hiked the whole time with long pants and flannel shirts, which in the month of May would have been too much clothing on most days for even then it can get hot in the Southern Appalachians).  There were no rain and thunderstorms (and no sweating on hot days).  I remember hiking in thunderstorms with other hikers.  We’d spread out so that if one of us was struck, the other could to attempt to resuscitate.   It would have been nice to have had a thunderstorm on the screen, for about half way through the movie, I could hear the rumble of thunder from outside and for a few minutes the rain poured down so loud so that we heard it inside the theater.  I was reminded I was better off at the movies than on outside.

Although Katz is seen as a womanizer (a trait that seems to be in conflict with his looks), we learn that he had given up alcohol.  He admits how much he enjoys drinking (the smell, the taste, how it makes you feel) but that he knows if he takes a drink, it will be all over.  After a rough life, he is now living alone eating TV dinners.The movie is rated R which is mostly for language which the two of them use frequently as a way to express frustration at their troubles. There are also a lots of sexual innuendos.  The one bear scene was weird (there were many more bear stories in the book).  The movie picked up some of the hikers routines such as relieving oneself in the woods (which the book spent too much time describing) and doing laundry in town (yes, I have done laundry wearing only rain gear).  At the laundromat, Katz encounters a flirty and very over-weight married woman, which necessitates the two of them slipping out of town before an angry husband kills Katz.  Laughing it off afterwards, Katz asks Bryson, “What is the chance that the only two people in the world who would go to bed with that woman be in the same town at the same time?”  Much of the humor is sophomoric in that manner. 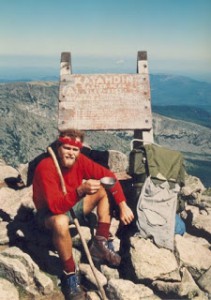 At the end of the trail, Mt. Katahdin, Maine

The movie ends with the two of them deciding to give up their quest and go back home.  They realize they don’t have to walk the entire trail for they have nothing to prove to anyone.   I agree with most of the critics that the movie doesn’t do justice to Bill Bryson’s book.  However, there is a value in the movie version.  We see the rewards of Bryson’s faithfulness and well-lived life.  Also, even though we understand that Katz’s wasted much of his life, we can cheer him on that he’s finally gotten it somewhat together (at least the alcohol, he still can’t help hitting on any woman who happens by).   The two help each other (Bryson, at one point, decides not to have a drink in front of Katz as not to tempt him).  If you can get beyond the language (which at times is over the top), the two lives in this movie create a classic “morality-tale” showing the value of virtue.