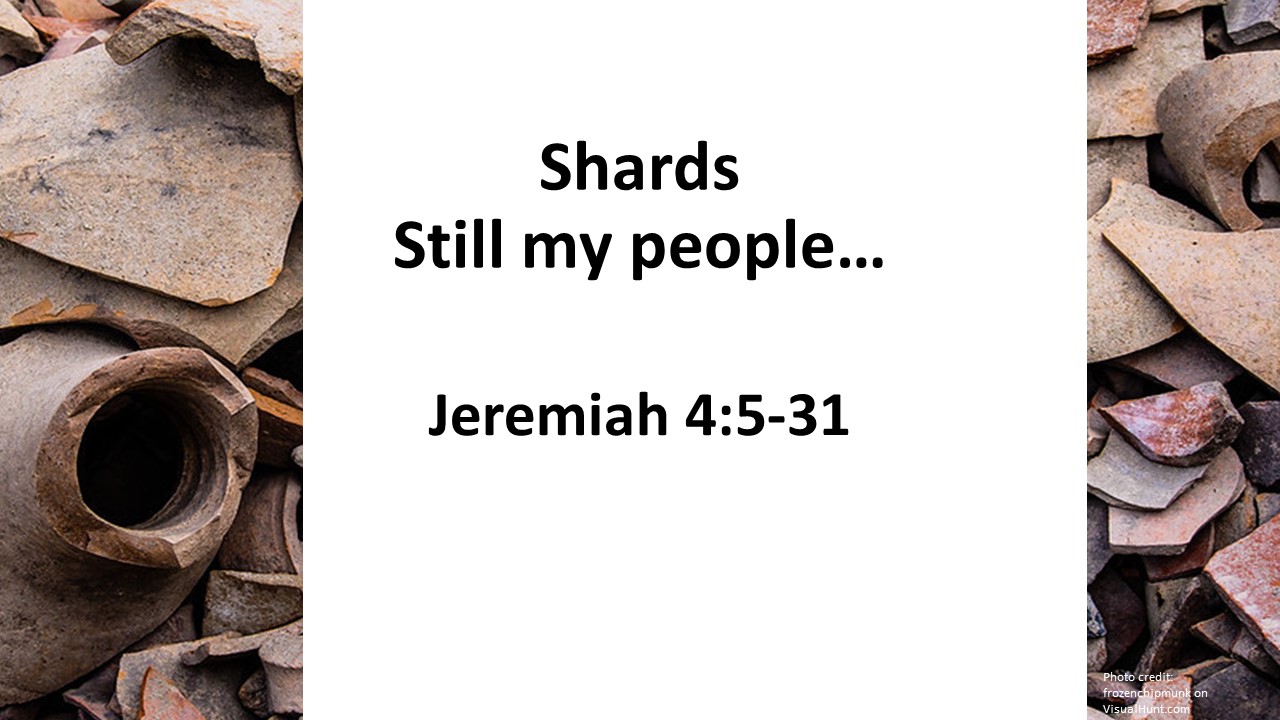 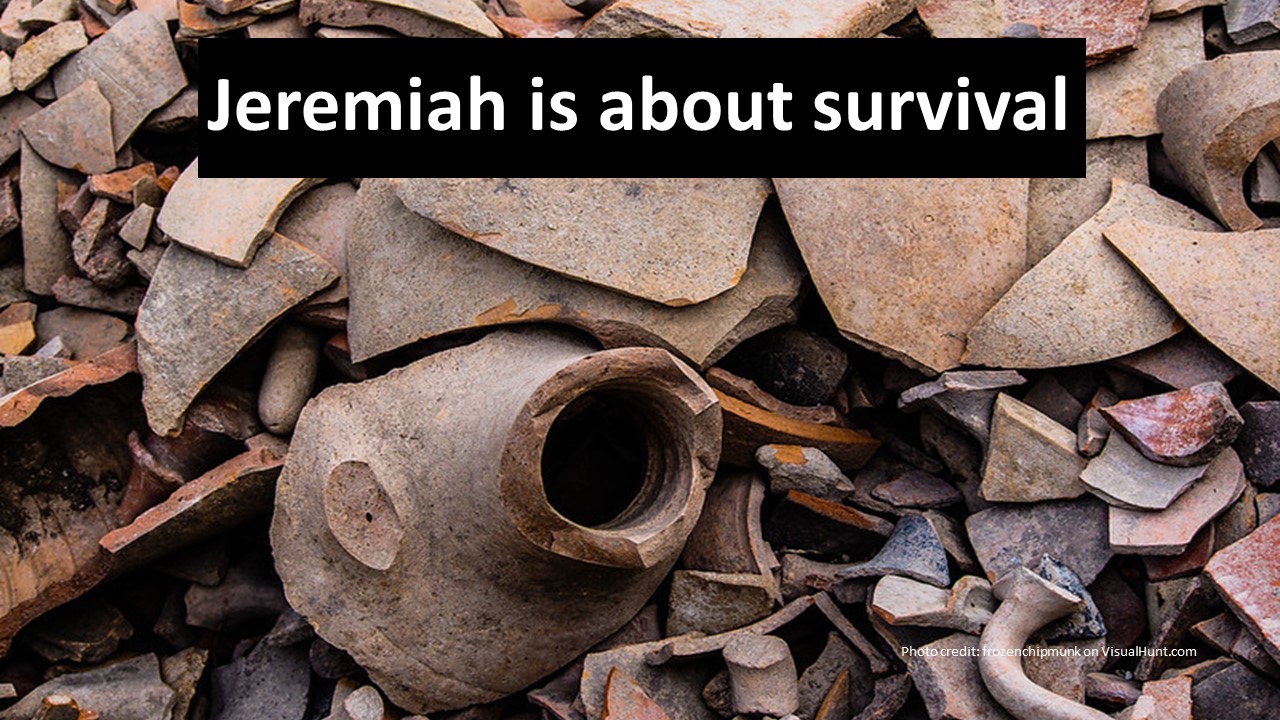 We’re back working through sections of Jeremiah in our series titled Prophecies and Pottery. And we’re moving backwards in Jeremiah. Two Sundays ago, we looked at what is probably the most popular passage in book, from the 18th chapter, Jeremiah in the potter’s house. If you remember, there was hope that Israel would repent and change her ways. But in this passage, in the fourth chapter, there is little hope. One of the overall themes of Jeremiah is survival.[1] How do God’s people survive when there is a collapse of the nation and religion? How do you survive when everything is lost?

Theologically, Jeremiah’s task is to defend God in the face of catastrophe.[2] The people have not trusted in God. They have placed their trust in other gods. They have sought out political alliances to save them. They’ve turned everywhere except to their God. Because of their insolence toward the God of Abraham, Isaac, and Jacob, the book is rather grim. God’s people are like broken shards. 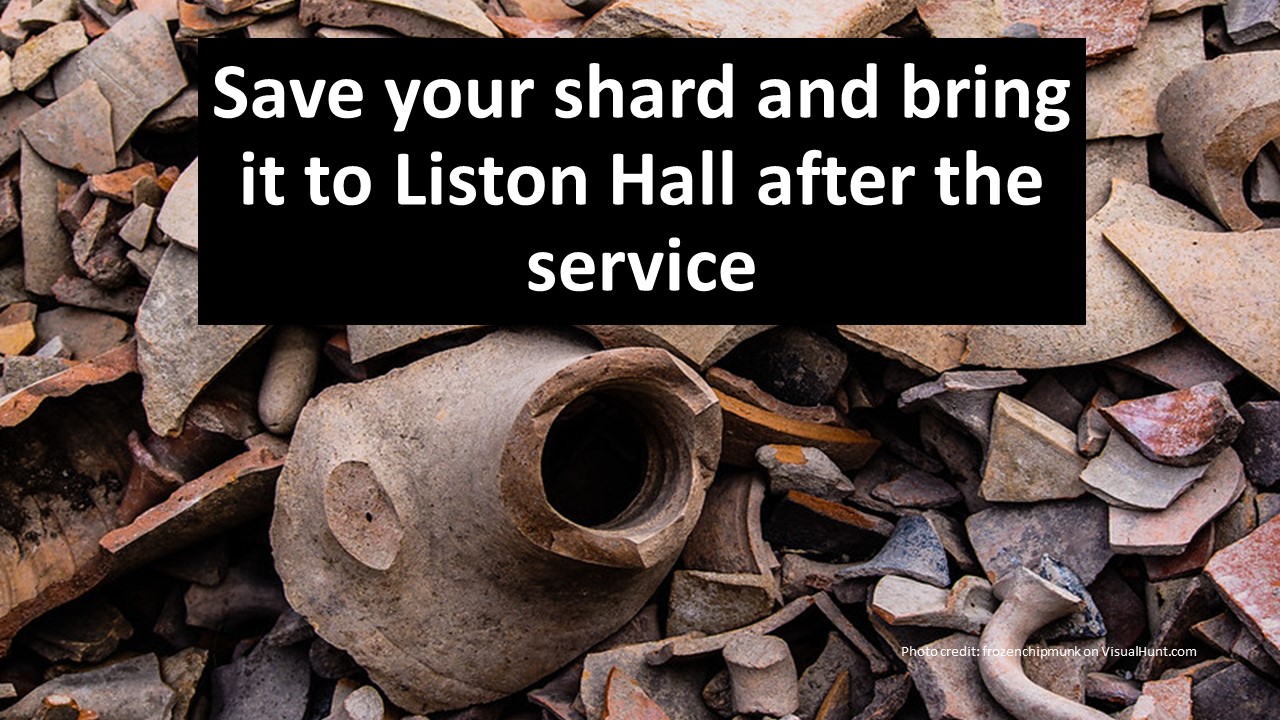 Beautiful pottery breaks. Today, during the sermon, hold on to the shard you’ve been given, and ponder God’s judgment. Think about what it means to be broken, unfixable. But don’t throw away the shard. When the service is over, take it over to Liston hall, where we’ll attempt to put it back together and see what kind of design Sue Jones created for us.

Let me say a little more about Jeremiah. The book is not laid out chronologically. The timeline seems to jump back and forth. Was this because the scrolls got mixed up at one point? Or, were they assembled this way for a reason? We don’t know. But it’s clear that while in the potter’s house, as we saw two weeks ago, there was still hope for God’s people. There is much less hope in this passage. Storm clouds are building. Today, I’m reading a just a selection of a larger passage that begin with the 5th verse in chapter 4 and runs to the end of the chapter. I encourage you to read the passage in its entirety, but I will only read verses 11-12, and 22-28. 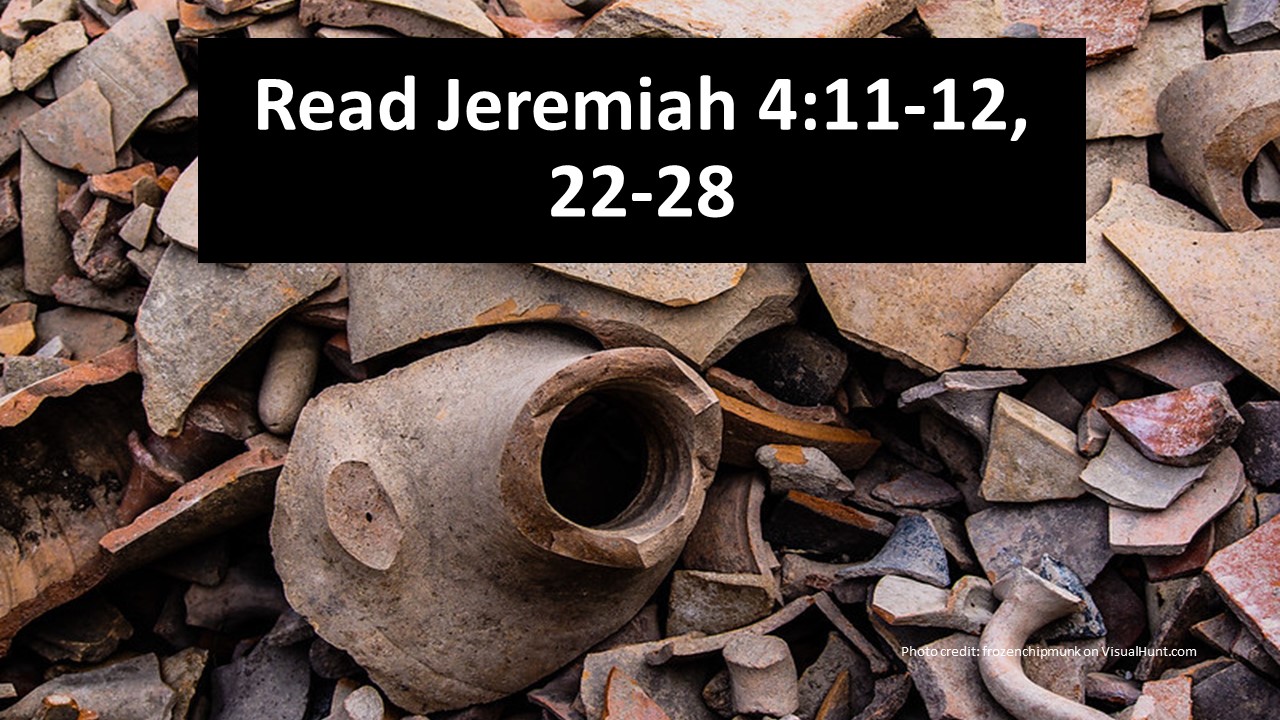 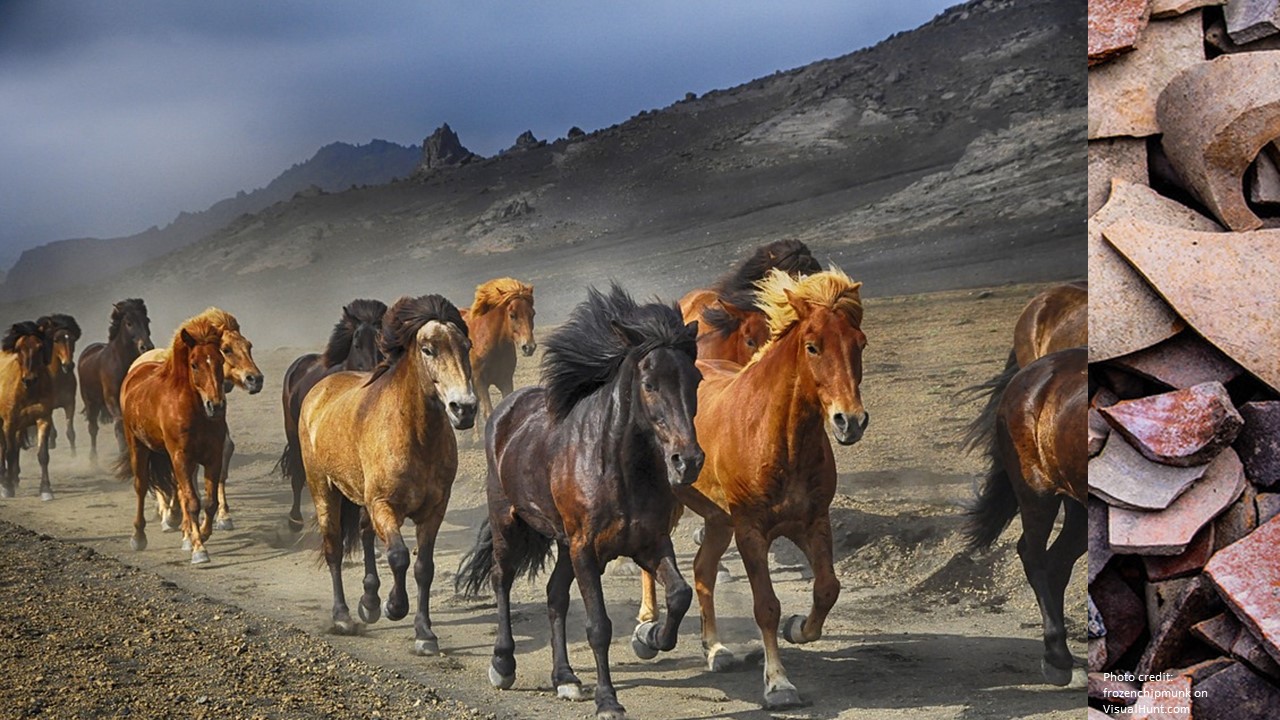 For the people of Jeremiah’s day, storm clouds are gathering. It’s not looking good. It’s kind of like that vision we get from the song “Ghost Riders in the Sky,” those wayward cowpokes who are eternally damned to chase the Devil’s herd. Storm clouds are always frightening. But let’s think about ourselves. 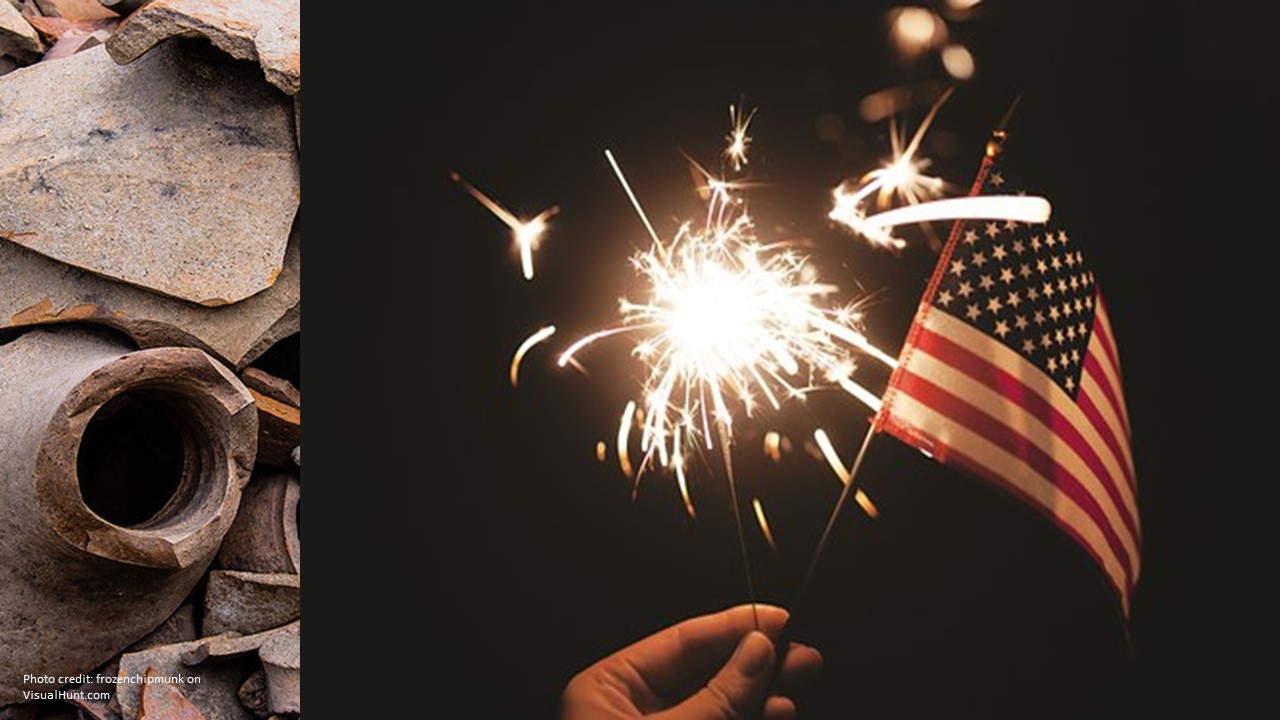 You know, we have blessed as a nation in that no foreign army has invaded us for over 200 years. The last was during the War of 1812. It’s been a century and a half since those of us who are from the South experienced the horrors of having towns and cities burned, armies destroyed, and people suffering. We can only image what it was like for the people in Savannah during that Civil War, hearing the distant bombardments of Fort Pulaski and Fort MaAllister, and then, in 1864, the rumors building fear as Sherman’s army approaches. 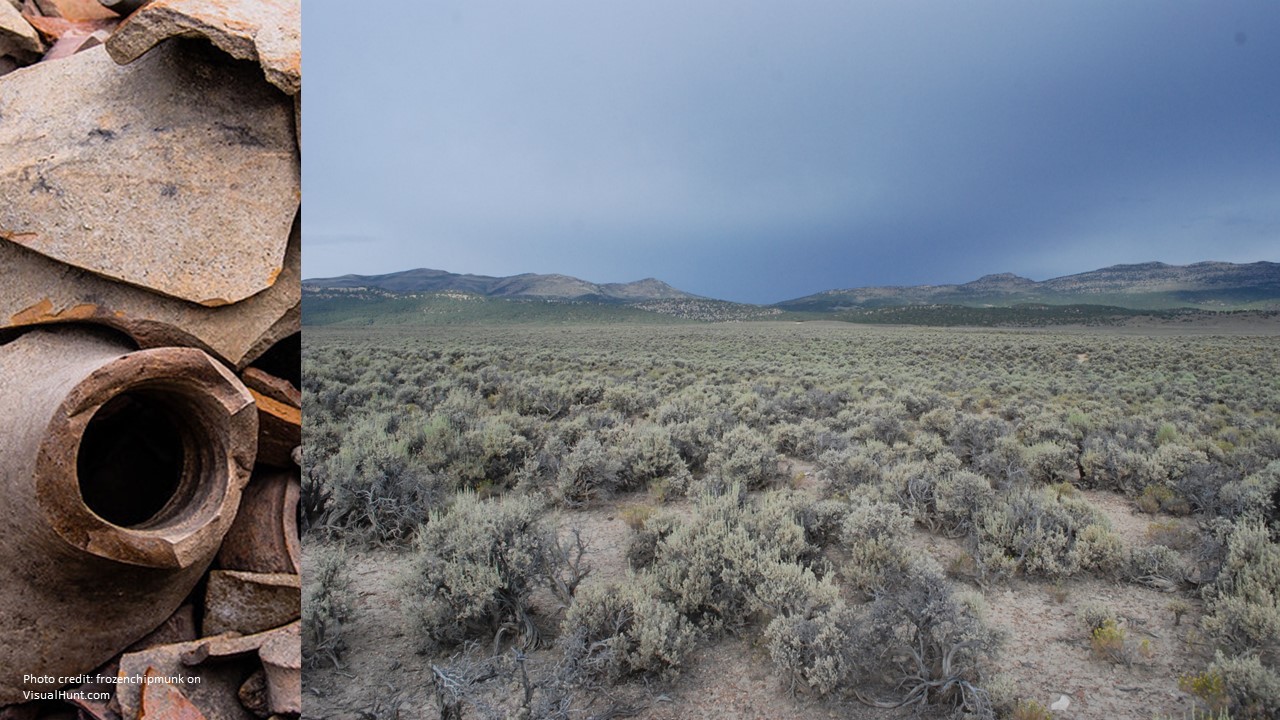 In this section of Jeremiah, the approaching Babylonian army is described as a hot wind blowing up a frightful dust cloud off the desert. This could be like the dust clouds off Africa that eventually turn into hurricanes that threaten our coastline. In the part I skipped, we hear how the rumors begin to filter down to Judah and Jerusalem, starting way to the north, above the Sea of Galilee, in the territories of Dan. We know a similar drill with hurricanes as they approach the Leeward Island and the Lesser Antilles and the Puerto Rico, Dominican Republic, Cuba, and the Bahamas as the storm makes its way across the South Atlantic. Sometimes these storms are like Jeremiah’s vision, bringing total destruction. Just as we hurt seeing the damage Dorian caused the Bahamas, we also worry what might happen to us if the storm doesn’t turn, Jeremiah is bothered by his vision. He can see it happening and cries out in anguish. But despite the heartache of what he sees, he faithfully proclaims God’s word. 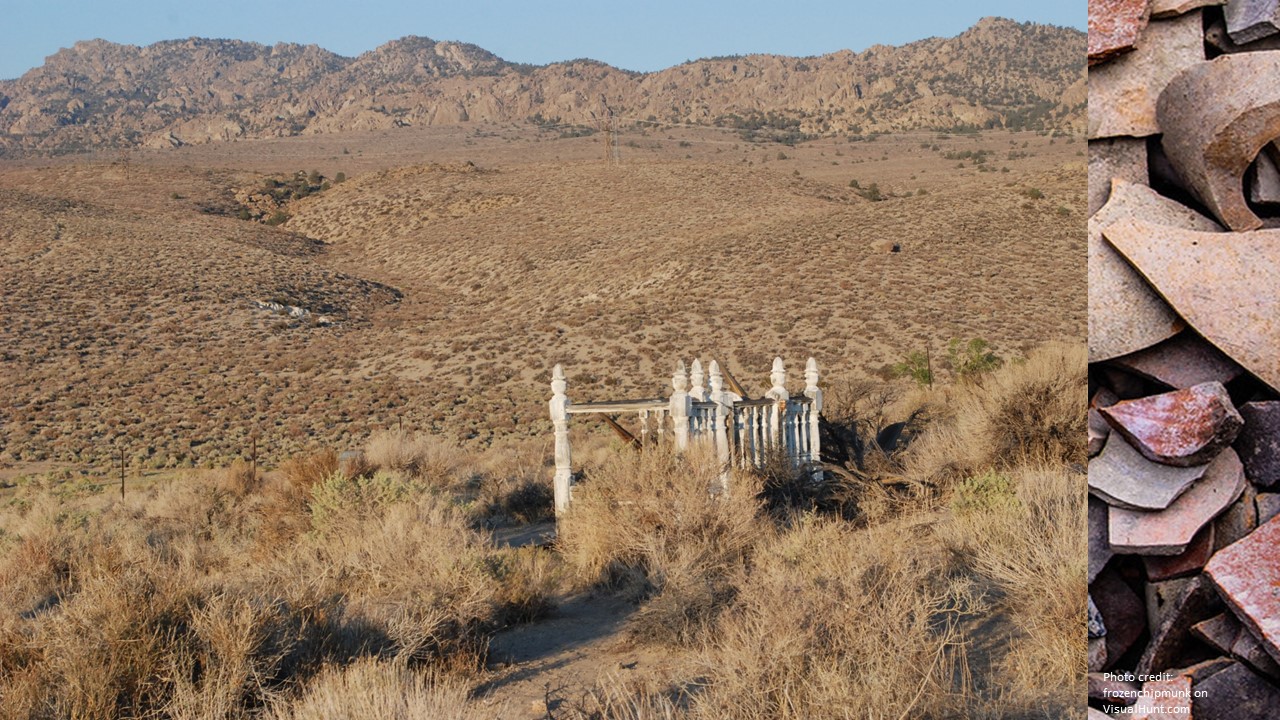 The second part of my reading describes the aftermath. Destruction is total. Starting with verse 23, the poem recalls the “dismantling of creation.”[3] The land is depopulated and void and without light. There is little hope in this passage for judgment is total… well, almost total. At the end of verse 27, we get a glimpse of hope. After God promises to make the land desolate, we read that God “will not make a full end.” In other words, a remnant will survive. God will continue to have a few to survive, after all they are God’s chosen people, in order to re-populate the land. So, there is hope, just not much. And everyone, including Jeremiah, will suffer. 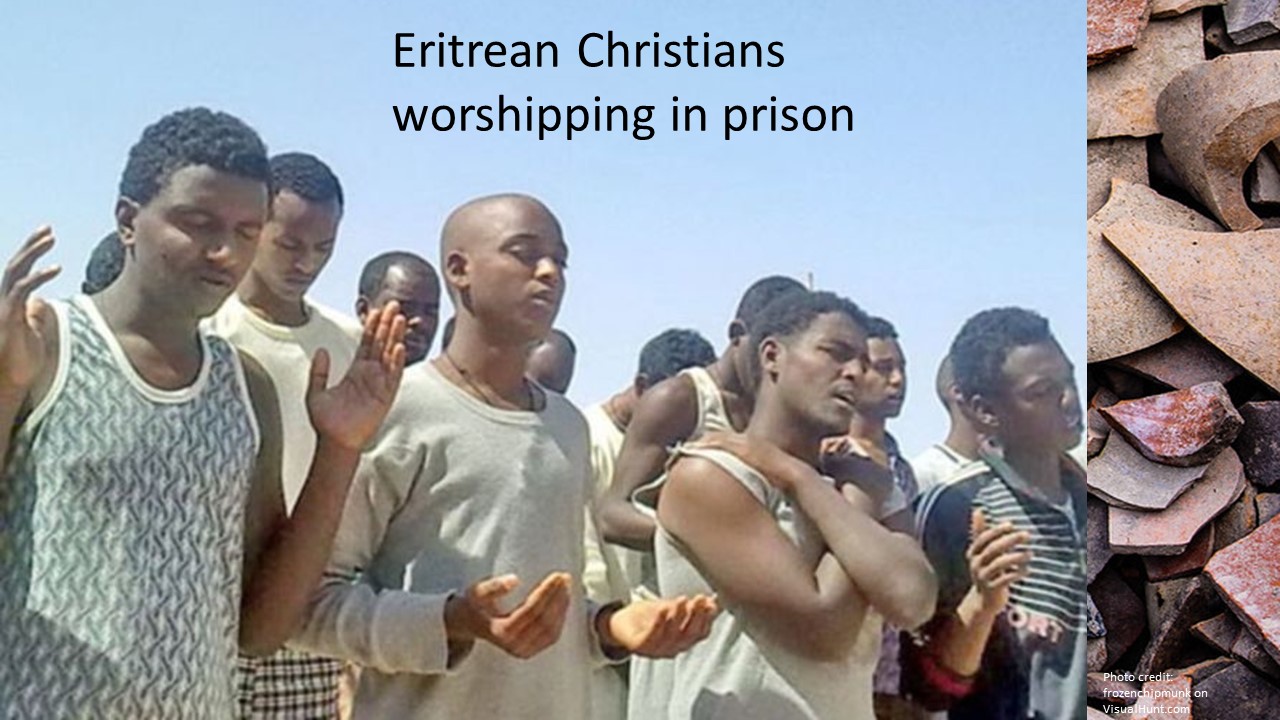 For Christians living in America, we may have a hard time relating to Jeremiah’s vision. But many Christians, those living around the globe in places where it’s dangerous to worship Jesus, recognize Jeremiah’s anguish as their own. For them, gathered around this table on World Communion Sunday, they are in danger. They know what it means to worship in fear, to experience the loss of jobs, of their homes and their land because of their faith. They know what it means to be locked up, to be tortured, and to watch loved ones be taken away and never return because of their faith. Christians are suffering in China, in Eritrea, in North Korea, in Iran and Iraq, in Syria and parts of India. We must stand by those who do not enjoy the freedom to worship as we enjoy it.

We must also realize as bad as life gets on earth, there is always hope. It may be just a glimpse. Jeremiah’s vision of destruction was so troubling that it affected him physically.[4] He knew what was coming was terrible, yet he never gave up on God. For as bad as things were get, he trusted that God was present and, eventually, things would change for the better. 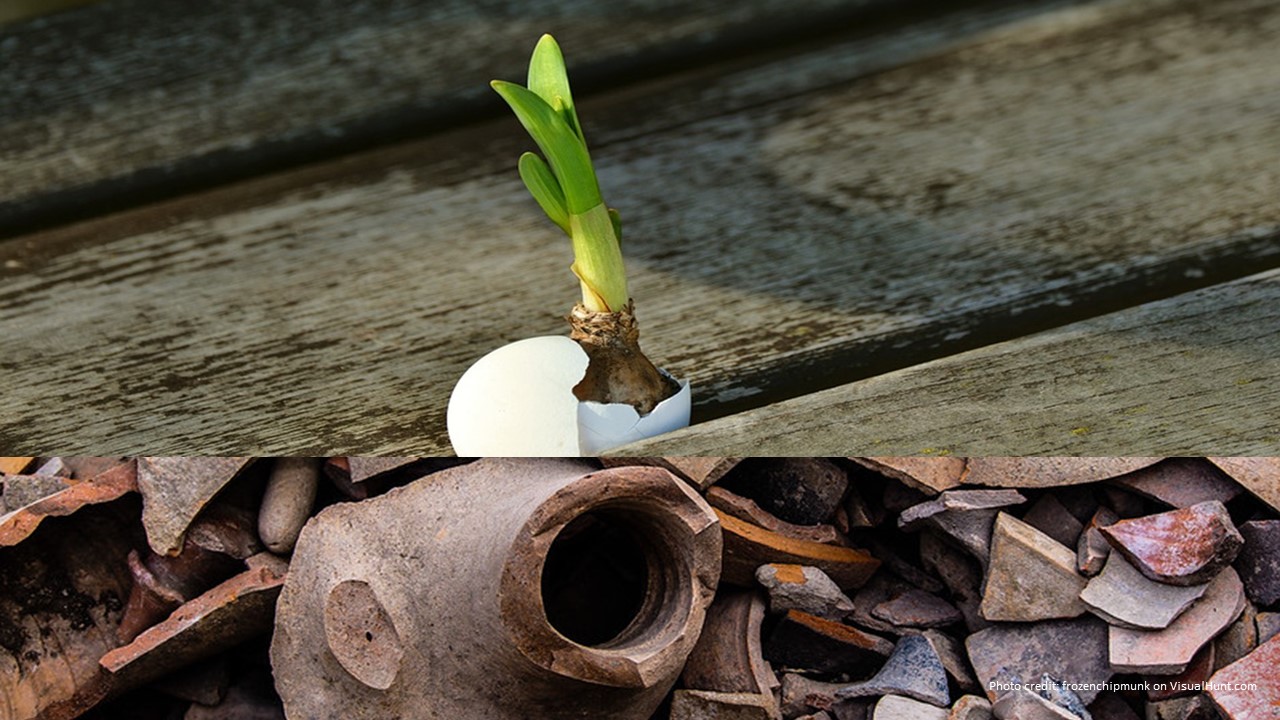 Remember, we have an insight Jeremiah didn’t have. We know about the resurrection, how the grave is not the end. Jeremiah knew that somehow God’s destruction wasn’t going to quite be total. We know that even if it appears total, as it does at death, as when we peer down into the grave, God is still God and the end is not the end.

Yesterday I did the funeral for Gerry Baumgardner. We heard about how Gerry was a reader and instilled her love for books into her children and grandchildren. I’m not sure she read horror, and I’ve only read a few such books. But when you read a good horror book, you are excited to finish and find out what’s happens, but you also don’t want it to end. But it must end. Sooner or later we have must put it down and be done with it. In a way, life is like that, except that when it’s over, God is waiting with a sequel. But, unlike with a horror book, the sequel will be beautiful. 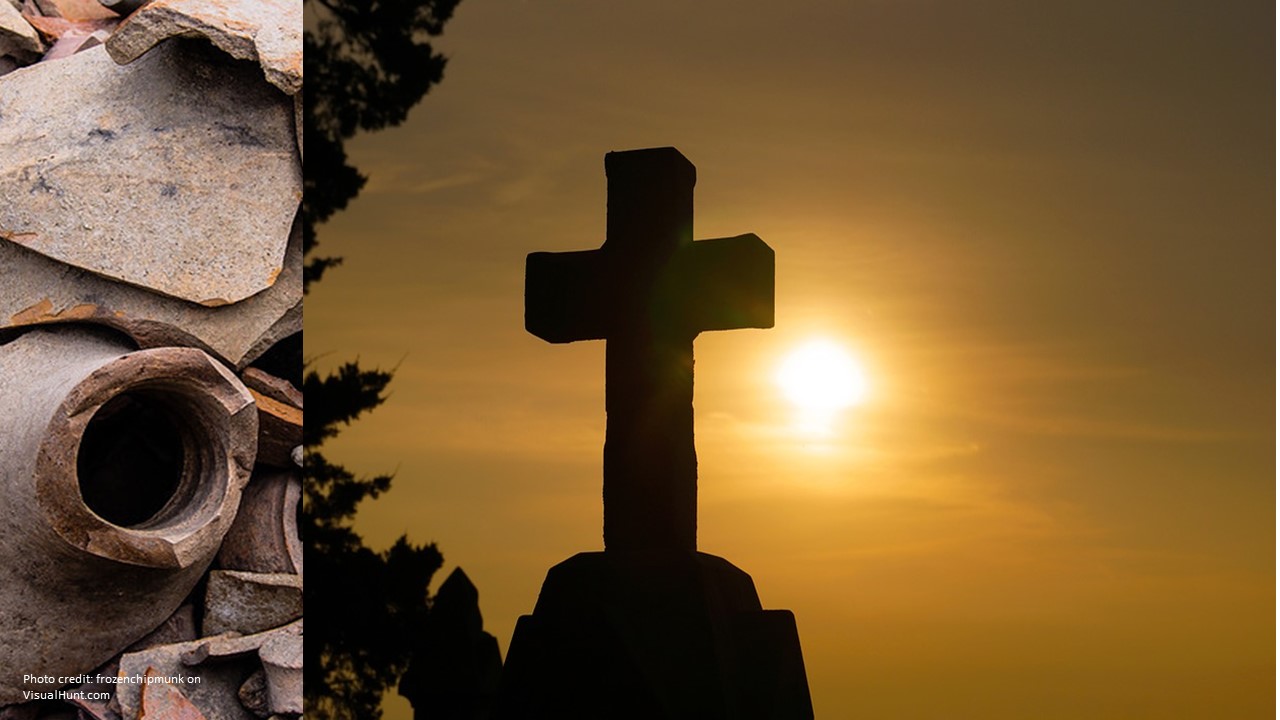 The center of the gospel is the hope we have in the resurrection to eternal life. And for that reason, we can face those storm clouds. We can face the stampede of Satan’s herd and the cowboys running roughshod across the skies, and know that as bad as things are, there’s hope. We may feel like we’re just broken shards of pottery, but God has the power to make what’s broken new and whole. Believe in God. Hold on to such hope. Amen.

[4] Verse 19, which is translated in the NRSV as “My anguish, my anguish! I write in pain!” is an attempt to capture the vivid description of the Hebrew in which Jeremiah cries of pain in his bowels. See J. A. Thompson, NICOT: The Book of Jeremiah, (Grands Rapids: Eerdmans, 1980), 227-228.