On October 4th,  Skidaway Island Presbyterian Church will celebrate Jeff’s 25th anniversary of ordination.  Following the service on Sunday morning, there will be a special reception in Liston Hall and that evening there will be a community dinner, along with entertainment, in honor of Jeff.    Our Church has traditionally given a Love Offering to mark occasions of significance for our pastor.  Jeff has asked that this Love Offering be applied to the building of a school in North India, where Pastor Chandan Kumar Sah has been working to both share the gospel and to better the lives of those living in this impoverished area of India.  This is a project supported by the Presbyterian Frontier Fellowship, an organization that works to reach those who have not heard about Jesus Christ.  Jeff’s friend, the Reverend Cody Watson, is in charge of their South Asia missions, which include India. 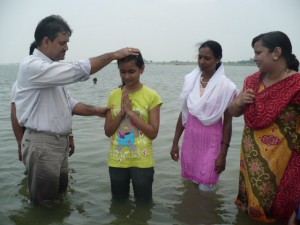 Pastor Chandan Kumar Sah heard the gospel for the first time in 1992.  In 1997, he organized a ministry, registered it with the Bihar government, and began planting churches.  At first, it was a slow start.  By 2008, they had planted only five house churches with a total of 56 believers.   However in 2009, he planted an additional six house churches, and things began to take off.  In 2010, he started “Empower Believers Network.  Today, his ministry has started 224 house churches with over 2000 believers.  All are self- sustaining.  Encouraging the work of others entrepreneurial Christians in Bipar, four elementary schools have been started with over 300 students.  His goal is to increase the number of students to over 1000 and to expand schools through the 12th grade.  This Love Offering will go toward building a school in this region.  In this part of India, using local labor and materials, a 3000 square foot school can be built for $20,000!

Literacy in the Bihar and Jehanabad districts of India is very low, especially in the rural areas.  The region hasn’t benefited from the recent economic boom of India.   PFF and its partner ministries have a successful history of growing schools in these areas, along with empowering the local people with skills which allow them to work and to generate income.  While building a better life for themselves, they support the growth of the church and its efforts to engage with the community for educational and social transformation.  The teachers in the schools are also “disciple makers” as they share their faith with the students.

Pan India, his trust in the ministry of Cody Watson, and his belief that “churches like ours, working in partnership with local congregations in underdeveloped areas of the world, can make a big difference in the lives of others.”  This is one more way to show the face of Jesus to the world.