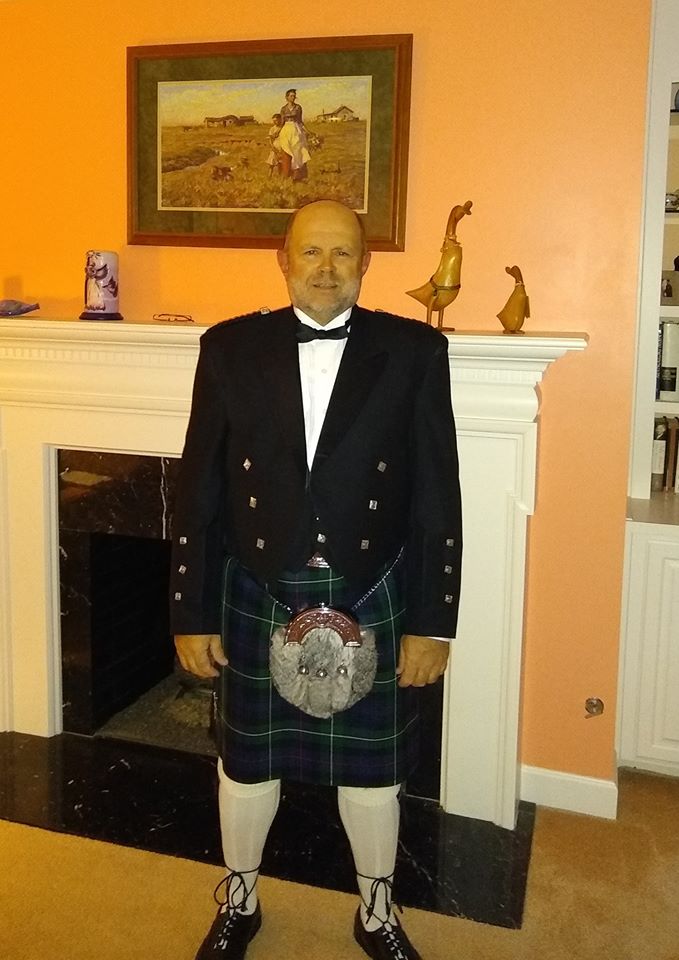 Yep, that’s me, decked out in formal threads with a McKenzie tartan kilt

A talk given at the St. Andrew Society for the City of Savannah’s Annual Banquet

The title for my talk this evening is “A Glorious Defeat.” By the time I’m done, I hope you understand what I’m talking about.

Alistair noted in my introduction that I’m from North Carolina. Like most Tarheels, I’m proud of my heritage. This pride is especially true of those of us of Highlander lineage. We take after St. Andrew, whose name in Greek implies manliness, valor, and bravery. We struggle with humility.

Of course, there is no Garrison clan. The Garrisons may have even been carpetbaggers for all I know. (actually, they were in NC around High Point before the Civil War). My great-grandfather Garrison moved into the land of the Highlanders of North Carolina early in the 20th Century. Twenty years later, his son set his eyes on a McKenzie girl. They married and had a son, who would later marry and have a son, and that’s where I come into the story. But if you look back through my family, you’ll find a lot of Scots blood: Blues, Blacks, McDonalds, McCaskills, McLeods, and such. But the McKenzies are on both sides. My paternal grandmother was a McKenzie, as was my maternal great-grandmother. I wear this tartan honestly and pray the inbreeding isn’t too damning.

So, why are there so many Highlanders in North Carolina? One former governor of the Old North State proclaimed there are more Highlanders in North Carolina than any other country, including Scotland. I’m not sure that’s the case, but for some reason, Highlanders began pouring into the colony in the early 1730s, long before the Battle of Culloden.  And actually, they didn’t settle throughout North Carolina. They mainly settled along the Cape Fear River and its tributaries. The Lowlanders mostly stayed close to the coast, while the lands to the west and north were settled by Scot-Irish (which sounds like a badly blended whisky).

Why did so many Highlanders head to the Sandhills? After all, it’s nothing like Scotland. There are no mountains or sweeping shorelines and the weather tends to be fairly mild. Two things: First of all, as beautiful as Scotland is, especially the Highlands, it’s not the best country to farm. These early Scot settlers were drawn to the rich land without rocks. It’s a lot easier to plow sand. This land that was abundant and cheap (after all, they were Scots). 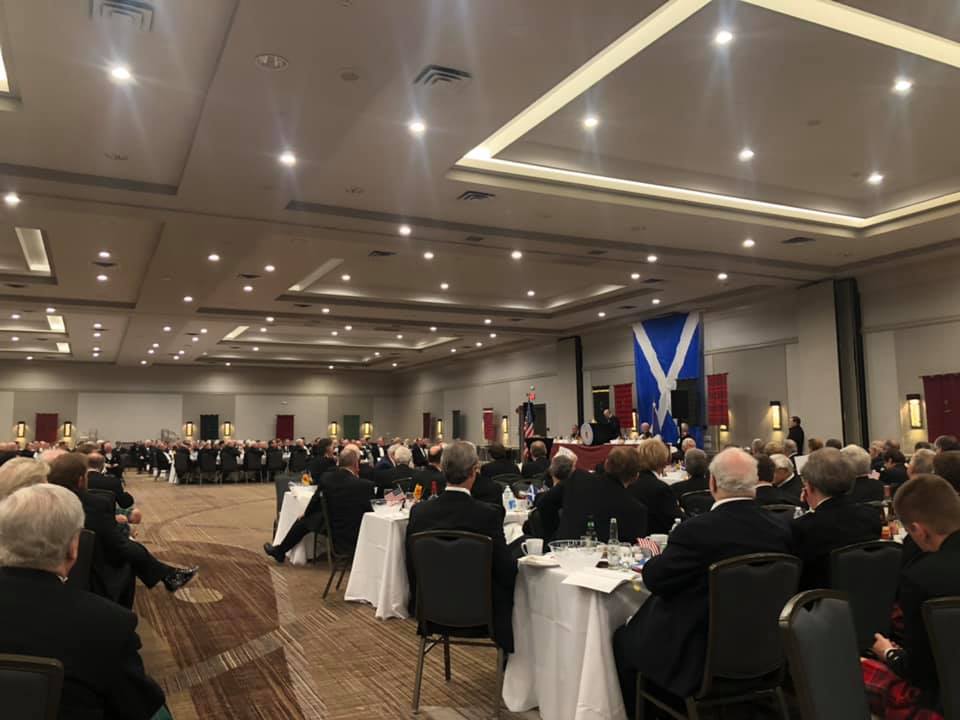 At the podium. Photo by Jason Talsness

The second reason they came and concentrated themselves there is that the merchants in Wilmington marketed the region. If you look at a map of North Carolina, you’d notice that the rivers in the Western Piedmont and eastern mountains all flowed into South Carolina. The Cape Fear is the only river in North Carolina suitable for ocean going traffic. These merchants wanted farms and settlements so they could trade both up river and across the Atlantic.

Highlanders poured into North Carolina, mostly through the port of Wilmington, where they piled their belongings in long boats for the tough paddle upriver. They made their way to Cross Creek. (What kind of name is that? How does one creek cross another? Or is this a creek mad at the world?) But that name didn’t stick, except for in a shopping mall. And that mall probably won’t be there much longer. After the Revolution, the citizens of Cross Creek changed the name of the town to Fayetteville in honor of the Layfette, the French General who aided Washington. But that would be in the future, beyond the story I’m telling.

As these piney woods filled with Scots, they set out clearing land so they could plant corn, turnips and beans. They raised hogs and sheep, and kept a cow or two. They built mills for grinding grain and sawing lumber. They cut heart-pine timber and saved the tall straight logs to be used as masts on ships. They collected pitch from the pines and distilled turpentine. They did some other distilling, too, with something other than pine sap. I’m sure there was a field or two of barley. That which wasn’t drunk, along with the naval stores, were floated down the Cape Fear to Wilmington. There, it was shipped out across the sea. Life was pretty good. But along came a war, a war that brought division to the region just as it had to their homeland in 1745.

Early in 1776, the governor of the colony sounded the call to raise an army of Highlanders. The goal was 3,000 men, enough to help the regular British army nip the revolution in the bud.  They called upon General Donald MacDonald (Donald McDonald, you gotta admit, we Scots aren’t the most creative when it comes to names). MacDonald, a loyalist and experienced British officer, went through the Carolina Pine Barrens recruiting. He was only able to muster an army of 1,600. These recruits weren’t overly excited about war, and desertions started as soon as marching commenced. They gathered at Cross Creek, thinking they were going to join a large British force, only to learn that the Brits were still at sea. So they began to make their way toward Wilmington.

It was a miserable hike. Cold and wet. A small band of Patriots from Wilmington had an annoying habit of blocking their path at key points along the way, forcing them to take long muddy detours. As these Highlanders were not trained, and only about half of them had weapons, MacDonald hoped to avoid battle until he joined with the British regulars and his men were armed.

On the night of February 25th, they were 20 miles from Wilmington. Their path again was blocked by Patriots. Thinking they had superior numbers, they decided to strike. The Patriots were camping with their backs against the creek, at Widow Moore’s Creek Bridge. General MacDonald, being ill, relinquished command to the less experienced Colonel McLeod. Assembling the men in the early morning hours of February 26. Stuffing socks in the bag pipes, for it’s hard to be stealth with pipes blaring, they quietly marched off to surprise the enemy. Arriving at the encampment in front of the bridge, they found it abandoned. But the campfires were still warm. Then they noticed the planking over the bridge had been removed.

Col. Mcleod handpicked a contingent of men to cross the creek and to see where the enemy might be hiding. Dawn was just beginning to break, and a fog concealed the lowlands around the water. They carefully crossed the slippery timbers which had been greased with fat, probably from the Patriot’s evening barbecue.

Coming off the bridge, they silently made their way through the fog and up the road out of the swamp. Maybe a twig snap, for suddenly, someone ahead shouted, “Who goes there?” “A Friend of the King,” was the response, followed by something mumbled in Gaelic. At that point, knowing the enemy was just ahead, they drew sabers and charged up the road yelling “King George and Broadswords.” They were brave, living up to Andrew’s name. But the Patriots had dug in. It was a trap.

The patriots held their fire, hiding behind breastworks as the Scots came out of the fog. They charged as if they were William Wallace reincarnated. When only 15 or 20 yards from the line, the Patriots opened fire. In addition to their muskets, they were armed with two small canons loaded with grapeshot. With the road being flanked on both sides by swamp, the Scots were trapped. McLeod fell first, followed by fifty-some of his handpicked men. The rest of the Highlanders fled. The battle lasted only minutes. Over the next couple of days, 800 or so of the Highlanders were captured. Some were pardoned and went back to their farms, but many fled or were banished to Nova Scotia, Florida or the West Indies.

The defeat meant the British could not control the interior of the South and were severely hampered in their efforts at defeating the colonists. That summer, in Philadelphia, the Continental Congress issued the Declaration of Independence. Many of those who had refused to join General MacDonald, such as my Umpteenth Great Grandfather Hugh McKenzie, joined in the fight for Independence.

Defeat can be bitter, especially for the proud manly sons of St. Andrew. But in time, God’s providential hand can be seen. As in Culloden, which strengthened the United Kingdom as the nation rose to reign supreme in the 19th Century, the defeat at Moore’s Creek was one step toward the creation of our great nation. At the time, these Highlanders had no idea, but theirs was a glorious defeat.  Thank you.

In January 2018, I gave the keynote at the Society’s “Burns’ Night” banquet. Click here to read my talk, which I was more humorous than this one.

McKenzie, James Duncan, Family History: A Comprehensive Record of the McKenzie Family from the Immigration of Hugh McKenzie to America from Scotland about the year 1750 and Continuing through the Present. (Unpublished Manuscript, 1940).