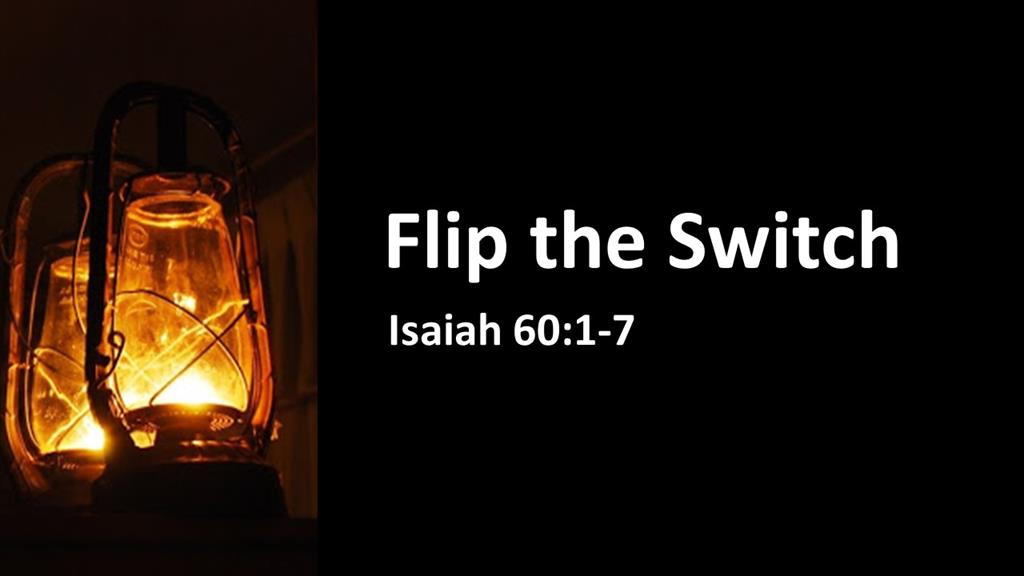 Tomorrow is Epiphany, a word that means a manifestation. Think of it as an “a-ha” moment. It’s the 12th Day of Christmas, but in the Western World, Christmas Day has overtaken his feast day in which we recall the coming of the Magi or the Wisemen. The Wisemen followed the star to Bethlehem. Their coming to the manager is important because it fulfills, as we’ll hear from Isaiah, the light shining in the darkness that draws people from all nations to experience what God has done. Jesus was not born for just Mary and Joseph to cherish. His birth was not just a way to relieve the boredom of a few shepherds. His birth was to offer hope to the entire world. His birth shows that God is not done with us. Let’s listen to Isaiah as I read from the Message version of Scripture. Read Isaiah 60:1-7. 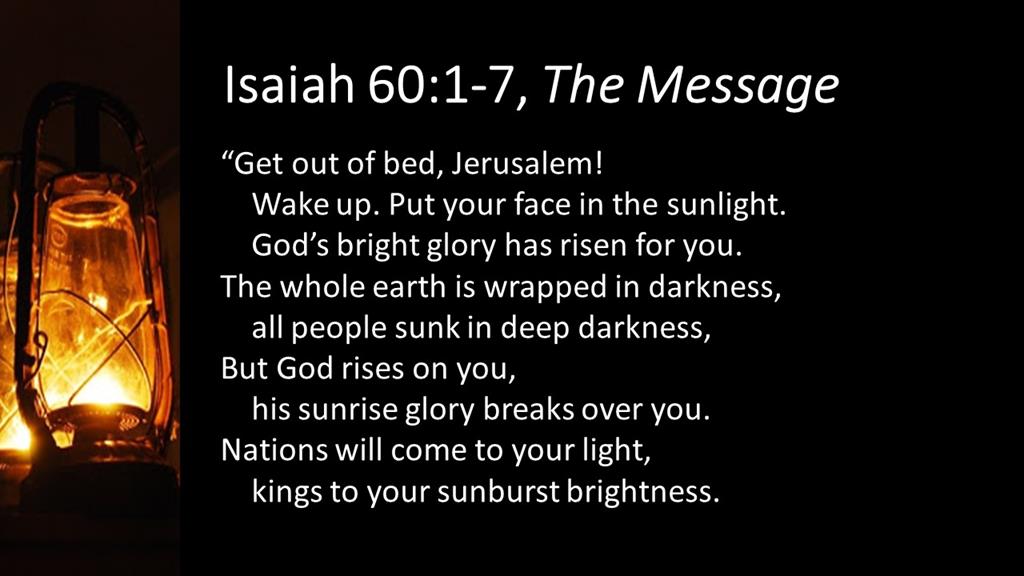 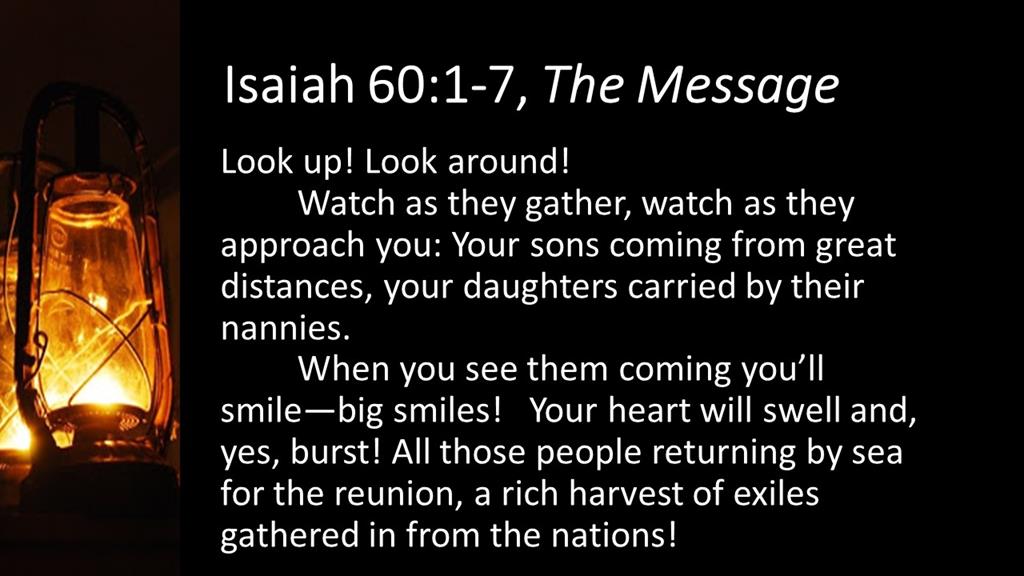 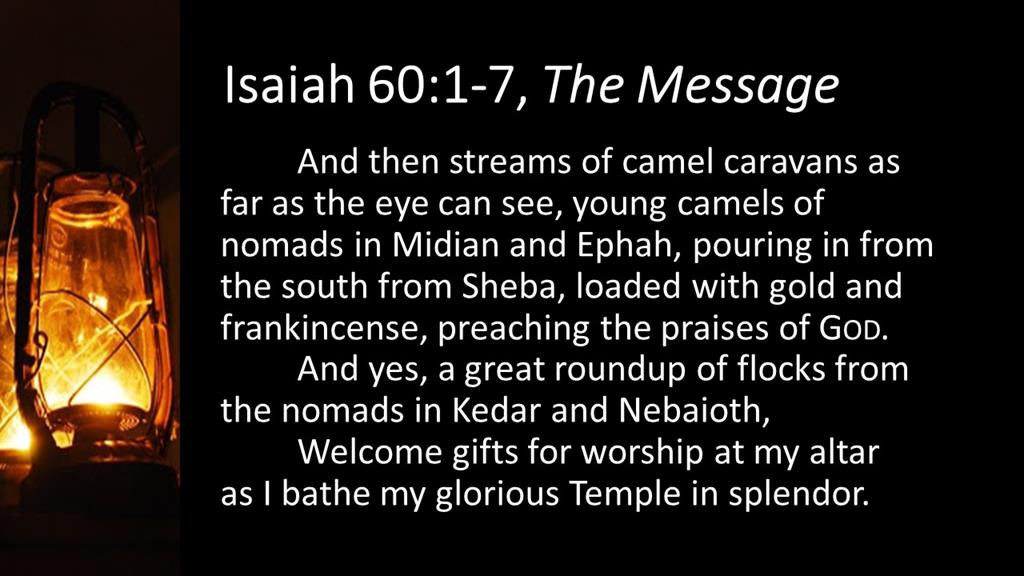 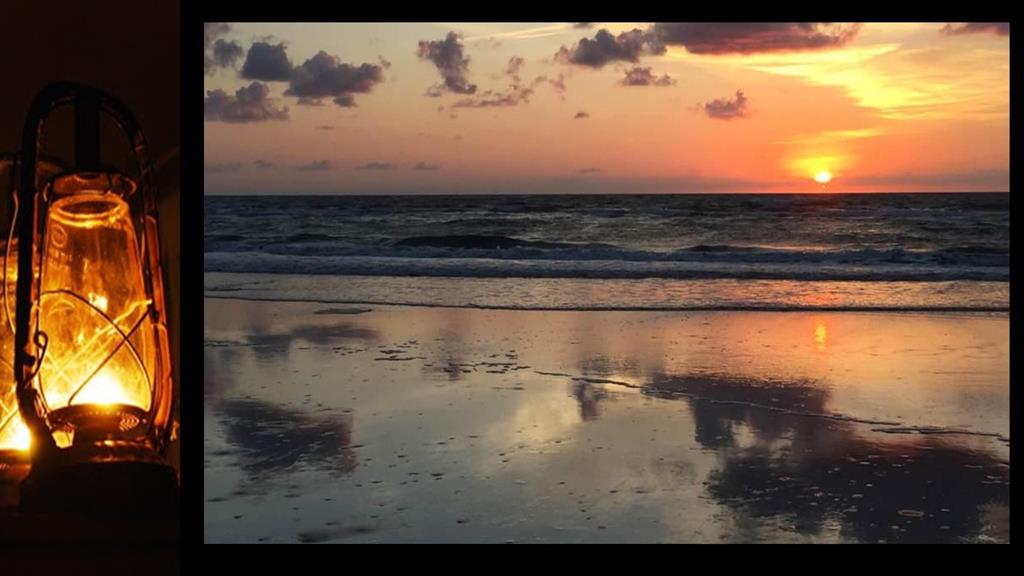 I was blessed as a child to spend many days camping on an undeveloped beach, generally in the fall of the year when the bluefish were running. We’d crawl out of our sleeping bags while it was still dark and start a small fire on the beach to drive away the chill. You could only make out everyone’s shadows created by the light of the fire or lantern. Before the stars began to disappear and the sky lightened, we’d have a line in the water, baited with cut mullet. You’d cast the line out beyond the surf, hoping you were in a good spot. Gradually, the shades of black and gray would be replaced by color as we shivered in the chill and held our rods high, an index finger touching the line waiting for the signature bump of a fish.

When darkness began to fade, birds would take to the air. It was often then, right before the sun rose, that the bluefish would begin feeding. They’d take the bait and we’d feel the bumping of the line. We’d yank the rod to set the hook, and began to haul them in, trying to keep our feet out of the breaking surf. (as a young-one, I didn’t have any waders). Soon, we’d see a fish flapping in the receding waves and not long thereafter, a few of the fish would be roasting over the coals of the morning fire. But as busy as we were catching fish, we’d pause to watch the sun come up as a bright orange ball. It was a few minutes of amazement. Afterwards, as the sun rose even higher, and its orb seem to shrink (it doesn’t, that’s an optical illusion), we’d begin shedding jackets and no longer needing the fire to stay warm. Now that we could see where we were casting, we’d change from cut bait to a lure or spoon, casting out toward the birds which hovered over the feeding fish.

There’s something magical about the sunrise. The new day is filled with possibilities. With the rising of the sun, there’s hope. It’s a time to give thanks for the day God has given us and, on these mornings, for the fish destined for the freezer. 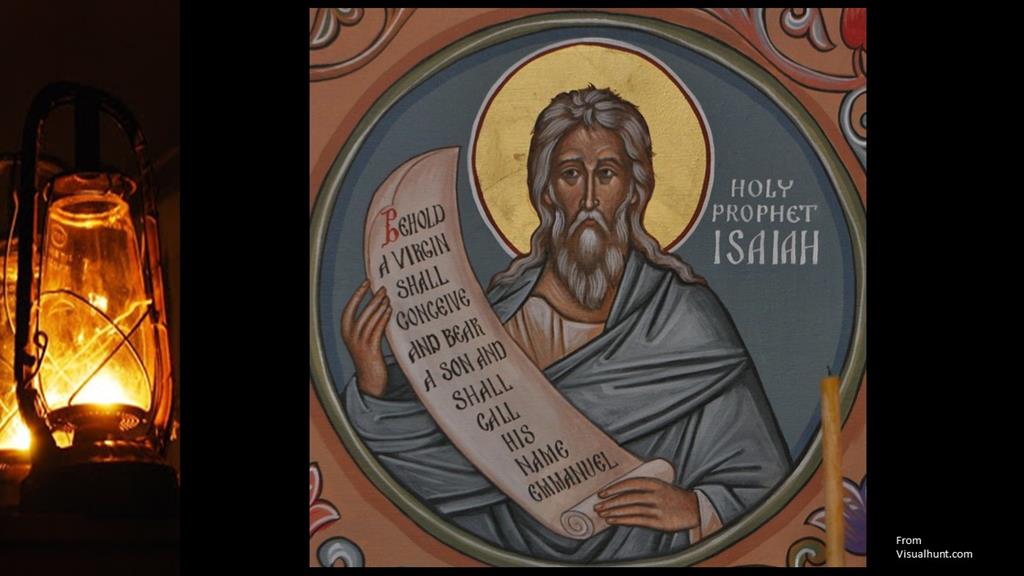 You know, the Prophet Isaiah had a lot of depressing things to say. He wrote about the fall of Israel and the coming exile for Jerusalem. War and destruction is at the forefront of his message, but occasionally Isaiah breaks out of the darkness. In Chapter 9, he writes, “The people who walked in darkness have seen a great light,”[1] a text read often during the Advent and Christmas seasons. In Chapter 42, Isaiah recalls Lord’s promises by reminding the Hebrew people that God is turning darkness into light.[2] And as his book moves toward its conclusion, he again brings up the coming of light. “It’s time to rise and shine.”

This passage reminds me of that old camp song, “Rise and shine and give God the glory, glory.” Isaiah is reminding his readers that it’s time for God’s people to be “the light to the nations.”[3] Isaiah’s viewpoint is that the world is in darkness, but God is bringing about a change and it will be up to God’s people to help light shine in the world. As God’s people, it’s as if we’re given flashlights. We’re not to hoard our light, but to share it share with others as we draw them to the beach to watch the greatest son-rise of all (that’s son with an “O”), the coming of God in the flesh. 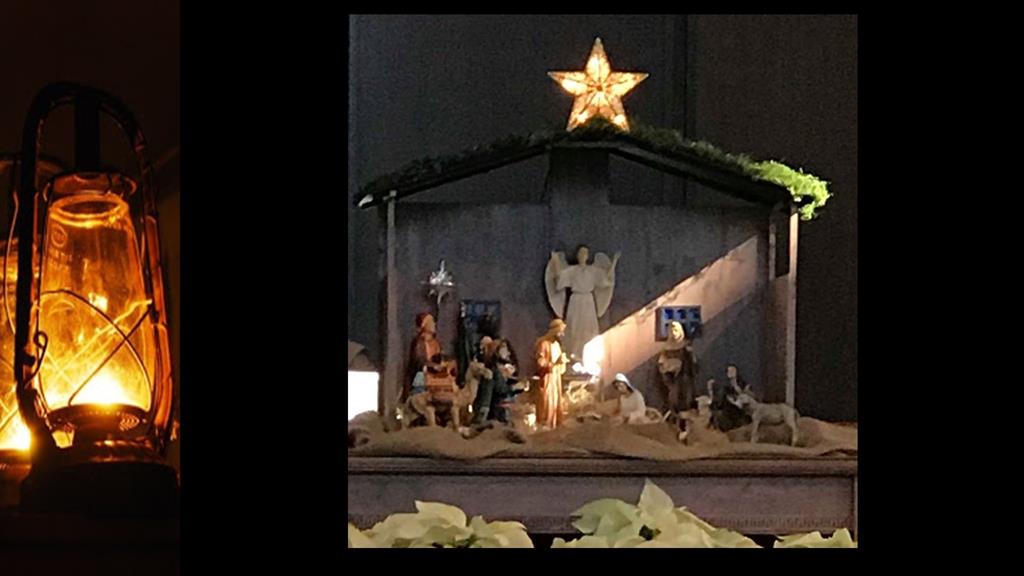 As Christians, we read these passages through the lens of Jesus, the light coming into the world as proclaimed in John’s gospel.[4] Furthermore, in the Sermon on the Mount, Jesus calls us to be a light to the world.”[5] Think of it this way. Jesus is the light of the world, but he calls us to also be lights of the world. Maybe we’re not as bright as his light, maybe we’re more like the moon than the sun, reflecting the light of the true light. But that’s okay. Remember it doesn’t take much light to offer hope. It was mere star that drew the wise men from the East. On a dark night, a few small red and green navigation lights show us the channel. It doesn’t take much to provide hope and guidance, and if we’ve seen the light, we can also be that light, that hope, for someone else. 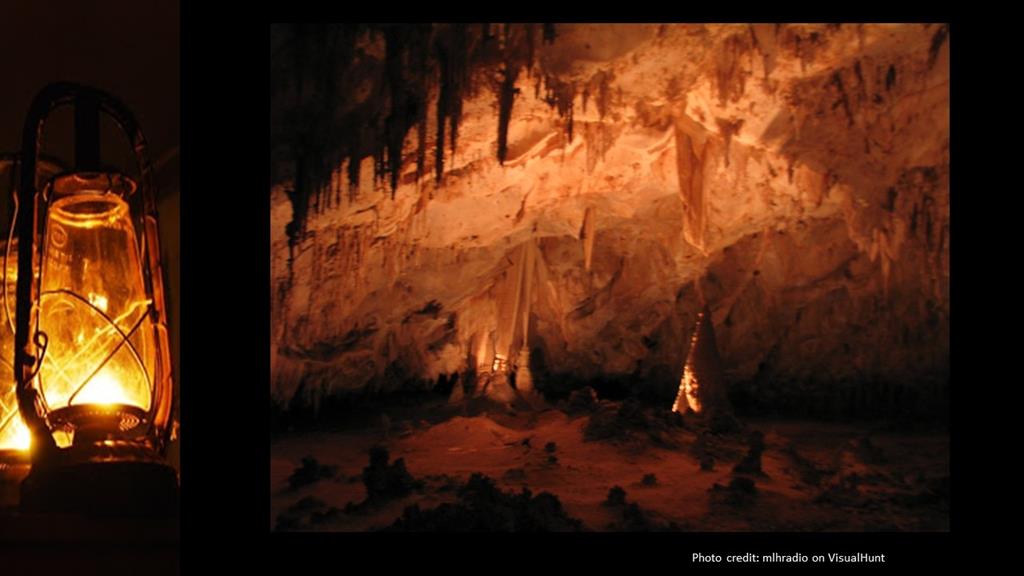 Years ago I had the opportunity to spend a few days spelunking (or caving) in eastern West Virginia. It was an incredible experience. When you are below ground like that, there is no light at all. Turn off your light and you can’t even see your hand in front of your face. At one point, we gathered in a huge underground room. Our guide had us place our cameras on tripods and to open the shutters, then had us go around the room popping flashes. Each splash of light would illuminate a section of the wall and ceiling, which we didn’t see until after the film was processed (these were the old days, long before digital). By bringing light into this cave, we got to experience on film the incredible beauty of this huge underground chamber that was dotted with crystals. 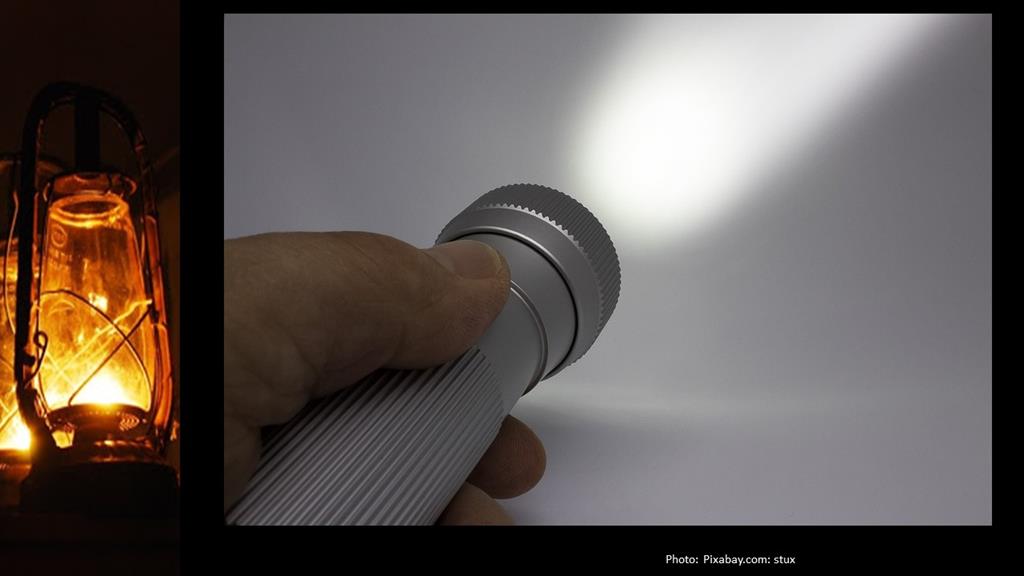 This is what we as Christians are to be doing, bringing light into the world. Yes, there are problems. There are evil people who do terrible things, like the Iranian general who was just killed. There are hateful people who want to wipe others off the face of the earth. There are dishonest people who will lie and cheat to get ahead. There are misguided people who create chaos and whom try to profit at the expense of others. We live with partisan hatred in our own country and under the threat of terrorist attacks, both domestic and foreign. The possibility of war is always on the horizon. But despite all that, as believers in the one who came into a troubled world as a child, the one who was willing to die for our sin, the one for whom the grave could not hold, we have hope. There is much that’s good and beautiful in the world which, like that wall inside a cave, only needs a little light to shine upon it. That’s our job, to point people to all that’s good in the world and to what God is doing through his son, Jesus Christ. 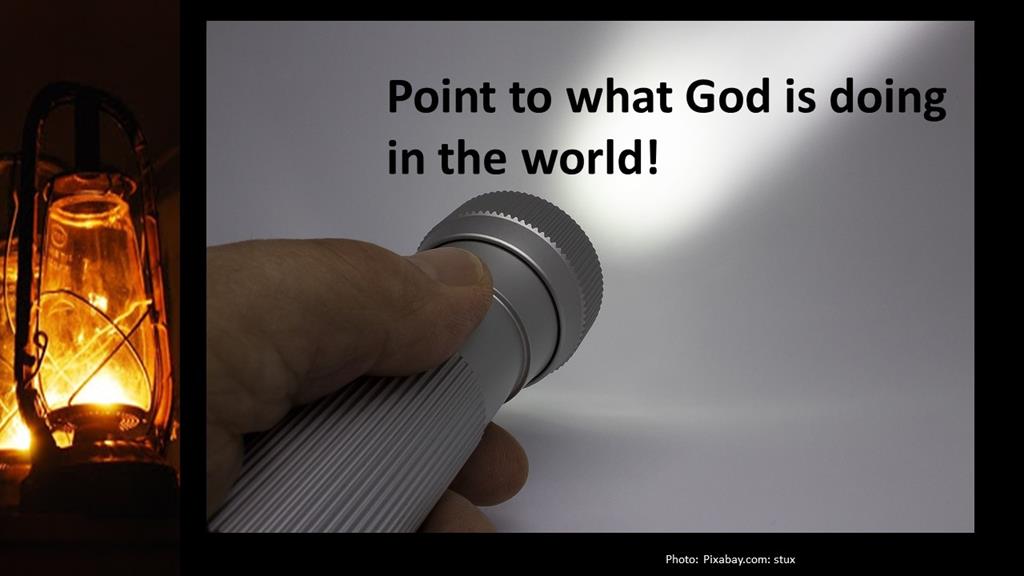 As we enter a New Year, flip the switch and be the light of the world. Hold tight to the faith we have and share the hope that in Jesus Christ, God has things under control. The good news is that we’re not alone as this New Year begins. Remember the truth of the Psalmist, “Weeping may linger for the night, but joy comes with the morning.[6] Amen.