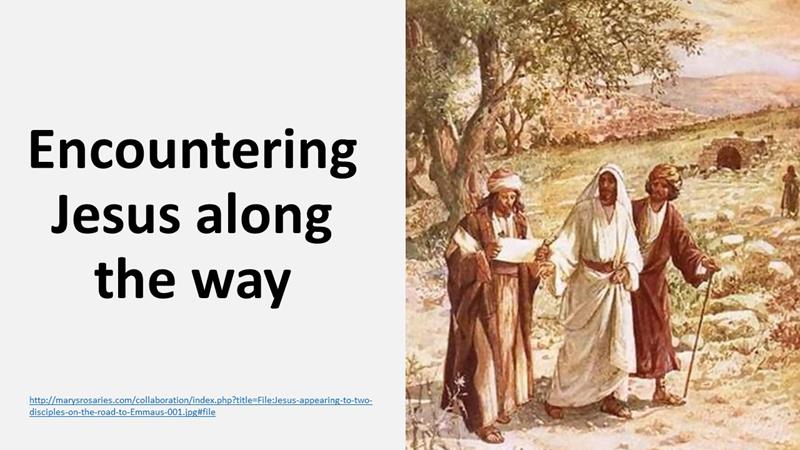 It is solved by walking, Augustine of Hippo said.[1] I believe it. When I don’t know what to do, I often take a walk (or ride a bicycle or spend time in a kayak). There’s something about getting out and moving that helps us re-center ourselves. It’s especially true during these times of social isolation. We need to get some fresh air and pick up a little sunshine. It helps our mental state. And maybe that’s why the two disciples in today’s scripture reading decided to hike over to Emmaus. After all, they’d had a bad week. We’ve all had some bad weeks lately and could all probably use a good walk. The weather is going to be nice today—just maintain a safe social distance.

As we’ve done through Lent and have continued through the Easter season, I’m going to use a piece of art to help us get into the text for today. Our picture shows two disciples flanking Jesus as they walk along the road. Now, as we’ll see when we get into the text, they don’t recognize Jesus. We do! He’s in the middle (remember my sermon from last week-Jesus is always in the middle and we need to keep him there.). Also, Jesus is wearing white! That’s a dead giveaway! One of the disciples holds a scroll and Jesus is obviously helping him understand what he’s reading. But let’s step away and get into the mind of what this lad, over on the edge, might be thinking. 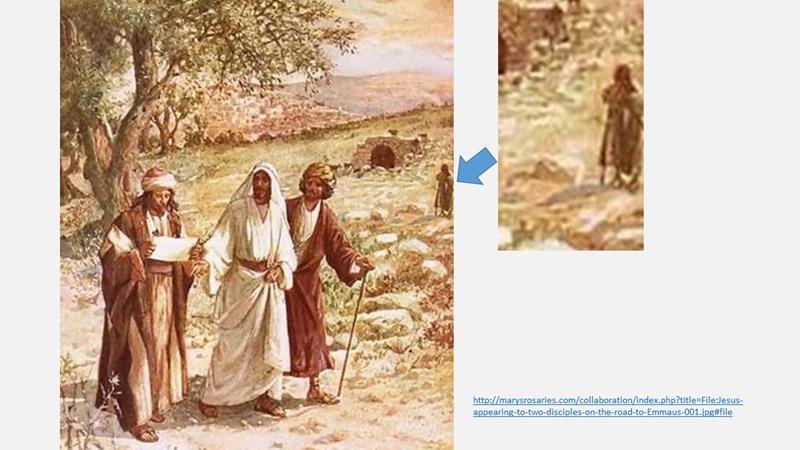 I have a lot of time to think out here, watching the sheep. I see a lot of people coming and going. Jerusalem, the Holy City, is just over the rise, a few miles away. These three were heading away from the city and engaged in a great debate. Even with my back turned, I could hear them a mile away. And as they were talking, the third guy, the one in a white robe, catches up with them. He joins their conversation. They seem rather surprised that he didn’t know what they were talking about. There’s this man, supposedly a king, who’d been crucified. But then he starts asking questions and I can tell they are intrigued. Here, a guy who didn’t seem to know the news, yet knows the scriptures.

Later in the day, as the sun is setting, I see the two men again, rushing back toward Jerusalem. They are joyous and excited. I wondered what happened to the third man, the one who seemed to know so much. 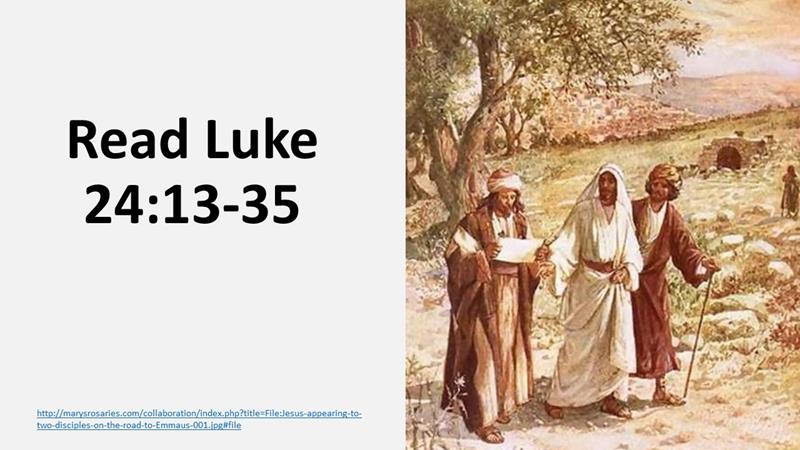 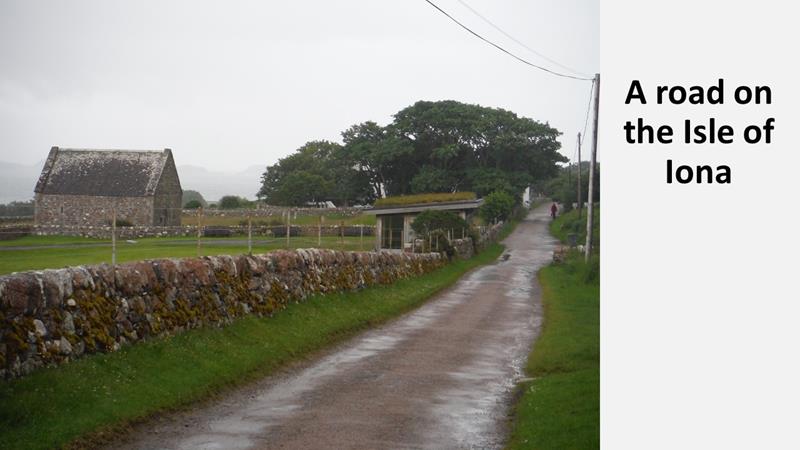 It’s still Easter in our text, the afternoon after word began to spread around about Jesus not being in the tomb. People are trying to figure this all out. One of the things that I like about Luke’s retelling of the resurrection is how he gives three different stories which all happened that first Easter Sunday. There is the account of the women and Peter at the empty tomb early in the morning. Then there is this account that happens along to the road to Emmaus. Finally, there is the appearance of Jesus among the disciples at a fish fry. In today’s account, we learn that what happened was necessary and foretold by prophets. The Messiah had to suffer, die and rise again.[2]

In the account we’re looking at today, we join up with two disciples walking to Emmaus, a town which according to Luke was about seven miles from Jerusalem. We’re not sure, today, where Emmaus was located. One of the disciples is identified as Cleopas, and we don’t really know who he is as this is his only mention in Scripture. It’s assumed these two disciples were not part of Jesus’ inner-circle (the twelve) but of a larger group of those who followed Jesus.[3] Some think the unnamed disciple might have been Cleopas’ wife. Perhaps they were two of the 70 disciples Luke mentions in the tenth chapter, who were sent out by Jesus. 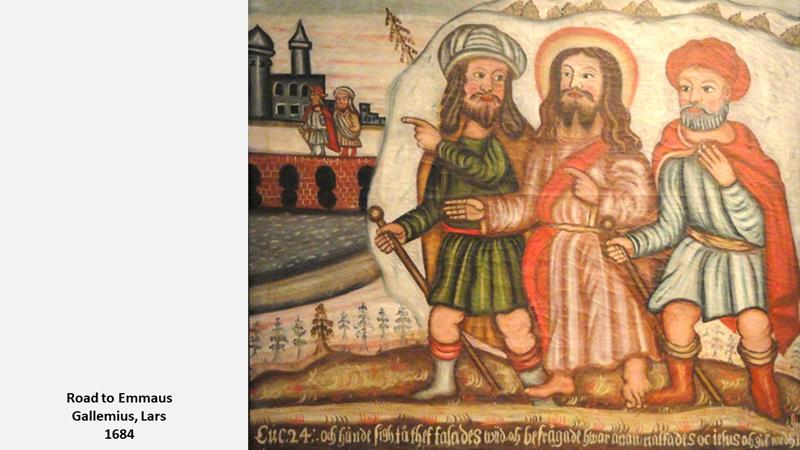 On this occasion, they are walking and discussing the events of the past few days when they are joined by a stranger. This makes sense to me, as I have walked a lot in my life. I recall numerous occasions along the Appalachian Trail where I was talking to someone and a third person comes up behind us and, overhearing what we were talking about, puts his two cents worth.

Interestingly, they do not recognize Jesus. Certainly, if they had traditional robes and head coverings, it could be hard to recognize him, but we’d think they would be familiar with his voice. But Verse 16 indicates that their eyes were prevented from seeing Jesus, which parallels what happens in the guest house, where their eyes were opened.[4]

When the stranger joins them, he asks, essentially, “What’s going on?” Think about this. It’s been a troubling few days in Jerusalem. This is kind of like someone coming up to you in the grocery store, way too close, while you’re decked out with gloves and a mask, and ask what’s up with the gloves and masks. Does this person not know what’s going on with the COVID virus?[5]  Cleopas, the only disciple named, questions him harshly. “Are you the only one that doesn’t know what’s happened? It seems odd that this stranger is clueless, and they fill Jesus in on all that has happened. They witness to Jesus, about Jesus! But it turns out, Jesus’ isn’t so clueless. He helps them understand the Scriptures by asking a question. It has been said that questions “help tune the soul,” as they help “illumine the world.”[6] Jesus’ question, on the need for the Messiah to suffer before glory, does this. Jesus, whom they still don’t know, helps these disciples see the Scriptures in a new way.

There’s a part of me that feels as if Jesus is playing with the two disciples. Yes, he knew very well what happened in Jerusalem over the past few days. But Jesus, instead of pulling down hood of his robe and demanding the disciples look him in the eye, or maybe showing them his hands and feet, takes the time to lead these disciples to the point in which they can accept and understand what happens. Jesus is never in a hurry; he takes his time, helping us to understand God’s grace.

The disciples, who still haven’t figured out who Jesus is, appreciate his words and invite him to eat with them in Emmaus. We have the sense Jesus was willing to just keep on walking, but hospitality is appreciated, and Jesus’ accepts. This sets up an occasion for him to break bread with the two disciples and it is in that act that their eyes are opened, and they recognize him. 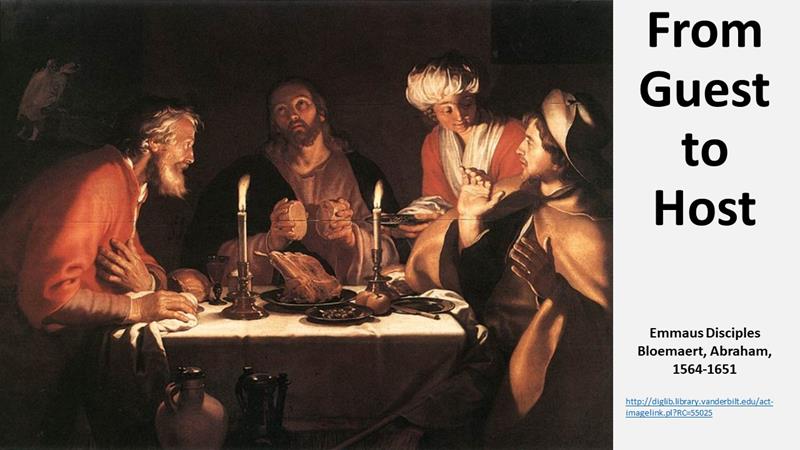 Something else happens. Jesus, at the table, goes from being the guest to the host.[7] The disciples are rewarded for their hospitality, perhaps foreshadowing what would later be written in the Book of Hebrews, “Don’t forget to show hospitality to strangers, for some who have done this have entertained angels without realizing it.”[8] In this case, it’s not just an angel. It’s the Lord himself. 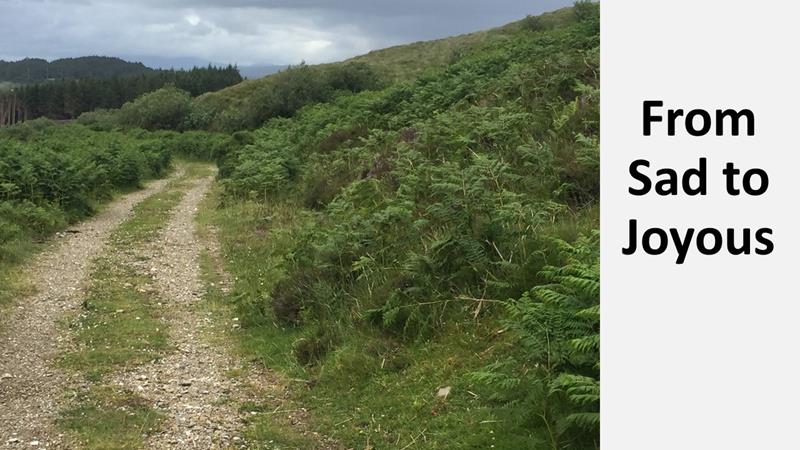 As they walked to Emmaus, I imagine the two disciples lollygagging along. Their heads are down, they’re kicking stones. They’re sad about Jesus and not sure what to think of the rumors they’ve heard. Their slow pace allows this stranger to catch up with them and join in their conversation.  Afterwards, after Jesus opens their eyes, they run back to Jerusalem. Their pace picks up. They have a purpose. They head back to find the disciples and to share the story of their encounter.

Jesus gives us a purpose. In the other resurrection stories, Jesus sent off those he met with a mission. Mary Magdalene is to go tell the disciples. The disciples are to build a church on forgiveness. But here, Jesus just disappears. However, the two disciples know what to do. This is just too glorious to keep to themselves. They must share the message with others, so they head back to Jerusalem to tell the disciples. 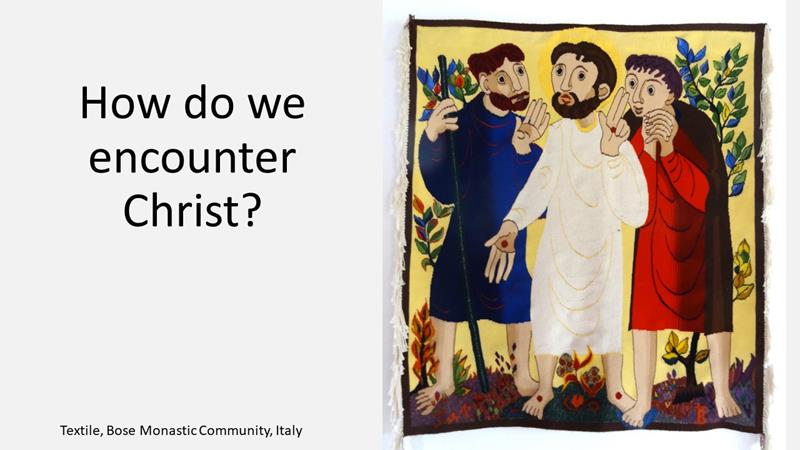 In some ways, our encounters with Christ are probably more like these two disciples walking to Emmaus. There are very few Damascus Road experiences, like that of Paul. It ranks up there with Moses’ burning unburned bush. Most of us experience Christ, like these two, when we realize something someone said caused our hearts to burn, or when someone opens Scripture and we learned the eternal truths of God’s Word. And when something like that happens, we must tell someone. It’s a Truth we can’t keep to ourselves. This is how our faith spreads. We encounter Christ through his word or through someone who speaks to us about Christ and then Christ becomes real to us. 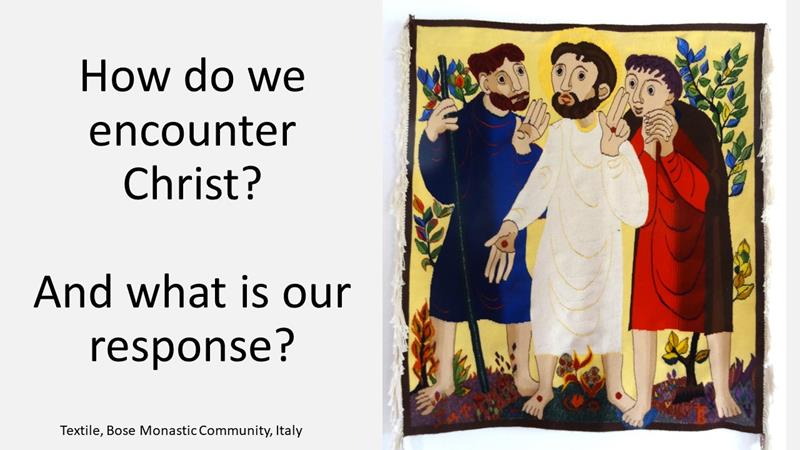 When Christ became real to these two disciples, they rushed off to tell others. What do we do? How do we respond? How does our faith change our lives? In this time of social distancing we might not be able to barge into a neighbor’s house sharing the good news, but there are still ways we can let people know what we’ve found to be true. There are ways we can let people witness our faith, for we have a story that demands to be told. Amen.

[1] Solviture ambulando. It’s one of my Augustine’s more well-known sayings that has been often quoted.

[5] This story came from Jill Duffield, “Looking into the Lectionary-3rd Sunday of Easter,” The Presbyterian Outlook (April 20, 2020).