An edited copy of this article appeared in The Skinnie’s November 27th issue. 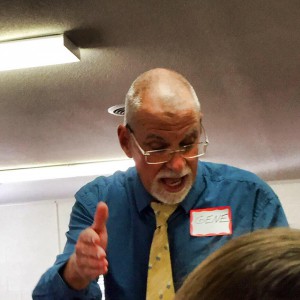 It is a joy to be in the presence of Sacred Harp singing.  The voices blend together as the music rises and fills the room.  The leader of a song stands in the middle of the singers, a songbook in his left hand as his right hand rocks back and forth to the beat of the music.  There are no instruments.  They are not needed; the sacred harp is the human voice.  Before singing the verses, they sing the notes and the blending of sounds seem foreign, as if they are singing a multitude of languages.  One unsure of what’s happening might think they stumbled upon worshippers speaking in tongues.  But then, after having learned the melody, they begin with the first verse such as this one, Canaan’s Land, one of the favorites of those who sing from this tradition:

O for a breeze of heav’nly love to waft my soul away. Listening, one feels the pull of heaven.

Sacred Harp music is not a performance. The singers are not a choir.  Instead, they come together in community to enjoy the musical experience as their voices mix together and rise to heaven.  Perhaps they are performing; not for those in the room but for God, in the essence of true worship.  As Gene Pinion, one of the leaders of the Savannah Sacred Harp group expresses, “our singing combines the beauty of poetry with the raw emotion of the human voice.  Freed from the conventions of ‘art’ we singers enjoy unrestrained musical communion with one another and the Divine.”

There are four sections of voices that all face inward in a closed square: women singing altos and men bass, with a combination of the sexes populating the tenor and treble sections.  Those observing from outside the square may not experience the joy of the singers, but are amazed at the power of their voices and can’t help but to be blessed by the simple beauty of combined voices.  Most of this music is sung away from human eyes, but in the movie, “Cold Mountain,” one can observe such singing following the announcement that secession had been declared and war was inevitable.

On Saturday, December 5, at 2 PM, the Savannah Sacred Harp Singers are holding a “Lessons and Carols Service” at the Skidaway Island Presbyterian Church.  This is an opportunity to witness such music as we prepare for the upcoming Christmas season.  For those interested, you can come an hour earlier and the group will make room for you in the square and help you learn and enjoy the music.

Sacred Harp singing grew out of the distinctly American tradition of shape-note music.  This style of music developed in New England in the late 18th Century, but moved south in the early 19th Century, where it found a home in the rural setting.  In the 19th and early 20th Century, music teachers would travel the South, gathering students to teach them this unique and simple method of singing.   In addition to these teachers, a publishing industry grew up around the music.  In 1844, Benjamin Franklin White and E. J. King, two Georgians, published The Sacred Harp: The Best Collection of Sacred Songs, Hymns, Odes, and Anthems Ever Offered the Singing Public for General Use.  Most singers are more modest than the title suggests, but the text remains as a standard within the tradition.

In time, the popularity of shape-note music declined as modern music theory was introduced.  This was especially true in urban areas, where more affluent churches could afford organs and choir directors, who joked about their “square-headed” country cousins.  But the music never really died out.  Although it was never linked to a particular denomination, some groups like the Primitive Baptist and the Church of Christ (who sings a cappella and shuns musical instruments) continued to draw upon this tradition.  The music was accessible and, for many rural churches which might have a preacher only once or twice a month, the vacant churches became places where people would gather to sing on the Sundays they were without a preacher.

There are some secular songs within the Sacred Harp tradition, but most of the music is religious and the singing is often held at churches.  John Etheridge, a life-long lover of Sacred Harp music and former president of the B. F. White Sacred Harp Book Company suggested that while such singing is not religion, “it is a religious experience.”  Joe Dempsey, a Washington D. C. journalist who explored the tradition in the South, was so astonished by the music that he suggested if you could “get enough people singing weird harmonies at the top of their voices, you can start feeling a little sorry for the devil.”

With fewer churches holding to the Shape Note/Sacred Harp tradition in the American South, groups of singers began to gather on a regular basis to sing for the joy of the music and to keep the tradition alive.  On Saturday and Sunday, all over the South but especially in Georgia and Alabama, singers drive for hours to gather with groups such as the one that meets at Skidaway Island Presbyterian Church, just to have the opportunity to participate.   A recent convert to this musical style is Pastor Jason Talsness, of Messiah Lutheran Church on Skidaway Island, who appreciates these “uniquely American tunes and harmonies that articulate the Christian faith as well as the human condition.”

Like music written with modern techniques, shape note melodies are written on the traditional five-line staves, but each note has a shape that represents the tone (fa, sol, la, mi).  Often, this type of singing is called fasola, referring to the tones used in the music.  The tradition is mostly handed down, as one generation passes it along to another.  Although the traveling singing schools died out a century ago, there is still a week-long singing school held in conjunction with the National Sacred Harp Singing Convention that is held annually in Birmingham, Alabama.

The groups who gather to sing Sacred Harp music are highly democratic, selecting their own leaders and allowing everyone a chance to participate in leading the singing.  Many singers descend from a Scots-Irish lineage who settled much of the South.  They are independent and wary of outside control, whether ecclesiastical or political.  This independent and stubborn streak has probably kept the music around for so long, as they hold on to the past in a world that is always changing.  Others may consider them a little odd, as church musicians at city churches did once they installed a piano, harmonium, or an organ.  But those devoted to the music enjoy one another’s company.  Many of the singing events include dinner on the grounds or other fellowship opportunities that keep the community strong and close-knit.  But they are always willing to open up the square and make room for more singers.   The Savannah Sacred Harp Group invites those interested in exploring and enjoying this unique tradition to join them.