Christ has come and Christ will come again.  This truth of the Christian faith is why on our Advent journey in which we remember the future (Christ’s coming), we find we must deal with that crazy man out in the wilderness, John the Baptist.  We’re going to spend two weeks with John, today and next Sunday.  John kind of reminds me John Brown, the fiery abolitionist, for neither of the two minced words.  John called it as they saw it, yet people were drawn to him.  It’s an interesting phenomenon that we still see—one who makes outrageous demands yet is still able to draw a crowd.  What’s that all about?  Perhaps it has to do with us knowing that, deep down, that is something rotten in us and we need to change.  John tells us to be ready, for one is coming who can help us make such changes.

Our reading today begins, through, not in the land by the Jordan in which John ministered, but in the halls of power as Luke tells us who was in charge in Rome and the various providences around Palestine and at the temple.  The halls of power stand in contrast to the voice crying in the wilderness.  Read Luke 3:1-6. 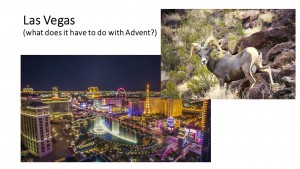 Many of you, I’m sure have been to Las Vegas.  It’s a city that never sleeps.  If you are up at 4 AM, which you might be if you have just arrived due to the 3 hour time change, you can find the casinos still bright with the bells of slot machines ringing.  Deserts are usually dry, dark and sparsely populated places.  But Las Vegas is a city that defies the desert.  You’ll find magnificent fountains splashing water.  When I lived in Southern Utah and would drive to Las Vegas at night, it was always a sight to see as you traveled through the darkness with bright stars overhead, only to crest a ridge about twenty miles outside of Vegas and there before you was a valley lighted up Christmas regardless of the season.  And the crowds…

In contrast, deserts are quiet places, with the only sound being the wind blowing through a barren canyon or rattling dry yucca pods.  In Vegas the sound of a carnival fills the air, especially downtown and along the strip.  If you get out of Vegas, just twenty or so miles, you’re in a different world.  One of my favorite places to hike, on the times I was there in the winter, were the canyons that dissect the Black Canyon of the Colorado River basin south of Hoover Dam.  These waterways were mostly dry (and because of danger of flash floods you’d better stay out of them when rain is forecasted).  Deep inside one, you’d be more likely to come upon a desert bighorn sheep or a rattlesnake than another person (some of you can give thanks that I have taken photos of desert bighorns and not of snakes while hiking there).  For those like me, who sometimes need a break for the commotion of a place like Vegas, these canyons provide opportunities for solitude.  It’s hard to believe, when you are in such an isolated place that hundreds of thousands of folks are rushing around life just a dozen miles or so away, by the way the crow flies.

Luke, in our reading today, provides us with a similar contrast, as he shifts our focus from the busy places of politics to the wilderness.  This gospel writer is a stickler the details, providing us a historical settings, a who’s who of both the political and religious world. 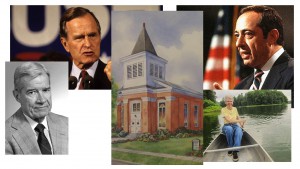 If I was to write the history of my ministry, using Luke’s model, I might tell the story of my ordination in Ellicottville New York in this manner:  George H. W. Bush was in the White House, Mario Cuomo was the governor of New York, Price H. Gwynn III was the moderator of the Presbyterian General Assembly and the Reverend Eunice Poethig was executive presbyter of the Presbytery of Western New York.

By beginning with all the bigwigs of Rome and Jerusalem, which Luke inserts here as he also does in chapter two with the birth of Jesus,[1] we’re surprised to learn that God’s word doesn’t come to the city or to those in power.  Instead, it comes through a strange fire-breathing prophet living out in the Jordan River wilderness.  And his message is one of expectation, as he draws upon the ancient prophet Isaiah, emphasizing God’s on-going work of salvation.[2]  I like how Eugene Peterson translates John’s preaching in The Message:

Thunder in the desert!

Make the road smooth and straight!

Every ditch will be filled in,

every bump smoothed out

the detours straightened out

all the ruts paved over.

Everyone will be there to see

The parade of God’s salvation

There are some that think this passage draws from an ancient practice of clearing a path for a royal procession.  If a king traveled through his territories, there would be those who went ahead to smooth out the road so that the king could travel comfortably and speedily.[3]

It’s interesting to contemplate this passage in light of the never ending political season we’re in.  A friend, commenting on how Luke throws in the politics of the era into our text, wrote: “In the rarified circles of society where the Caesars dwell, folks don’t like to admit they have problems.  Politics is about solving other people’s problems, not about admitting to your own.”  To such people, who “live on the mountaintop, such a call to repent is frightening,” for they are to be made low.  But to those “living in the low lying margins of life, this great equalization, the mountains lowered as the valleys rise, is good news.”[4]   In a way, this appears to be just another example of that hard-to-comprehend truth found throughout Jesus’ teachings that the last will be first.  We must always remember that God’s ways are not our ways!  God loves the world and is looking out for everyone, especially those who are often overlooked

John’s message is that God, through Jesus Christ, is coming and people better get ready!  To the Jewish listener of John in the first century, the thought of encountering God face-to-face was terrifying.  They knew their own sinfulness, and that when compared to God’s holiness, it would lead to their demise.  So it was imperative that people prepare themselves by confessing their sins, just as we do early in every worship service.  Confession and repentance is necessary if we want to be able to stand before God without fear.

We all get that Advent is a season of preparation.  Many of us have begun decorating our homes with trees and lights.  The smells of sweets baking and cider mulling fill our homes.  Our homes seem warmer and brighter this season even as the weather is cooler and the nights longer.  Getting ready for Christmas, in this way, runs counter to the season.  We prepare with optimism, reminding ourselves of a change that’s coming, longer and warmer days.  But our preparations, the ones that are really needed, have nothing to do with us creating a home that could be featured in Southern Living.  We need to prepare our souls…

The preparation for Christ’s coming, whether it was his first coming, his second coming at the end of history, or just preparing to celebrate Christmas, must involve self-examinations.  Are our paths straight?  Are their bumps on the roads of our lives?  Are their mountains that we face or valleys we must cross?  What John wants us to do is to examine ourselves so that we might see what is keeping us from being in full-communion with God.   John’s role, by being out in the wilderness, is to drawn our attention away from the busyness of life and to refocus us on what is important.[5]  What crooked ways do we need to straighten, what obstacles do we need to have removed?

Now obviously, by ourselves, we can’t move mountains, but God can and if there is something like a metaphorical mountain that is blocking us from God, we need to confess and call out for help, trusting that God will hear our cries and respond with compassion.

This Advent season, take some time to go into the wilderness, at least metaphorically, and explore the rough places in your lives and see what might need to be done to make room for the coming of God, the coming of a Savior.  Are there dark places in your heart which needs to be brought to light and confessed to God in repentance?  Are their obstacles that keep you from accepting the gentle loving ways of Christ that need to be removed so that you can be filled with joy?

Before falling asleep at night, take time to examine your life using Jesus as an example and confess those sins that you realize, and in the spirit of the season, go out and apologize to those whom you may have harmed or offended.  And finally, repent too of those sins you may not uncover and need God’s help in weeding out from your heart.  Prepare, for not only has Christ come, he is coming again.  Are we ready to meet him?  Amen.

[2] Fred B. Craddock, Luke: Interpretation, A Bible-Commentary for Teaching and Preaching (Louisville: JKP, 1990), 47.