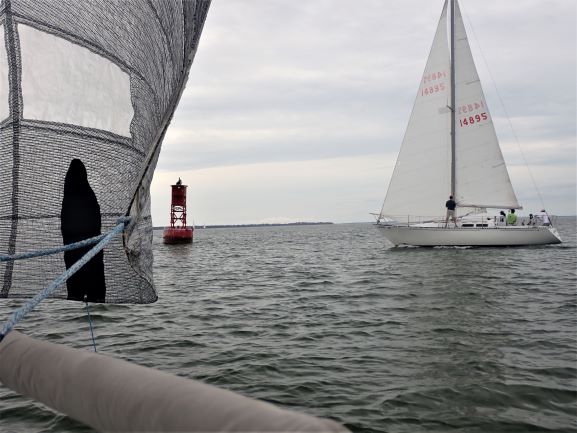 Grand Cru approaching the mark just ahead of us

The finish was exciting. An offshore breeze was blowing steadily toward the land and many of the boats still in the race were all convening on the R2W buoy two miles off Wassaw Island at the same time. There was only one boat left in our class, Todd’s Grand Cru.  While we had opted to stay further offshore in the hope of finding wind, Todd and crew hugged the shore. So, the end of the race had us approaching the mark on a reach, while Todd, who had to tack back toward the mark, was close-hauled, a sail position that gave him more speed. However, he also had more distance to cover. We’d thought we were easily going to make the mark first, but as we both moved closer to the mark, we could tell that Todd was really moving. We checked the sail trim and did everything possible to increase speed, but they beat us, rounding the mark a couple boat lengths ahead. But it didn’t matter. We still won when they factored in the boat’s handicap. Grand Cru is a 33-foot boat and has a much higher handicap than our 24 foot boat. He’d have to finished 20 minutes before us to have won the race.

We crossed the mark at 6:02 PM. It had been a long day and we still had seven miles to go to reach the marina. That was where the final mark was supposed to be but since there had been so little wind and race rules stated that everyone had to finish by 7 PM, which would have meant that no one would have finished, the shortened the race late in the afternoon. The race committee had even headed end, leaving each boat with the instructions to cross the buoy to starboard, turn north and when you pass the buoy, to call in the time. Most of the spinnaker boats (we sailed in the non-spinnaker class) still in the race finished around the same time.  None of the cruising class boats finished the race, all having opted to abort earlier in the afternoon. 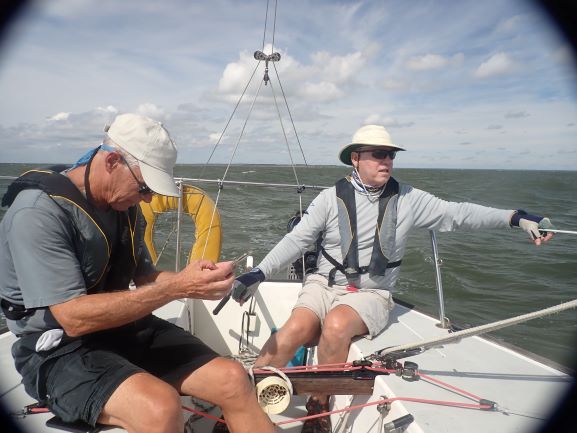 Our race weekend started on Friday, when Doug P., Steve and I took our boat, Bonnie Blue, out to sea and up to Hilton Head’s Harbour Town. We left Landings Harbor Marina at 9:45 AM. The forecast called for light wind and we were thinking we might have to motor most of the way up, but as we got the boat out of the marina, the winds picked up and we were able to sail on a reach (wind coming off the beam or 90 degrees to the boat’s direction), without ever changing tack, all the way out of the Wilmington River and Wassaw Sound. Once we were in the ocean, the winds continue from behind, allowing us to run wing-to-wing (the mainsail and the jib on opposite sides of the boat to catch the wind from behind) all the way north, pass Little Tybee and Tybee Island while sailing down waves that were moving favorably in our direction. Once we crossed the shipping channel to the Savannah Ports, we turned inland toward Daufuskie Island (the setting for Pat Conroy’s memoir, The Water is Wide), sailing across Calibouge Sound until we picked up the channel markers that led us behind Hilton Head Island. The wind died about the time we made it behind Hilton Head and, for the first time since motoring out of the harbor, we engaged the motor and found our slip at the Harbour Town marina.  On Hilton Head, the fourth member of our team, Doug B, who’d been spending a few days with his family on Hilton Head, met us and drove us back to Skidaway. 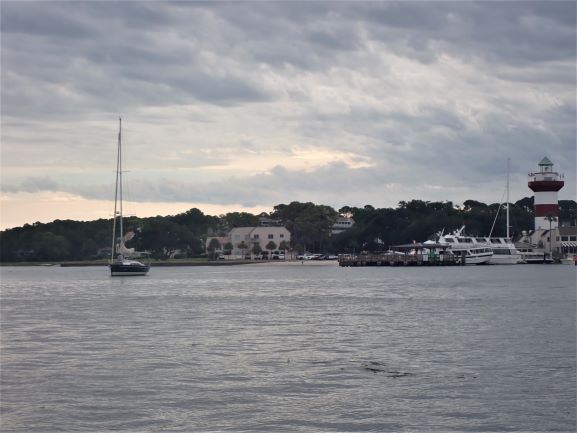 Saturday morning began early as we all gathered before daybreak to drive back up to Hilton Head. The sun was rising as we crossed over the Savannah River bridge. By 8:30 AM, we had the boat ready and motored out to the start line between Daufaskie and Hilton Head. The first class, the cruisers, were to begin at 10 AM.  By then, all boats were in the area and they began the countdown sequence. The tide was running in, strong, and what winds there were came from behind, make it a downwind start (you generally start upwind, as you can make faster speeds). 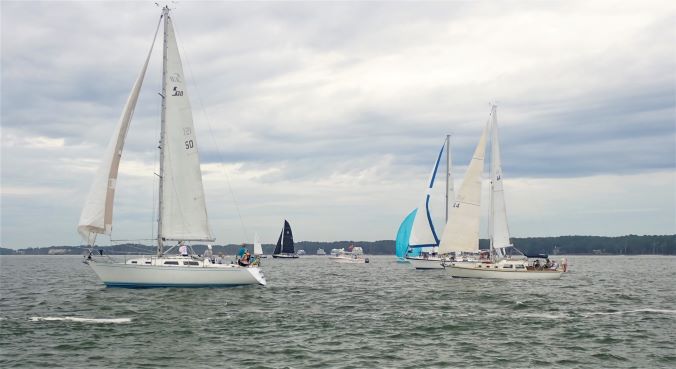 At four minutes before the starts, all the boat were required to kill their motors. They did, then then wind died, and the cruisers (there were only three) were pulled further and further from the starting line.  A minute before the start, they cancelled and waited a few minutes before going again into the six-minute sequence. The same thing happened.  The race chairperson then suggested that the boats motor to out beyond the starting line and let the tied pull them back inside it before the start. On the third attempt, they had a start.  As the cruising boats tend to be slower, they were given ten minutes or so headway before they began the second flight, those of us not racing with spinnakers.

Thankfully, our start went off without a hitch and by 10:45 AM, we were racing, but without a lot of speed. We tried everything, from going wing-on-wing to tacking and running on a reach. It was slow going, but within a few hundred yards of the start line we had passed the cruising class boats.  Soon, the spinnaker class boats started and we were all bobbing around in Calibogue Sound, waiting for a puff to move us a little closer to our destination. It seemed to take forever. We kept looking at the same houses on Daufuskie and the marks in the Savannah River were so far ahead. We watched several container ships make their way out of the harbor and then others make their way into the harbor. Thankfully, without wind, the sky remained gray, reducing the sun and the heat. 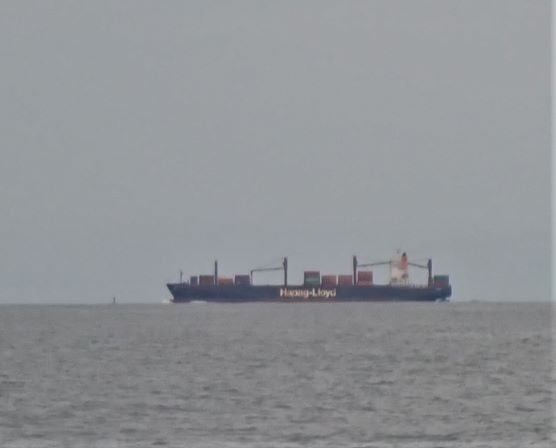 Around noon, we had a short burst of air that allowed us to make our way out of the sound and point eastward, toward the G5 buoy at Tybee Roads. We weren’t making great time, but at least we were moving, which continued until we made the turn south, toward Wassaw Sound. Then the wind died again. It seemed to take forever for us to cross the shipping channel. We had seen many ships in the morning, but thankfully while we were bobbing around in the channel, there were none.  Finally, we reached the port side marks, putting us safely out of the channel and began to make our way south.  Doug B pulled out his fancy binoculars, which allowed us to see well ships that were coming into port, but not strong enough to make out those bathing on Tybee, some two miles to the east. For what seemed to be days, but was only four hours or so, we keep the Tybee Lighthouse directly off our beam. Occasionally, they’d be a puff and we’d make some forward progress (to where the slough that runs between Tybee Island and Little Tybee was parallel to beam), dropping the lighthouse toward our stern. Then the wind would die and we’d drift back. Pretty soon the lighthouse would be off our beam. We talked about all kinds of things, but the only thing I remember being said was by Steve when he announced: “It’s a flat as a millpond out here.” 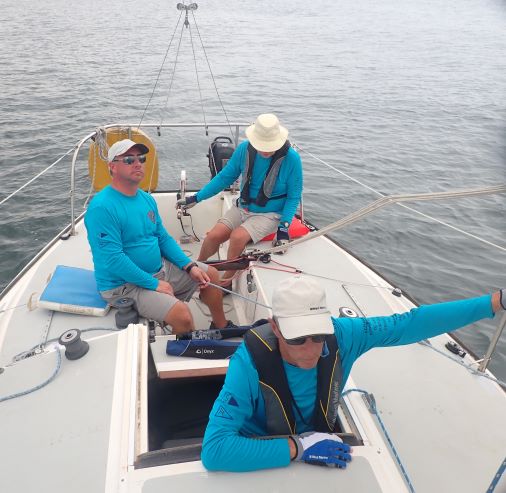 Waiting on wind (Steve holds boom out to catch every bit of wind while I do the same on the pole on the genoa, Doug B looking at sail shapes while Doug P either is looking at his sail app on his phone or is praying…

The chatter on the radio was slim. Occasionally a boat would announce they were giving up the race. Then, around four, there was some discussion over moving the end of the race to the R2W buoy. Since not everyone was within radio contact, such instructions had to be relayed to those behind us. Then, as it got closer to five, the wind slowly began to build. Tybee lighthouse dropped off our stern and we began to pass Little Tybee. The wind picked up and slowly the miles to the buoy began to drop (which we could measure thanks to navigation apps). By five, the wind filled in and we were quickly making out way toward the mark, which could first be seen as just a dot in the distance and slowly became more visible as we saw Todd’s boat coming toward us off starboard. After a day of bobbing, we finally felt like we were racing. 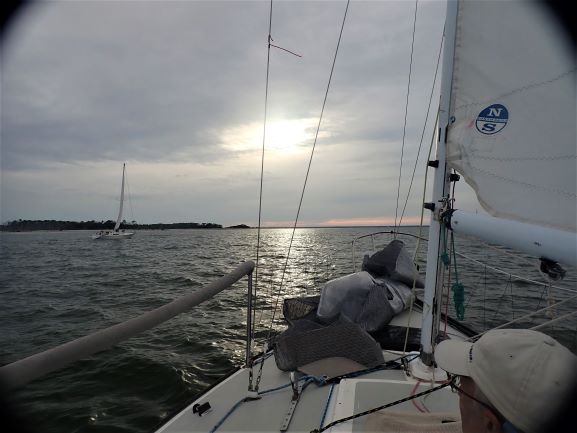 After making the mark, the wind continued as we made our way toward Wassaw Sound. By now, the tide had turned and was coming in, giving us an extra boost. Once we cross the north end of Wassaw, the wind died again. No longer racing, we started our motor and began to putt in, supported by the tide. The inland waters were like a mirror and while we putted, we flaked the mainsail on the boom and secured it with the sail cover. Then we rolled and bagged the geona (foresail or jib) and stowed it away. We got the boat ready so that we when we arrived at the marina, we could tie it up and leave.  It was a bit after 8, when we came into the marina. We tied up and found that the party which had been planned in the grassy area by the marina, but had broken up, had left us some snacks and beers. I enjoyed a bag of chips and a beer. It was dark when I arrived at the marina that morning to carpool to Hilton Head and it was dark when I left the marina to head home. 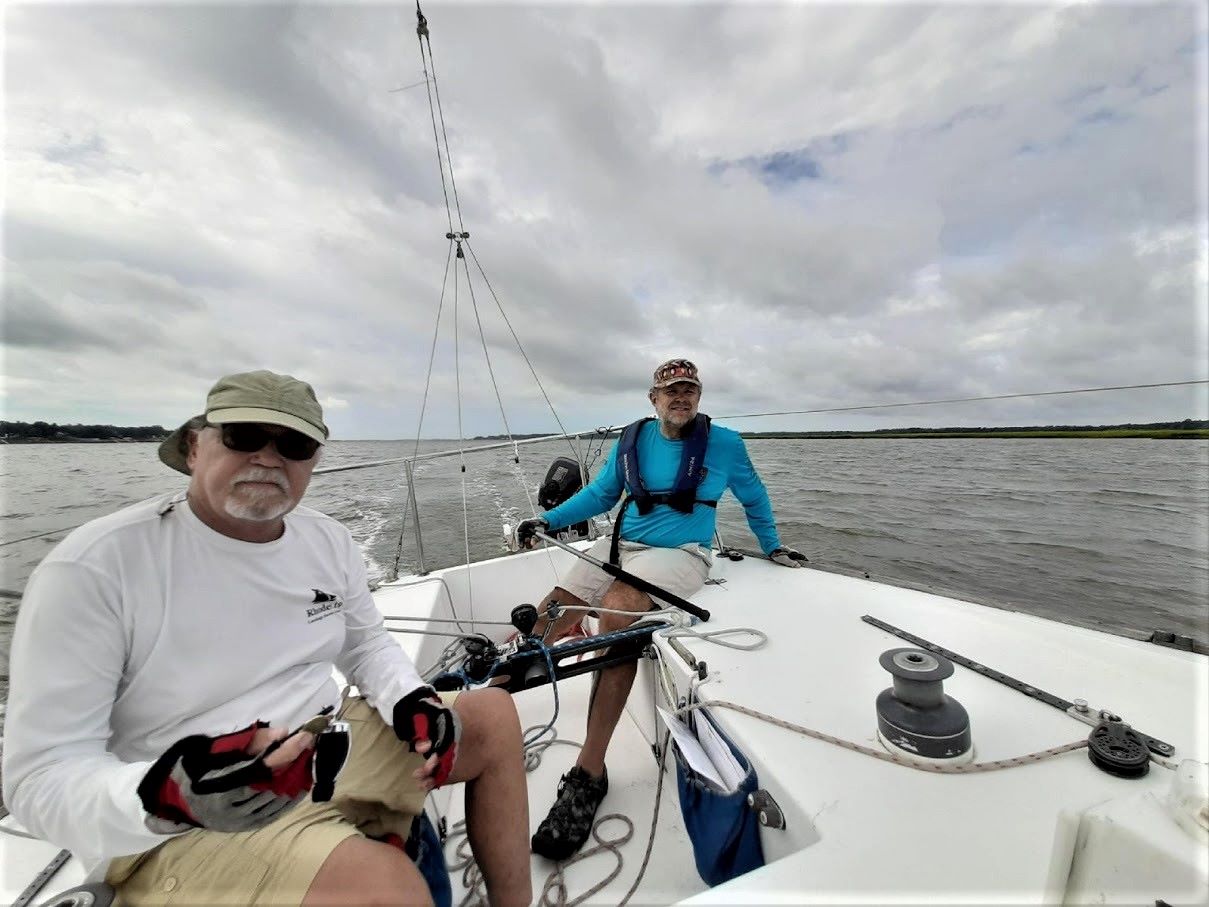 This was the first race since the St. Paddy’s Day race on March 14!  While I’ve been sailing, all the other races and regattas had been cancelled due to Covid. The next Saturday was the Wassaw Cup, in which our crew wasn’t able to sail, so I sailed on another boat, with high winds, we were blown away. There’s one more race, at the end of the month, before I move to the mountains. 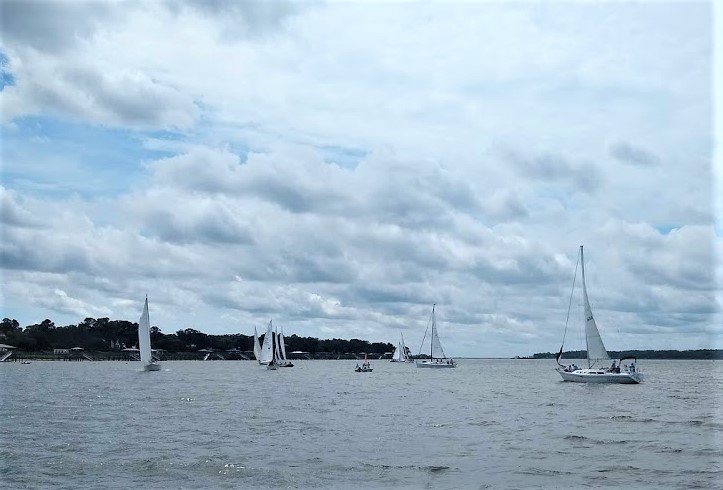 Boats gathering at the start of the Wassaw Cup