An article about barbecue and North Carolina politics in the New York Times today got me thinking about Ron Carroll, who hired me to work for the Boy Scouts in early 1981.  Ron died in 2006, ten years this month.  This is a collection of memories I wrote about Ron.  To reach the NYT article, click here.

With our plates overloaded with b 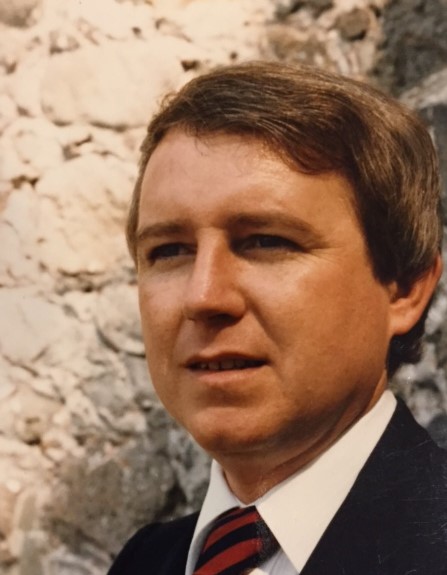 arbecue, cole slaw, baked beans and hushpuppies, Ron and I went searching for empty seats at the makeshift tables that filled Clarkton’s tobacco warehouse. It was a month or so after market, but the sweet smell of Brightleaf Tobacco lingered. We nudged our way to a couple empty seats. Ron turned to the man and his wife sitting next to them and asked if these seats were available.

“Ya’ll good Democrats, aren’t you?” the man asked in a strong southern dialect.

“Hell yeah, wouldn’t vote no other way,” Ron shot back.

I about dropped my plate as I knew Ron had never voted for a Democrat in his life.

It was homecoming day for Jimmy Green, North Carolina’s Lieutenant Governor. Green had just been acquitted of some kind of corruption charge. I was a young district scout executive and since many of Green’s supporters were also scout volunteers, they’d arranged from him to give a sizable gift to our camp and I was there to be a part of presenting him a plaque in front of his friends and neighbors on this day of celebration. Ron was my boss, the council executive, and I had told him about the program and he asked if he could tag along. Waiting for the program to began, we ate our barbeque and drank glasses of ice tea. Ron, with his Mississippi accent, fit right in.

Ron was a salesman, and a good one. He’d recruited me to work for the Boy Scouts, taking a significant pay cut when I left the bakery. He was also a good teacher and mentor and to this day I am indebted to him. Under Ron’s tutelage, I learned to run successful fundraising campaigns which not only raised money, but empowered people to feel a part of the organization. Although on this day in Clarkton, we were honoring someone who’d given a large gift to the scouting program, Ron continually emphasized to his staff that we go after every gift, regardless of size. Emphasizing the importance of grass root gifts, Ron told and retold the story of Big Jim Folsom, a populist governor from Alabama in the mid-20th Century. Whenever Folsom spoke, he passed the hat and encouraged people to put in what they could. “Even if all you have is some change,” Folsom would quip, “that’s fine; every gift is important and we will use your gifts to fight for you.” Folsom’s advisors questioned this policy, reminding him he had plenty of fat-cats backing him and didn’t need to nickel and dime the poor folk, but Folsom knew better. “People make their commitment with money,” he told them, “and if they give me a quarter, I don’t have to worry when the next candidate who comes around seeking their support; they’ve already sealed their commitment to me.

The last time I saw Ron, I asked him about Folsom. We talked for a few minutes about the former governor. Ron, who had later in his career worked with many in Clinton’s administration, told me that Bill Clinton could have learned from Folsom’s straightforward approach. According to Ron, Big Jim had once been caught going into a hotel room with a beautiful young woman who wasn’t his wife. He admitted to his constituents that he’d made a mistake, but went on to say that his opponents were out to get him and that girl had been the bait they’d used and anytime they use bait that appealing, they’re going to catch Big Jim.

“Ron,” I said, “Monica wasn’t that good looking and furthermore, I don’t think Willie was set up.”

Ron laughed and told me another story. A rumor had circulated that Folsom was known to have cocktails with the Kennedy clan. “That’s a damn lie,” Folsom retorted. “Everyone knows I don’t drink cocktails, I drink my whiskey straight, just like you folks.”

Although Ron had learned the skills of motivating people from a populist governor who was also a racist, Ron worked hard to overcome the prejudices instilled in those of us who grew up in the South. That last day I’d spent with Ron, I reminded him of an incident that occurred one day, not long after I’d started working with the Boy Scouts. Ron and I made a call on a Baptist pastor in Evergreen, a small community in Columbus County which did not have a scout troop at this time. Several parents and kids in the community, most of whom were black, had requested that a unit be started. We just needed to find a chartering organization. We had pleasant chat with this pastor, but he insisted that although he’d love to see a scout program, his deacons would have a fit if black boys were running around in their church. I started to argue about this being an unchristian attitude, but Ron cut me off. He was nice and polite and told the pastor that if things changed, to contact us. We quickly left, but as we drove away, Ron muttered, “That lying son-of-a-bitch.”  “Don’t you believe he really wanted the troop,” I asked. Ron said that he felt the pastor and the deacons were of the same mind. Then I asked why he didn’t want to confront the man.  He said that there was no way we were going to change his mind.  It was better to leave, letting him think better of us than we did of him.

Ron chuckled, as I recalled the incident that had happened nearly a quarter century earlier. He wasn’t doing very well, having had numerous surgeries and bouts of chemotherapy in an attempt to fight an aggressive brain cancer. His face was bloated from the drugs and he’d often forget what he was saying. I spent half a day with him while his wife ran errands. At about 11 AM, Ron insisted we have ice cream. An hour later, he decided we needed a sandwich and a beer. Ron was the only boss I had in my life who would treat his staff to drinks at lunch! We talked about working together in the early 80s and what had happened to the two of us since. Ron had risen in the scouting ranks to become the Scout Executive in Washington, DC, where he rubbed shoulders with many of those in government—Republicans and Democrats. He had done well, until his health forced to take a medical retirement, after which he moved back to Wilmington. Although we always exchanged Christmas cards, I had only seen him a couple of times in the 20 years since he’d been my boss. Ron talked about how he hoped to have a chance to write his memoirs before he died. That chance never came. In another two months, Ron would be dead. 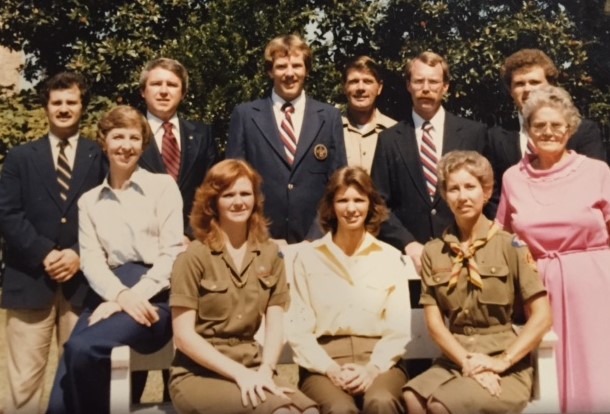 Cape Fear Council staff (~1982).  Back row from left:  John Cabeza (Laurinburg), Ron Carroll (Council Executive), Ray Franks (Wilmington), Andy McKay (Camp Director),  ? (Lumberton), Me (in Whiteville, at this time I had hair and no beard).  I don’t remember all those in the office.  The red head with a uniform is Theresa Smith, the woman with a uniform and neckerchief is Pam Jeffers (she would later marry Ron) and the  woman in pink that is hiding me is Ms. Lillian.