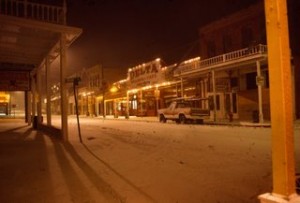 This is a talk I presented to the Skidaway Island Kiwanis Club this morning.

Christmas 1988.  It was the first time that I would not have any family around during the holidays.  It was my first white Christmas.  And it was a holy Christmas.  I was taking a year off from seminary to serve as a student pastor in Virginia City, Nevada, the old mining town made famous by the TV show, Bonanza.

The week leading up to Christmas had been hectic and to top it all, a zephyr had blown in two days before Christmas.  You could see the clouds rolling across the Sierras.  Soon snow was flying.  The gale force wind made the frigid air feel even colder.  I wore heavy sweaters even inside.  By late morning of Christmas Eve, there was enough snow to ski on the streets of Virginia City.  As everything was ready for that evenings’ service, I joined a group of friends skiing down the old railroad grade to Gold Hill.

When I got back, I stopped by the church and helped shovel the snow off the steps.  We turned up the heat inside.  Snow was drifting and the high winds was making travel dangerous.  About an hour before the service, we got word that the steep roads that led into town from Carson City and Reno were both closed. This was a problem for we were having a “Lessons and Carol’s service” and several of our younger readers were from off the mountain.  Howard, our organist, assured me that everything would work out.  He had already been contacted by St. Mary’s of the Mountain, the Catholic Church in town, to see if he could play for their Midnight Mass as their organist wasn’t able to make it in.

It was a great service.  People began to flock in and we reassigned readings.  As the service began, the building creaked and, at times, when the wind was just right, it would seep into the building enough to cause the candles to flicker.  Our worship service closed with candles flickering in the dark as the gathered sang “Silent Night.”

Afterwards, a group of us headed to the Mark Twain, one of the many saloons along C Street.  We had great conversation, waiting till after 11 PM before heading down to St Mary’s in order to support Howard at the Midnight Mass.  When I say, “we went down to the church,” that’s just what we did as Virginia City sits on the eastern flank of Mt. Davidson and every block  you travel you gain or lose significant elevation.

Sometime during the mass, the raging storm blew itself out.  When we stepped out of the church, we were greeted with clear skies.  Crisp cold air billowed from my mouth like a chimney.   I zipped my coat tight, bid my friends a Merry Christmas and then headed home, walking up the hill toward the lighted V, high on Mount Davidson.  It was so cold the snow squeaked under my feet.  The scent of pinion pine burning in woodstoves filled the air.  C Street was nearly deserted.  When I got to B Street, where I lived, I was breathing heavily.  I paused to survey the town.  Lights were still on in a few houses and they stood as cheery refuges from the cold.  But most were dark.  Folks had settled in for a long winter’s nap.  Then I looked up into the dark sky dotted with brilliant stars.  Orion was overhead, followed to the southeast by his faithful dog.  To the north, the Dipper was rising high in the sky.  Although alone, I felt a presence… 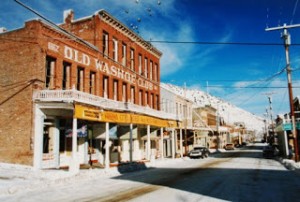 Things had worked out that evening.  We had a wonderful worship service at the Presbyterian Church and several of us were blessed with a second worship service at midnight.  Even though my family were thousands of miles away, I was with good friends.  And I felt God’s love, a love that had come into this world in a child.  The hymns and carols of the evening were being replayed in my head, but the one that seemed most appropriate was “Let All Mortal Flesh Keep Silence.”  I had experienced something holy that night and a silent awe was a fitting response.

This ancient hymn has its roots in the early church and used as the beginning of the Communion rite in the Orthodox Churches.  In English, we sing the words which recall God’s mystery to Picardy, an old French folk melody.  The music is haunting, as it should be, when we contemplate the incarnation, God coming to us in the flesh.