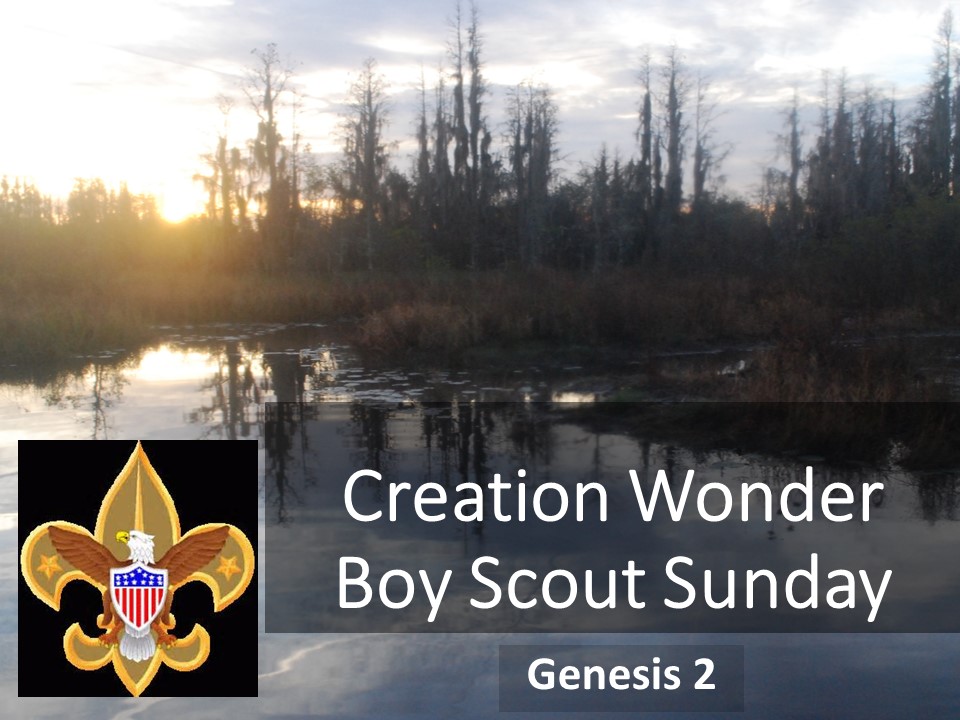 This past Wednesday, as I was coming back from a worship conference at Calvin College on the train, I had an afternoon layover in Washington D.C.  Union Station in Washington is just northwest of the Capitol.  With several hours to kill, I walked down to the capitol and down the mall to the National Gallery of Art.  I hadn’t been there since a child.  Walking through the gallery, I came into a room with four large paintings by Thomas Cole, who is considered a founder of the Hudson River School of Art.  I knew of this work, which is titled “The Voyage of Life,” but had never seen them except for in a book.  The four large paintings represents Cole’s vision of our journey through life, from infancy and childhood through old age. 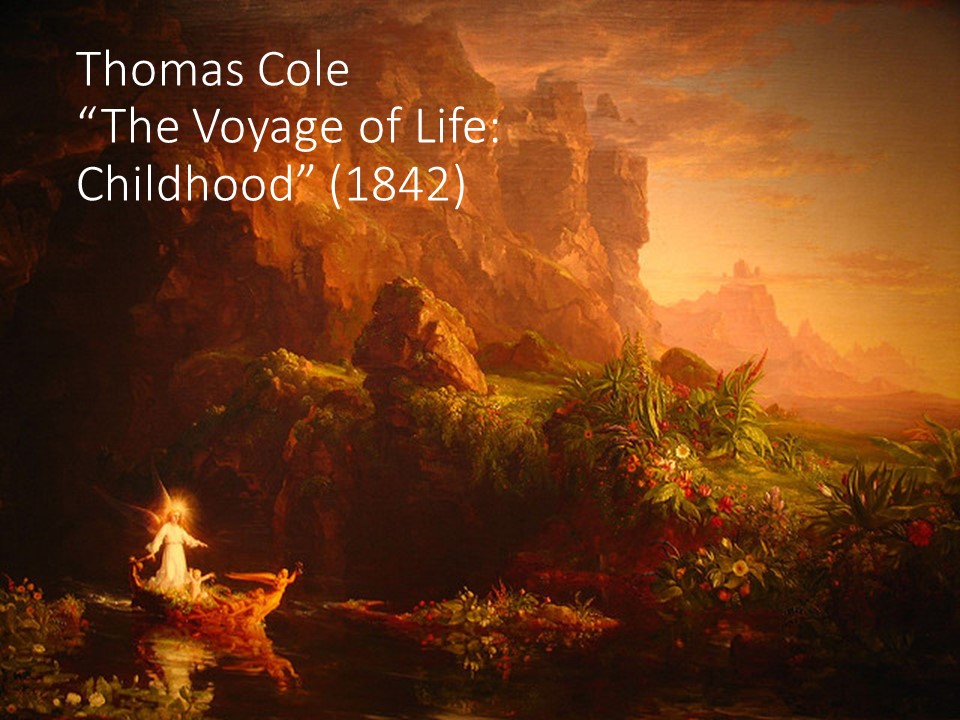 In the first painting, titled childhood, a small child emerges from a womb-like cavern in a boat steered by an angel.  The sun is just about to rise over the horizon.  The painting shows the promise of a new day. 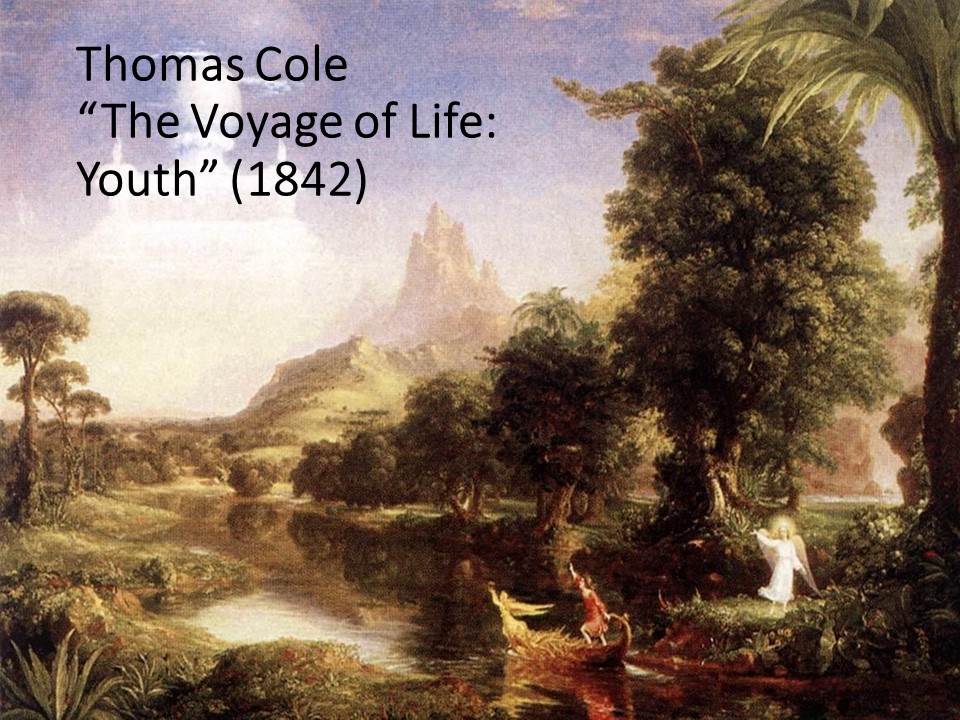 In the second, titled “Youth”, the child is older and is able to take the helm and guide the boat.  He’s like one of our Boy Scouts, having earned his rowing merit badge.  He’s able to take control of his life and there is a castle in the sky reminding us of how large our dreams can be during our youth.  The angel is present; however, she’s moved to the bank, to guide and watch over the young man. 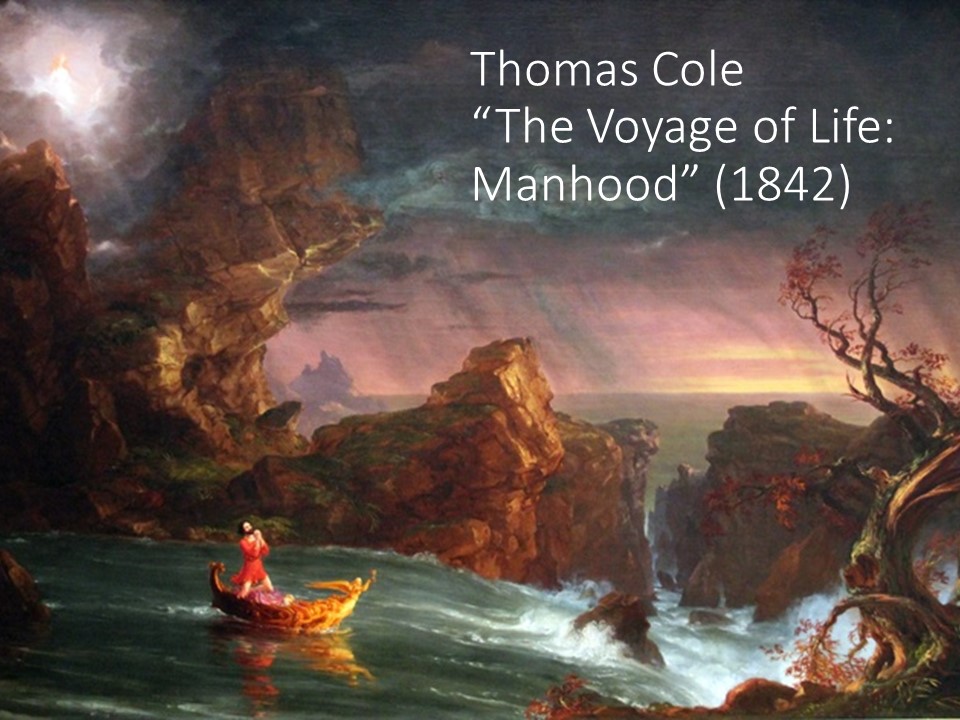 In the third painting, the colors darken and storms rage.  It is titled “Manhood.”  The man in the boat has lost his rudder and is approaching roaring rapids, and in the distance is the sea.  He prays.  There is still an angel in the painting, but it’s up in the sky, far away.  This dark view of adult life may have come from Cole’s on life, for he died young, in his forties. 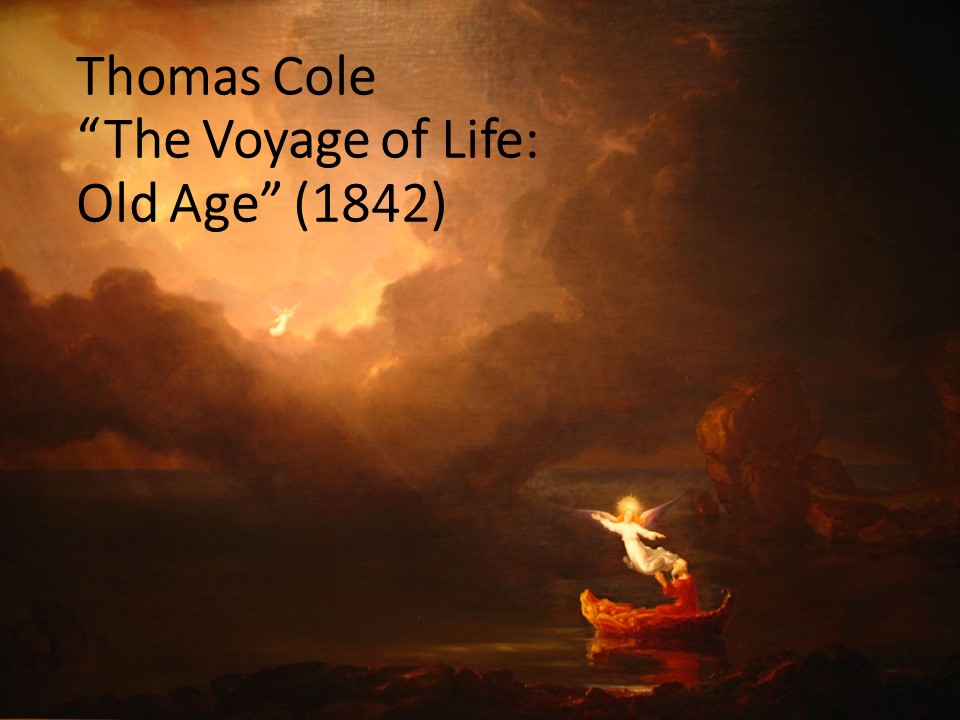 The final painting, titled “Old Age”, has the boat out on the sea as the sun sets.  The man is older and an angel is beckoning him to come.  His time is over and all is calm.  As I looked at the paintings, which I really like and I was glad to be able to spend some time with the originals,[1] I realized that Cole had missed something important.  He certainly tried to capture the idea that our journey through life, even with the trials we endure, is guided by divine providence as represented by the angels.  But the man is alone, the whole time he’s the only one in the boat.  And that’s not how God designed things, as we’re going to see in our text for today.  God creates us to be in relationship, in community, with him and with one another.[2]  Read Genesis 2:4b-25:

In my last two sermons, we looked that the first account of creation as presented in Genesis 1.  There we have an overview of creation from outside of the cosmos.  It’s as if we’re on the space station looking down on earth.  As I suggested in those sermons, we must not get caught up on trying to reconcile the Biblical creation accounts with science.  Instead, these stories in Genesis have a much deeper meaning about who we are and how we relate to God and to God’s creation.  Today, instead of a top down look at creation, we have a more intimate view of God at work and learn more of our destiny upon the earth God created. 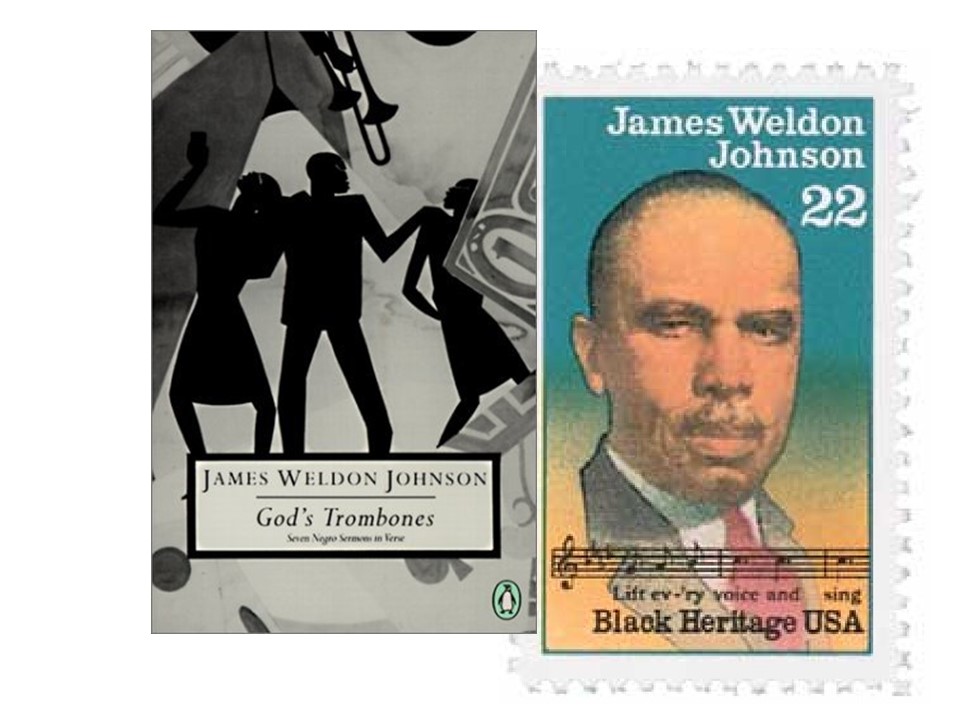 According to Genesis 2, the world before Adam was lonely.  No plants, no shrubs, no grass, no animals, and most importantly no people running around…  Listen, as I read from a sermon James Weldon Johnson recalled given by an African-American preacher around the turn of the century

Then God sat down-

On the side of a hill where he could think;

By a deep wide river he sat down:

With his head in his hands,

Till he thought: “I’ll make me a man!

Up from the bed of the river

And by the bank of the river

he kneeled him down;

And there the great God Almighty

Who lit the sun and fixed it in the sky,

Who flung the stars to the most far corner of the night,

Who rounded the earth in the middle of his hand;

Kneeled down in the dust

Toiling over a lump of clay

Till he shaped it in his own image;

Then into it he blew the breath of life,

And man became a living soul.[3]

Of course God does not stop with the creation of a person.  God creates a garden.  Imagine the garden, with its walls to protect it, with its trees for shade and flowers for beauty, with its vegetables and fruits for food.  In this garden named Eden, God places the person just created.  After-all, God needs a caretaker for the garden, someone to till and keep it, someone to harvest and eat of its abundance.  Everything in the garden is given to him to eat, with one exception…  We’ll talk about that exception in next week’s sermon.  So stay tune!

God then realizes that the man is alone, that he needs a helper, a companion.  God doesn’t create us to be hermits, to be isolated from himself or from others, as Thomas Cole’s paintings suggest.  So God’s begins to create animals and brings them to the man to name.  In scripture, the ability to name implies power, so we see this first human exercising dominion over creation.  But it’s all a divine joke, because of all the animals that come forth, none are worthy to be the man’s only companion. Certainly God knows that none of these animals will suffice, but this is a story with a much deeper meaning.[4] So from the man, God creates a woman, Eve.  Finally, the man has a suitable companion, and the two of them can tend the garden and live before God.

Walter Bruggerman, a well-known Old Testament scholar, notes that this passage is about how human beings are to live before God.  According to him, there are three key concepts in here: vocation, permission, and prohibition.[5] We’ll focus on the prohibition next week.

Let’s look at the other two concepts: vocation and permission…  At the beginning, the earth must have been pretty boring without plants and herbs.  The reason given for this bareness in verse five is two-fold: God has not yet sent rain and there is no one to till the ground.  So God creates Adam and then creates a well-watered garden where he places the man.  The need for a caretaker is now achieved.  There is someone to care for the plants and trees that have appeared on earth.   And Adam, the care-taker is no longer alone.

There is a mutuality expressed here: God provides for us, yet we are also needed to fulfill God’s plans.  Work is not something bad or something we should try to avoid.  Work is good; it is sanctified; God ordains it.  After the first human being has a task to perform, God rewards him by providing food for his nourishment.  God creates and provides!

Secondly, there is permission to eat of the bounty of the garden.  The first couple are not to toil just for God, they are able to raise their own food and enjoy the benefits of creation.

This passage shows us the way to live in God’s world.  We have responsibilities, we have privileges, and we’re not alone.  We are to live in community.

What does all this mean for you and me today?  First, we are entrusted with God’s creation.  Our scouts take an oath to be faithful in their duty toward God and part of that involves living responsibility in the manner God has created us.  We are placed on earth for a purpose?  We are to live with one another and take care of God’s earth!  At Skidaway Island Presbyterian Church, we talk about reflecting the face of Jesus to the world.  What will you do this week to make a positive difference in our world?  What can you do to foster community, to build bridges with others, to show Jesus’ face?  Unlike Adam, we may not be called to till the land, but we are called to work for a better world, which is how we fulfill our purpose within God’s creation.  Amen.

[1] Cole actually painted two sets of these scenes.  When the family that owned the first refused to allow them to be shown, he painted the second set from memory.  The second set is the one at the National Gallery.  The first set is in a gallery in Utica, NY.