Over the past couple of decades there have been debates over the visible presence of the Ten Commandments in public places like courthouses. This has brought out the worse on all sides, those in favor of and those against such monuments. As Christians, we need to realize what’s most important. It’s not the monuments.[1] It’s obeying the law. It’s allowing God to write the law in our hearts as we heard in our Old Testament reading.[2] Yes, God’s law is important. It drives us to Scripture, where we can understand our need for grace in Jesus Christ, in whom we’re to place our faith.[3] Do you catch that? In that sentence I touched on the first four “Solas” or themes of the Reformation.

Deanie and I have been preaching about the “solas” since the first of October and now we’re on the fourth Sola: ”Scripture Alone.” It’s time for a test! I want to see what you’ve remembered from this series. What are the first three solas? (Grace Alone, Faith Alone, Christ Alone). Today, we’ll speak of Scripture Alone, and next week we’ll wrap it all up with the overarching theme, “To God be the Glory.”

I encourage you to be here next Sunday as a professor of mine, Dr. Charles Partee, will preach. Dr. Partee was the most popular preacher of the faculty of the seminary I attended.  Everyone made an effort to be in chapel on the days he was in the pulpit. You had no idea where his sermon might lead. But the message was always entertaining and grounded in Scripture. 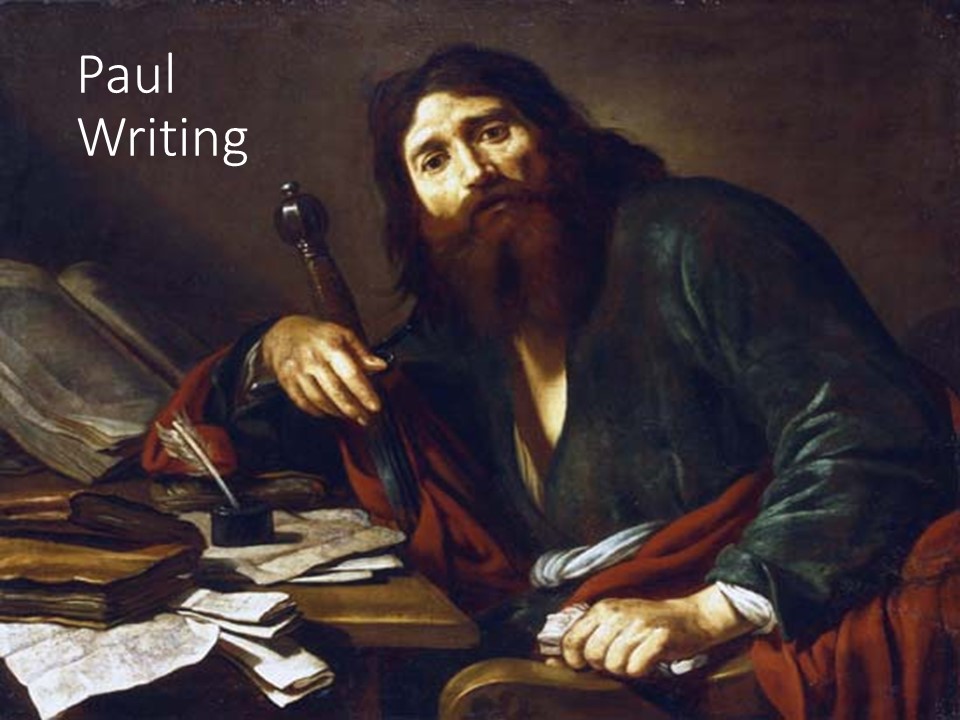 Our Scripture for today’s sermon comes from Second Timothy. There’s some debate as to if this letter was actually written by Paul to Timothy. Maybe it was written by a later disciple of Paul’s, some suggest.[4] But for the importance of our sermon today, let’s take the authorship of the letter at face value while seeking out the deeper truths of the letter. The letter opens with a reference to Timothy as “my beloved child.” This is one of the most personal sounding letters in Scripture, written by a teacher who knew his time on earth was limited, so he wants to impress his star student to continue his work of evangelism, of telling others about Jesus. 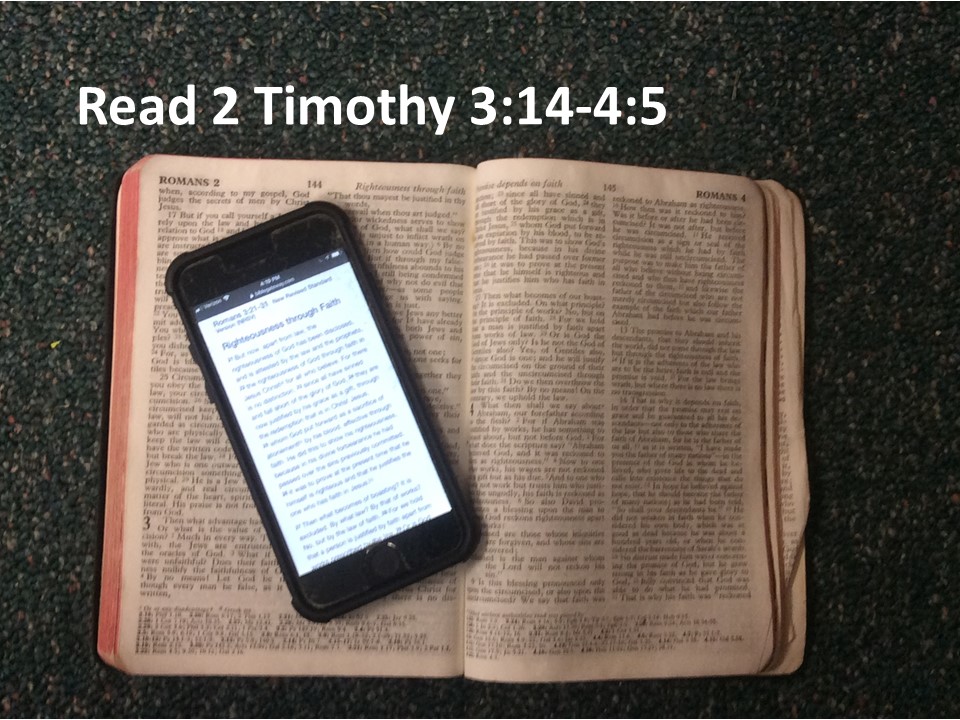 We should understand that although Timothy is referred to as his child, he’s no longer a kid. He’s a grown man with responsibility over a number of churches. Let’s listen to God’s Word as I read from 2 Timothy 3:14-4:5.

The Westminster Confession of Faith, the key confessional document of Reformed Christians from the British Isles, which would be us Presbyterians, begins this way: 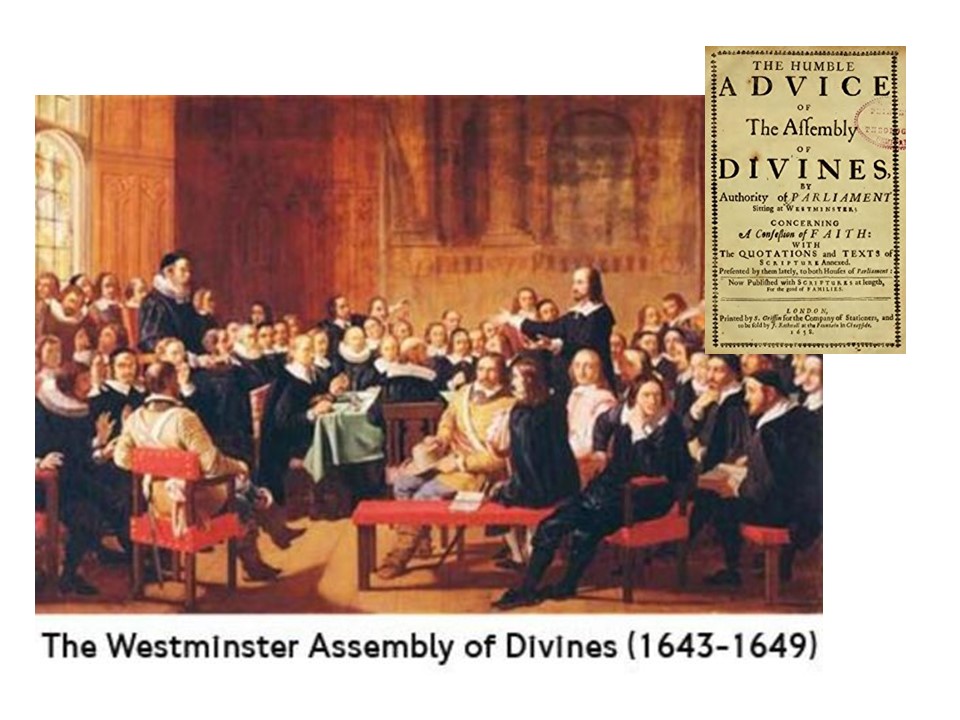 Although the light of nature and the works of creation and providence, do so far manifest the goodness, wisdom, and power of God, as to leave men (and that includes women) inexcusable; yet they are not sufficient to give that knowledge of God, and of his will, which is necessary until salvation…

In other words, although we can know of God and God’s goodness in the natural world, there is a limit. Nature doesn’t teach us how to obtain salvation in Christ. The Confession continues:

therefore it pleased the Lord…to reveal himself, and to declare that his will unto his church… to commit the same whole unto writing; which maketh the Holy Scriptures to be most necessary…[5]

In other words, we need a revelation! We need to understand God’s will and so God saw to it that we have the Scriptures.

The Bible is important and the Reformers knew it. It was through the Scriptures, especially Paul’s letters to the Romans and the Galatians, that Luther found hope in Jesus. All the Reformers held high regard for the Bible and strove to make the text available in the language of the people. Two centuries before the Reformation, John Wycliffe insisted that his English parishioners hear the Bible read in English and not Latin. Luther felt this, too, and translated the Bible into German. Once the printing press became readily available in the late 15th Century, Bibles were printed and people began reading. They no longer had to depend on the church to tell them what was in Scripture. This threatened the established church, especially as the Reformers insisted that authority belonged to God’s Word, not to the institutional church. Scripture Alone means that our trust is not in some human institution. It’s in God’s Word.

This passage can be divided into two parts. The end of the third chapter is concerned with the grounding of our faith.  That is, how we come to know and to trust in Jesus Christ. The beginning verses of the fourth chapter deal with its applications for our faith. What we should be doing because we trust in Christ Jesus as our Savior?

Paul begins by reminding Timothy that his faith was built upon the teachings of those he trusted. Furthermore, Paul tells him that these teachings can be confirmed through Scripture. It’s important to notice here, according to what Paul says, good fuzzy feelings are not what confirms our faith. Such emotional feelings are transitory; our faith is to be grounded in something solid. To put what Paul says in theological terms, Timothy’s faith is grounded in tradition confirmed by the Word of God.

What teachings had Timothy received? Paul says he was taught by those he trusted. Here, we assume Paul is speaking about Timothy’s mother and grandmother, Eunice and Lois. Timothy’s grew up learning the Jewish scriptures from his mother’s side of the family. At some point in his childhood, after an encounter with Paul, his mother and grandmother accepted Christ. Later, Timothy followed their example and became a companion of Paul’s.

It’s the teachings of those whom he trusted that gives Timothy confidence in the gospel of Jesus Christ. We should all learn from this. The church has a role in teaching scriptures, but so do parents and grandparents. We are to share our faith with children. We are to show them the importance of the Bible in our lives.

In the second part of this passage, Paul moves on to Timothy’s task at hand—the preaching of the gospel. In the presence of Jesus Christ, Timothy is to proclaim the good news, regardless of conditions.

Timothy is like the man who didn’t want to go to church one Sunday morning. Trying to get to the heart of the matter, his wife asked him why he didn’t want to go. He spoke about those who didn’t like him at church. He complained about the hypocrisy of members and how stuffy they are. And he complained that he was bored. Looking at his wife, he asked her to give him one good reason for him to go. She paused a moment and then said: “You’re the preacher!” 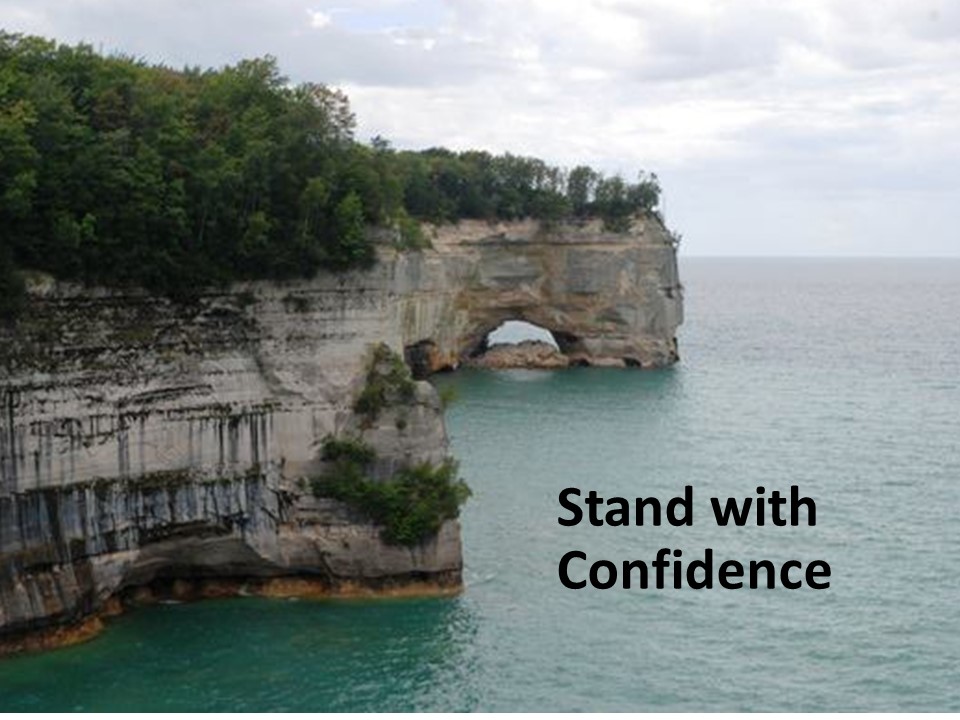 Timothy has his marching orders and he’s to carry them out whether or not it’s what people want to hear, whether or not he suffers for his faithfulness.

“Convince, rebuke and encourage,” Paul encourages. Convince those who don’t believe, rebuke those who have wrong ideas and encourage those disciples who are building up the kingdom. Finally, he concludes his first list of instructions, reminding Timothy that patience is needed in teaching.

Now Paul had a concern. He knows people listen to those who say what they want to hear. There’s a name for that today: “confirmation bias.” We tend to listen to those who confirm what we want to believe. It’s why Republicans listen to Fox News and Democrats to MSNBC. It’s why people “like” outlandish “news” on Facebook when it fits into what they want to believe. But there’s a danger when you only listen to what you want to hear—you confirm your biases. Paul has heard false teachers leading people away from Jesus Christ and so he shares his concern with Timothy. “Get to work, Boy,” he says, “Don’t miss an opportunity to proclaim the Gospel. We got to nip these false teachers in the bud.”

After expressing his concern for false teaching, Paul returns to giving instruction. “As for you, Timothy,” he says, “Be sober, endure suffering, do the work of an evangelist, and carry out your ministry fully.” 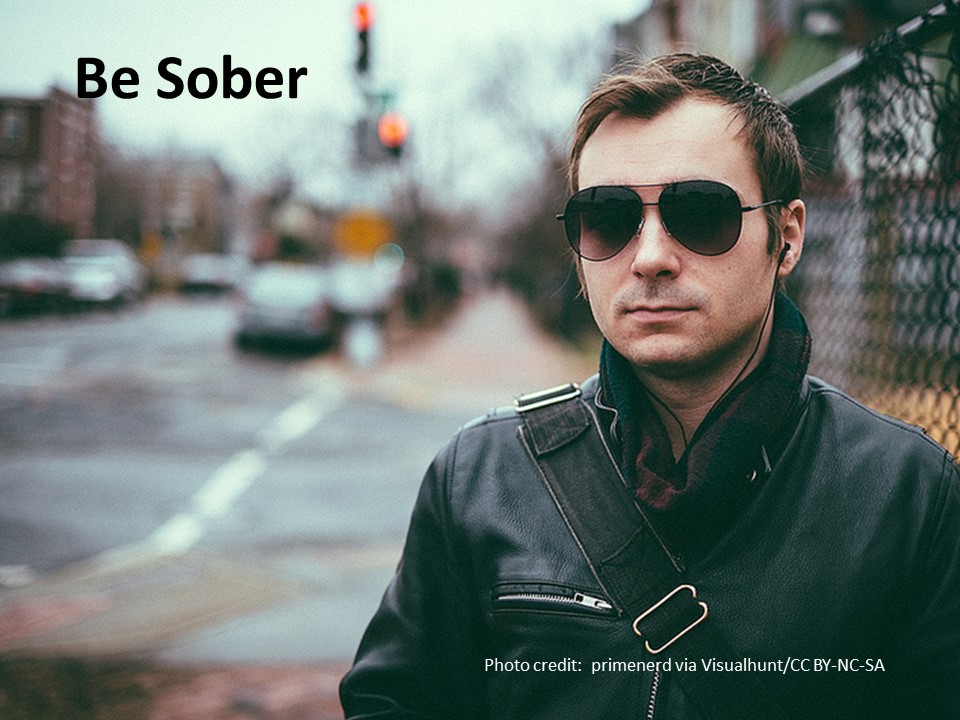 Be sober can also be translated as “Keep your head.” Paul is not telling Timothy not to drink;[6] instead, he’s telling him to keep his head clear so that he does not lose sight of his ultimate goal of being a loyal disciple of Jesus Christ.

As for endure suffering. Paul is a realist. He knows accepting Christ will not always bring joy and prosperity to one’s life… Paul knows this well, after all he’s spent time in jail and had been beaten for his testimony.[7] Furthermore, he knows suffering is often a lot for God’s people as seen in Scripture. Remember Job? Remember Jeremiah? A lot of times the world doesn’t want to hear what the church has to say…

We should gently share the message, and leave the decision for others and for the Holy Spirit. The greatest tool we have for evangelism, for sharing God’s love, is to strive to live a Christ-like life. That doesn’t go for just Sunday mornings. The measure of a great church is not how many people are there on Sunday morning, but what is happening to the congregation when the building is empty.” How are people living their faith in the workplace or on the golf course, when they are eating out or waiting in traffic? It’s up to all of us to live a Christian life seven days a week.

The reason Paul is so concerned that Timothy continue in his work is that Paul knows he’s at the end of his ministry.  Paul told Timothy that he’s being poured out as a sacrifice.[8]  But Paul was not bitter at his demise. Instead, he’s confident that he had done his best: “I have fought the good fight; I have finished the race; I have kept the faith,” he says later in the letter.[9] Paul’s not boasting here. He doesn’t say I won the battle, for he understood that the battle has already been won by Jesus Christ.

Paul’s message for Timothy is valid for us today as we strive to fulfill our calling here on Skidaway Island. “Stay with it, don’t get discouraged,” Paul would tell us. Trust in the Scriptures and take God’s word to heart. 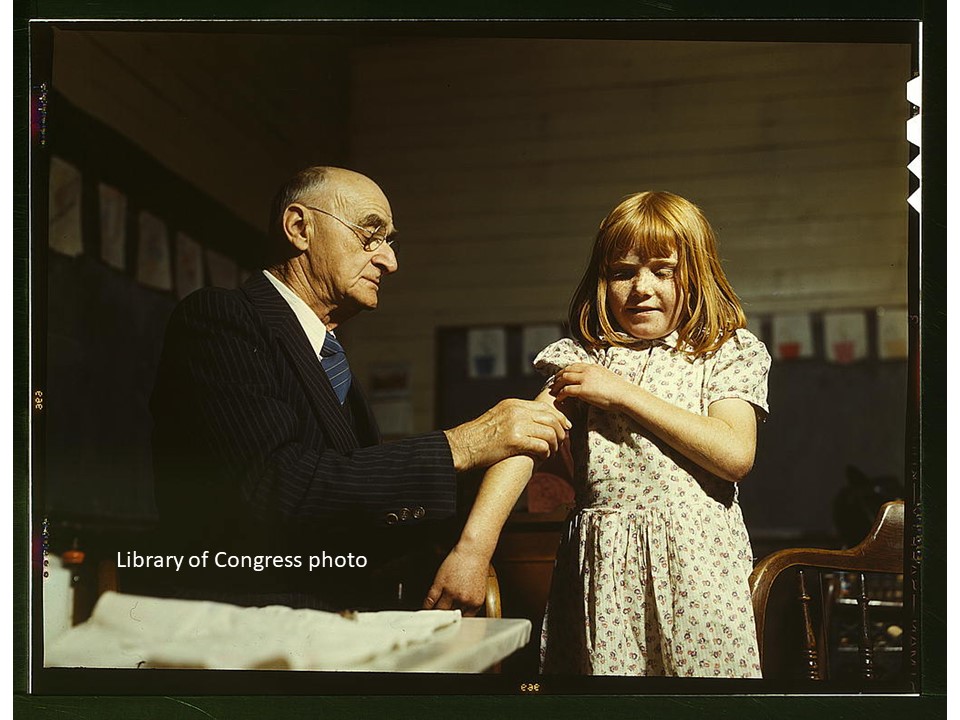 There’s a little girl of three who had the flu. Her mother takes her to a pediatrician for an examination. The doctor tries to make the sniffling young child comfortable so when he looks into her ears, he asks, “Is Donald Duck in here?” “No,” she says. Checking her throat, he asks, “Is Mickey Mouse down there?” “No, silly,” she chuckles. Then he put his stethoscope on her chest and asked if Barney is in her heart? “No,” the little girl says firmly, “Jesus is in my heart! Barney’s on my underpants.”

Hold fast to Scripture but be like that little girl and let people know that Jesus is in our hearts. (But remember, we’re adults so let’s keep our underwear to ourselves.) Amen.

[1] For more about my thoughts on the commandments see this editorial I wrote for the Presbyterian Outlook in 2003: http://skidawaypres.org/pastor/?p=1123

[3] See “The Second Helvetic Confession”, Chapter XII, in the “Book of Confessions of the Presbyterian Church USA (5.083).

[6] In his first letter, Paul even encourages Timothy to “take a little for his stomach.”  See 1 Timothy 5:23