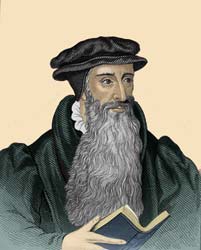 For the past two months, I have tried to hit on some of the key tenets of the Presbyterian Church while linking these topics with theologians who were instrumental within our Reformed Tradition.  Today, my topic is going to be the church and since we are celebrating the Kirkin today, we’re borrowing prayers and liturgy from the Scottish Reformer, John Knox.  Of all the well-known Reformers, Knox perhaps suffered the most, spending a year and a half as a galley slave in a French navy vessel after the French intervened into the Scottish troubles on behalf of the Roman Church.  He was also one of the most fervent Reforms as can be seen in his prayers (I’ve toned down some of them).

In the Kirkin’, those of us of Scottish descent (and I’m from the MacKenzie clan) honor our extended family.  But more important than this family is the larger family to which we all belong, the family of God.  Knox, who during a period of exile from Scotland studied under John Calvin, insisted that the true Church could be found whether the word was rightly proclaimed, sacraments rightly administered, and discipline maintained according to Scripture.  This three-fold marks of the church adds one to Calvin’s, who only insisted on the first two marks for the true church.[1]  But the “marks of the true church” need to be held up against Scripture.   Listen to how Paul describes the Christian community and how we are connected first to God and then to one another. Read Ephesians 2:11-22.

What’s God’s vision?  That’s the most important question we, as disciples of Jesus, should be asking… What ultimately matters isn’t what we want; it’s what God wants.  Our passage this morning provides a clear outline of God’s vision—the mending of a broken world through Jesus Christ.

In an article titled “Living the Vision of God,” Dallas Willard tells a story that illustrates what it means to be committed to the Almighty God and not a substitute:

When you go to Assisi, you will find many people who talk a great deal about St. Francis, many monuments to him, and many businesses thriving by selling memorabilia of him.  But you will not find anyone who carries in himself the fire that Francis carried.  No doubt many fine folks are there, but they do not have the character of Francis, nor do they do the deeds of Francis, nor have his effects.[2]

He goes on to write about how Francis stayed focused to the vision of God.  There was a fire within him that caused him to challenge the church of the age as he worked to help the poor and to bring people together in Jesus Christ.  Willard’s point in his short essay is that we often become involved in the good works or in mission of the church and forget the vision of God.  Everything we do here at Skidaway Island Presbyterian Church, as well as in multitude of other congregations around the globe, needs to be grounded in God’s vision.

In verse 19, Paul lays out God’s vision.  We’re no longer strangers and aliens, but citizens and saints and members of the household of God.  Then Paul describes God’s vision as a building project.  But it’s not a project where all the material is delivered from a lumber yard and deposited in neat piles accessible to the carpenters: the 2x4’s here, the 2x6’s there, the sheeting over yonder…  Instead, the materials needed for this building are scattered and isolated, estranged and cut-off from each other.  So God starts with the cornerstone, which is Christ.  Then he sets the foundation: the apostles and prophets.  With a strong base with which to begin, the structure can begin to rise up using material that has to be brought together from afar until at last there is a spiritual dwelling place for God.  This spiritual dwelling place is the church; the place where those of us who have accepted what Christ has done for them can be at home.

Charles Hodge, a professor at Princeton and probably the greatest American theologian of the 19th Century, in commenting on this passage makes this claim:  “To be alien from the church, therefore, is to be an alien from God.  It is to be without Christ and without hope.”[3]  John Knox, the principle author of the Scots Confession, a part of which we’ll say together in a few minutes, says that without of the Kirk (the church) we won’t have eternal life.[4]

The doctrine of the church is important.  What Hodge and Knox insists is that it’s impossible to be a Christian outside of a community. Jesus was always calling people together. We are not Lone Rangers.

Next Sunday, we’ll celebrate the Lord’s Supper.  The imagery of the table around which we gather with Christ as the host is just a follow-up on what happens throughout the Gospels, people coming together and being in fellowship.  If you remember the stories of Jesus, you may be surprised by who sits at the table: a sinner, to the sinner’s right is a tax collectors, across the table is a prostitute, and then there are a few religious leaders, the disciples, along with a mother-in-law or two, and other family members.[5]  Jesus calls us together, out of our brokenness, where we are united and made whole through him and through the fellowship with others.

Paul begins our text recalling the conditions of the Christians in Ephesus before their conversion.  It appears most of the congregation were Gentile converts to the faith.[6]  They were aliens from Israel, cut off from the faith and without hope.  But Christ changes that!  The dividing wall between the Jews and the Gentiles is removed.  Remember, at the crucifixion the veil at the temple that separated the worshippers from the Holy of Holies split, signaling the barriers to God are removed.[7] God comes to us in Jesus Christ, even though we are sinful, so that we might all be reconciled to God.  As Paul says in verse 15, there is no longer two, but one new humanity.  We may come under different tartans, but inside these walls, we are all the same.  All who accept and believe in Jesus are given new passports.  We’re now citizens of God’s kingdom; we are now members of God’s household.

Elsewhere in the letter, Paul speaks of our being “adopted” by God.[8]  In the Scots Confess, we’re told that God has chosen from all ages, realms, nations and tongues those who make up his church.[9]  Christians are all part of the same family which is why we’re to be at peace with one another, loving and enjoying each other’s fellowship.  However, this doesn’t mean we don’t also love those who are not believers, for only to love those inside the church would be hypocritical.  Not all people are children of God, for not everyone has been adopted into the family.[10]  But everyone—in and out of the family—is loved by God and created by God in His image.  So, as we strive to imitate our Savior’s example, we love everyone!  However, if we can’t get along with those within the family, how are we going to show those outside the family our love?

Part of the problem of the church today, and I’m talking about the church in general, is that we are so divided and so distrustful of each other.  Liberals or progressives don’t like those who are conservative or more orthodox and neither do those who are conservative like those who are liberal.  In this way, we mirror society!  Sometimes one congregation will hold a grudge against another congregation.  But the divisions aren’t just between congregations and denominations; they can also be between groups of people within a congregation or within a denomination.  Such groups insist on things being their way.  They insist that they are right.  Where is the humility displayed by Jesus?  We’re supposed to be a family; look around and remember to love everyone!

A few years ago, Dan Kimball, a pastor who has done a lot of work with the “emerging generation,” published a book titled, They Like Jesus But Not the Church.[11]  When you think about how the church sometimes behaves, it is easy to see why they don’t want to be a part of it.  But Jesus doesn’t call us into the church to be contentious or to feel self-righteous.  We’re called into this community to love one another and to show the world another way of living.

One of the “Great Ends” of the Presbyterian Church states, we’re to exhibit “the Kingdom of Heaven to the world.”[12]  How are we doing at exhibiting God’s kingdom?  In another place in foundations of our church’s polity, the church is described as “a community of love, where sin is forgiven, reconciliation is accomplished, and the dividing walls of hostility are torn down.”[13]  When the church lives into its ideals, we will create a place where people will be drawn to us.  As the old folk song goes, “They’ll know we are Christians by our love.”

God loves us and has called us together so that we might love one another.  Will we?  Ask yourself, “what will ‘I’ do this week to show love to those who are around me?”  May we, in the mighty name of Jesus Christ, make our part of the world a better place.   Amen.

[2] Dallas Willard, “Living in the Vision of God,” http://www.dwillard.org/articles/artview.asp?artID=96

[11] Dan Kimball, They Like Jesus But Not the Church: Insights from Emerging Generations (Grand Rapids: Zondervan, 2007).