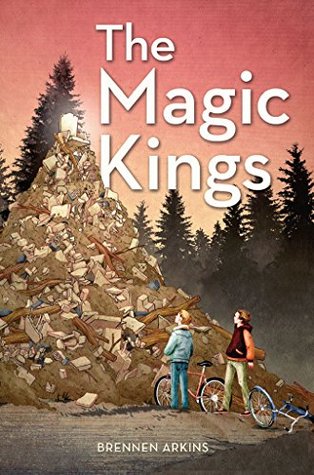 The transition from elementary to middle school is a tough time for all students.  For Alan and his classmates, it is made more uncertain by the 911 terrorist attacks that occurs at the beginning of their last year of elementary school. Alan’s life is filled with challenges.  He’s being raised by a single mother. His father died when he was much younger. He’s now slowly coming to a realization of what it means to have a mother that is an alcoholic.  Arkins tells this story through the eyes of Alan. As a pre-teen kid, there are a lot of things he does not clearly understand. Like Alan, the reader is slowly provided clues.  Alan understands his mother is having problem with her former boyfriend, Art, who seems to be a good male role model for Alan. It appears Art and Alan’s mother both have issues with alcohol and even though they break up, Art helps her become involved with Alcoholics Anonymous.

As an escape from the confusing world of adults, Alan and his best friend Zak play in a fantasy world. Yet, they sense things are coming to an end (this will be their last year to “trick-or-treat” so they decide to make the best of it). But while they sense things are ending, they are excited about the fantasy world in which they create. They find a special spot on the other side of town (and across a dangerous bridge that they must ride across on their bicycles) in which they can live out their fantasies. There, Zak looks for his magic wand. But on their second visit, they are challenged by boys from the local neighborhood who have claim on the property. At this point, Zak decides they need a third king, and Joel joins them on their adventures.

As Zak and Alan play in their fantasy world, Alan’s mother begins to take him to church. Before, they had only occasionally attended church. Now they start going to Art’s church. His mother is concerned about Alan’s interest in fantasy and magic and suggests that it goes against the Bible. Their pastor isn’t as concerned as Alan’s mother, but she takes away his Harry Potter books as punishment for him riding over the bridge to their magic kingdom.

The book ends as Alan, Zak, Joel along with others including several girls, move into Middle School.  Alan notices the changes as he is more interested in the girls and less in the fantasy worlds that he and Zak had created. Alan is also more interested in sports and in reading the Bible, which seems to have become his new “magic book.” And construction has begun on the land upon which they’d envisioned their magic kingdom.

I found myself curious about Alan as he navigates his changing world. His challenges kept me engaged. At first I found myself not liking the pastor (who told Alan the only book he read when he was a kid was the Bible). I didn’t find that believable.  But I later liked him when he refused to tell Alan’s misdeeds to his mother, allowing Alan to take responsibility and to work it out himself.

This book could benefit a young boy troubled about his changing world (we’ve all been there, especially in those pre-teen years). The book could also help a boy with parents (or a friend’s parents) with drinking problems.  The story shows the benefits of a religious community and organizations like Alcoholics Anonymous to help address such problems. However, I found myself concerned with seeing the Bible as a substitute for “magic books.” In this way, I agreed more with the pastor, who didn’t appear overly concerned about the magic books. I found myself wondering more why Alan’s mother was so concern. Adding to the confusion was Zak trying to be a good friend to Alan and giving him a copy of C. S. Lewis’ “magic books,” The Lion, Witch and Wardrobe.  Lewis’ use of the fantasy genre as an allegorical way to understand Christianity is well known, and the gift shows that although Zak doesn’t get Alan’s interest in Christianity, he is supportive of his friend’s interests.

As for the Bible being some kind of magic book, I would hope that Alan would come to understand the purpose of Scripture is revelation. By showing us who God is and who we’re to be, the Bible helps bring us into a relationship with God. Maybe Alan’s new found interest in the Bible will help him appreciate it not just as a book with better magic or fantasy, but as a guide to a relationship with (to draw from AA language) a higher power.

I am curious as to how middle school boys might relate to this book.  While those of us who lived through the terrorist attacks of 2001 understand the fear and uncertainty expressed by Alan and Zak, I wonder if this would be the same for those who were born a decade later (Alan and Zak would be in their late-20s today). If Arkins was to do a second publication, I suggest he consider how that event might be perceived differently by younger populations.  The other issues that Alan face (a single parent with alcohol issues, fidelity to old friends while making new ones, and relationships with the opposite sex) are more universal than the 911 experiences.

The Magic Kings is easy to read.  Arkins is an excellent storyteller and his style maintains the interests of the reader.  I look forward to reading more books from him.

Disclaimer:  I am in a writing group with Brennen Arkins and was given a copy of the book for review.