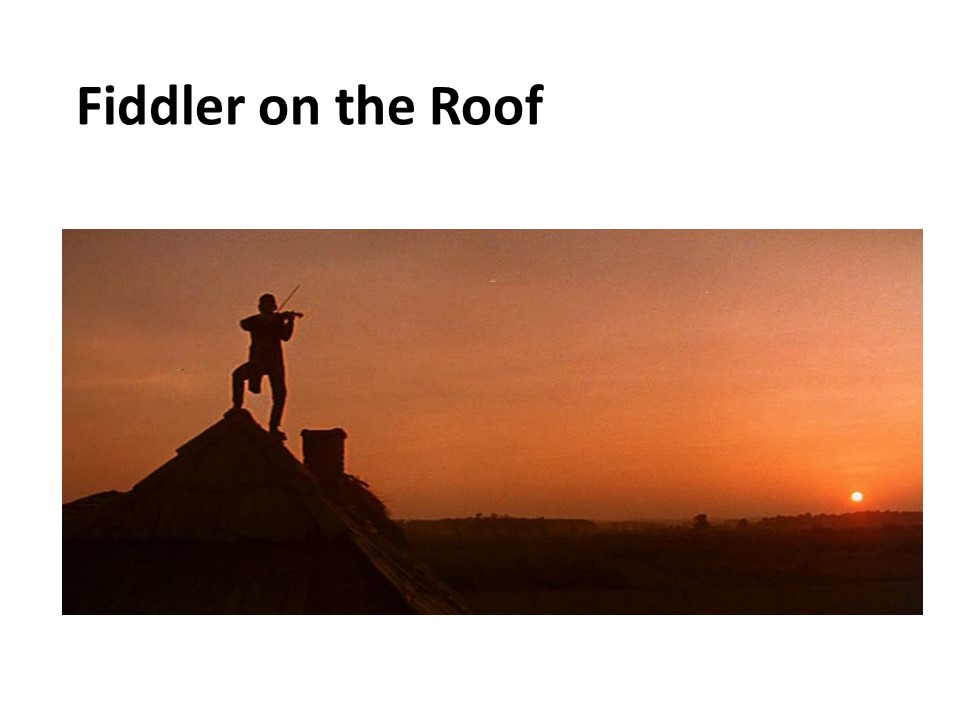 I’m sure many of you have seen the movie Fiddler on the Roof. It’s about a poor Russian Jewish milkman named Tevye, who has an incredible voice. His family consists of a worried wife and five daughters.  If I remember correctly, the movie opens with a comical fiddler, straddling the ridge of a roof, playing in the Sabbath at sunset. Tevye looks up to the roof and asks the audience, “And how do we keep our balance on the roof?  One word – tradition.” From this, he launches into a song about tradition, after which Tevye provides the audience a confidential piece of wisdom. “Because of tradition, every one of us knows who He is (pointing to God), and of what God expects of us.”

Our faith is steeped in tradition. At times, tradition has taken a bum rap, some of it justified for we don’t worship tradition. But there are critical points to our faith that we must understand and accept or we’re not Christian. One of these non-negotiable items that tradition reminds us is that God provides a way out of our troubles and back into his family.

As you know, we’re in the season of Lent. This is a season of reflection on our mortality, our sinfulness, and our need for a savior. Or think of it this way… The season of Lent is a time for us to realize that we all have a bar tab we can’t pay.  And God picks up the tab! 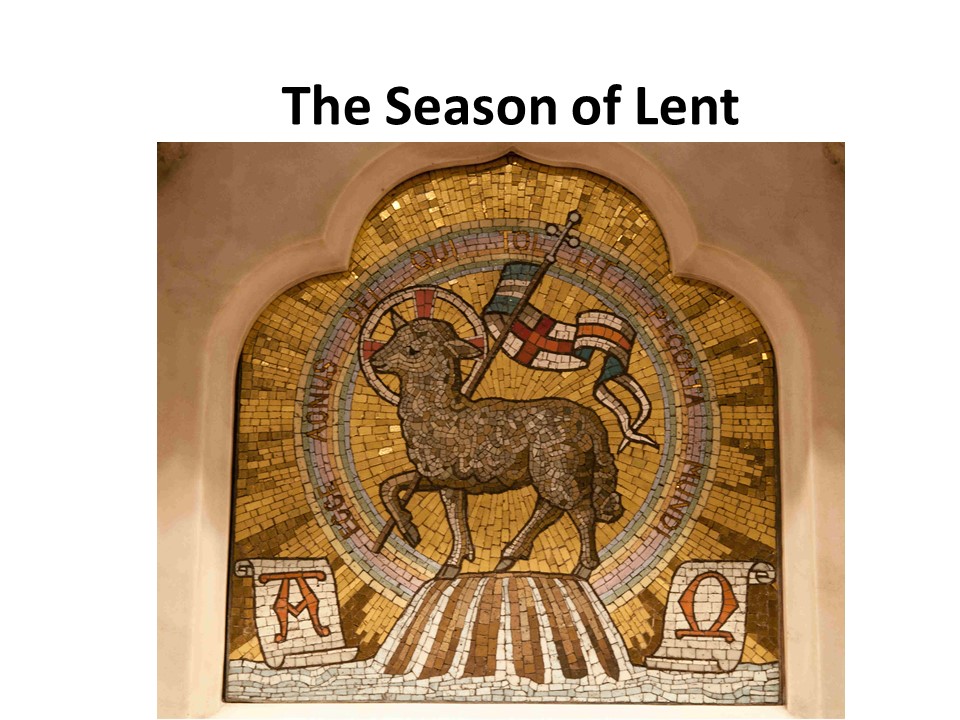 This Season of Lent, I am focusing on a traditional image found throughout the Scriptures, the sacrificial lamb. We can find the roots for this concept in the Old Testament, back even into the early chapters of Genesis.[1] John the Baptist identified Jesus as the “lamb of God” and in the book of Revelation, Jesus is revealed as the victorious lamb.[2] Living where we do, lambs aren’t often observed outside the meat counters in the grocery store, but they were quite common in Bible times and in many more rural places still today.[3]

Abraham, Isaac, Jacob, Moses, and King David were all shepherds. Jesus refers to us as sheep when he tells Peter to feed his lambs and he presents himself as the Good Shepherd who goes after the lost sheep, building upon the idea in Psalm 23, of God as the Good Shepherd.[4] And during Holy Week, which comes at the end of Lent, we see that Jesus offers his life willingly, as a lamb, for our sins. But what does all this mean for us? We’ll examine this over the next six weeks.

Today, let’s go back into the Old Testament story of the 10th Plague and the Passover, as we begin our journey through the Biblical pastures where lambs graze and contemplate their sacrifice upon the altar. Tradition, as Teyve said, holds us up. The Passover, a central event for our Jewish friends, ties in with Jesus’ suffering and death. These traditions remind us that we have a loving God that will go great distances to redeem us from bondage. Read Exodus 12:21-32.

The tenth plague does it.  Of the first nine, many of the plagues were like jokes: gnats everywhere (something we experience here on every nice day), frogs jumping around, and flies abounding.[5] These are all a nuisance, but what harm do they really cause? But here, in the 10th Plague, we see God not only as the Gentle Shepherd as described in Psalm 23, but a divine destroyer—a God of judgment and vengeance.[6] In our understanding of God, it’s important to remember that the Almighty is beyond our control. As Hannah, the mother of Samuel, proclaimed, “There is no Holy One like the Lord.” She goes on to point out that God breaks the bows of the mighty and grids the feeble with strength, and that the Lord kills and brings to life.[7] We can’t control God, for he already has things under his control. It’s a frightful thing to consider God’s judgment. Before it, we can only pray for mercy. But if God didn’t have such power, what good would God be to us?

At midnight it struck. The first-born in Egypt die. This includes the oldest child of Pharaoh, the man who rules over the Nile and was viewed as a god by his people. Pharaoh’s predecessor played god when he tried to kill all the Hebrew baby boys. Now the tables turn. Pharaoh awakes to death within his palace and the cries across his kingdom. All Egyptians experience sorry and pain. Not even the prisoner in the dungeon is spared. Those from all walks of life—from all occupations and social economic levels—suffer. To our mind, this doesn’t seem fair! Couldn’t the Hebrew freedom been accomplished with less death? Perhaps just the death of the brutal taskmasters, sparing their offspring? Why does someone locked up in the dungeon, someone who had nothing to do with Hebrew slavery, suffer?

We’re not given any answers here to the suffering question. Just as the Scriptures doesn’t tell us why Israel had to toil for 430 years as slaves in Egypt, we’re given no answer as to why the plague strikes those not guilty including livestock. We don’t comprehend why the first-born of the least of the Egyptians die, or even why in the third plague, the clueless frogs came up out of the Nile only to croak (in a figurative and literal sense). Instead of addressing the problem of suffering, the events of the plagues, especially the events on the night of the Passover remind us (as well as those in the story), that all life belongs to God. But even more deeply, this story reminds us of the cost of freedom.

For those of us who worship Christ, this should be of no surprise. The cross, like the events of the Passover, involves suffering. Whether we are enslaved by an Egyptian taskmaster or the burdens of our sin, our freedom from bondage is costly and to be cherished.

The Passover event, for the Hebrew people, could be compared to our Independence Day. We celebrate what happened on July 4th, 1776, but if we remember our history, it took another seven years of war for our nation to be free from Britain, and it would be another eight decades before there would be a movement to live into the document’s bold claim that “all men are created equal.” For the Hebrew people, there will be 40 years of forging a nation in the desert with many challenges ahead. But this is where their freedom begins. On the night of Passover, a vengeful God remembered his people and gave them a way to escape the angel of death that had descended upon Egypt.

As followers of Christ, we acknowledge the cost of freedom. Our freedom from sin and death did not come easily, as the Hebrews experienced and as we understand in the death of Jesus Christ. We must acknowledge the cries along the Nile this particular night as well as the cries from 1000s of other battles and gives thanks for the freedom we have enjoyed.  Furthermore, as we see in the Hebrew Scriptures, that while such freedom is costly, God is the one who picks up the tab!  God provides the Hebrew people in Egypt a way out. 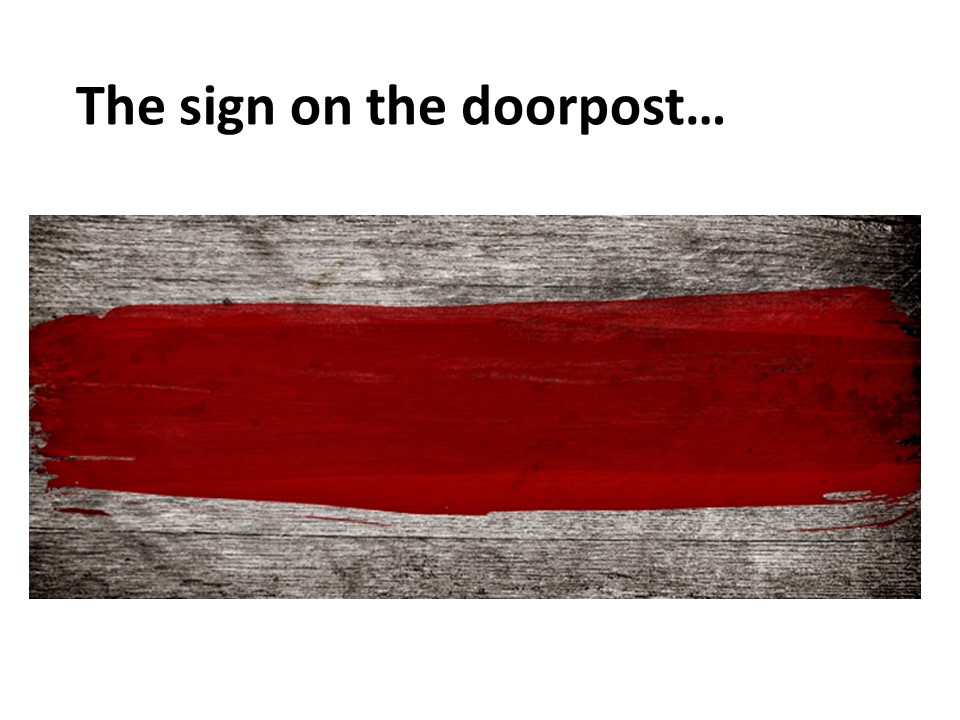 I wonder what went through Israel’s collective mind that evening as they participated in this bizarre ritual—putting the blood of sheep on their doorpost, hurriedly eating roasted lamb as they huddled indoors listening to the cries of the Egyptians piercing the air. While they longed for freedom, I am sure many were emotionally moved by the suffering around them. Before the night was over, Pharaoh calls on Moses and Aaron and tells them to take the people of Israel out of Egypt.  Pharaoh even acknowledges the supremacy of Israel’s God, asking for a blessing for himself.  And so the Hebrew people are free to go, to escape the bondage of slavery. But they must remember that God is the one who provided them their freedom, and that is why they reenact the Passover, year after year, something they’ve been doing for over 3500 years. That’s a long time to thank God for picking up the tab, but grace should make us eternally grateful. 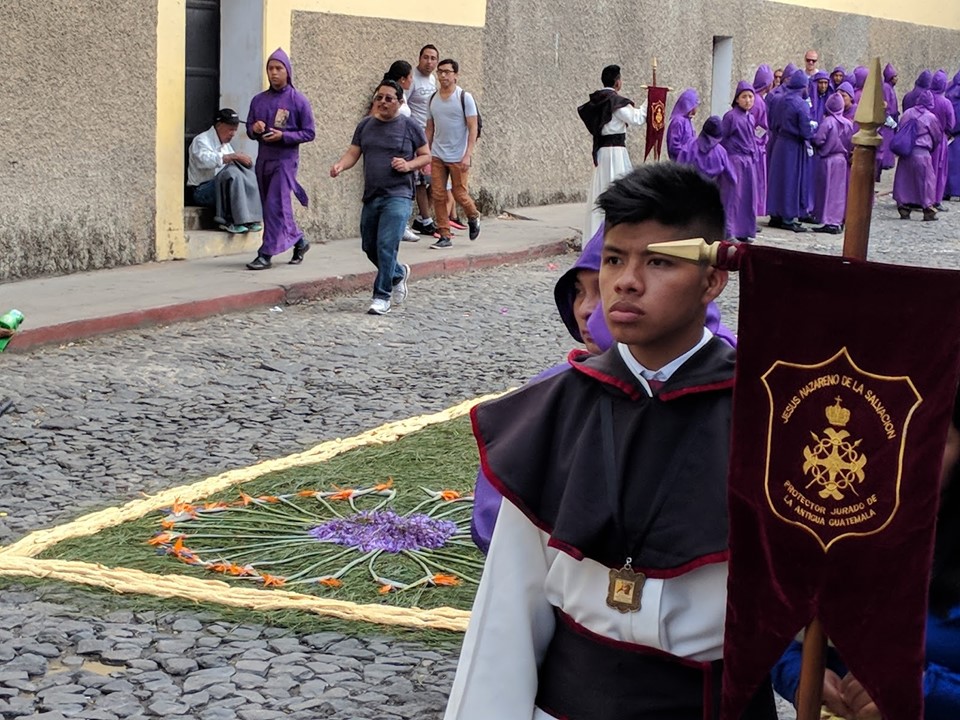 As you know, last week I was in Antigua, Guatemala.  One of the traditions they have there is that on each Sunday during Lent, there is a procession from a church outside of the city to the site of the old cathedral by the city’s main square. These processions involve 100s of purple-clad men taking turn shouldering massive floats that weigh up to 2,000 pounds (it takes about 40 men just to hold up one of the floats).  They come into town on streets decorated with painted sawdust and flowers, followed by a band playing mournful tunes.  When it is over, all is cleaned up.  By doing this tradition over and over, just as the Jews observe the Passover and we observed Holy Communion, we are reminded of how much God has done for us. We’re reminded that in Jesus Christ, God has picked up the tab. 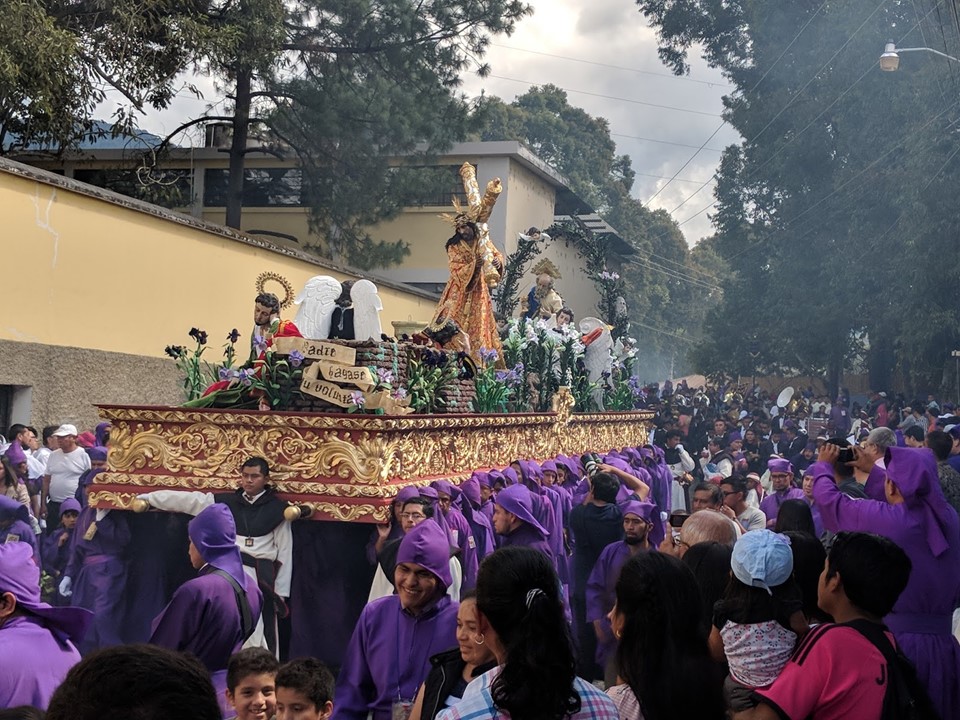 God desires to free his people from their bondage to sin and death and to allow us a new life in Jesus Christ. God redeemed the Hebrew families from their bondage in Egypt. Through the salvific work of Jesus Christ, God frees us from our bondage to sin. Our God is a God of grace. Our God is a God who picks up the tab. Rejoice and be thankful. As a God of grace, we not called to earn our freedom, but to respond with a grace-filled life. We hold to the traditions, not because they have magic powers, but because they point to a greater truth found in the Almighty. They remind us who God is and to whom we belong.  When we understand to whom we belong, we will live gracious and generous lives. Amen.

[6] For a discussion of God as “Divine Destroyer” in Exodus, see Donald E. Gowan, Theology in Exodus (Louisville: Westminster, 1994), Chapter 6.