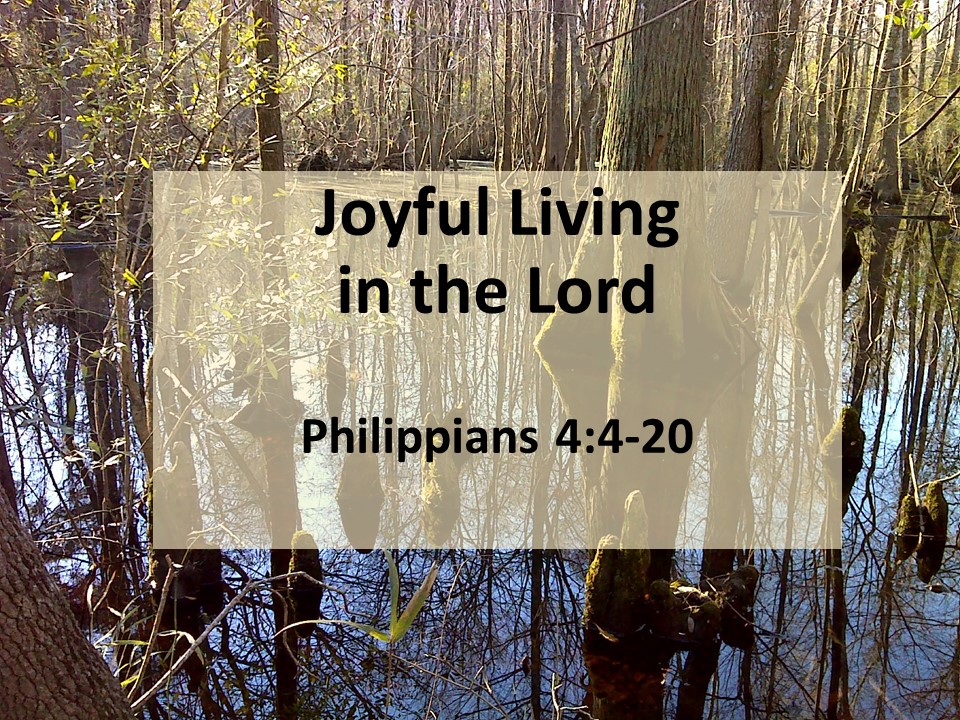 As a Boy Scout, I loved a good game of Capture the Flag. We often camped in Holly Shelter Swamp on the banks of the Northeast Cape Fear River. There would be two teams, the battle of the snakes. Cobra Patrol verses the Rattlesnake Patrol was a Cobra. We’d start the game as the light was fading from the sky and it’d continue till well after it was dark. The objective was to capture the other team’s flag and bring it back across the center line without getting caught.  If you were caught (or tagged) on the enemy side, you were sent to a “prison” where you were held until the end of the game or until you were freed by being tagged by one of your teammates. 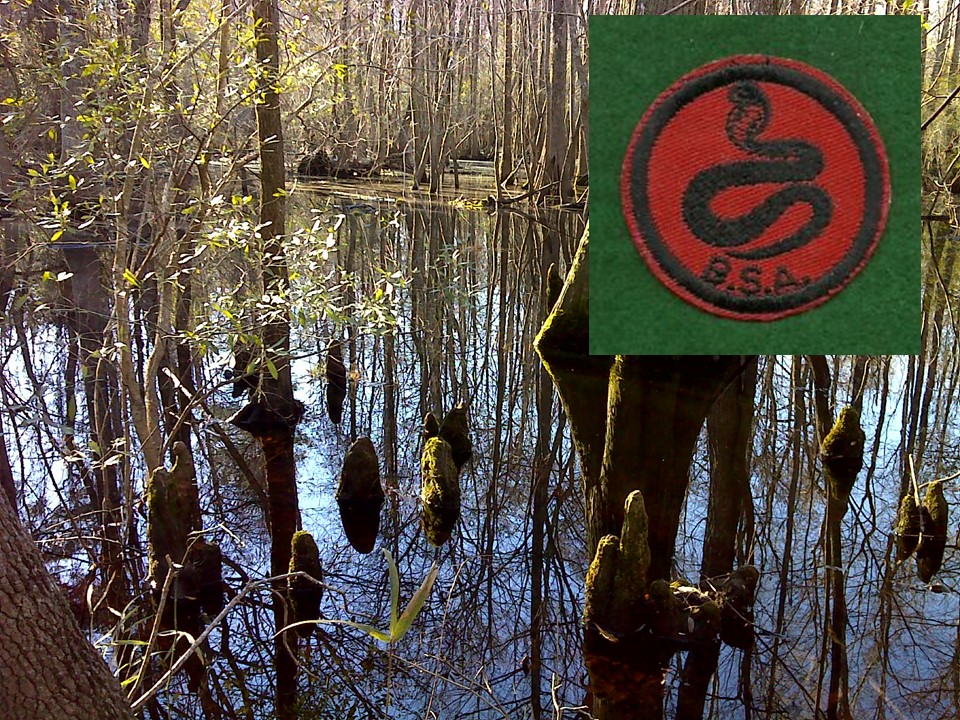 We played out this battle in a large parking lot for a wildlife ramp on the river.  As we generally camped there in winter, there’d be few or no vehicles parked there, especially not at night, so the lot made an ideal set-up for the game.  On one side was the river, two sides were swamp, and behind us was the bluff where we camped. During my first campout, as one of the young kids who didn’t know what was going on, I and several others were quickly caught and placed in prison. It wasn’t fun sitting there. There was nothing to do but wait and complain. I know a bit of how Paul felt in prison, although I can’t imagine how it must feel to be there day after day, week after week… In prison, you’re at the mercy of others. You can’t participate in what’s going on. There is a restlessness that grows inside of you. 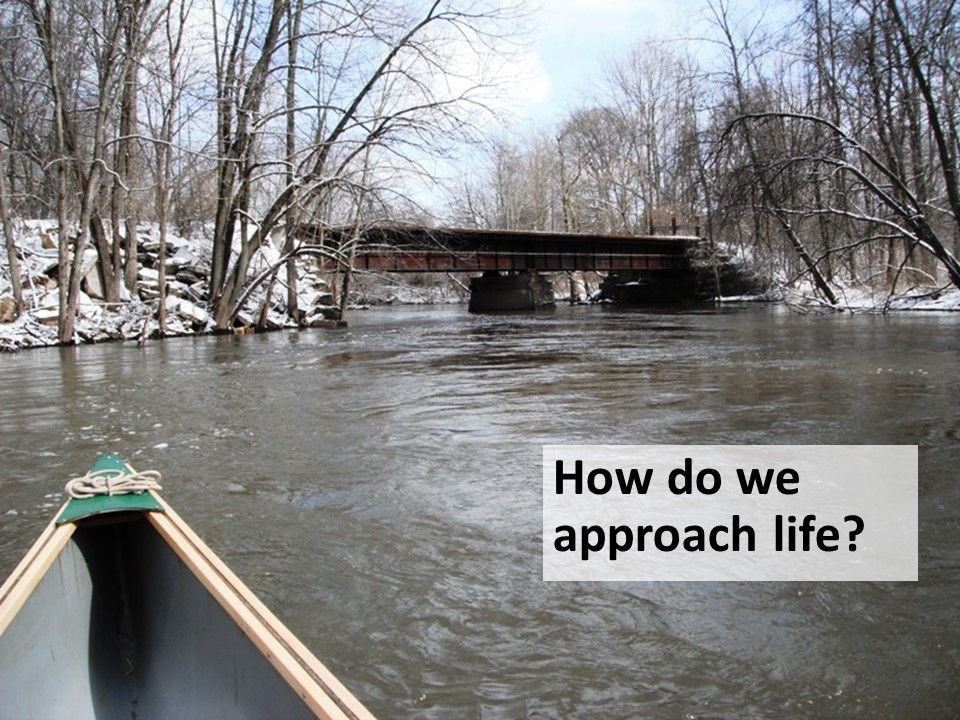 We’re finishing our look in Philippians today. Here, Paul offers some good advice for how we’re to live as Christians.  A lot of it is about our attitude, how we approach life.  Are we optimistic?  Are we gracious?  Do we trust God?  Our attitude goes a long way toward how we live our lives. 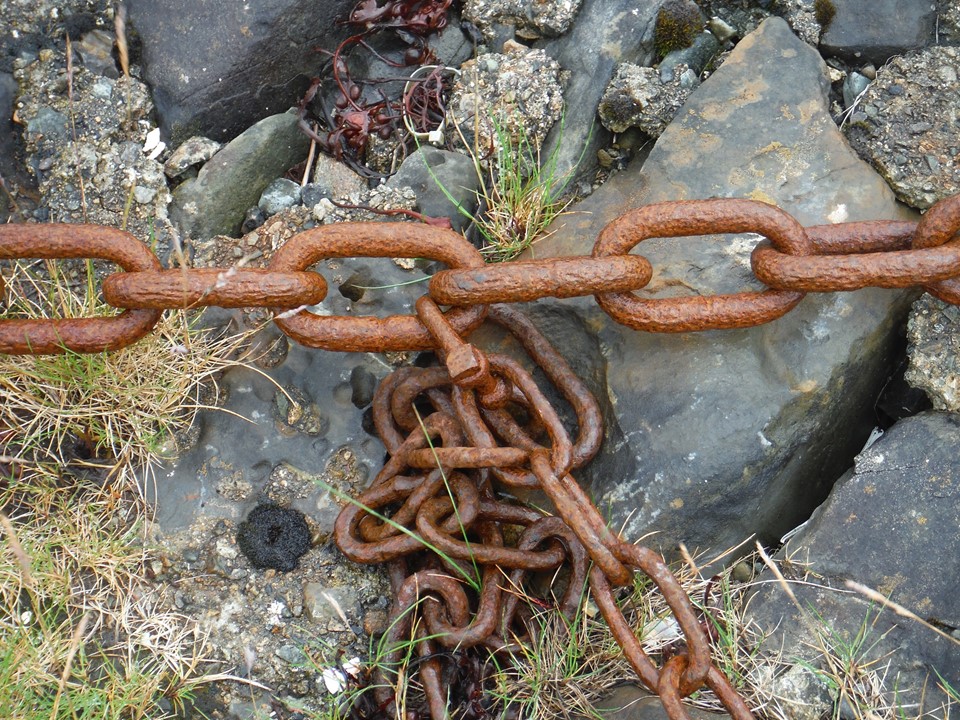 At the beginning of this letter, we learned that Paul’s circumstances are not ideal.  He’s writing from prison.[1] There is a guard checking on him regularly, making sure the cuffs are snug, the chains secured, and the door bolted. Guard duty for a soldier was the pits. Boring. Some of the guards would take out their displeasure of having pull this duty on the prisoners.

If you were to write a letter under these circumstances, what would you say?  How would you end your letter? I’m not so sure I could end my letter as Paul did, rejoicing in the Lord. Instead, I’d be begging for you to call a lawyer, to get me out, to raise my bail, or to slip a hacksaw blade in a cake and bring it to me… 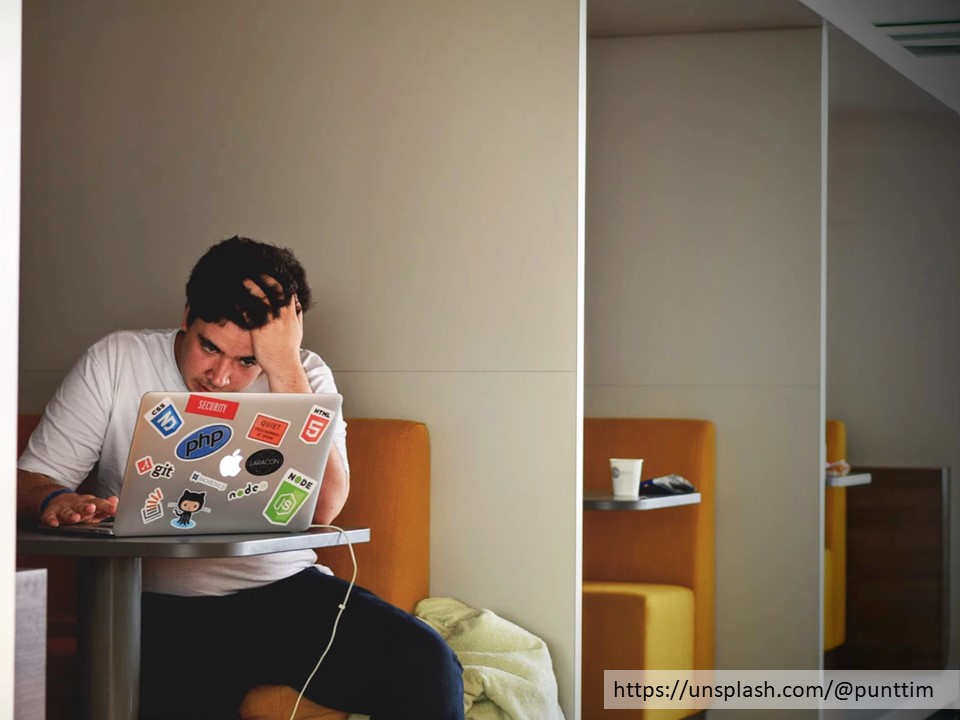 Paul is attempting to calm the Philippians who seem to be stressed out. There is some bickering within the church in Philippi as you’d see if you read the beginning of this chapter. Over all, this is normal stuff.  Someone is not happy about something, someone else is stressing out over something else…  It still happens in churches, today. Paul wants the Philippians and would advise us to take a deep breath and then to joyfully continue the work they and we are supposed to be doing…

I recently read a story in the New York Times about how the most popular class at Yale this past year is about happiness. Almost a quarter of the freshman class signed up for the course. The professor suggested the class’ appeal is because the students are under so much stress.[2]

When my daughter was in Middle School, about the same age as many of these Boy Scouts here, she had a class that focused on stress. Consequentially, this stressed her out. She even had homework, to write a paper about what stressed her out. I suggested she write about homework (it sure was stressor during my childhood). In this class the teacher called for a “stress-free day” in which they did nothing.  Not only did they not do anything, they were not allowed to do any other work such as homework for another class. Leaving the class at the end of the period, Caroline told the teacher that the “stress-free class” was the most stressful she’d ever experienced. That was the point. We don’t avoid stress by doing nothing and I think that’s one of the things we see from Paul in this letter. Keep doing the good work, keep rejoicing, and don’t let the circumstances get you down.  Even though things may be bad in Philippi, at least they’re better off than Paul, whose chains rattle as he writes to the congregations he loves so much. 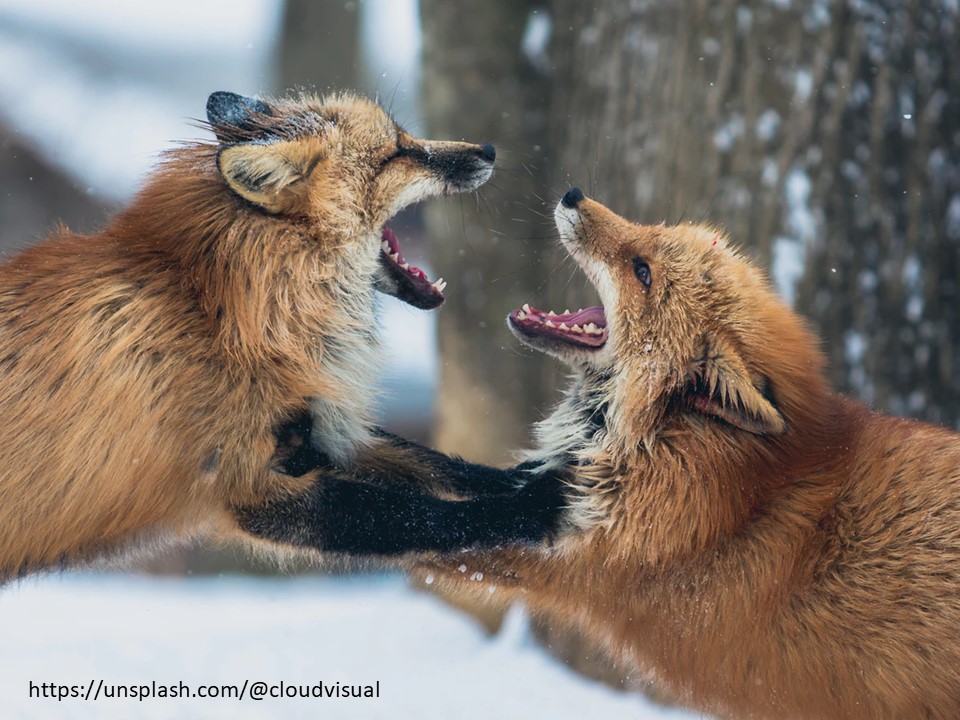 Paul begins this chapter, before our reading, mentioning several people who had been helpful in his ministry in Philippi. It seems they’re in a bit of a snit.  They’re fighting, their arguing, struggling to get alone and Paul tells the good folks of Philippi to step in and help out. They ought to be “of the same mind in the Lord.”  In other words, their focus needs not be on their internal struggles with one another, but on what God is doing in their community. When we focus on ourselves, we take things personally, but when we focus on the larger picture of what’s God’s doing in the world, there’s a lot all of us can get excited over.  We should want to be a part of it! 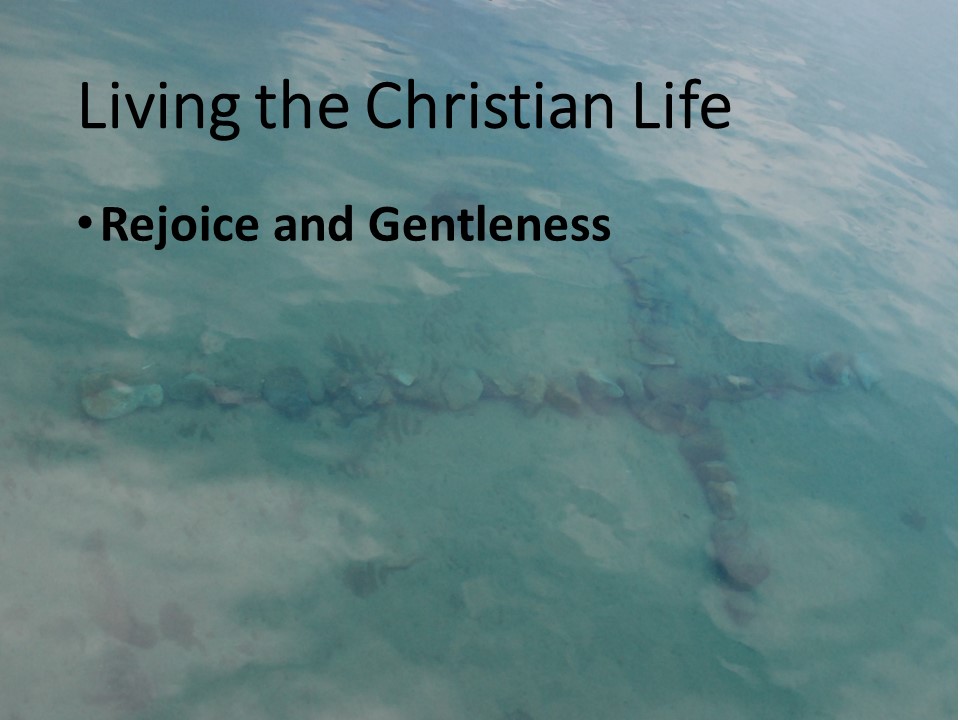 Paul provides the Philippians with a number of suggestions as to how they’re to live the Christian life.  First of all, they’re to rejoice in the Lord and as they do this, they’re to let their gentleness be known. You know, it’s hard to be praising God as you abuse others. Instead, if we lift up our hearts to God, we should also be led to deal gently with those around us, for we know from where our blessings come and to whom our future belongs. So take delight in God. Stand in awe of God’s wonderful creation, look to see God’s image in those around you, praise God in song and in prayer, with others and when you are alone. 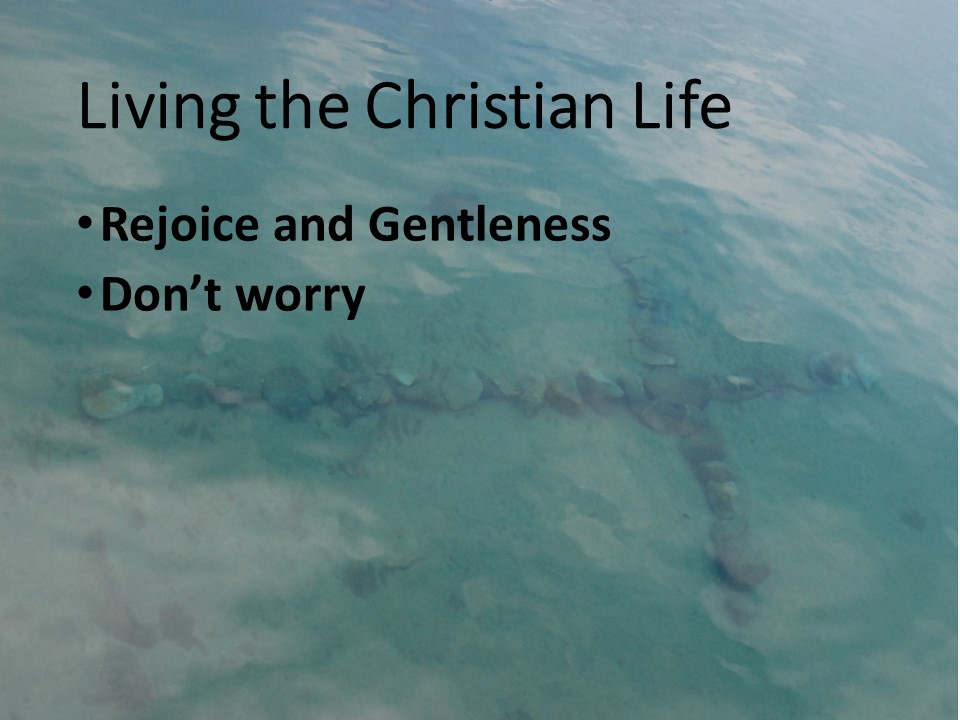 Next, they’re told not to worry. Good advice, but how?  The Philippians probably asked the same question, and then they thought about Paul and his tribulations. “If Paul ain’t worrying, why are we?”  Instead of worrying, Paul encourages his readers to take their needs to God, the one who holds the world in his hands. Of all people, those of us of faith should not worry, but we all do. As followers of Jesus, we should be bringing a calming approach to our society, but I don’t often see that. We should do better. 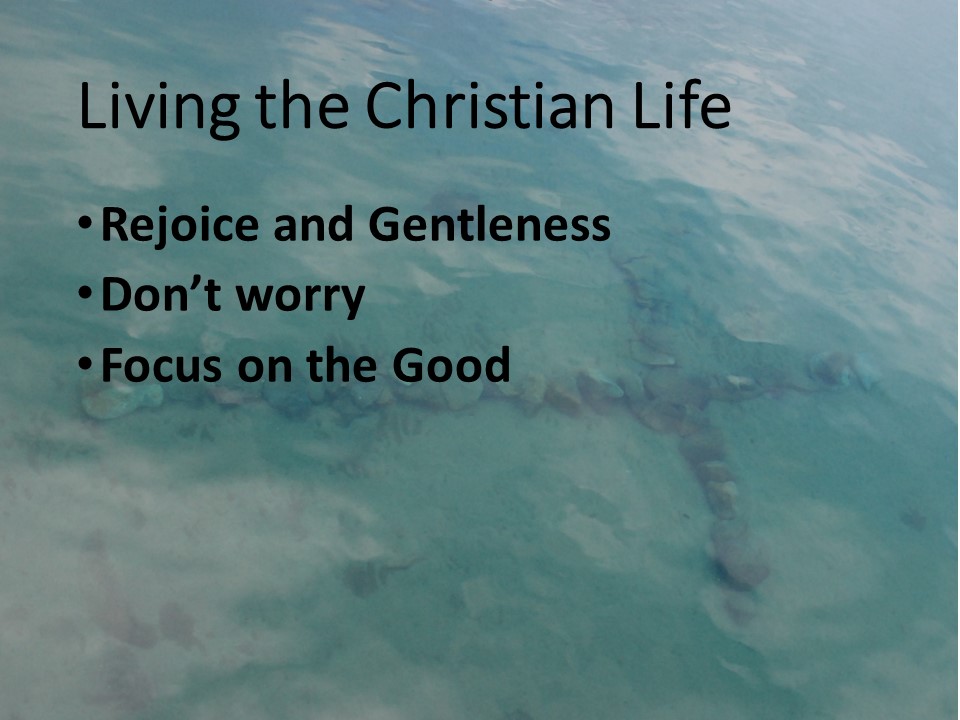 Paul goes on to say that the Philippians need to focus on that which is true, honorable, just, pure, pleasing, commendable, excellent and worthy. Verse eight is a beautiful verse. Paul knows that if those who are bickering focus on what’s important, things will work out. Problems arise. However, when we get sidetracked, what should be minor irritants grows and if left unchecked can become a full-fledge war. Too much of what we fight and argue over is trivial—whether it is in our relationships and family, in the church or in our community, in our nation or between nations. If we only could focus on that which is good and pure and honorable instead of trying to always be seen as right, we’d be better off. 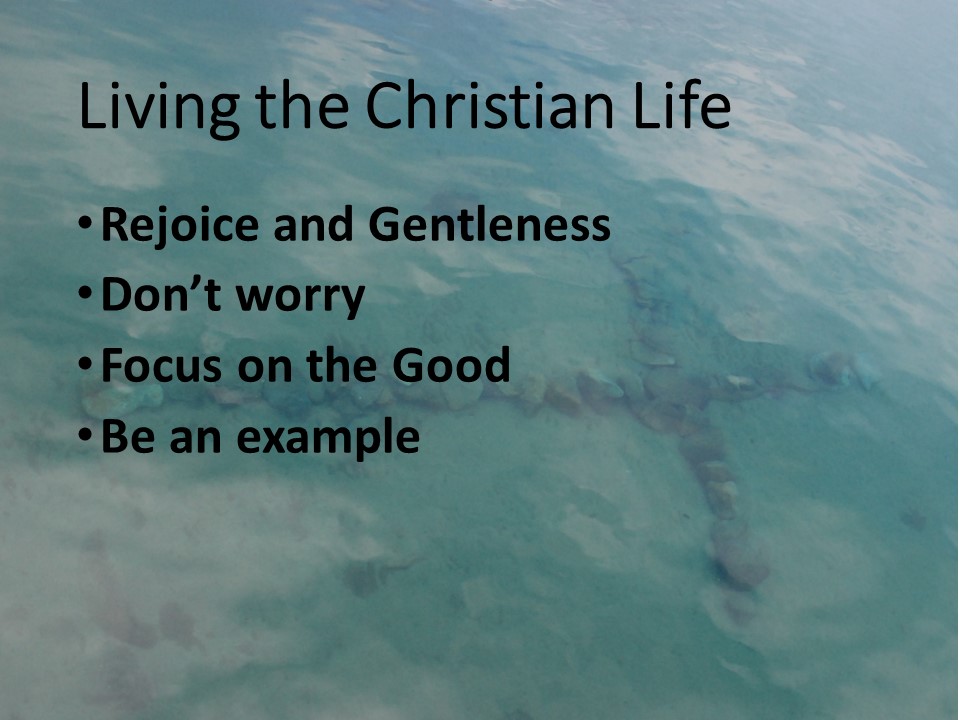 Finally, Paul lifts himself as an example. “Keep on doing those things you’ve learned from me, that which you’ve seen me doing,” he says. Again, Paul is writing this in chains and, by his demeanor, sets an example for the Philippians and for us. We can learn from Paul, just as we can be a model for others by the way that we handle our sufferings. Out Scouts know the importance of doing a good turn daily, and when they do such, they set the example for all.

Let me take you back to my prison experience while playing “Capture the Flag” along the Northeast Cape Fear River. Our patrol leader, a guy name Gerald, served as an example to me for what unselfish leadership is all about. In one of our early camping trips, he gave up his own dry tent to two of us who were wet when water rushed under our tent during a storm. That made an impression on me. 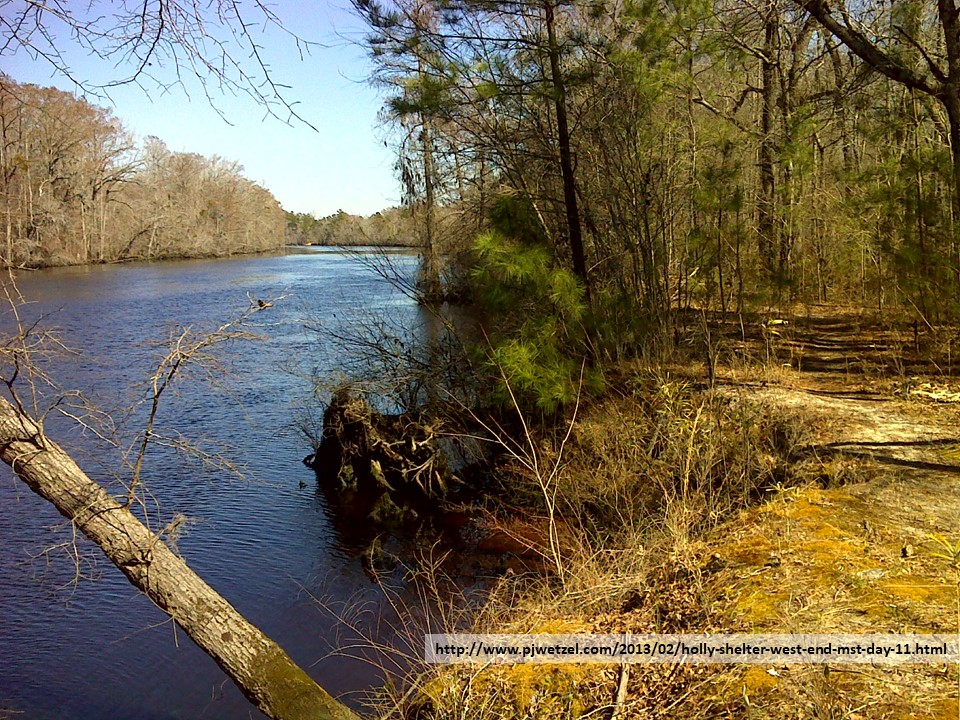 On this particular night Gerald decided to free us and make a dash for the flag.  I told you the dirt parking lot in which played was surrounded by swamp on two sizes and the river on the third. Gerald slipped the river and quietly made his way unseen down the river till he was behind the enemy’s lines, then he slipped into the swamp until he was right behind where we were in languishing prison. With the enemy guard looking to the front, thinking his back was secured by the swamp, Gerald slipped out of the swamp, tagged us, and told us to run. As the guard and others started chasing us as we headed to safety, Gerald grabbed our enemy’s flag and, headed toward our lines. He was caught right before he was able to make it over. Then it was our turn to free him from prison. I don’t remember who won that game. It seemed to go on for hours, but at some point it was over and there was a campfire and a night sleeping along the banks of the river.

From Paul, remember to rejoice, to be gentle with one another, to be a good example, and to trust in a God whose love for us has been shown in Jesus Christ. If God loves us that much, we’re in good hands. Despite the chains, Paul knows he’s been freed by Jesus Christ, which allows him to rejoice even while locked in a Roman jail.  If we can rejoice in his circumstances, so too can we.  Amen.