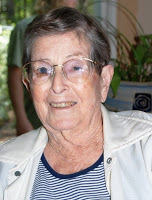 My grandmother was moved from her home of 70 years in 2008, to an assisted living facility near my Uncle’s near Hickory NC.  In 2009, I was back visiting in NC and my Uncle brought my grandmother back to her home for a week. My daughter and I came down to visit her. It was a wonderful time and I could tell my grandma was excited being back in her own home. My grandmother’s house has also been a welcome retreat for me and for many others, for she has always been a gracious host. This was a post from a former blog written at that time. The poem, I realized, goes well with the passage for the sermon I’m working on based on Psalm 1 (where the Psalmist encourages his readers not to sit in the seat of scoffers). To read more about my grandmother, click here.

My grandmother came back home looking for a book of poetry. Finding the book, she was upset that it didn’t have the poem for which she was looking. She told me about making a booklet of poems when she was in the seventh grade. The assignment was to copy poems they liked and to draw pictures to illustrate them. The two poems she remembered are Joyce Kilmer’s “Trees” and one titled “The House Beside the Road.” She illustrated the first with a tree, the second with a house. Grandma asked if I knew the poem, but I didn’t. Then I got an idea. Pulling out my Blackberry, I googled the poem. I came up with a poem by Scarlett Treat and read it to my Grandmother. She didn’t think that was the one because it was sad and about a house falling down. The poem she remembered talked about how to live a life. With some further checking, I learned that Ms. Treat was born while my father was in elementary school, making it highly unlikely my grandmother was reading her poetry in the seventh grade. So I did some more googling and came up with the poem, “The House by the Side of the Road” by Sam Walter Foss (1858-1911). As I read aloud, my grandmother smiled and said, “Yes, that’s it.” She was also excited but couldn’t understand how I was able to find it on my cell phone…

In many ways, this poem describes my grandmother, who has sought to be a friend to all. Here is the poem:

The House by the Side of the Road