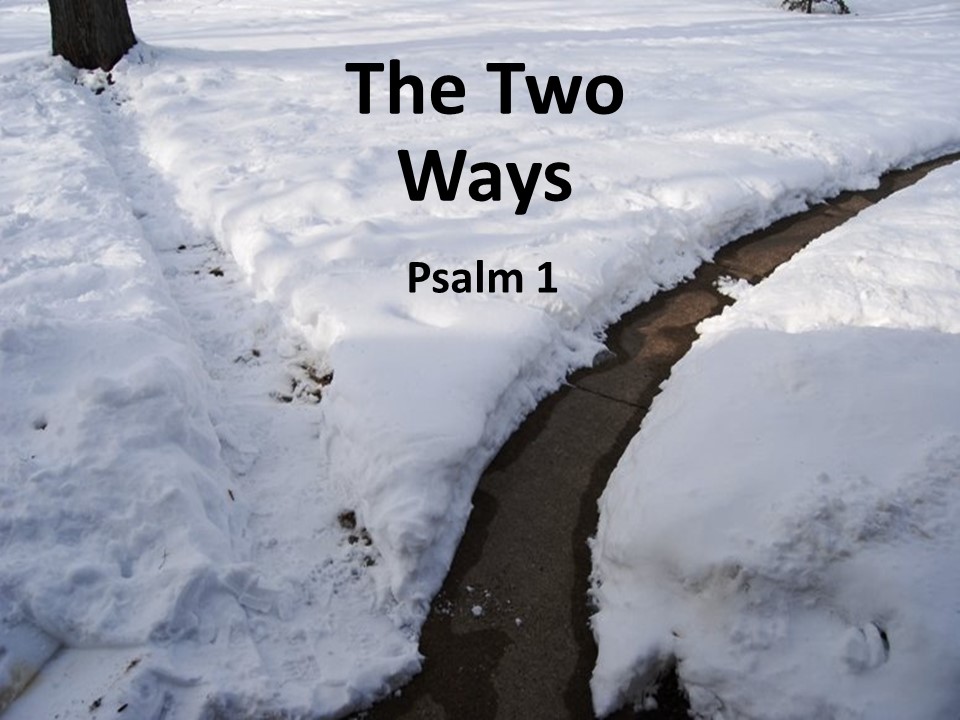 Front of the house in Michigan. Interpret as you will, two paths, one four our four legged friend and the other to the driveway…

We’re exploring the very first Psalm today. Before we get to the Scripture, I want talk a bit about Psalms.

Whenever I’ve preached from the Psalms, I’ve tried to impress upon you that the book was a hymnal and worship resource for the Hebrew people. When you read the Psalms, you may have notice many of them have Hebrews words like Selah written in the margins. It’s thought that this was an instruction for the musicians, maybe the point when a cymbal would clap or the tempo increased. We don’t know exactly what it means, but that’s the best guess of scholars. Many of the Psalms indicate worship, calling us to come into God’s presence, to sing God’s praise.[1] 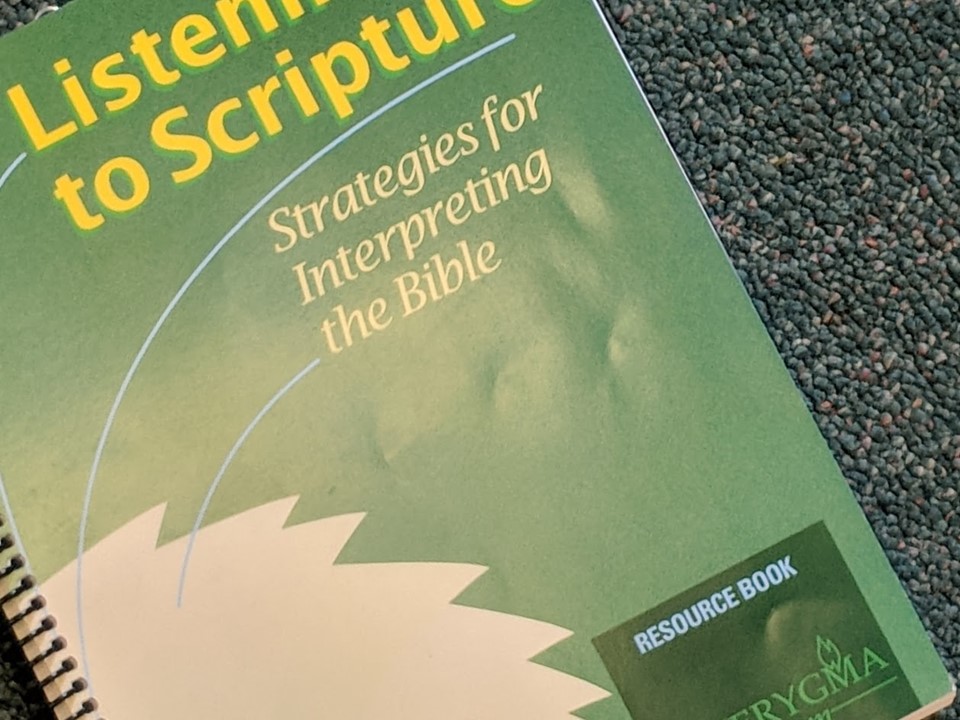 I’ve been teaching a class on reading and understanding scripture for the past month. For those of you in the class, you’ll recall how we have to consider the historical setting for a text, along with its form and structure. We see the importance of this when looking at the Psalms and especially this particular one.

Those who study the Hebrew Scriptures generally date the coming together of this Psalms, and much of the Old Testament, to the Babylonian period. It was a time when the Hebrew people were in exile. During that era, away from the Promised Land, the now ruined temple and the holy city of Jerusalem, the Jewish people collected their writings as a way to preserve their religious heritage. Text that had been passed on orally were written down. Other texts, like the Psalms, which existed as fragments, were collected and put together into books. Individually, many of the Psalms themselves are much older, some attributed to David and to earlier era of Israel’s history. We can image that the collection of the Psalms was much like the publishing of a hymnal today. A group of people gathers and decides on the hymns used and their placement in the hymnal, and then sends a rough draft off to the printer. Same thing happened then, only they didn’t have a printer and had to send a copy to scribes who copied it by hand. 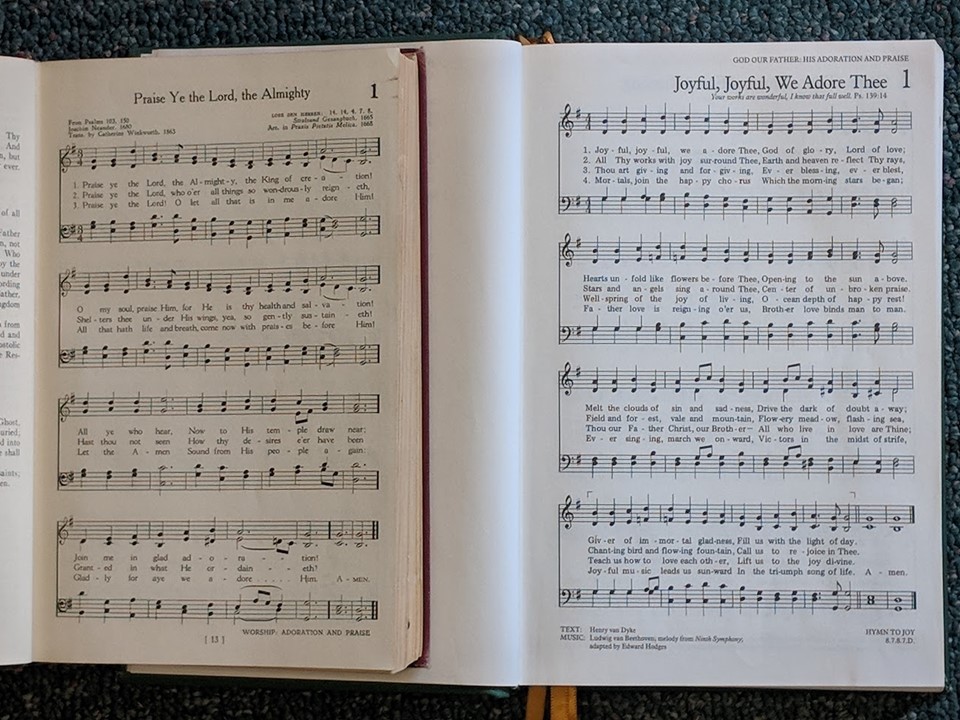 Let’s consider a few hymnals. I grew up with the Red Hymnal—it was published by the Presbyterian Church a few years before my birth and was the main hymnal in use for over 35 years.[2] The first hymn in this hymnal is “Praise Ye the Lord, the Almighty.” Do you think this hymn was chosen randomly? I don’t think so. It’s a fitting hymn for Presbyterians, the focus being on God Almighty and not on ourselves. Our own hymnal, the first selection is “Joyful, Joyful, We Adore Thee.” Again, is was it picked randomly? I don’t think so, for it calls us into worship with a joyful heart. In the same way, when the collection of Psalms were compiled, there was an intentional decision, as they were led by God’s Spirit, to place what we know as Psalm 1 at the beginning of the collection.[3]

This Psalm was picked to remind the Hebrew people, and us, that if our prayers and songs are to mean anything, our lives must reflect God’s will. Ponder what it says as we listen to God’s word.  READ PSALM 1. 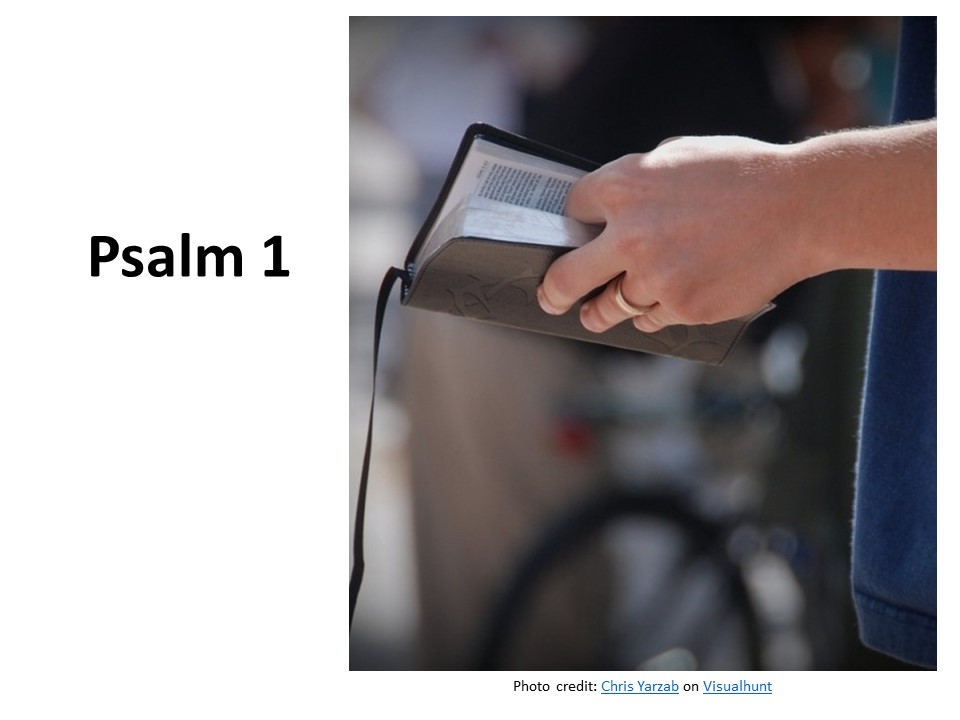 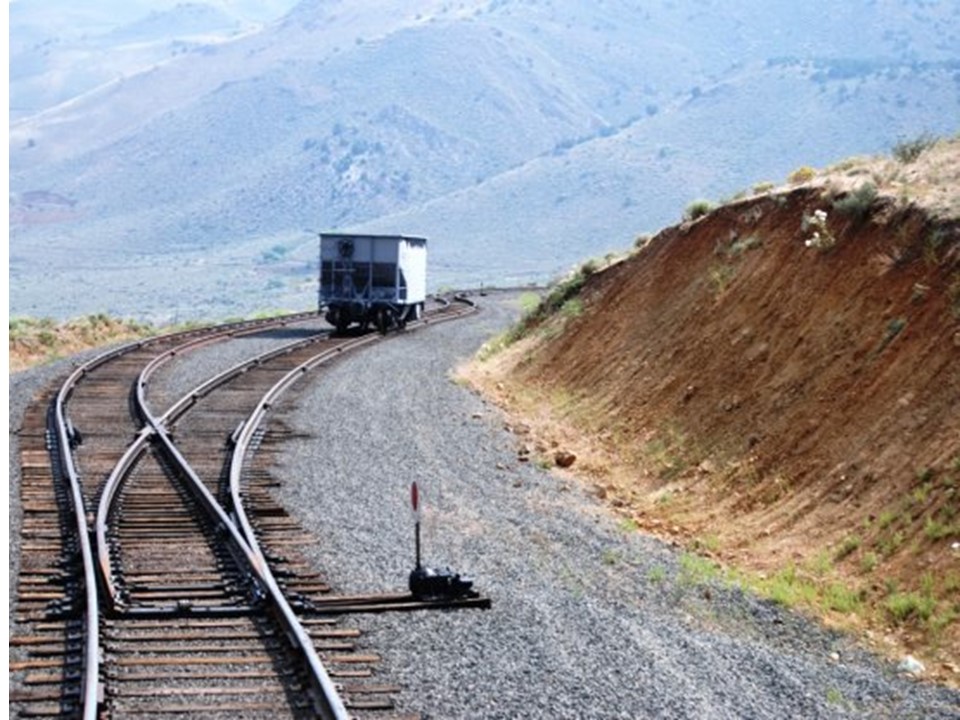 “Two roads diverged in a yellow wood,” the poet Robert Frost wrote in his famous poem first published in 1916.[4]  Likewise, according to the Psalmist, there are two options for those of us who believe in the God of Abraham, the God and Father of our Lord Jesus Christ. We can be on God’s side, rewarded by the one who gives life. Or we can take the road of the scoffers, the path that allows us to think we or something else is god, the path that will lead us away from the Almighty, the path to destruction. Two ways: God’s way which leads to life and the other road to death.  Two ways, the choice is ours. Which one will it be? 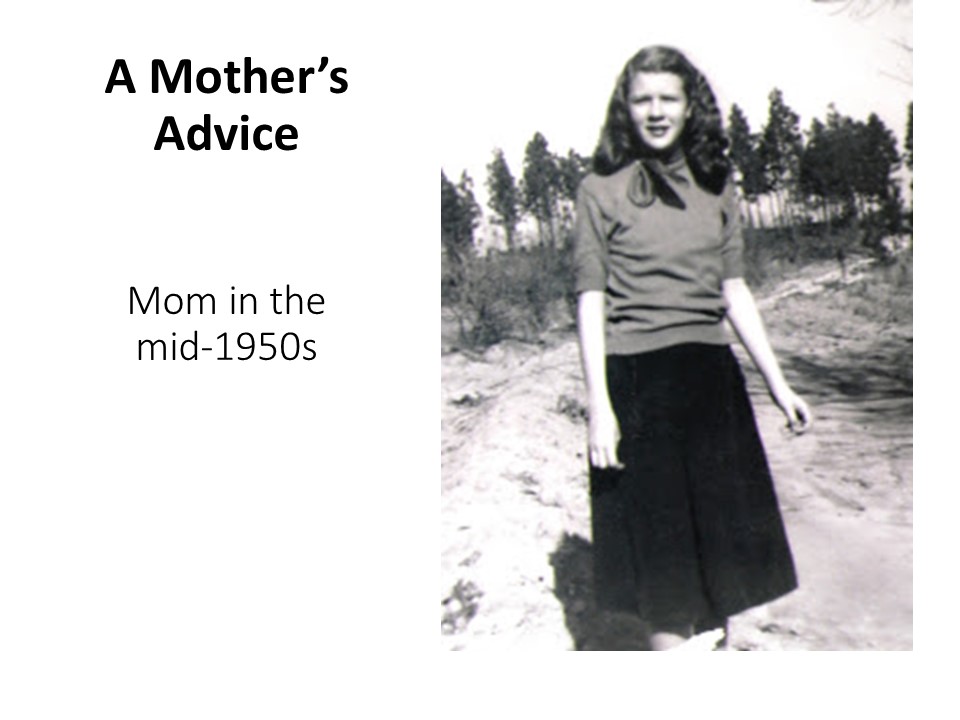 You know, today is Mother’s Day and this psalm could have been written by my mother (and, I’m sure, by many of your mothers). Mothers worry about their children following the right path, and there is probably nothing more tragic than a mother dealing with the disappointment of a wayward child.[5] 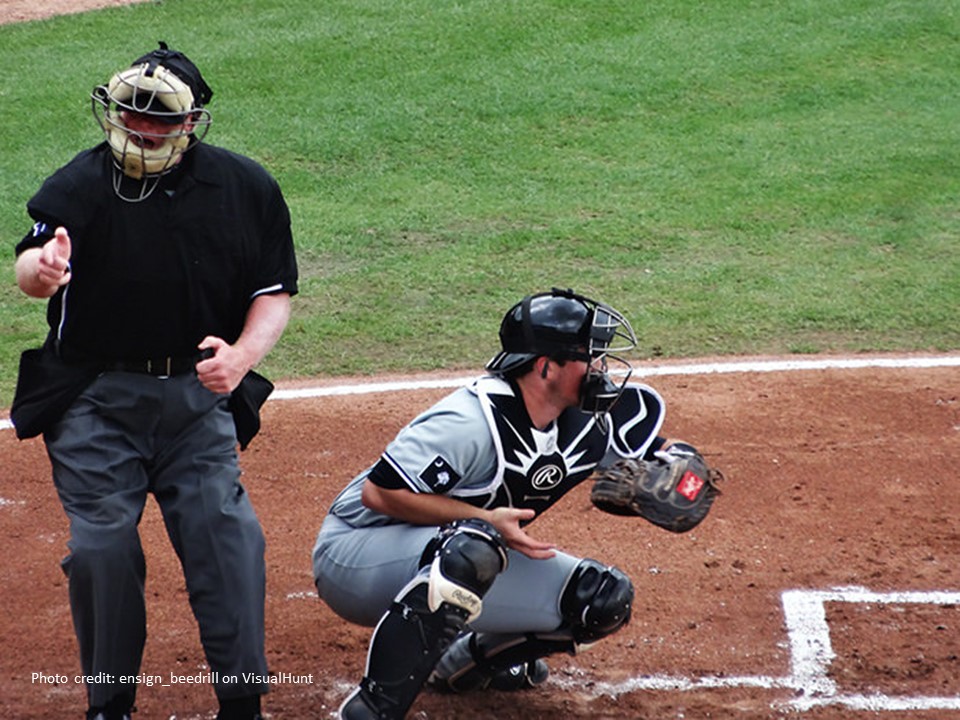 Our psalm opens with a beatitude, promising us that if we’re good and on God’s side, we’ll be blessed and have a happy life. But the opening line also reminds us of competing claims within the world. Happiness comes from not accepting the advice of the wicked. Their guidance run counter to God’s word. The first verse makes it abundantly clear to the reader that we should we should avoid such people…  Accept their advice? Strike one. Follow their paths? Strike two. And sit in their assemblies? Three strikes; you’re out. Instead, after making three negative suggestions, the Psalm reminds us that we’re to delight and mediate on God’s law. 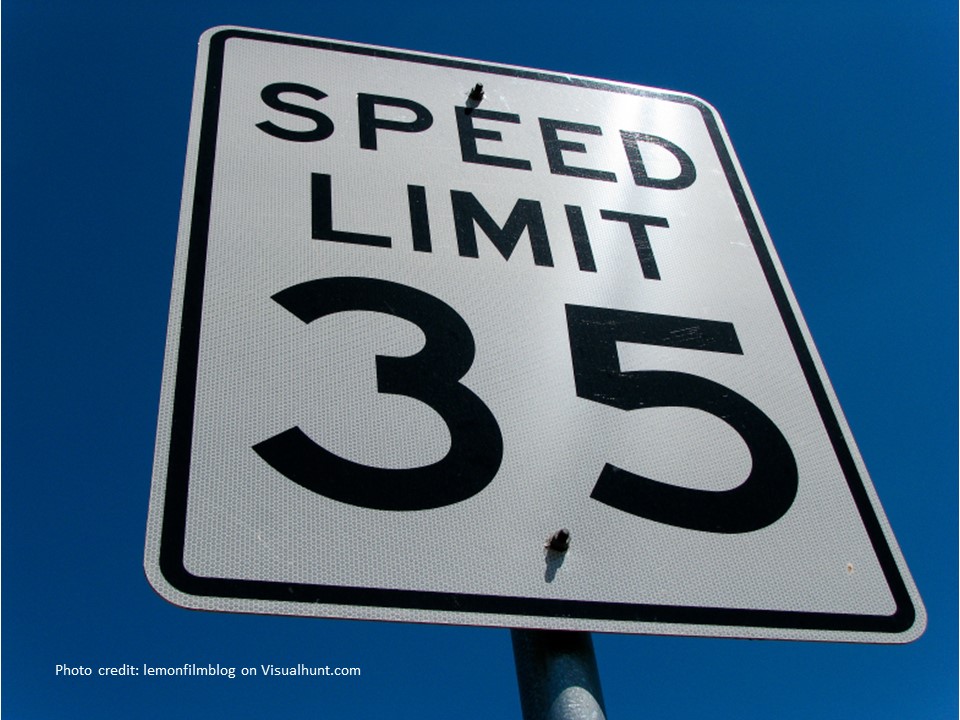 The idea of delighting in laws is foreign for most of us. I mean, we’re running late and the speed limit is only 35 miles per hour, as it is on Landings Way South. We curse the car in front of us that’s maintaining the legal speed. We see laws as being burdensome; they hold us back, or so it seems. Of course, if we live on that street and have a child who plays in the front yard, we understand and don’t want anyone to drive by at 60 miles an hour. If we put ourselves in such a place, we see the rational of the law. We have to admit that most laws are for our benefit or for the benefit of society. Of course, I still can’t see the reason some states outlaw barefoot driving.

God’s law, like most laws of the state, provides a boundary within which we can live life abundantly. Within these guidelines, life flourishes. Outside them, life diminishes. If we understand the law this way, we should take delight in it. We should learn and take to heart God’s instructions on how to live abundantly and to relate to one another and to Almighty faithfully. 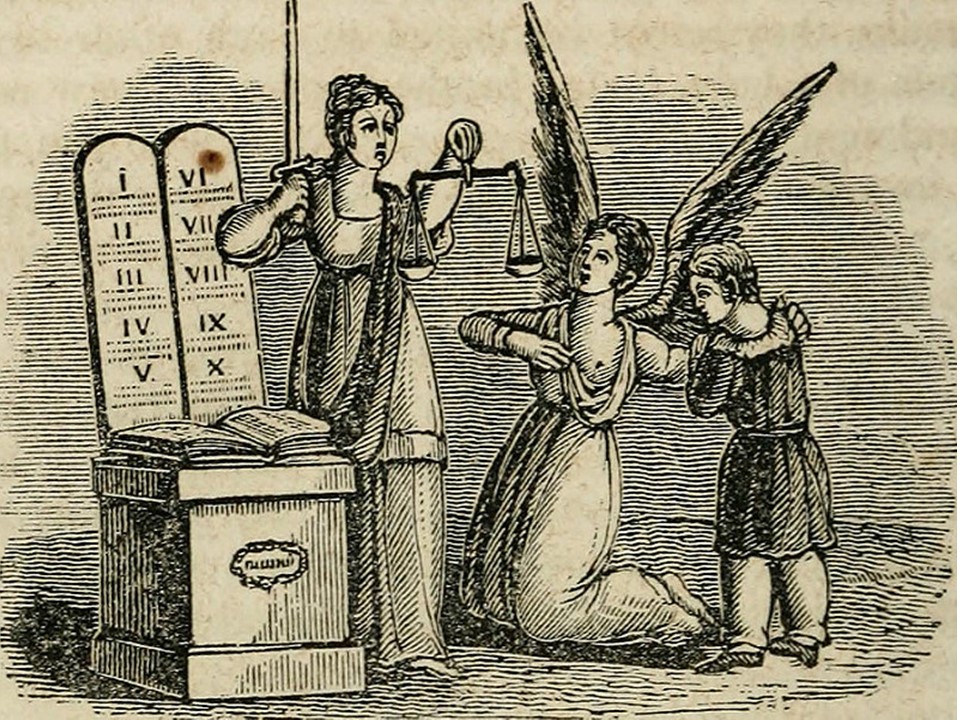 Psalm 1 is just one of several Psalms that extol the virtues of following God’s laws. Perhaps the best known, of such Psalms, is the 119, which is also the longest Psalm in scripture, going on for 176 verses. If I ever decide to preach on the whole 119 Psalm, I’ll give you advance warning so you can pack a picnic… Of course, that week, nobody will show up. Both Psalms, the 1st, which is rather short, and the 119, a marathon, encourage us to pay attention to the ways of the Almighty. Near the opening of the longer Psalm we’re encouraged to “delight in God’s decrees as much as we do in riches, to meditate on God’s precepts, to fix our eyes on God’s ways, to delight in God’s statutes, and not to forget God’s word.”[6] These positive verbs direct us toward God and an understanding of God’s laws.

Now let me clarify a point. We can get a bit carried away with our emphasis on the law. After all, the law does not have the power to save us. The law points to our need for Jesus’ salvation and by obeying them, we’re allowed to enjoy life here and now. Obeying the law isn’t going to save us, but it will make our lives better and that’s its purpose.[7] 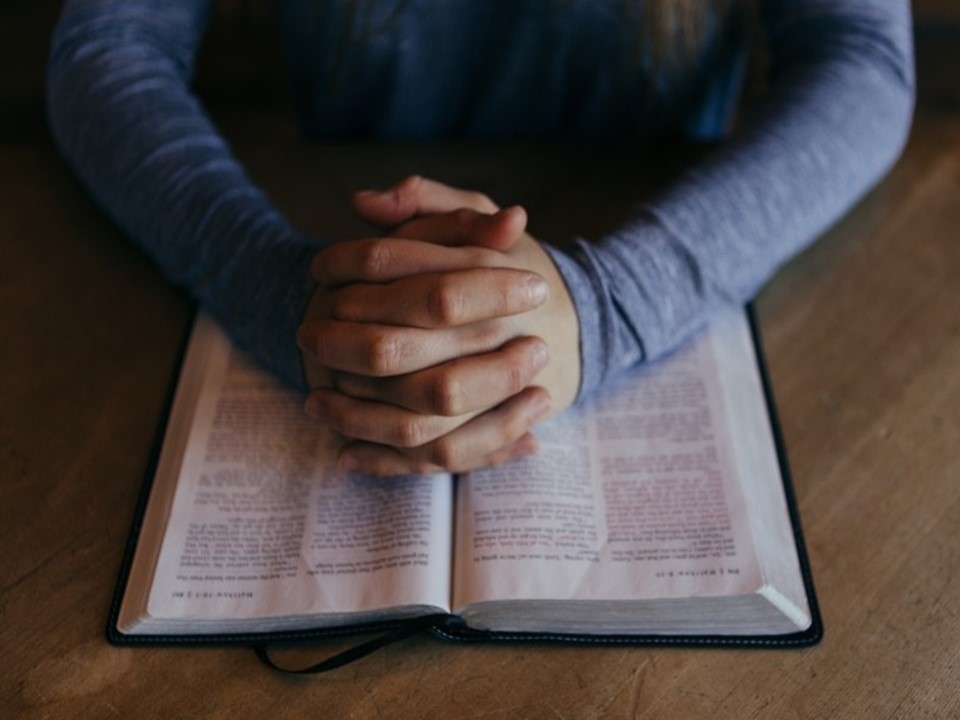 I like this idea of mediating on the law that’s found in both the 1st and 119th Psalm. It doesn’t mean memorizing the 10 commandments (although that’s not a bad idea) or the 600 and some other laws found in the Hebrew Scriptures. Instead, to meditate means to internalize the laws so they become, by second nature, our guiding rule. Such meditation will allow God’s will to shape our will, and ultimately, that’s what it’s all about, us following God’s will.

If we are following God’s will, we’ll be like that tree by a stream. Such trees grow fast, drawing upon available water. Likewise, if we live in a way that allows ourselves to be nourished by God, our lives will indeed be blessed. We may not have the riches or the power that we once desired, but we will be content and at peace with ourselves and with God. 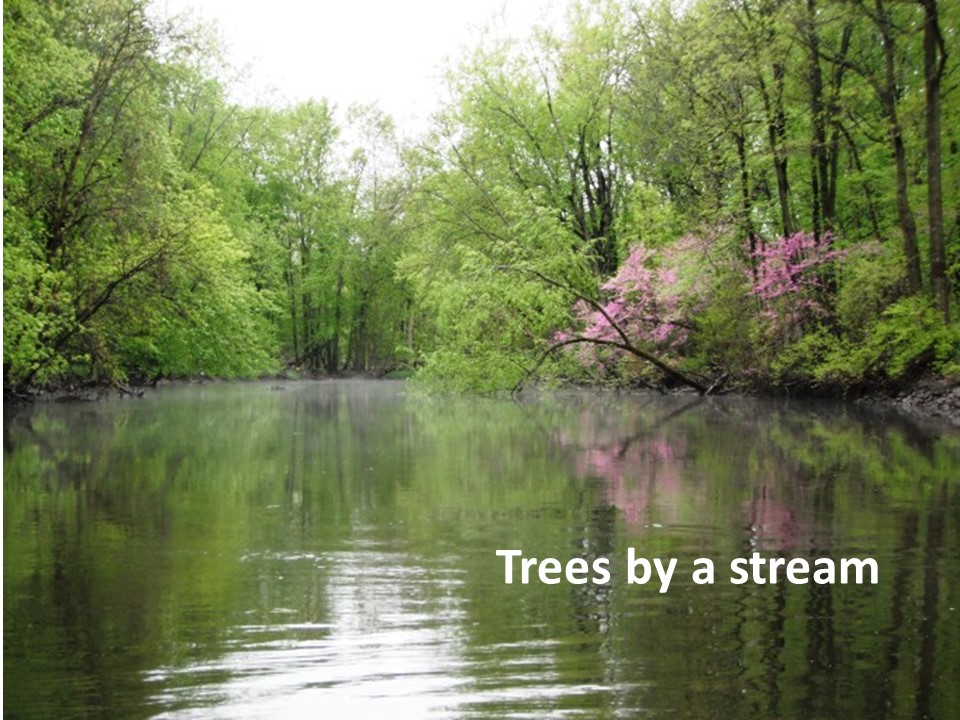 Spring along the Thornapple River, MI

Of course, this psalm presents parallel images. The righteous is like a well-watered tree. The wicked, however, have no roots. They’re like the chaff that comes off the wheat during the milling process. The chaff blows away, it easily burns and no longer sustains life. The choice we make, whether to follow or run from God, determines which image applies. Do we want to be a tree, or husk blown in the wind? These two images lead the Psalmists to conclude with a warning of judgment. The wicked, the chaff, will be judged. But the righteous, the one watered by the Lord, will stand tall. 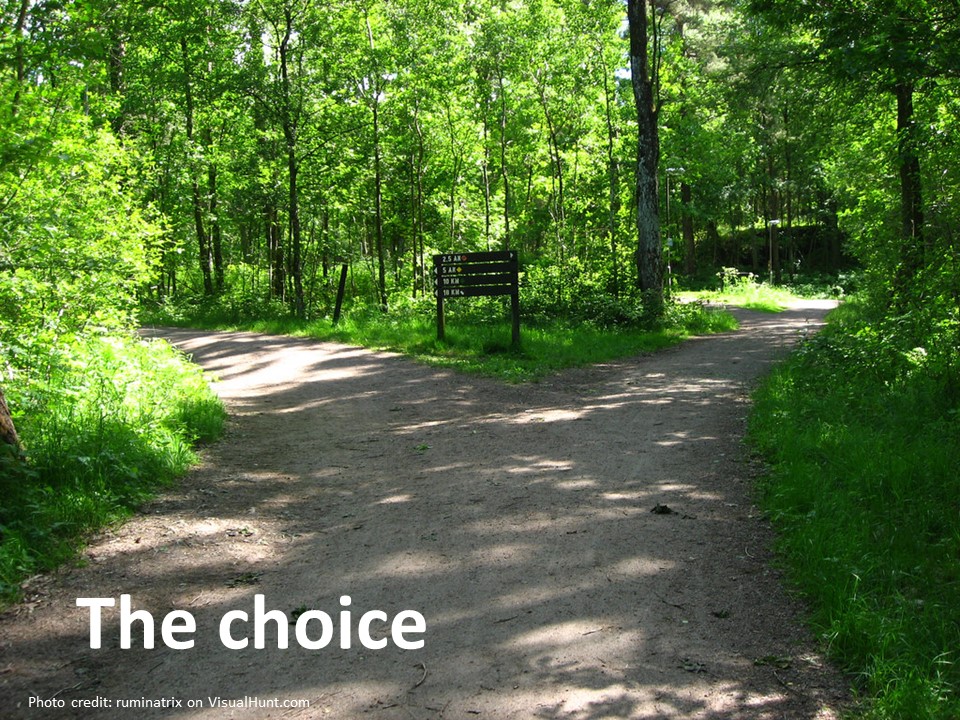 The choice is ours. Whose side are we own? Those who compiled the Psalms placed this particular Psalm first, so that when someone began to read this book, he or she would be encouraged to make a decision to follow God and seek out God’s ways in all they do. In a way, Psalm 1 prepares us for the rest of the Psalms, which quite interestingly consist of five books, as in the Law, or the Torah.[8] The Torah called the Hebrew people to align themselves with God.  Likewise, the Psalmist calls us to align ourselves with God, drawing upon the rest of the Psalms as that tree draws upon water.[9]

“Two roads diverge in a yellow wood…”  Which one will you take? Psalmist calls you to take the way outlined in this book, to mediate and internalize God’s word.  Amen.

[5] See comments about mothers watching their sons die in a BBC article on the woman who served as communication director for the Texas Prison in Huntsville and who has observed more than 300 executions. http://www.bbc.com/news/world-us-canada-43995866

[7] John Calvin and other reformers taught that the law had three purposes: to show our need for repentance, to help us live in God’s will, and to help keep the reprobate in check.