I pretty much thought I had the sermon all together Friday. Then, after the wonderful preschool graduation, I came home and learned about the latest school shooting. These have become all to frequent. As I had planned my sermon around Ezekiel’s experience in the Valley of Dry Bones, I realized I was not through with my sermon.

In our polarized world, there are all kinds of debates around how we are to “fix” the issue of mass shootings in our country. I am not going to offer a solution. But I want to tell you this: the message of Pentecost is that God can do incredible things through us. Get that, through us! We’re now God’s soldiers in the world. And we have to be willing to take risks and to trust in God’s divine spark, not our own wisdom or ideology. When we depend on ourselves, we quench the spirit and snuff out the flame. Come, Lord Jesus, Come and fill us with your Spirit. Set us on fire that we may call people to your kingdom of love.

We’ve already heard the passage about the disciples in the Upper Room waiting on the Spirit. Our Old Testament reading is from the 37th Chapter of Ezekiel… 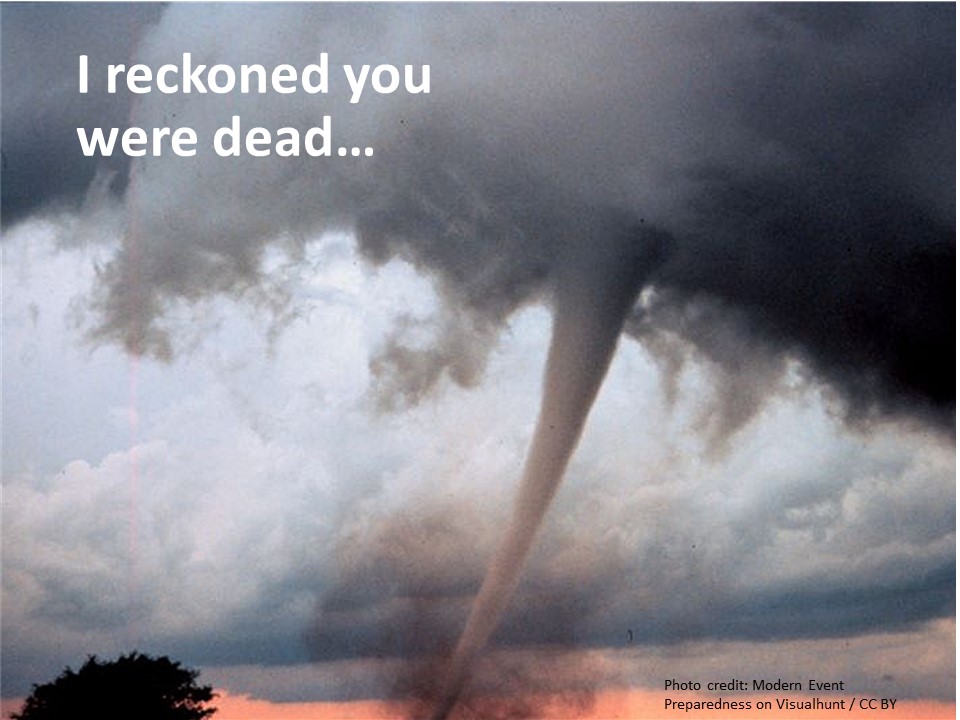 Fresh out of college, Richard Rubin headed to Alabama where he worked for a newspaper and had a jazz show on a local radio station. One night at the station, he was handed an emergency announcement. A tornado had been sighted. He was in the midst of telling everyone to take cover when the twister hit the station’s tower and was knocked off air. A week later a temporary tower had been set up and they were back on air. The first night he was back at the mic, a middle aged woman called the station and shouted, “Praise Jesus! I reckoned you were dead.” I like that, “I reckoned you were dead.”[1]

Today’s scripture readings are all about people who reckoned they were dead being brought back to life by the wind of God’s Spirit. 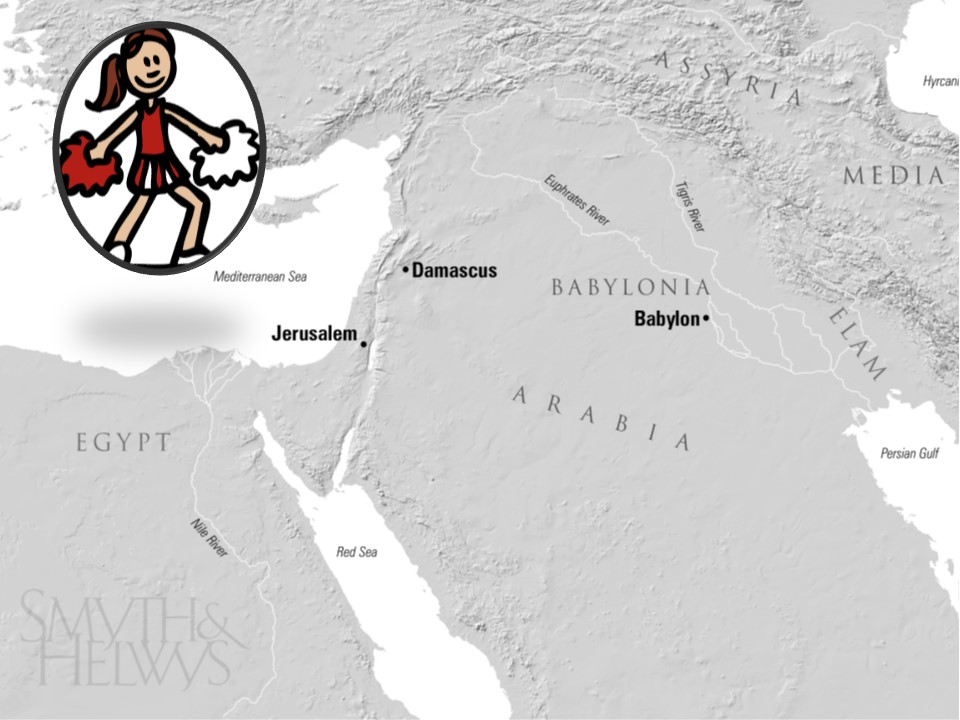 Let’s take a trip to Babylon, that great city where the Prophet Ezekiel lives with a remnant of the Hebrew people. As a priest, Ezekiel has the unpleasant task of being the cheerleader for a beaten team. The Babylonians have not only conquered and destroyed Jerusalem, they are sending much of the population into exile. Homeless and without a temple, the people of God are lost. They feel if they are at the end of their existence. Life has left them. With the temple in Jerusalem destroyed, it feels as if they’re cut off from God. The temple had been their connection to the Almighty for centuries. As a people, they feel as if they are dry bones, slowly bleaching out in the hot desert sun. 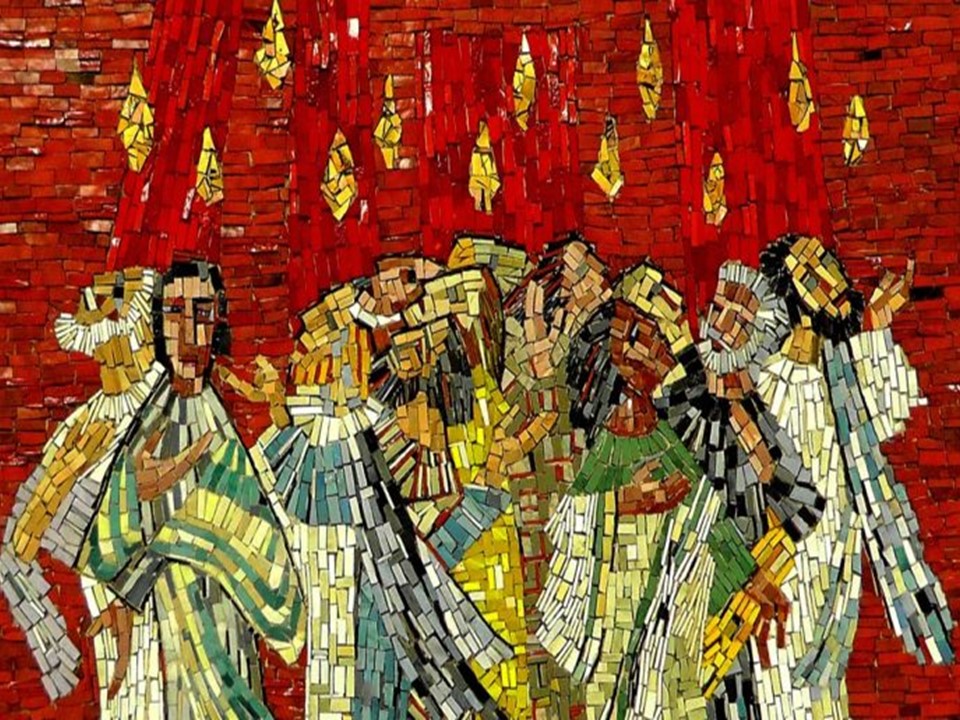 The situation with the disciples and those gathered in the Upper Room on Pentecost may not have been much different. The followers of Jesus, who seemed to be confused when Jesus was present, have now been without his guidance for some time. They are weary, waiting, and beat. They are afraid they too might end up like Jesus, nailed to a cross. Scared, and unable to think clearly, they hid. They seem about as likely as a bunch of dry bones to start the Jesus movement.

And look at us. Are we any better? Too many people these days reckon the Church is dead.

It’s always easier to be pessimistic than optimistic. But in both of these Biblical passages, pessimism seems logical. After all, what hope can a defeated nation or a collection of poor Palestinian Jews have?  Or what hope does the graying church in America have these days? We at SIPC are on the leading edge of that graying movement. Will people listen to us, to our message of love and hope, to our critique of a sinful world and our call to a new kingdom? 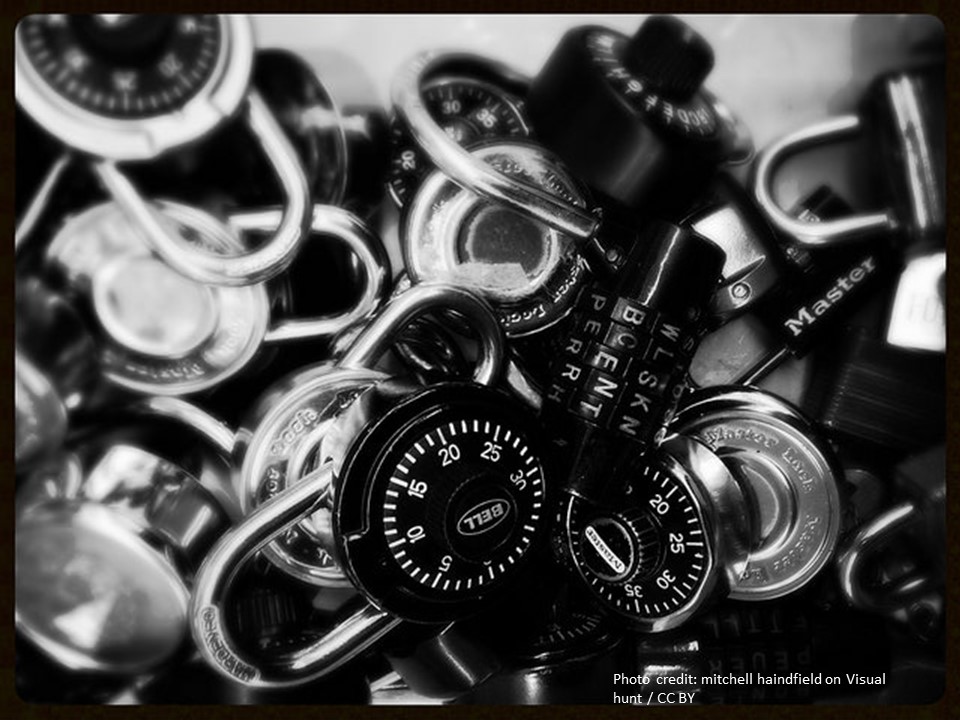 Events like Friday’s shooting hangs over us. We realize with all our resources, with all our skill, with all our prayers, things appear helpless… Batten down the hatches, arm ourselves, seal off the borders, be safe. There is no doubt that we live in a dangerous world, but our help, as the Psalmist reminds us, “is in the name of the Lord, who created heaven and earth.”[2] 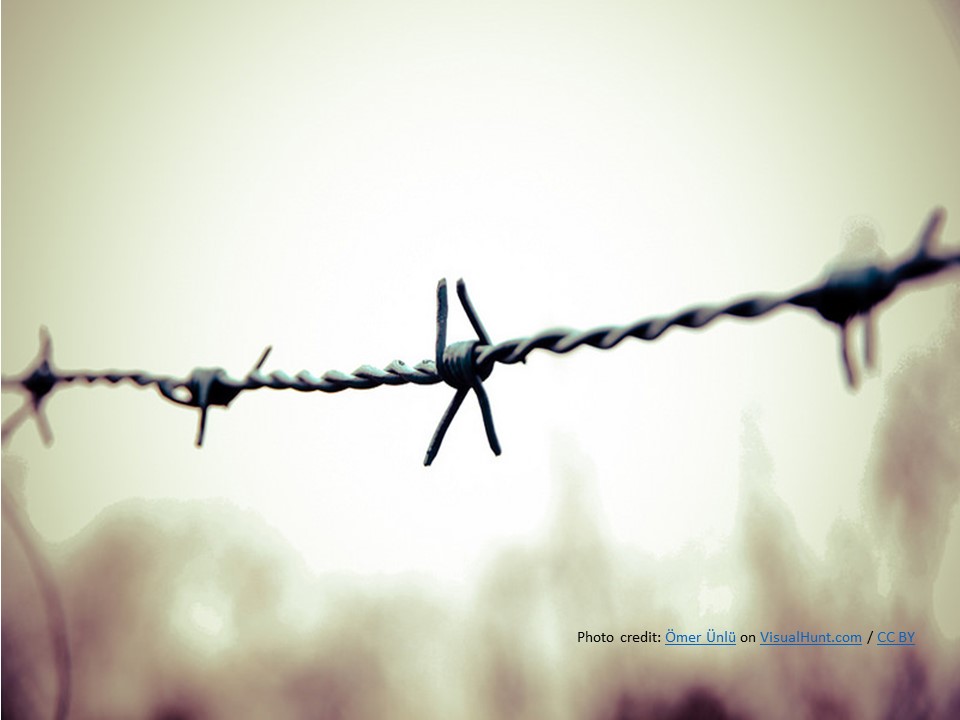 My question is will we ever faithfully fulfill the tremendous responsibility God has given us? 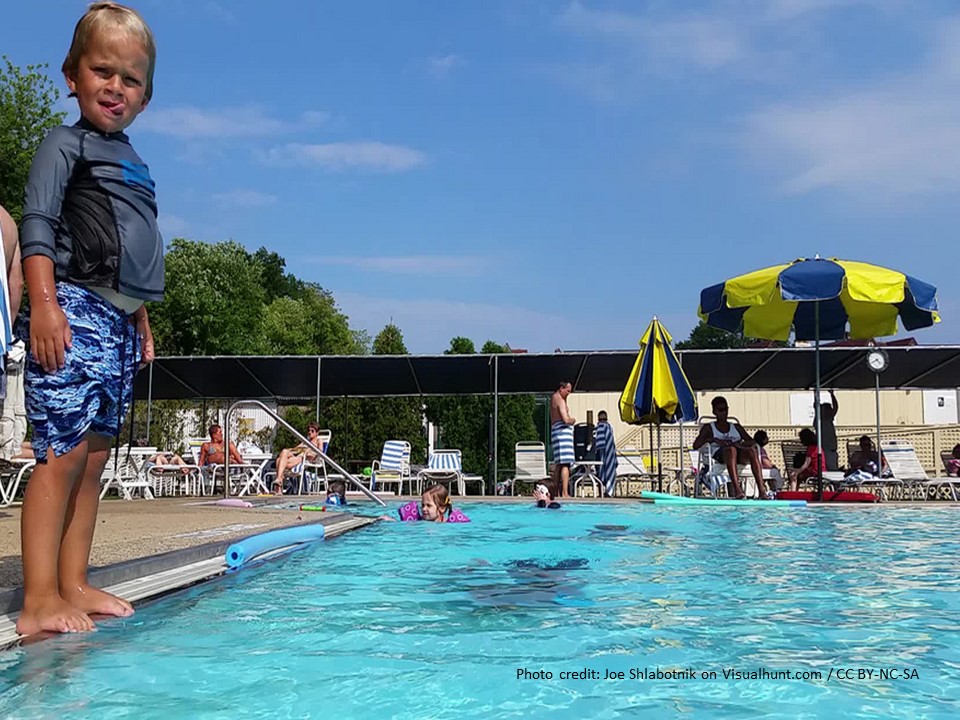 God’s people have always had its critics and quite often we’ve deserved them. There is much for which God’s people can be criticized. We are often hypocritical, saying one thing and doing another. Or we think we know what we should be doing and dive head first into the pool without prayer or consulting God’s word. That’s like jumping in the pool without knowing how to swim. You know, it’s a wonder the church still exists.  After all, we didn’t even start off on the right foot. In that upper room there was Peter, who’d denied Jesus three times. There was Thomas, who’d doubted Jesus. There were others who’d ran when afraid. In Babylon, there was those who felt the faith tradition that had been handed down since Abraham and Moses was all done for… Yet, 4,000 years after Abraham, God’s people still exist in the world. Why? Because it’s not about us. God’s Spirit still moves in the world.[3] 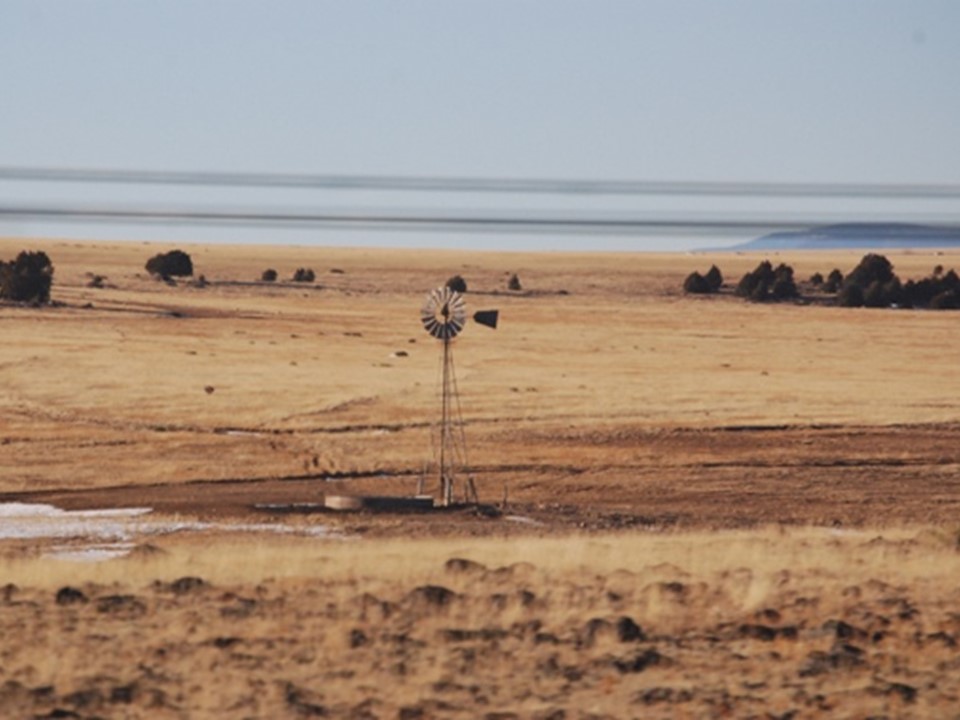 You know, both the Hebrew and Greek word translated as Spirit derive from a world that relates to the movement of air, or wind.[4]  To the ancient people, wind was mysterious. We know a bit more about wind today, everything from how ocean and land temperatures, jet streams, mountains and high rise buildings affect wind. But the ancients didn’t have a clue what caused wind. Like God, wind was a mystery, which may be why they used the word to as describe God’s Spirit. It’s why I often smile when I feel the wind on my face, I am reminded of God. 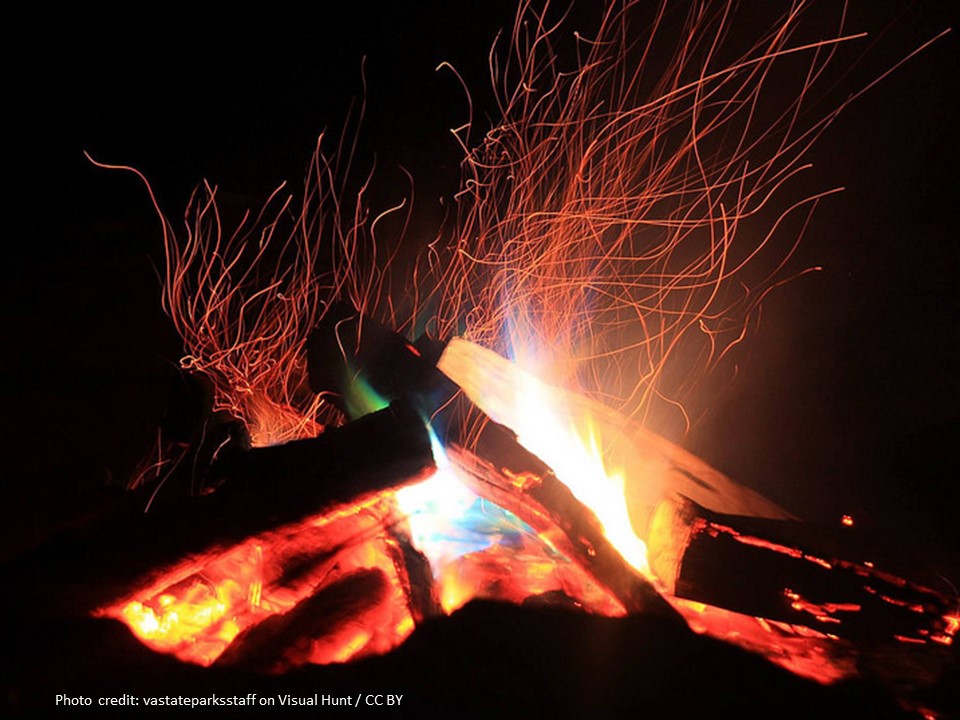 Between Christmas and New Year’s Eve, in my first year of college, my uncle and I decided to backpack a new trail that ran the length of the Uwharrie Mountains in central North Carolina. We picked one of the coldest weeks of a cold winter. The temperature at night dropped down below zero. But the stars were brilliant at night and the air still. When you exhaled into the cold, your breath seemed to hold together in front of your face for a few seconds. The last thing I wanted to do in that weather was to struggle to build a fire in the morning, so I carefully banked the fire and then put stones around and on top in the hope that in the morning, they’d still be some coals.  I woke around two in the morning, startled. The wind had picked up and flames were shooting through the rocks and reflecting off the tent walls. The fire needed tending before our camp became an inferno. While my uncle slept, I crawled out of my warm bag and took care of it.

Just as wind can give new life to smoldering coals, God’s Spirit is with us and can bring new life. That’s what happens in both of our Scripture readings this morning. Ezekiel is shown a vision of a valley of dry bones and asked if they can live again.[5] Notice his answer. He doesn’t say, “Yes, Lord, you can do anything.” Ezekiel hedges his bets, saying, “Oh Lord God, you know.” At least he got that part right, if those bones live again, it’s only because of God’s intervention. 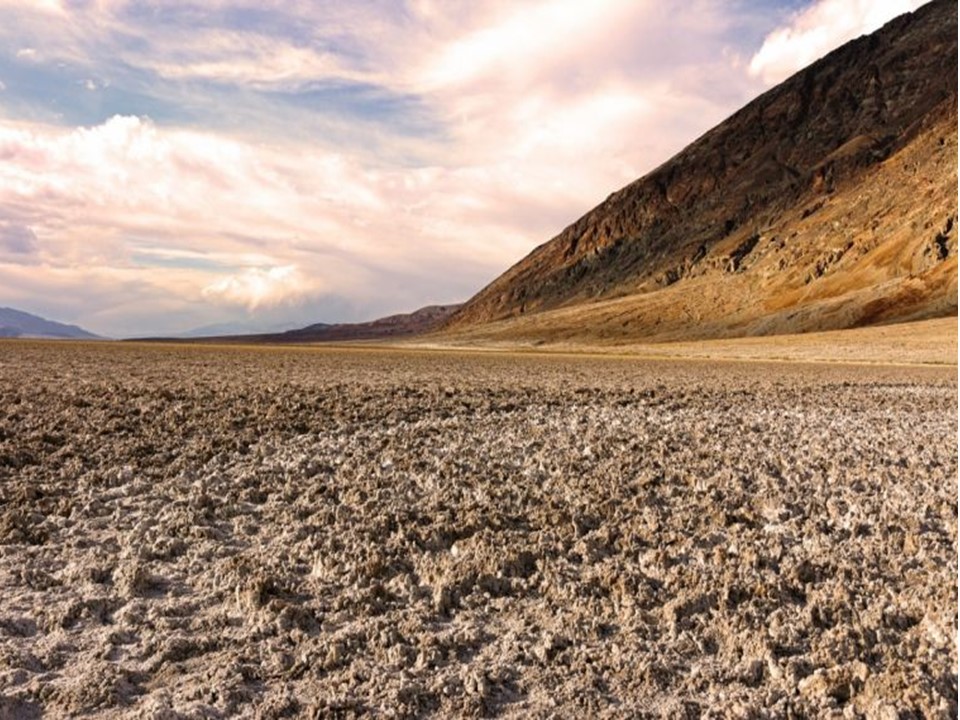 Then, Ezekiel is told to prophecy to the bones. We’re not told if he looked around to see if someone was watching. He prophesized and the bones began to come alive. In what would make a good zombie flick, muscles begin to attach to bone and skin grows on top. Pretty soon, there is a multitude of bodies… But there is no life in them, so he’s ordered to call out the breath of God, which upon his call comes forth the four winds.  Now you have standing at attention, a vast multitude, an army for God, waiting for orders.

In our New Testament reading, God’s Spirit appears as flames that come upon a scared collection of people in hiding. The Spirit gives them the boldness to go out into the street proclaiming what God has done in Jesus Christ. The Spirit is the unifier, bringing God’s people together. If you read on a little further, you’d see that over 3000 converts are made that day.  Although they had been depressed and pessimistic, when the Spirit came upon them, they no longer hid in the Upper Room, but go out and change the world. 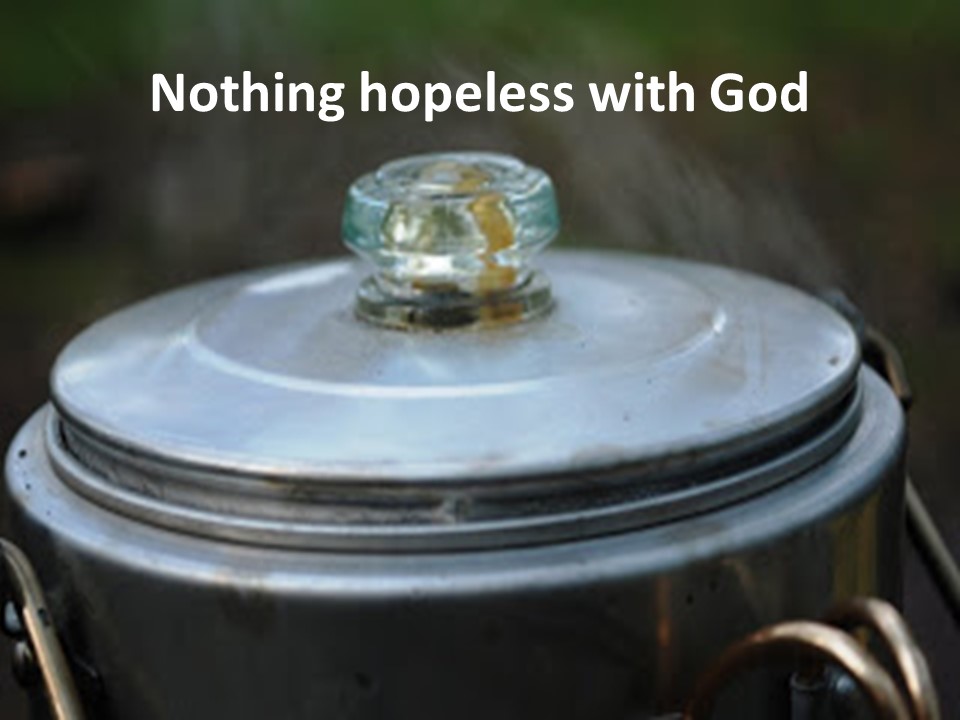 These two stories show the power God has to change the situation. Nothing is hopeless if God is present. And God’s Spirit is still with us! Do you believe that? Things which seem futile to the human mind can seem quite minor when we are with God. If we believe God is with us, we can do incredible things. It’s not always easy, but if it’s worthwhile, it’ll be worth it.  And let’s not forget, the reason the church survives is not because of our efforts, but because God is the one who gives us life. Things can become pretty bad, as they were in Babylon or after Jesus’ ascension, but God can always renew and restore. It takes but a breath upon dying coals to resurrection. It takes but a breath from God to set us on fire, to renew us for his work in the world.

Pessimism is a symptom, I believe, of trusting only in ourselves. As believers, we’re not to be pessimistic because our trust is not in us, it’s in a God who has the power to create and to restore. We can’t control what happens tomorrow, or even this afternoon. Realization and acceptance of this should humbly drive us to our knees. But when we realize the power of our God, we should then stand tall and be willing to step out in faith and work, with other believers, in building a better world. 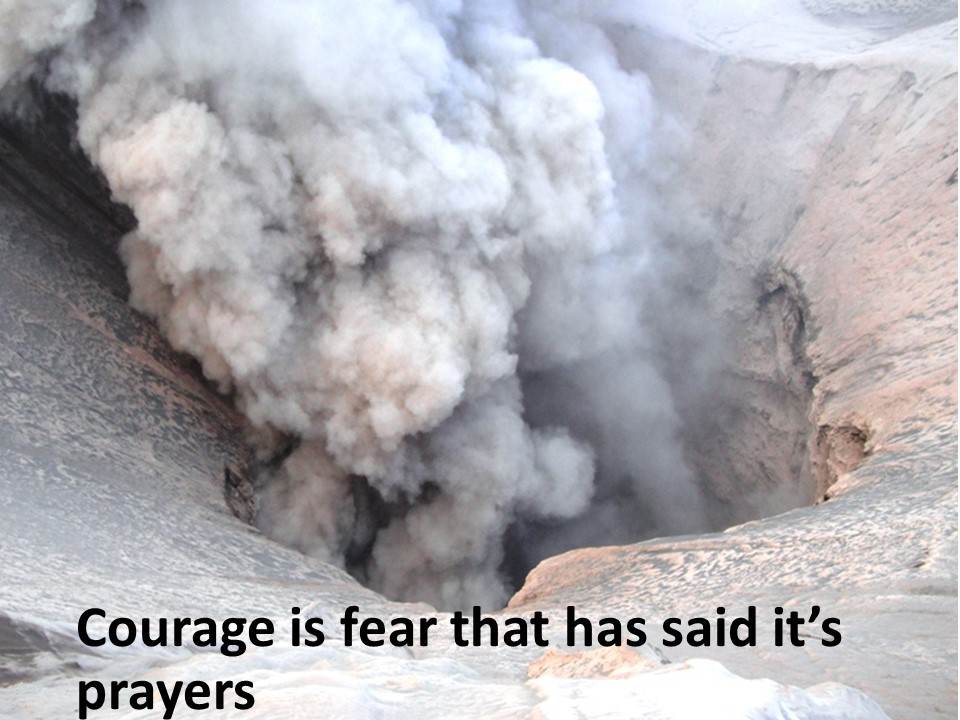 I know the world often looks dark and it is easy to be pessimistic. But remember the saying we had on our sign a few weeks ago, “Courage is fear that said its prayers.”  Friends, don’t be weary. Trust in God and step out in faith. The Spirit is with us. To the new elders, whom we’ll be ordaining and installing in a few minutes, remember that God’s Spirit is with you. Amen.

[1] Story was told by the Rev. Joanna Adams on the Protestant Hour, May 31, 1998.  I added the jazz part after reading about Rubin’s stint down south.

[5] Ezekiel’s experience is often interpreted as a vision, but others suggest it might have been a trance or seizure.  See Margaret S. Odell, Ezekiel, (Macon GA: Smyth & Helwys, 2005), 454.