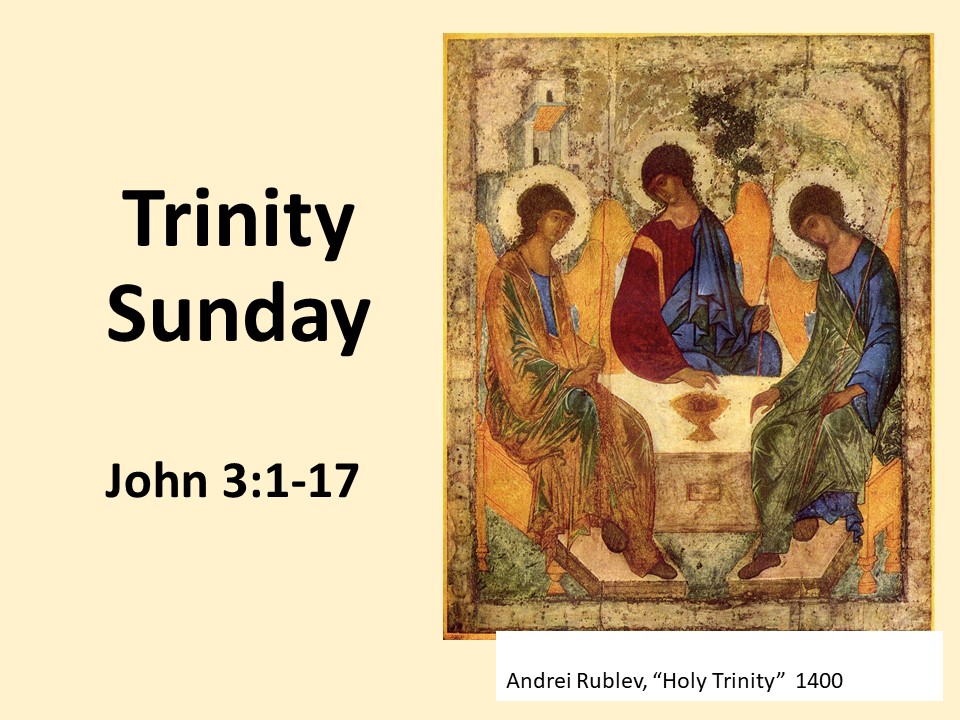 In the liturgical calendar, today is Trinity Sunday. The Trinity, like God, cannot be fully understood by those of us who are mere mortals. It’s a mystery. Yet, it’s a key concept of the Christian faith. The doctrine developed out of an attempt to understand, as much as possible, God and God’s love for the world. The Father creates and loves the world; the Son, in love, redeems the world; and the Spirit, in love, draws us back to the Father and Son. In John 3, our passage for today, all three persons of the Godhead are witnessed. Most people know John 3:16, but there is a lot more in this chapter as Nicodemus comes to Jesus at dark. Read John 3:1-17. 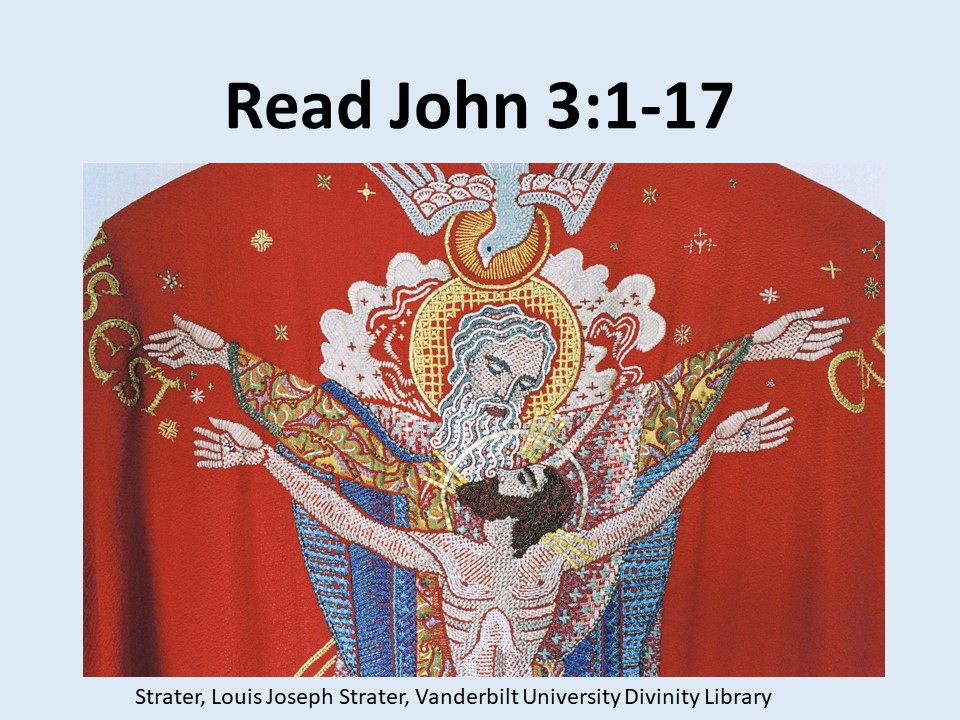 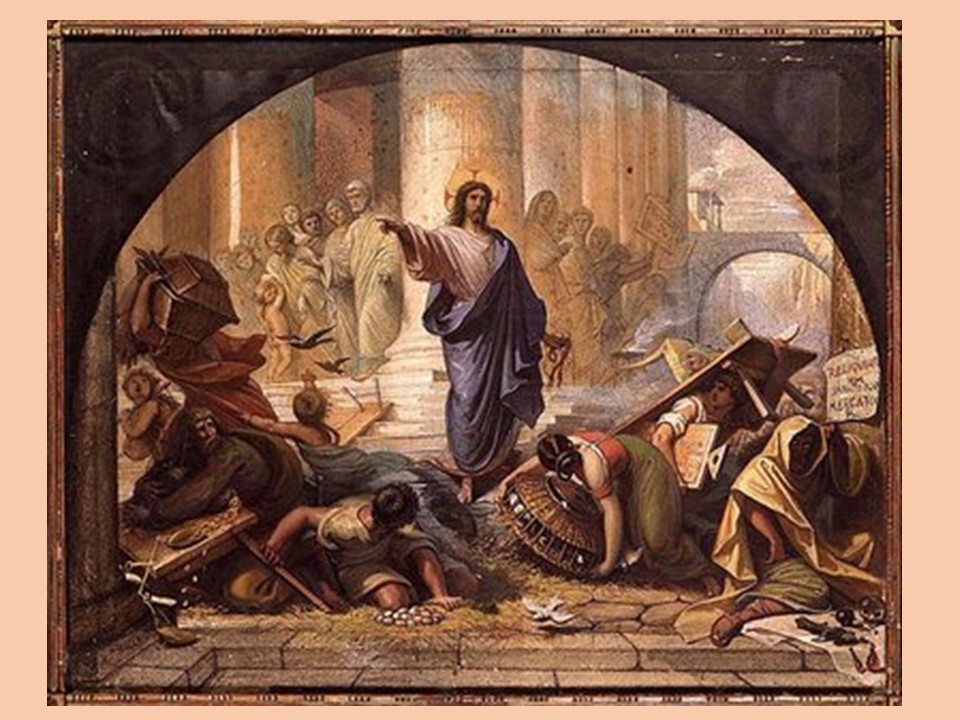 Word has gotten around about Jesus. If you’ve read the previous chapter, you’ll know about Jesus changing water into wine and creating a commotion in the temple. Some are intrigued; others angered. To some folks, Jesus is the hero, a modern day Jeremiah willing to stand against the powerful and expose corruption. To others, especially those within the ruling elite, Jesus is a dangerous demagogue. But the boundaries aren’t quite so clear-cut. For there are some with positions of prestige at the temple, where feelings are running high against Jesus, who wonder about this teacher from Galilee. Nicodemus is such a man. As a member of the Sanhedrin, he’s a leader within the Jewish faith. He’s one of seventy members of this governing body that’s presided over by the chief priest. He’s the type of individual who has a lot to lose with episodes like Jesus’ cleansing the temple, yet he’s drawn to the Savior. “Maybe Jesus is right,” Nicodemus thinks. 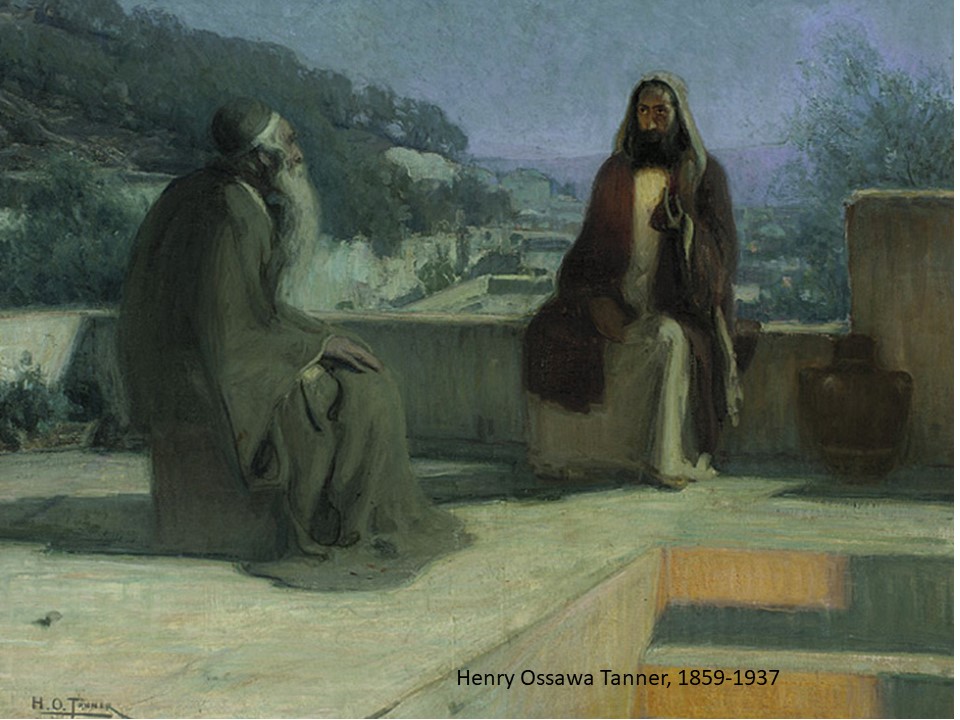 One night when Jesus is in town, after everyone else is in bed, Nicodemus calls. There are a variety of reasons Nicodemus may have visited Jesus at night. Did he not want anyone to know of his interest in the Galilean? Was that the reason why he slipped over to see Jesus after dark?  Or was it because nighttime, when the world is quiet, the preferred time for rabbis to study? In that’s the case, Nicodemus uses his study hall time to learn more about Jesus. Although I agree with the first interpretation (that Nicodemus didn’t want to be seen), John uses the night visit to reinforce his themes of darkness and light.[1] Nicodemus comes to Jesus during the dark, but he’s seeking the light.

Let’s look at this encounter between Jesus and Nicodemus. As I retell the story, I’m borrowing heavily from Frederick Buechner. In Peculiar Treasures, he has a wonderful account of this meeting.[2]

Nicodemus waits until all the neighbors are asleep before knocking. Even though it’s after working hours for most people, Jesus welcomes him. Nicodemus finds the Galilean to be patient and kind. But then after some chitchatting, Jesus drops the bombshell. “Nicodemus, he says, “the whole thing boiled down to being born again. If you aren’t born again, you might as well give up.”

“That’s all very well,” Nicodemus continues sarcastically, “but just how are we to pull something like that off? How can a man of sixty-five be born again when it’s challenging enough to get out of bed in the morning.  Can a man enter his mother’s womb a second time, when it’s all he could do to enter a taxi without the driver coming around and giving him a shove?”

A gust of wind happens to whistle down the chimney at this point, making the dying embers burst into flame. “Being born again is just like that,” Jesus says. It’s not something you do. The wind does it. The Spirit does it. It’s something that happens.” Shaking his head, Nicodemus asks, “How can this be?” Jesus then really lets the old Pharisee have it. 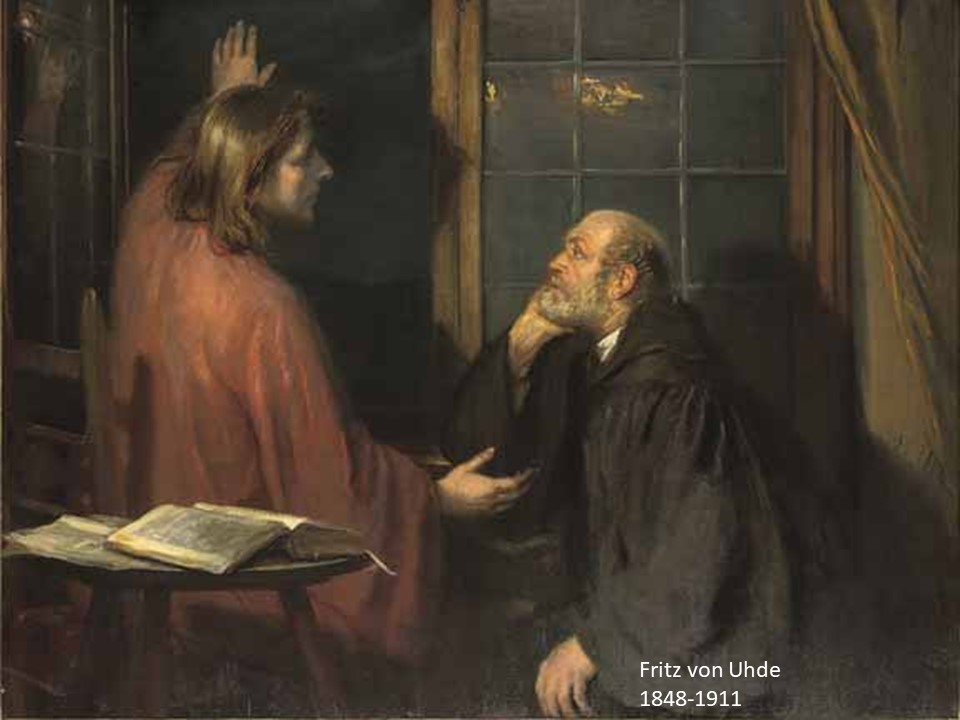 Nicodemus is speechless as Jesus proceeds. “I’m telling you God’s got such a thing for this loused-up planet that he’s sent me down so if you don’t believe your own eyes, then maybe you’ll believe mine, maybe you’ll believe me, maybe you won’t come sneaking around scared half to death in the dark but will come to, come clean, come to life.”

Nicodemus breath is quickening and his heart is pounding. He hasn’t felt this way since his first kiss, since the time his first child was born, or the time they told him he didn’t have heart attack, only a bout of ingestion.

Jesus continues on, talking about himself as he reminds Nicodemus of God’s love for the world, a love that God sends his only Son to redeem. God doesn’t want to condemn the world but to save it.

What can we learn from this discourse between Jesus and Nicodemus? 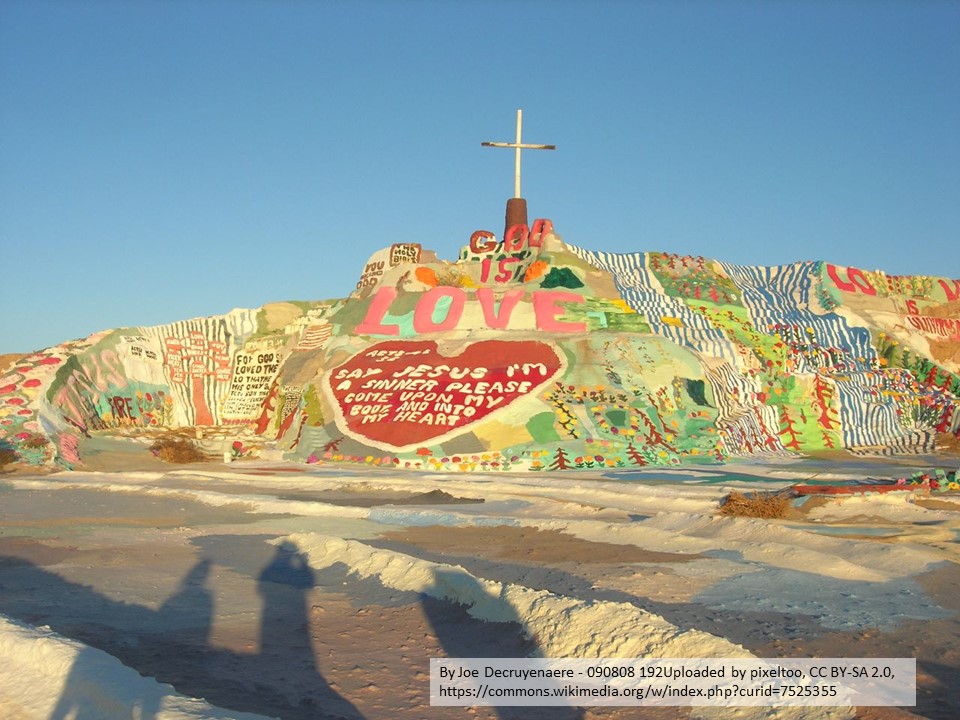 First of all, I wonder if most of us aren’t a little like Nicodemus. We hear about Jesus, perhaps we are somewhat interested, but don’t want to come out in the open to check him out. Most of us don’t want to do anything not considered “cool”—or whatever the word of the day may be. In a world where the self-sufficient survive, accepting the grace Jesus freely offers could be interpreted as a sign of weakness. So we either reject Jesus’ teachings, or we alter them in such a way that they are more palatable to our taste. An example of us making Jesus more palatable comes from an editorial a few years back that spoke of Jesus “bulking up.” According to the editorialist, Jesus now appears in popular culture looking more like a professional wrestler or an angry soldier. Such images “Speaks to a muscular evangelism tired of turning the other cheek.”[3]

Altering Jesus’ teachings in such a manner, just like rejecting him, keeps us in the dark, is wrong. If we want to accept him, we have to come out into the open. We have to “let our light shine,”[4] for it is only in the light that we are able to purge ourselves of all that has been corrupted and move toward holiness. 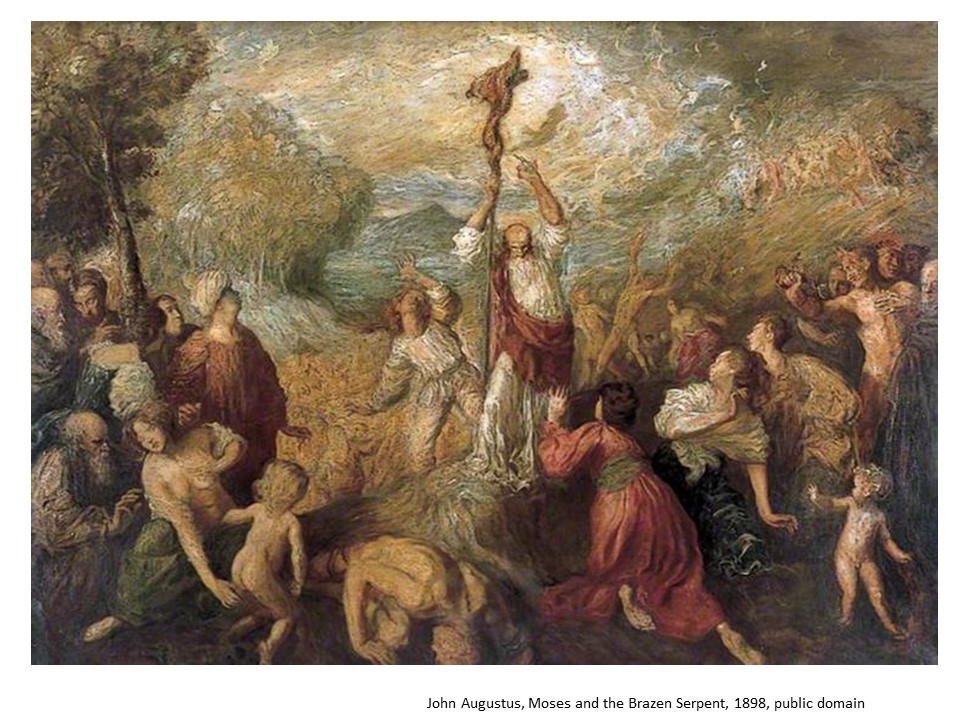 When we come to the light, when we come to Jesus, we are forced to see ourselves for who we are. Jesus confronts our innermost fears—the primary fear being death. I think this is one the reasons Jesus refers to Moses lifting up the snake and linking it to his own upcoming death. The Hebrew people during the Exodus were afraid of the snakes. What does God have Moses do?  He has the people look at a bronze snake that he lifts up on a pole.[5]  Only by looking at that which they fear are they able to be saved. Only by Jesus dying, experiencing our worst fear—death—is he able to save us. And for us to experience the salvation he offers, we too have to die, we have to let go of the past and move into his future. 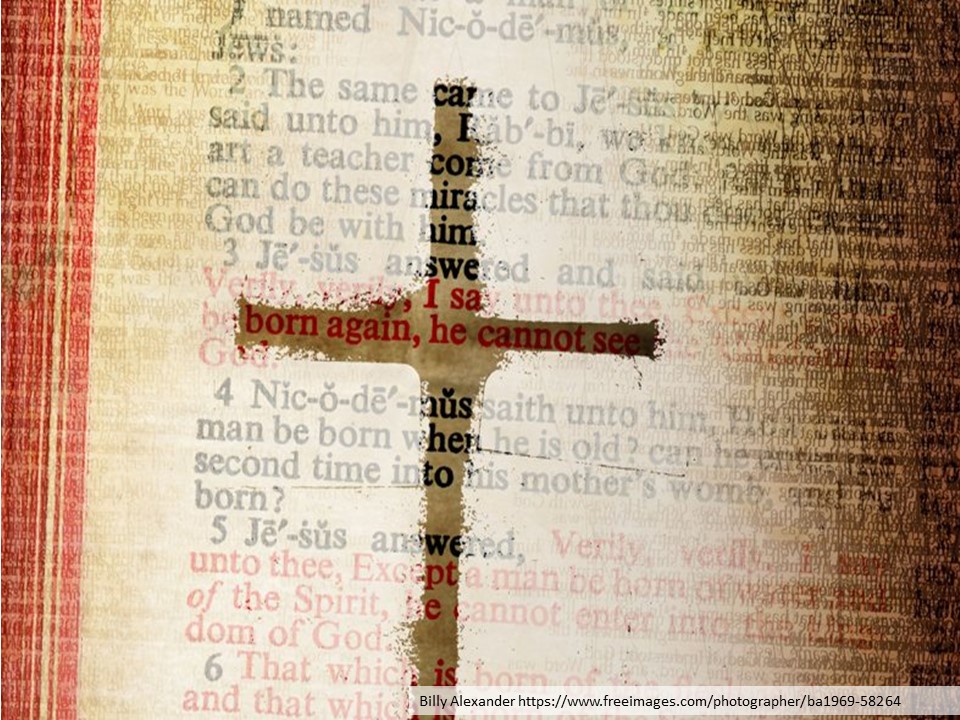 But this isn’t something we can do on our own. The second thing we learn is that salvation is a mystery; it’s tied to God’s action. We don’t save ourselves. Nicodemus is right, there’s no way we can crawl into our mothers wombs and be born again. And that’s the point. There is no way we can do this! In the other gospels, Jesus makes says it is easier for a camel to go through an eye of a needle than it is for the rich to go to heaven.[6] Again, it can’t be done and that’s the point. This is God’s work, not ours.

It drives me nuts when someone talks about how we just have to accept Jesus and are born again as if it is just an easy intellectual decision. Such a person may lift themselves up as an example. But the truth is that by our own actions we can’t be born again. The only thing we can do is open ourselves up to that mysterious wind, to the Spirit which blows on God’s command. We can present ourselves as a sacrifice to God, we can say yes to God, but the hard work belongs to God.

Being born again, or being born anew, can also be translated as being born from above, as the New Revised Standard Version of the Bible renders it. And that’s what must happen. God has to act. God has to come down from heaven and enter our world. We can’t save ourselves: God must come into our lives through Jesus Christ and transform us. And when we’ve experienced this renewal, it’s not something we should brag about or think of ourselves as superior to others. Being born again is humbling! 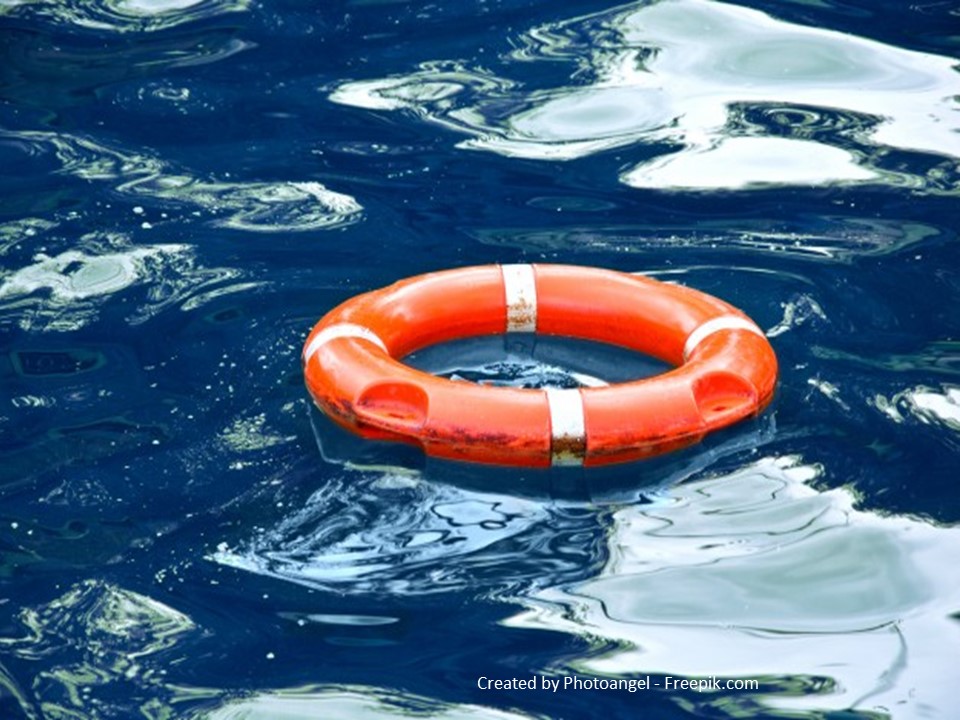 Think about our encounter with Jesus Christ in this way. You fall into the Intracoastal Waterway and can’t swim. It’s not like you can quickly teach yourself to swim, and save yourself and be able to brag about your quick wits. Instead, you’ll be drowning and there’s nothing you can do but panic. Then, when someone pulls you out, and while you’re sitting, soaking wet, on dry ground, all you can do is to say humbly and respectfully, “thank you.”

Thank you Jesus for that wind that mysteriously blows into our lives at the right moment.

In addition to not bragging about our salvation, we shouldn’t look down on Nicodemus. It’s easy to think of him as being chicken, going to see Jesus at night. But the truth of the matter is that Nicodemus is a lot like us. He’s a seeker. Not only is he a seeker, he’s a scholar. He knows all about his Jewish heritage, what God has done for Israel, the-ins-and-the-outs of the Law given to Moses. His problem, at this point in his life, is that he can’t think outside the box. He’s trapped into his own little world and Jesus’ words just go over his head. This isn’t to say that Jesus is anti-intellectual. It’s just that knowledge alone isn’t enough for our salvation. If it was, all we’d need is to graduate from Sunday School. But we need so much more… 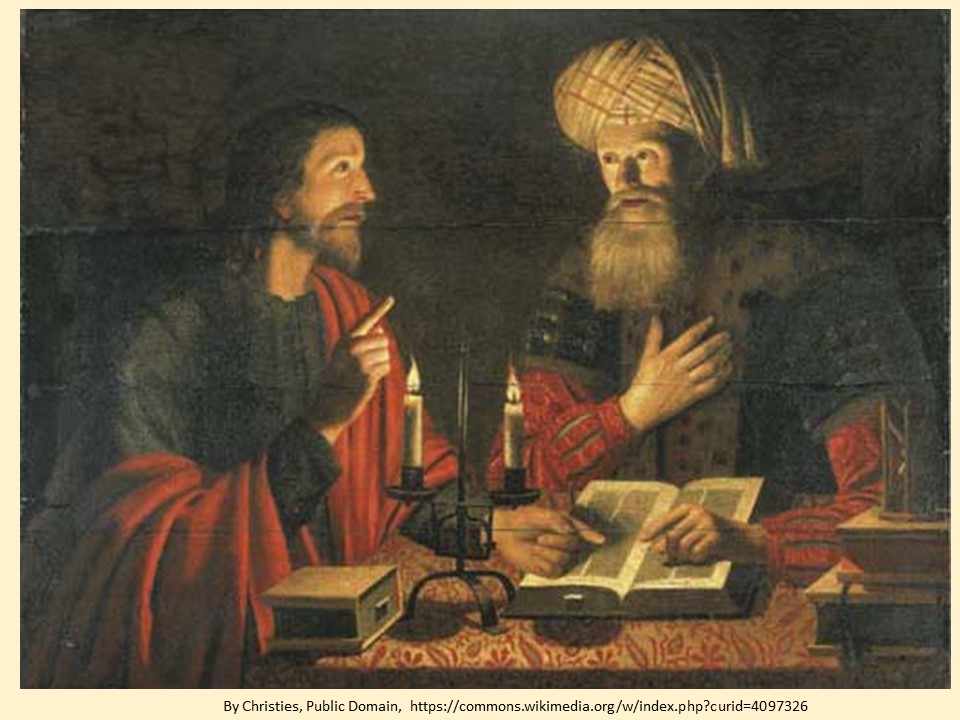 Nicodemus, if you follow his story, appears twice again in John’s gospel.[7] His interest in Jesus remains and maybe he did experience the movement of the Spirit. We can’t say for sure, but John’s purpose isn’t to give us Nicodemus’ story. John wants us to open ourselves up to the Spirit, so that we might accept and believe in Jesus Christ. Are we truly open to what God has, can, and will do through Jesus Christ? Or are we like Nicodemus, in our story today, confined by our own limited abilities and unwilling to accept the truth of the one who has the power to save?

Let us be open to that mysterious wind that blows freely. Accept God’s love and be humbled. Let us pray.

Almighty God, may we be open to the wind of your mighty spirit, blowing through our lives. May that wind blow us into a relationship with you and your Son, so that we experience the fullness of your love. May that wind fan a flame in our lives that expresses your love to the rest of your creation. This we pray in the name of the Triune God, Father, Son and Spirit. Amen.

[1] For a discussion of the various reasons the visit may have occurred at night, see Raymond E. Brown, The Gospel According to John I-XII: The Anchor Bible (New York: Doubleday, 1966), 130.  Although I, and Brown, disagree with the interpretation that Nicodemus came at night because it was his study time, a minority of interpreters follows this line of thinking.  See Patricia Farris, “Late-night Seminar,” Christian Century, January 30, 2002.

[3]  O. Benjamin Sparks, “What the New Year Holds,” The Presbyterian Outlook, January 3, 2005.  Sparks quotes from an editorial titled “What Did Jesus Look Like,” Richmond Times-Dispatch, December 9, 2004.