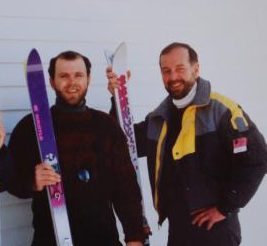 This article appeared in the October 22, 2007 issue of the Presbyterian Outlook. The photo is from the early 1990s and shows Brent and a younger me (I still had some hair) after a day of skiing in Ellicottville, NY.

I stayed at the home of friends the night before Brent’s funeral, in the hills on the north side of Pittsburgh, above the Ohio River. Unable to sleep, I listened to the lonely wail of trains on the tracks down below. Trains heading east slow down in this section, before heading over the trestle and into the city, their cars bumping into one another as the brakes are applied. Trains heading west pick up speed and their engines strain as they cut through the night, whistling at each crossing.

In the middle of the night in a strange bed, I recalled sitting in Brent’s living room late one evening. He had invited three of us over for dinner. Afterwards, we sat around the fireplace and talked late into the evening, catching up on each other’s lives. Hours later, the conversation paused. Then a train came by, quieter than the others. “That’s the Capitol Limited,” Brent noted, “Chicago bound. You can tell by the sound, you don’t have the clanging of the cars.” Every time a train came through that night, I thought of Brent.

Brent and I met in my last year of seminary. His church was looking for an associate pastor and I’d been recommended to fill the gap while the search was conducted. We quickly bonded. Working with Brent, I witnessed firsthand his gracefulness in dealing with people. He exhibited hospitality. He cared for people, showing compassion to the elderly and the poor and the young. He loved his congregation and the community to which he’d been called. His preaching was solid, biblical, theological, and filled with grace. He strove for excellence and loved life. Whether it was sailing, fishing, attending the symphony, or catching a Pirates or Steelers game, Brent was fun to be around.

Right before Christmas that year, Brent and I took communion to shut-ins. It was a grace-filled afternoon. I would read the Nativity story from Luke’s gospel, stopping with the words “Mary pondered all these things in her heart.” At one home, with a woman in her nineties, Brent repeated the last verse then talked about the woman’s own children, grandchildren, and great-grandchildren, noting how she must ponder many memories in her heart.  Then he talked about how we, like Mary, ponder our memories of Jesus, which remind us of the good and gracious nature of God.

We visited a number of folks that afternoon. Our last visit was a woman suffering from dementia. Although she didn’t know who we were, when Brent took her hand and began to recite the 23rd Psalm from the King James Version, she lit up. Her voice joined ours. Then we said together the Apostles’ Creed and the Lord’s Prayer. Later, as we were driving back to the church, Brent told me how those whose memories fail them frequently recall familiar passages from their youth. Throughout the afternoon I had witnessed Brent freely giving of himself, setting an example of incarnational ministry.

On September 30, 1990, Brent preached my ordination sermon. While I served a church in Western New York, we saw each other frequently. He’d come up to ski and later brought a sailboat to Lake Chautauqua and we’d meet there in the summer. He was still my mentor, but like a good mentor had also become a friend. We often discussed what was going on in my ministry. He’d listen carefully and offer gentle advice. A few years later, Brent officiated at my marriage, advising my wife and me to create a family that would be the salt of the earth, spicing up the church and offering a Christ-like presence to the community. In time, mostly because of distance, we saw each other less frequently. But we kept up, occasionally talking on the phone. When I was in Utah, he came out to ski and when I went back Pittsburgh, we got together. Later on, we met a couple of times at Continuing Education events and had planned to meet again at the National Pastor’s Sabbath last summer. Our relationship had become collegial. He still offered me advice, but also sought advice from me. A few weeks before his death, he and I discussed a new opportunity he had for a call to a church on the West Coast.

It was a Friday evening early in November when a friend from Pennsylvania called. She was upset and asked if I’d talked to Brent lately. “A few weeks ago,” I said, not wanting to say too much for I didn’t know who knew about his potential move. “Brent killed himself,” she blurted out after a pause. I was speechless. Over the next few days more details came light. A Pittsburgh television station had shown a teaser for an upcoming investigative report that was to air later in the week. Brent was shown coming out of a local adult bookstore. According to the teasers, the reporter had “uncovered illicit, possibly illegal, activity by a local minister, activities which, at the very least, violated the rules of his denomination.”      Later on, details about a man that he’d had an affair with came to light. It appears this man set Brent up to be exposed by an investigative reporter. Before the report was to be broadcast, Brent disappeared. Undoubtedly because he did not want to face public humiliation, he took his life in an obscure motel room. The station never aired the report.

In notes left behind, Brent confessed of not being worthy of a funeral, a suggestion ignored as the church’s sanctuary and fellowship hall overflowed with those of us mourning. A long line of robed clergy, led by a bagpiper, processed into the service. Tears flowed freely as his friend, the Rev. Jean Henderson, read a letter she’d written to Brent. Presbytery executive Jim Mead also spoke of how he appreciated Brent’s ministry and told of the grief all in the presbytery were experiencing. Portions of Brent’s letters to the church and his colleagues in presbytery were read. He confessed how he’d struggled with his sexuality and how he’d been lonely. He encouraged the congregation to step up for the fall stewardship campaign and encouraged his colleagues in ministry to lead holy lives. After the service, I wanted to be alone for a bit and walked some of the streets I’d walked with Brent years earlier. They now seemed so empty and lonely.  I realized I didn’t know the depths of Brent’s loneliness.

I’ve spent many hours over the past months wondering about Brent and the issues surrounding his death. We’re all a part of a broken humanity; we all have issues with which we struggle. Why did he not reach out to someone? Did his desire for excellence keep him from displaying his struggles and brokenness? Did Brent forget that God, the one whose love he often proclaimed to others, also loved him? Did he succumb to the Evil One’s great lie, that because of his actions God had abandoned him?

I’ve also wondered if there is any meaning to Brent’s death. From the side of Brent I knew, he would be disappointed if his death became a rallying cry for a political agenda within the church. Brent loved the church and he loved his Savior and he was content to serve both and tried to stay out of the political battles. The good news was too important to be overshadowed by political agendas. Grace is important; yet when things were crashing in on him, Brent seemed unable to find the grace he needed.

There were scores of us hurt in that Brent, who had helped so many, wasn’t able to talk to one of us about his struggles. Not knowing about his secret life, I wonder if I missed important clues that might have opened him up to the healing and wholeness that he spoke of for others. Ultimately, I had to admit there was a part of him that I didn’t know. But that doesn’t diminish the pain. He’s no longer available to be that trusted friend with gentle counsel.  He’s no longer there to share a joke, to celebrate an accomplishment, or to grieve a loss. Yet I am grateful for having known Brent and for all that he taught me and for the way he modeled grace and unselfish service for the kingdom.

The world is a sadder place in his absence. Without him, I must depend even more on God’s grace, which I suspect would have also been Brent’s counsel.  I wish he could have received such advice.