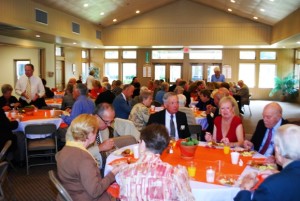 As I have been doing for my past two sermons, we’ll continue to look at a section of the covenant that exist between me and the congregation.  The third part of the covenant is a shared ministry.  Ministry is something in which we all participate.  I hope you have viewed this shared covenant; if not, check it out online or stop by the office for a copy.[1]  Much of this section of the covenant in which I refer to today deals with our assigned task in carrying out the various aspects of ministry: pastoral care, outreach, mission and education.  We’re all in this together! In the sermon, I want us to focus on the church’s main mission as set forth by Jesus Christ.  We are to be his witnesses and to make disciples.[2]  We are to invite people into God’s kingdom!  If I was to speak of evangelism, many of you will cringe and have visions of knocking on strange doors or preaching on a street corner.  So let me rephrase our purpose.  We’re to invite people to a party.  We know how to party, to have a good time and so did Jesus.  He was always at dinner parties and he describes heaven as the ultimate dinner party, the heavenly banquet, the grandest homecoming ever!  Doesn’t it sound better to invite people to a party instead of beating them over the head with the Bible?  Of course, we must make sure it is the right kind of party. Our passages from Scripture today both speak of parties—one good and one bad.  In our reading from the Hebrew Scriptures, we learn of an atrocious party in the wilderness.[3]  The Hebrew refugees from Egypt celebrate after they’ve molded the golden calf.  This is kind of like the “Burning Man” festival, which occurs over Labor Day weekend every year in the Black Rock Desert of Nevada.  This passage reminds us of how we, as a part of the human race, are willing to sacrifice for the wrong things!  The Hebrew people took off their jewelry and gave up their treasures in order to have a “false god” in which they could see.  Of course, God’s envoy, Moses, crashes the party and refocuses the people’s attention to the one responsible for their deliverance. In our New Testament reading, we’re going to hear about another party—the heavenly banquet.  This parable is an allegory.  The king clearly represents God, the son for whom the party is thrown is Jesus.  Those who send out the invitations are prophets and missionaries, and those who reject the invitations are those who refuse to hear the gospel.  This parable is the third of three parables in which Jesus attacks the Jewish leadership in Jerusalem.  In all three, there’s a foretelling of the church, of God’s attempt to invite everyone (including gentiles) into the kingdom.[4]  But this parable has a different twist.  There’s a catch.  Not only is this good news for those of us who are not children of Abraham, but there is a warning about coming to the party unprepared.  Let’s look at the text… (Read Matthew 22:1-14)