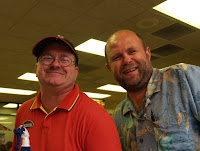 This is Reformation Sunday and, as I am fond of mentioning, one of the most important doctrines to come out of the Protestant Reformation, especially when it concerns how we “do church” is the “Priesthood of All Believers.”  I am not trying to put myself out of a job, but you don’t need a professional to connect to God.  You can do that yourself.  Now, in the defense of clergy, it is helpful to have those who have some additional training and have been called by God to shepherd those within the Christian family, but all of us has direct access to Almighty.  In the Old Testament, you had priests who bridged the gap between the human and the divine.  But Jesus, as our High Priest, bridges that gap, allowing us all access.  This mean that my prayers are no more valid than yours, so when you pray for good weather for your next picnic and a storm brews up, don’t assume that I could have done any better. Today, I want us to see this passage through the lens of “Shared Leadership,” which is the fourth item in the covenant that exists between me and the congregation.  Again, if you have not yet read the covenant, you can do so online[1], or see me and I can get you a paper copy.   In the Presbyterian Church, the pastor and the elders make up the leadership team (the Session) who work together to define and articulate the congregation’s vision and implement its ministry.  But as leaders, we’re all servants: servants of the congregation and, more importantly, servants of our Lord Jesus Christ. In our passage, Jesus and the disciples along with a crowd of people are heading toward Jerusalem.   Right before our reading, Jesus pulls the disciples off to the side and tells them that he’s going to Jerusalem to die.   Matthew doesn’t tell us what the disciples’ reaction was, instead follows this story:  Mrs. Zebedee comes to Jesus with a request on behalf of her sons.  Pride and jealously are often the opposite sides of the same coin, as we will see here.  We must let Jesus in so that he can rearrange the priorities of our lives in a godly manner.  Read Matthew 20:20-28…