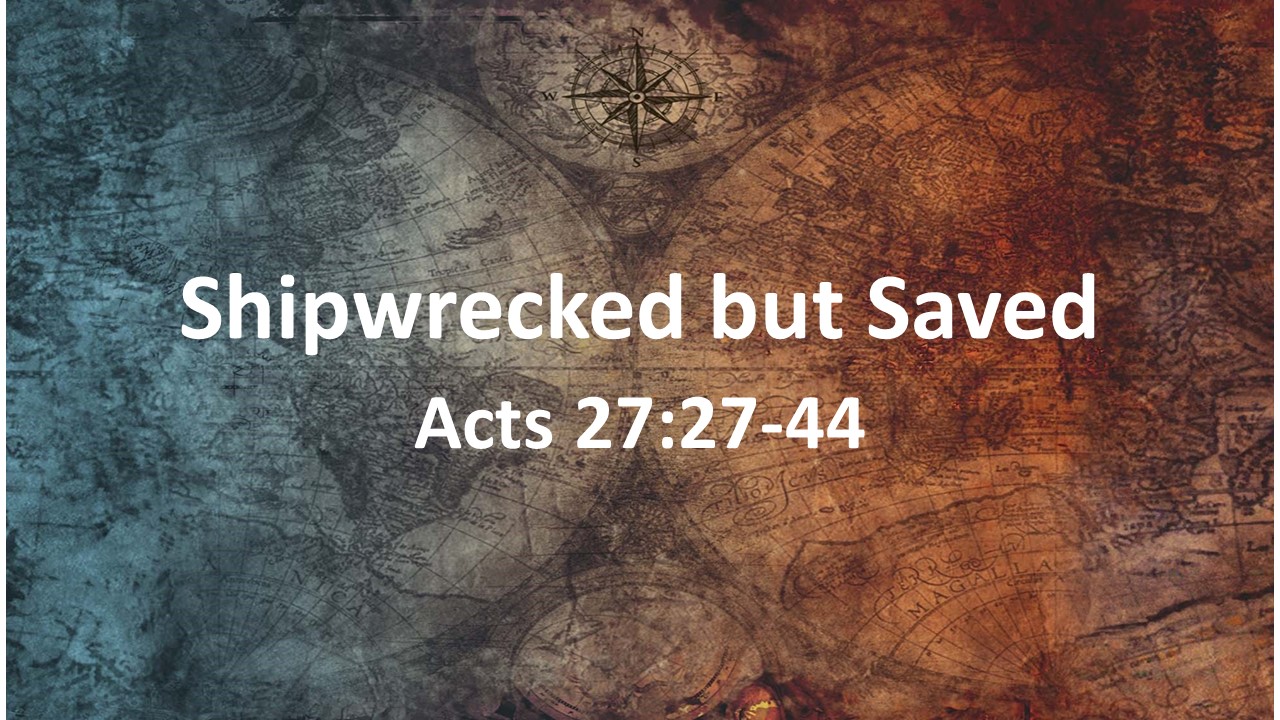 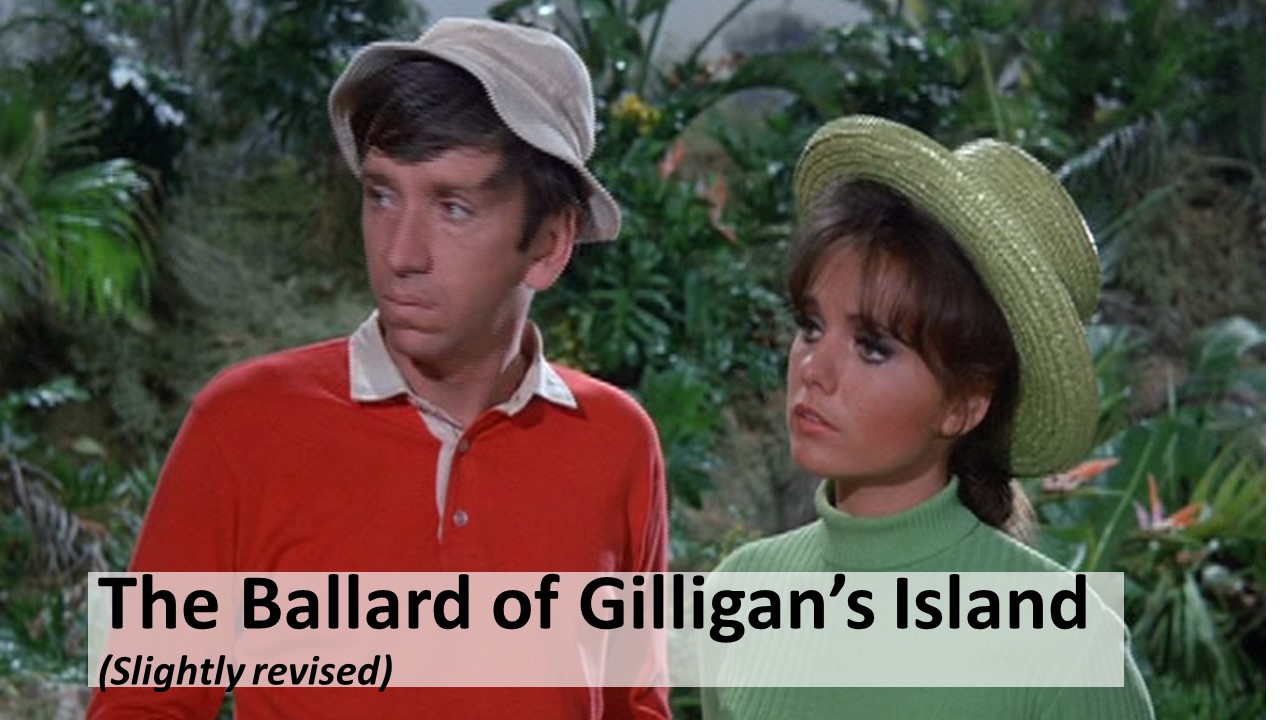 Today we’re reminded of God’s presence, even in the midst of the storms of our lives. But before we get to that, let’s again call on our own Gilligan and MaryAnn (Gene Pinion and Mary McKee) to set the stage as they present the slightly revised parody of the “Ballard of Gilligan’s Island.”

Just sit right back and you’ll hear a tale,
A tale of a fateful trip,
That started from this tropical port
Aboard this tiny ship.
The mate was a mighty sailin’ man,
The skipper brave and sure..

The wind began to howl one day,
the sailing ship was tossed.
If not for the prayers of Paul to the Lord
all members could be lost.

So join us here next week, my friends.
Be sure to hear the facts,
as Pastor Jeff completes the tale of the marvelous book of Acts.
The Acts of The Apostles….
and nothing rhymes with apostles! 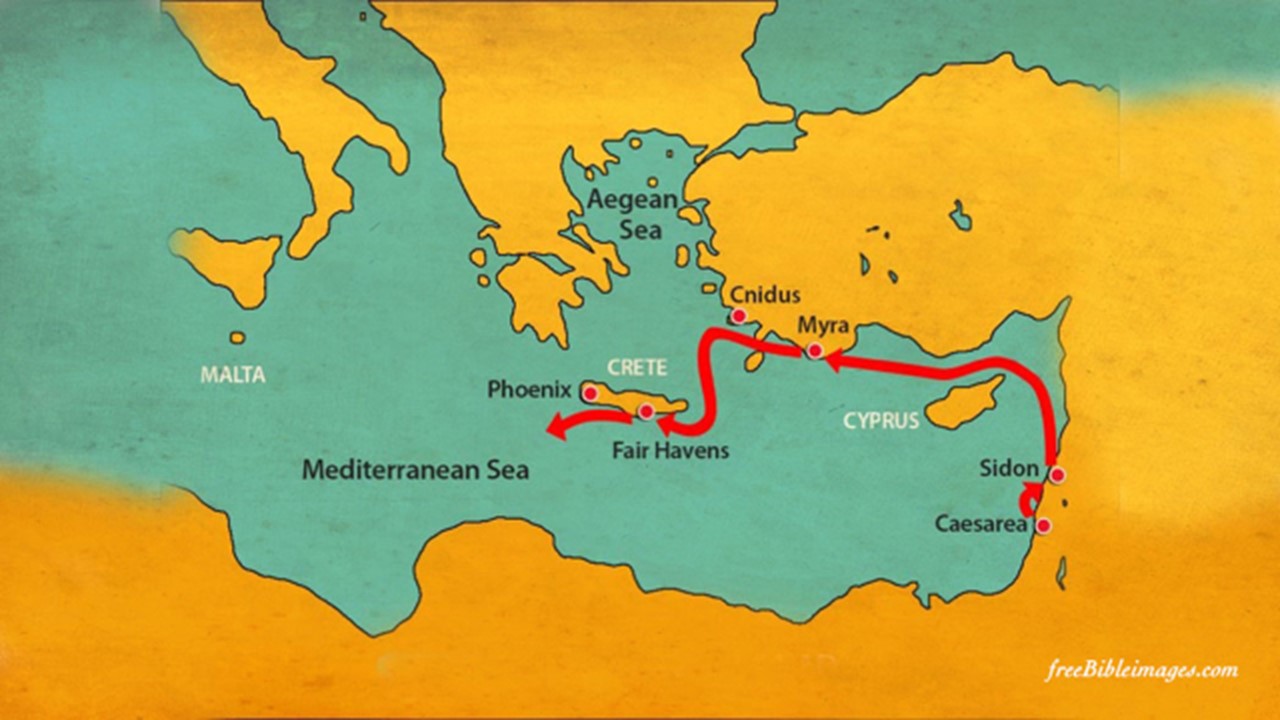 Last week, we left Paul and his companions on a boat as they were sailing from Fair Haven, on the west end of Crete. Those in charge of the boat (actually a ship for we’ll learn there are 276 people on board), decided they’d like to move to the east side of their boat during winter. This was when shipping on the Mediterranean became too dangerous. But as they make their way along the south of Crete, “the gales of November came early.”[1] Their ship is blown off course. They are unable to turn it around and make headway against the wind. The storm was so bad, they can’t see the sun or the stars. They have no way of navigating and are unsure where the wind is taking them. 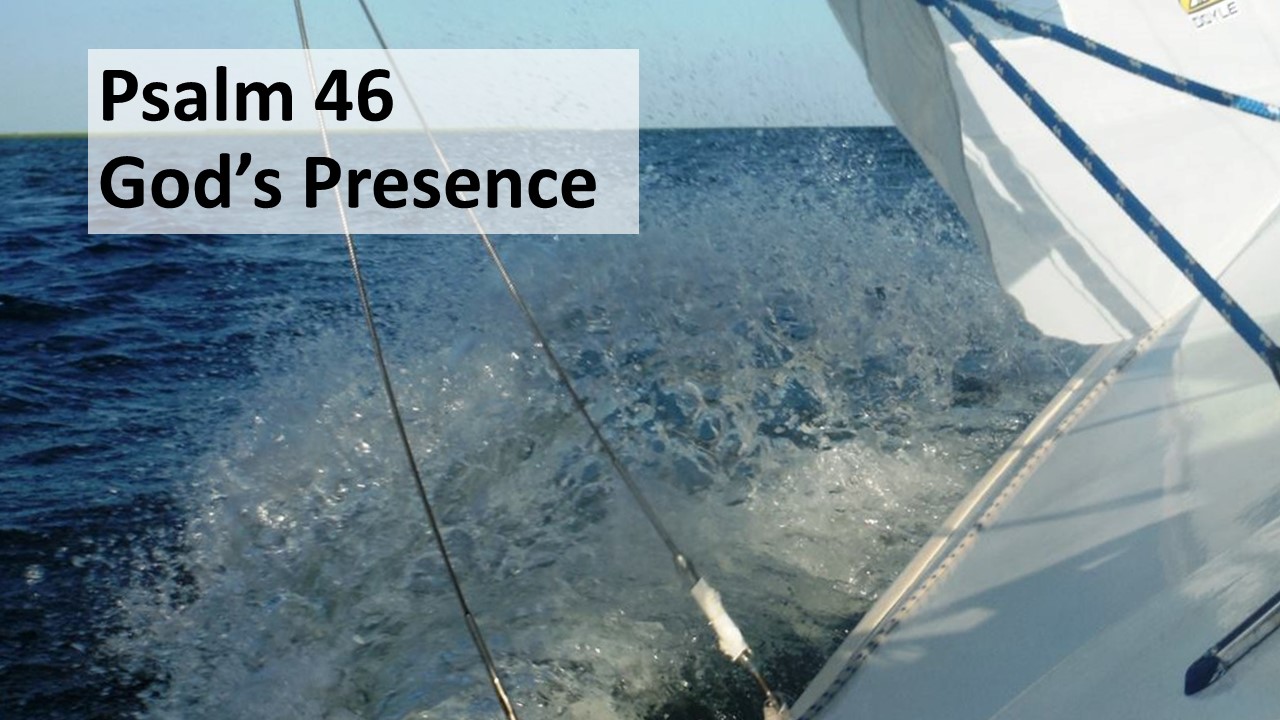 The 46th Psalm, which was read earlier, describes how chaos often fills our lives. There are natural disasters such as earthquakes and storms on the sea, along with human disasters such as war. Despite all that, we are told that we should not fear, because God is present in the center of it all. The Psalm ends, calling us to take a break from the whirlwind that surrounds us, to sit still in silence and to know that God is with us, that God is our refuge and strength. Paul may have quoted the 46th Psalm to assure his shipmates.

Paul encourages everyone to keep up their courage, telling them an angel visited him during the night. This angel, Paul said, “belongs to the God I worship.” At other places, Paul might have said the angel belongs to “The God of Abraham,” but here Paul is addressing a crowd that is mostly pagan. He refers to God in a way they can understand. The angel, this messenger from God, told Paul not to be afraid. Paul is assured that he will safely arrive in Rome, and that everyone on the ship will survive, even though the ship itself will be lost.

This is where our reading begins this morning. Open your Bibles and read along with me from Acts 27, beginning with verse 27 through the end of the chapter. 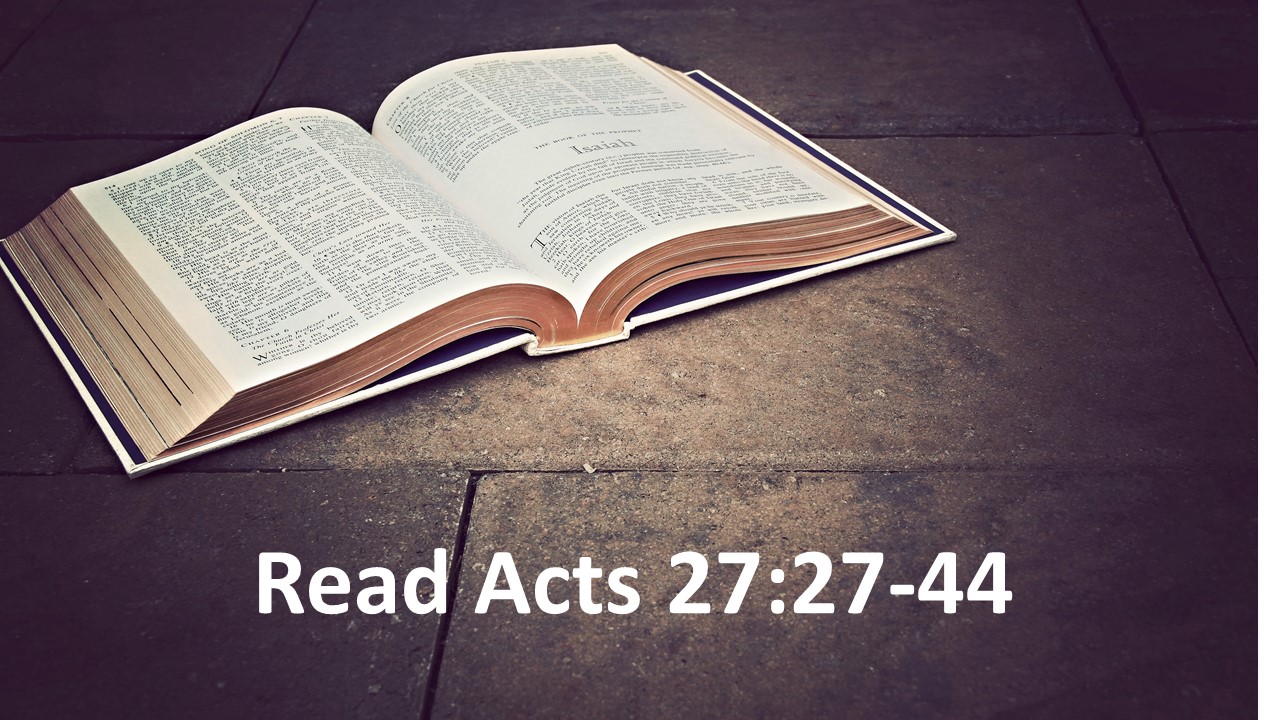 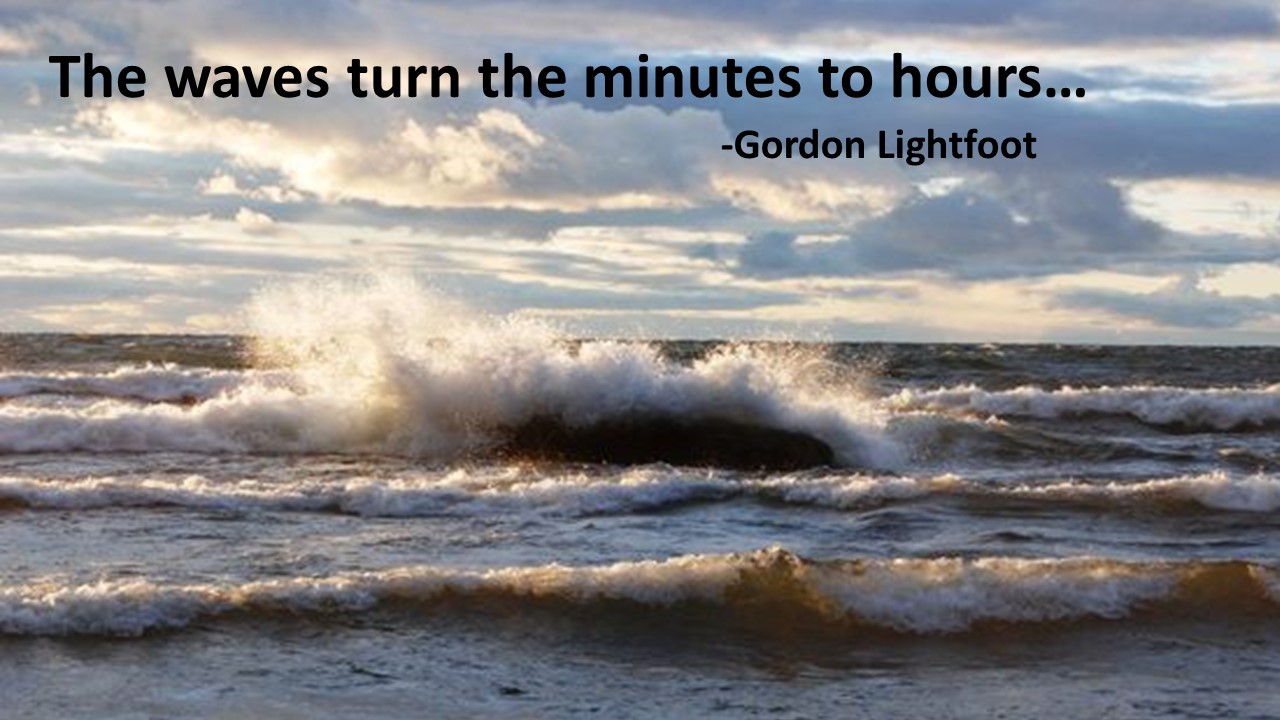 Have you ever been in a position like that of Paul’s shipmates, where you lost hope? Where, in the words of Gordon Lightfoot, “the wind and the waves turn the minutes into hours.”[2] I hope not. But if you have, I hope there was someone like Paul beside you. When itis dark and hope fades, we need encouragement. We need someone to challenge the despair and remind us of God’s abiding love? By the way, this is what the church is to be about. We’re to offer hope when all appears lost. We’re to be the voice crying out in the storm, encouraging everyone to trust, to have faith. We can do this because we worship a Lord who was, as we say in the Apostles’ Creed, “crucified, dead and buried.” But that’s not the end of the story. The creed doesn’t end there, it continues, “On the third day, he rose from the dead…” 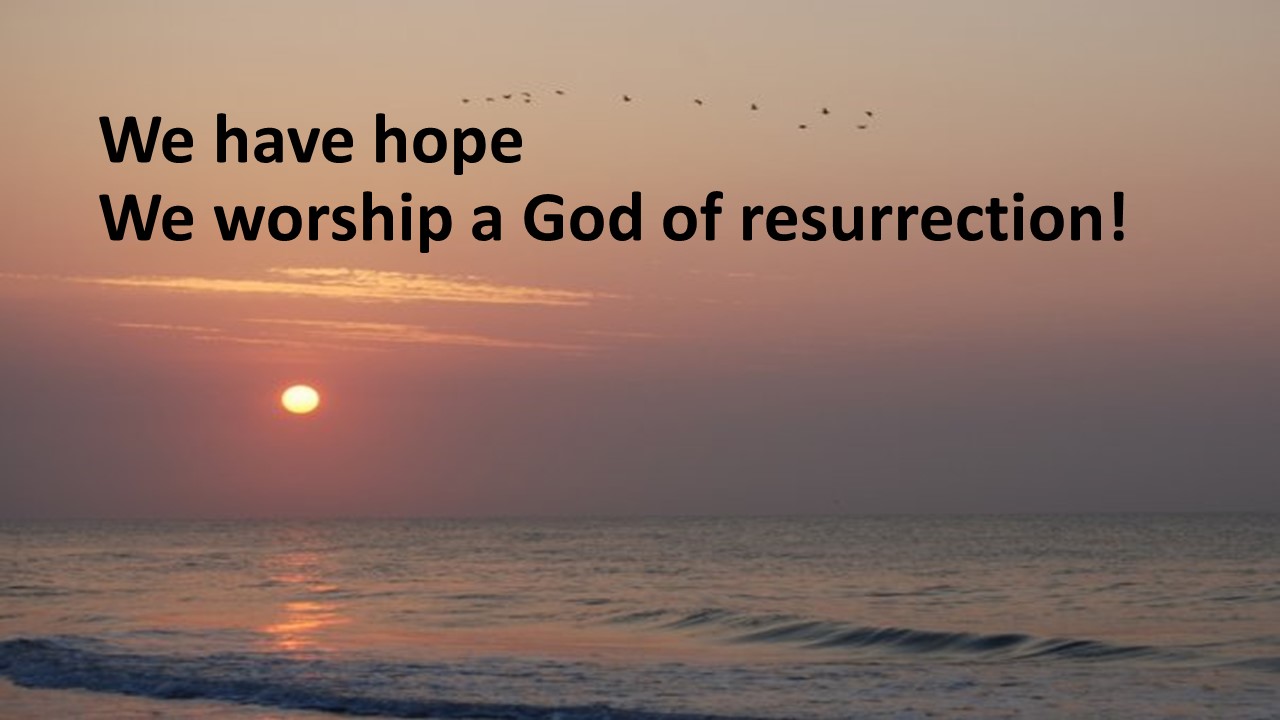 We have hope because we worship a God who raises the dead! We have hope because our God created this good world, and although the devil and his minions may challenge God’s reign, God is still in control. God is all powerful, but more than that, God is good and just, loving and graceful. As part of God’s family, we have no reason to fear. We have hope, eternal hope.  Yes, bad things may happen (and they do), but in the end God holds us in his loving hands. This goes for us as individuals as well as congregations and denominations. Not everything that happens is good. And that’s okay. After all, if the church was that perfect, where only good things happen, they wouldn’t have any of us as members. 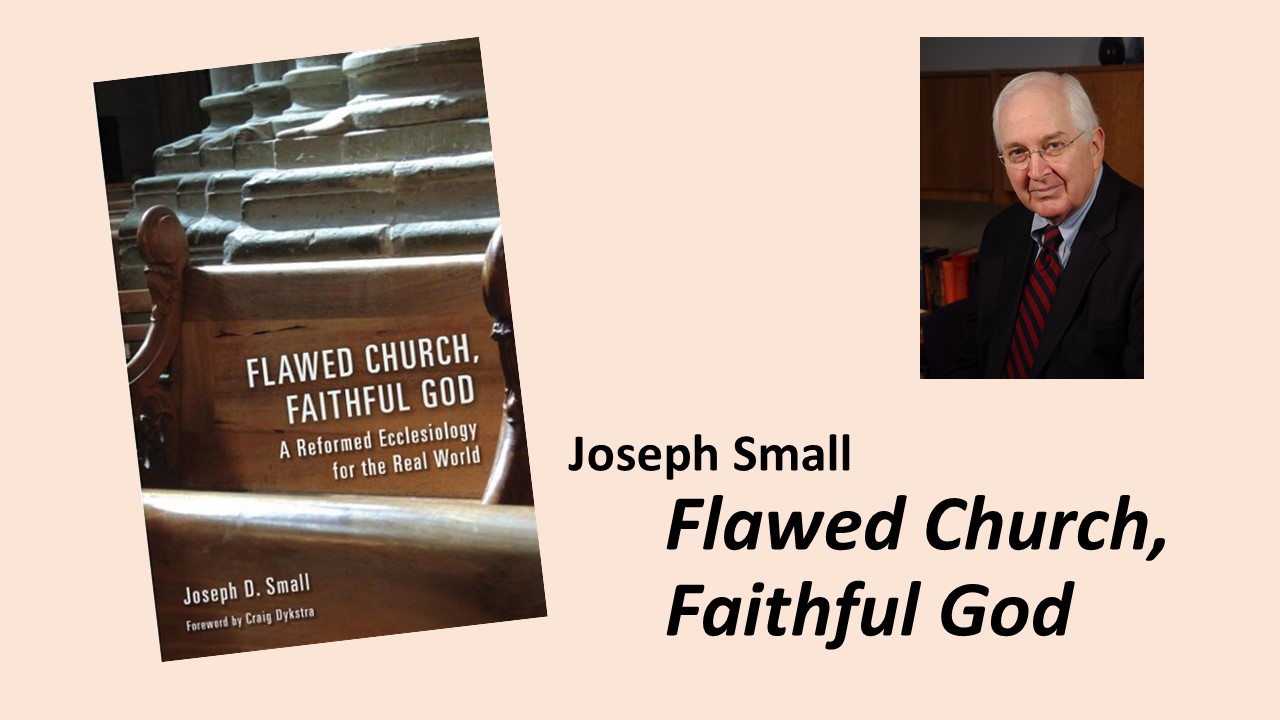 Recently, I’ve been reading Joseph Small’s wonderful book on Reformed Ecclesiology, Flawed Church, Faithful God.[3] Ecclesiology comes from the Greek which blends together “word” and “assembly” to create the Greek word for church. Add to that the –ology ending, meaning study, and we have ecclesiology is the study of “church.” Small’s title—Flawed Church, Faithful God—says it all. He captures an essential truth about the church. We’re flawed, we’re not perfect, but we have been brought together by our faithful Savior Jesus Christ and while we struggle to get it right, we follow one who gets it right. So today, as we recall the past, and all the good times we’ve enjoyed, don’t make the mistake to confuse the past with the kingdom of God. For we, the church, is being called forward into a new kingdom where the redeemed in Christ will live eternally. But, like Paul in our story today, we’re still on a journey. There’ll be good days and not so good ones. 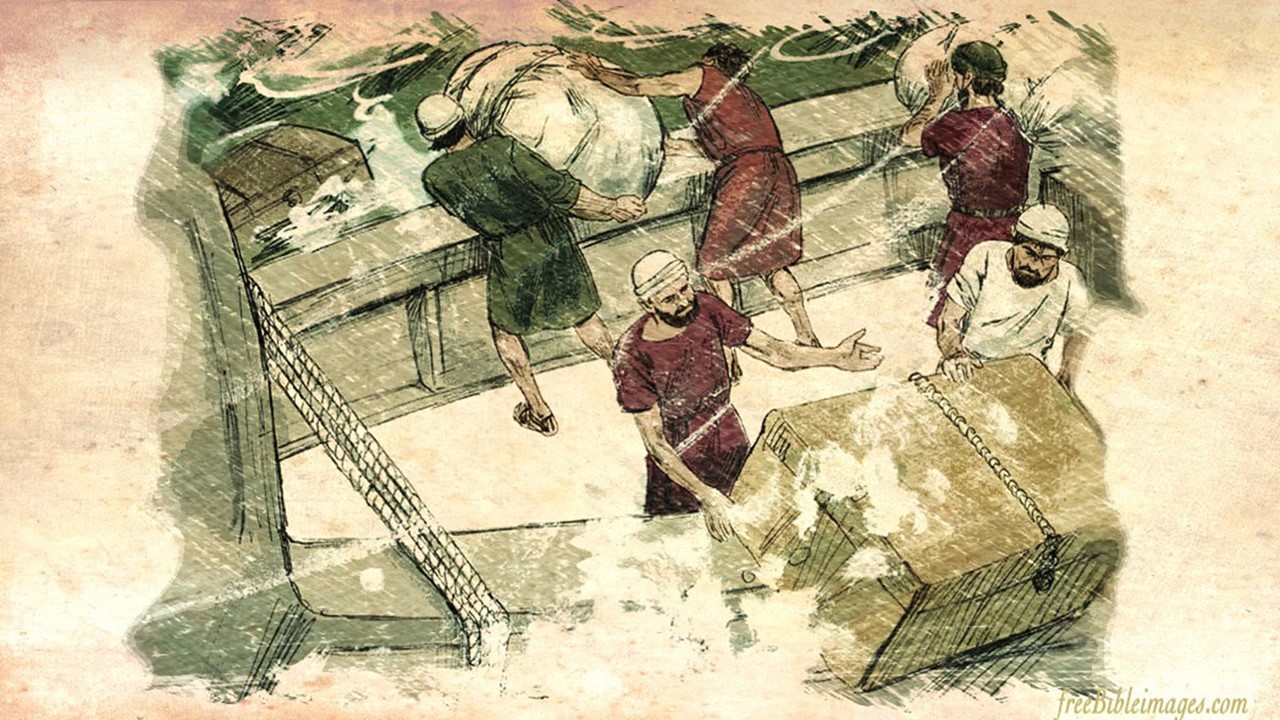 Let’s explore our text. Paul and his fellow shipmates have been at sea for 14 days. It’s been stormy and the winds have pushed them far off course. They’re no longer envisioning a nice winter in Phoenix. By reducing their load, they’re just hoping not to capsize. Seasickness is rampart. People aren’t eating. Everyone, it seems, have given up. Everyone except for Paul. Paul’s the cheerleader. 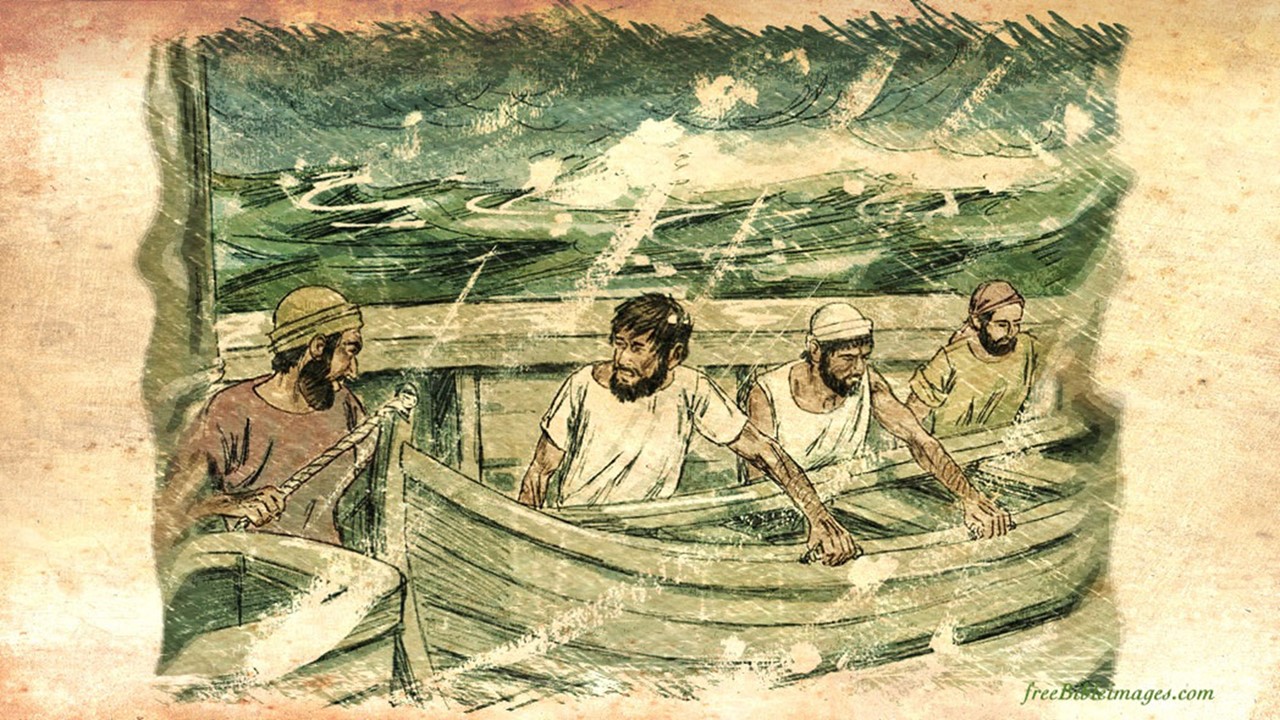 Finally there is some hope. In an era without depth finders, they drop a weight on a string overboard to take a sounding. They realize the water is now only 20 fathoms, or roughly 120 feet. They drop it again, and it’s only 15 fathoms. Although it’s night, they sense land must be near. The sailors dropped anchor. Interestingly, instead of dropping anchors off the bow, as is generally done so the vessel can swing into the wind, they drop four anchors off the stern. Perhaps this caught Paul’s attention, and alerted him that something wasn’t right. For when sailors lower a boat into the sea for the said purpose of setting an anchor off the bow, Paul’s alarmed.  In the middle of the ocean, this doesn’t make sense, for you want the ship to be able to move and stay into the wind, lest you risk swamping the vessel with a rogue wave. Paul goes to his friend, the centurion, whom we met last week. Remember, he’s a good guy. Paul tells him that he thinks the sailors are going to abandon ship to save their own necks, so the soldier cuts away the lines holding the boat. Now everyone is stuck on the ship. 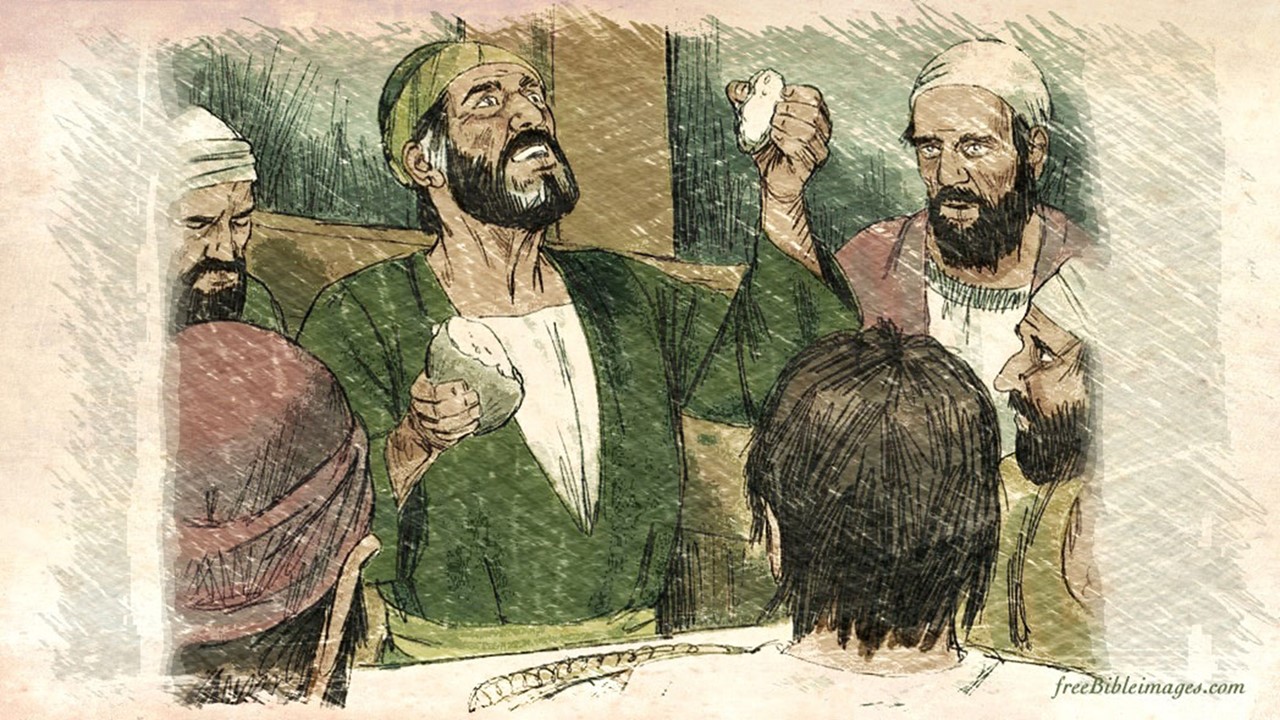 Then, in the early dawn, just before daybreak, Paul encourages everyone to eat. We have essentially a communion service here, except that there is no mention of wine. But the language is similar. Paul gives thanks for the bread and then gives it to everyone, all 276 of them, and they eat.  And as they are eating, Paul reminds them that they’ll not lose a hair from their head—quite a promise for a group that has been floundering at sea for two weeks. 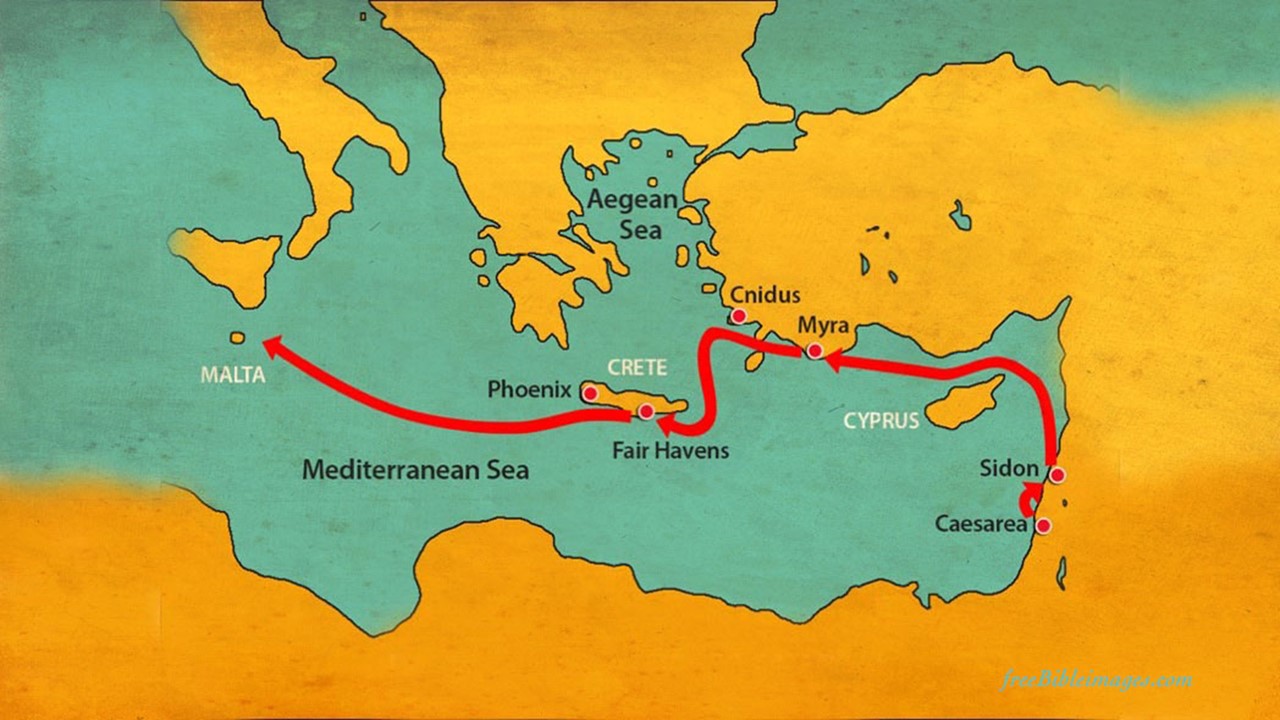 When the sun rises, they find themselves off an unfamiliar land. They cut the anchors, hoist a foresail, and are blown toward a bay. All seems to go well. It looks like they’ll be saved. THEN, they strike a reef. The ship begins to break up. Salvation was so close, now it seems it’s so far. Once again they are in peril. And there is another problem, one even more ominous. 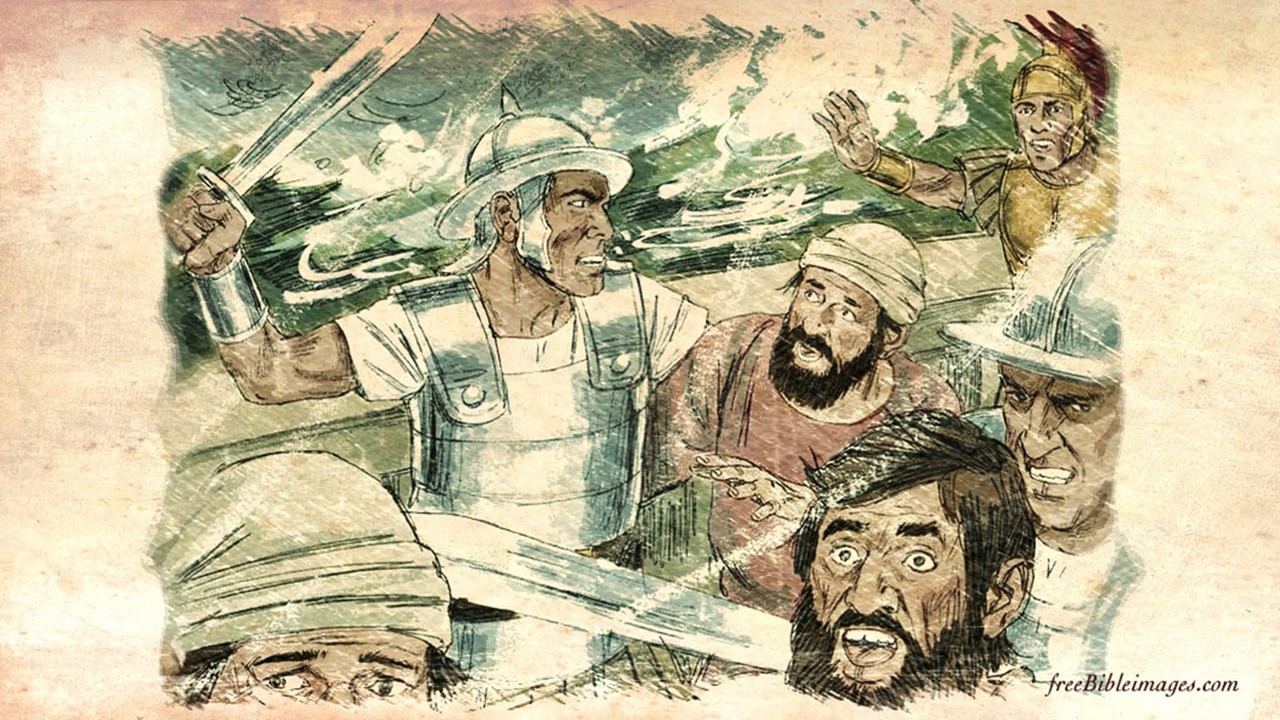 The soldiers, we’re told, plan to kill the prisoners. They fear that if they the prisoners swim ashore, they’ll escape. If that happens, they’re in trouble. They, themselves, might face death. Remember the jailer in Philippi, who had Paul and Silas locked up. When that earthquake opened the doors of the prison, he was going to commit suicide, for he was afraid that his prisoners had escaped.[4] Letting prisoners escape was a serious thing in these days. 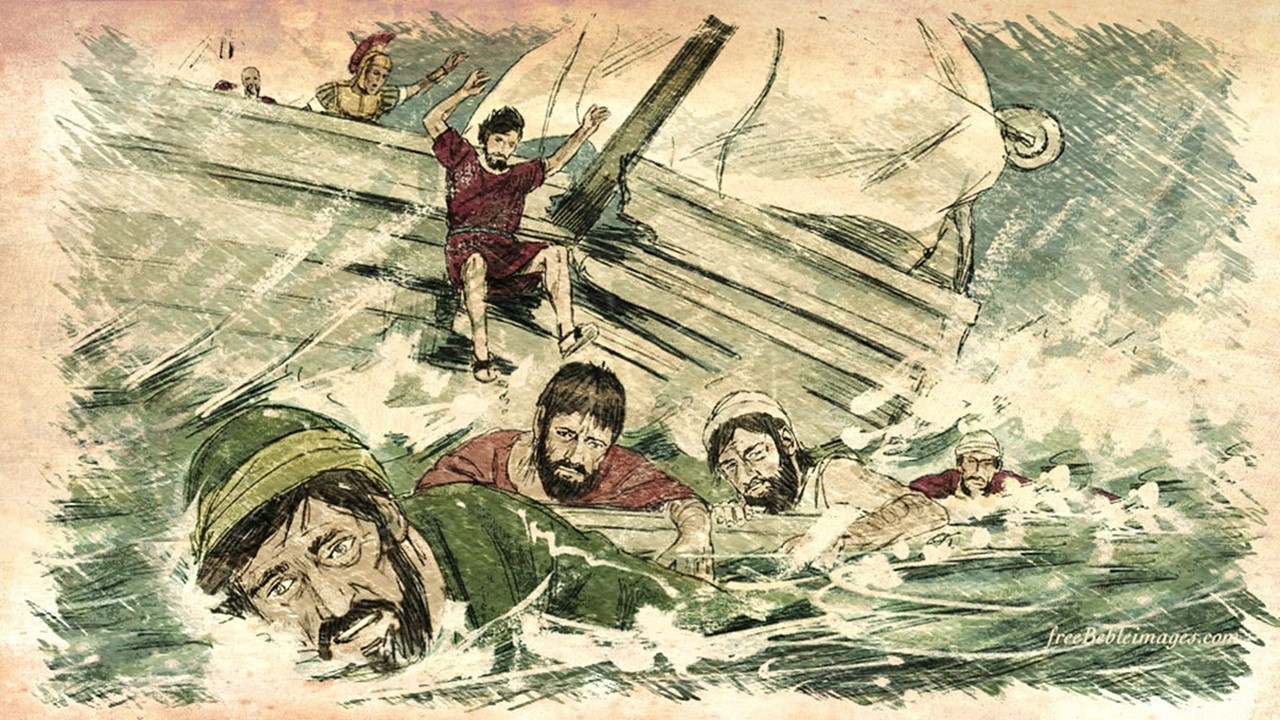 Thankfully, again Paul’s friend, the centurion, intervenes. So those who can swim, jump in and head for the beach while others float on wooden pieces of the boat. As Paul predicted, the ship is lost but all souls are saved. 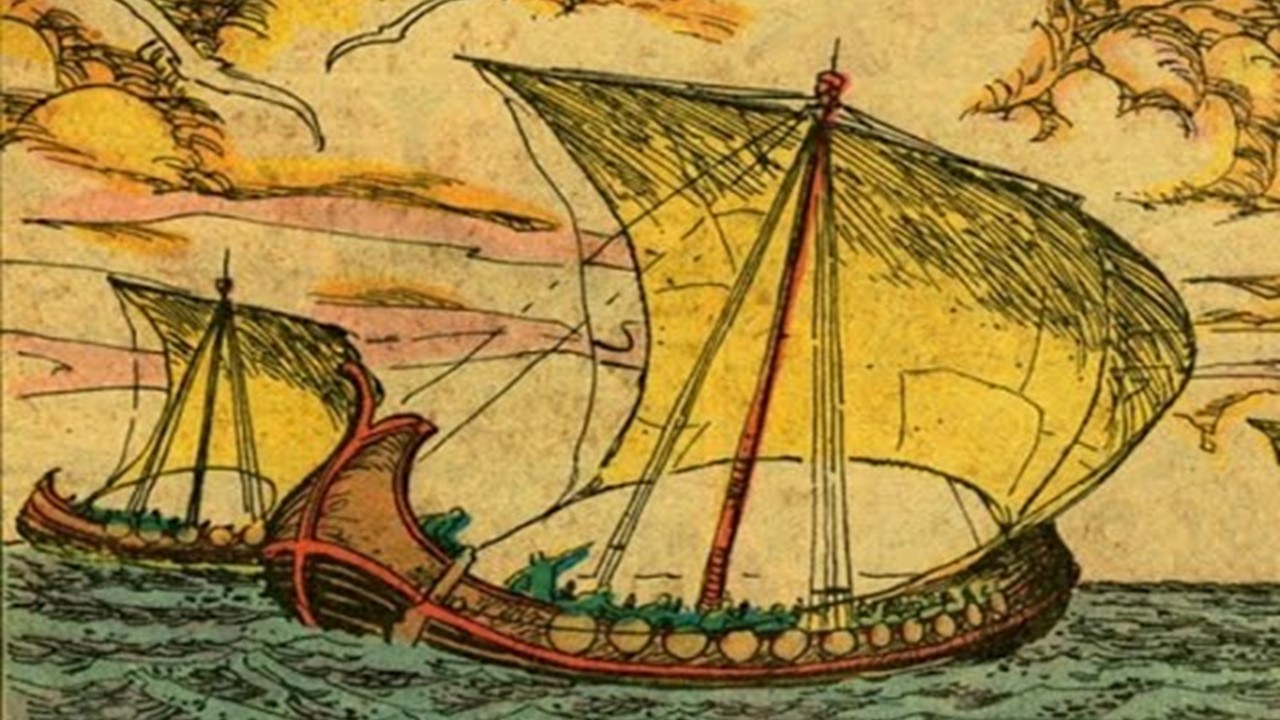 Last week, I told how this story stands in in the tradition of that ancient genre of seafaring stories. But here, the ending is in contrast to some of the other stories of the day. In the Odyssey, only Odysseus survives. His crew perishes. By saving not just Paul, but everyone, Luke tells the story in a way that reminds his readers of the power of God, a power that extends not only over the sea, but far surpasses the power of the gods that others worship. We also learn of God’s desire to save.[5]

This story teaches us that while God desires to save us, there are going to be bumps and storms along the way. Yes, Paul is supposed to go to Rome to preach before Caesar, but getting there is not easy. There are things God wants us to do, as individuals and as a community, but that doesn’t mean those things will be easy. As the church, as Jesus’ body in the world, we are called to endure and to be a beacon of hope.

After a week like this past one, with attempted bombings of political figures and a mass killing in a Jewish synagogue, one of the things we’re called to stand up to the hate. As people of God, we’re to show the world a better way, a new way of relating to one another. But it’s not easy. It takes faith. It takes courage. 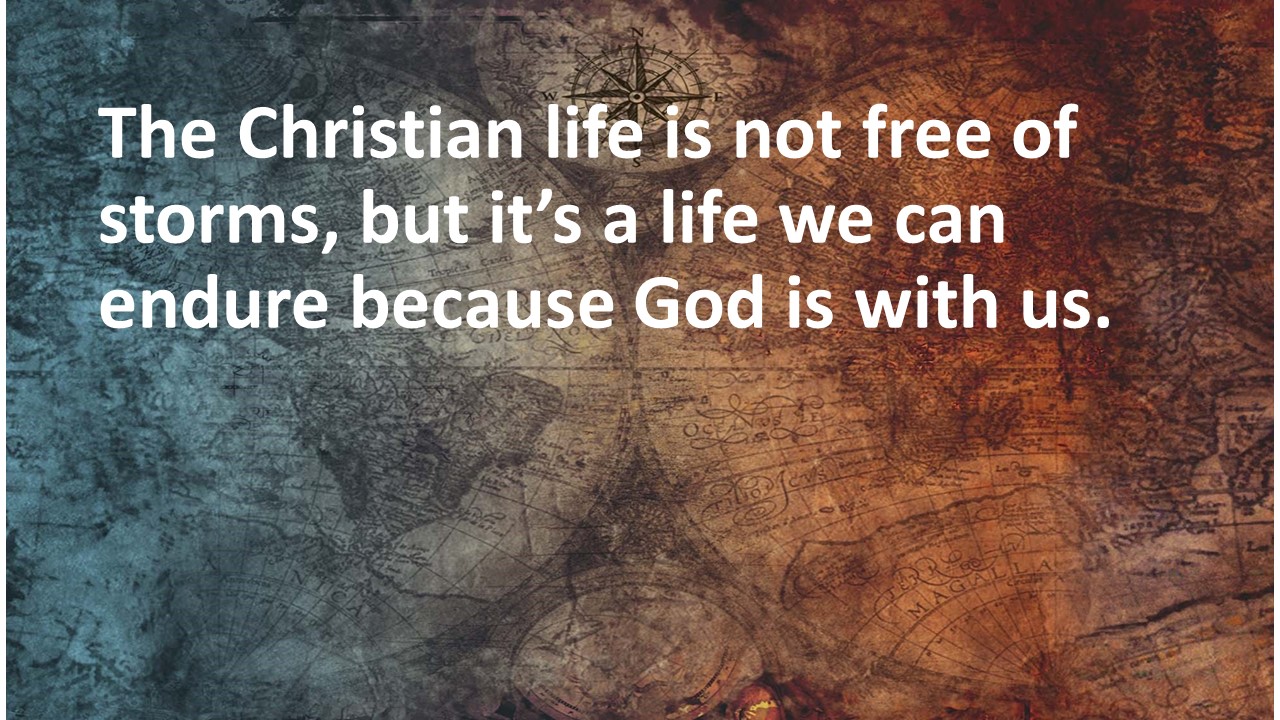 Our final hymn, which we’ll sing in a few minutes, reminds us that the church exists “‘Mid toil and tribulation…” Things are never easy. But the hymn continues, reminding us the church waits for the fulfillment of the kingdom, for “peace forever more.”[6] The Christian life is not a life free of storms. It’s a life where we endure the storm because we know God is with us and because we know the future. God is going to be victorious over death and evil. In the meantime, we take hope in Jesus’ words that he’ll be with us until the end of the age.[7] We remind ourselves, as we heard from Psalm 46, that God is present even in the middle of a storm. These promises should instill confidence for us to live boldly into our next forty years. So be it. Amen.