Next Sunday is the day we make our commitments to support God’s work through Skidaway Island Presbyterian Church for the next year.  Our Stewardship theme is “Sowing Seeds of Hope.”  This week and next I will preach on parables about agriculture-sowing seeds.  Farming is often referred to as a great gamble.  Yet, farmers are hopeful as they plant their crops, trusting in the Lord for sunlight and warm weather and moisture, things of which they have no control.  In such a manner, we’re like farmers.  Even the Apostle Paul saw himself in this way: “I planted, Apostle watered, God gave the growth.”[1] There is much to be hopeful and thankful as we strive to grow and build this faith community by proclaiming God’s Word and living in a manner that brings God glory. We’re exploring the parable of the rich but foolish farmer.  It’s a story of priorities.  Who do we trust?  Where do we place our faith?  Interestingly, this story is told right after someone asks Jesus to intervene in a family dispute over inheritance.  Jesus refuses to get involved, and then tells this story.  Let’s listen now to the Master as I read from the twelfth chapter of Luke, starting with verse thirteen.  (Read Luke 12:13-25). 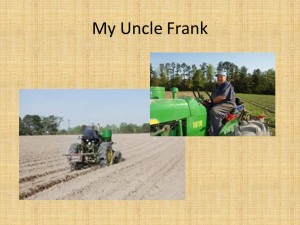 Whenever I think about a farmer, I envision my Uncle Frank.  It’s been a couple of years since he died.  Frank raised tobacco and was good at it.  He expanded the number of fields and barns and worked hard during the summer to raise and cure the golden leaf.  As he got older and the tobacco market declined, Frank leased out most of his land and retired.  Well, kind-of retired.  He’d farmed the same ground all his life.  He grew up on that land and there must have been something in the dirt that was addictive as Frank was not able to let it go. In his retirement, Frank started raising strawberries.  Then he added sweet corn and peas and beans and tomatoes and watermelons and other crops.  There were two old tobacco barns he used the cure tobacco, out near the highway.   He converted them to a produce stand, air conditioning the barns where he stored that which he grew.   The tin roof shed between the barns, where tobacco used to be tied on sticks, became his showcase for produce.  The whole operation was under the shade of pecan trees.  There were a few rockers sitting around where people could cool off and enjoy a Coca-Cola on hot summer afternoons. I don’t think anything brought Frank more happiness than the knowledge someone was enjoying the fruits of his labor.  The juice from a watermelon or that from a red tomato, cut thick and stuck in between two slices of bread slathered with mayonnaise, running down the chin of a “youngin” made it all worthwhile.  The knowledge that some people drove 20 miles out of their way just to purchase some of his sweet corn was satisfying.

It seems appropriate that the last time I saw Frank, when we were visiting North Carolina just a few months before his death, he was on top of a John Deere, planting peas. Frank was not at all like the guy in the story Jesus told.  Although I’m sure Frank struggled with greed, as we all do, he was a bighearted man.  I believe it was his love for the land and the happiness his produce brought to his costumers and not the money it put into his bank account that kept Frank farming well into his eighth decade.  Furthermore, Frank generously supported his church, was always known to help out neighbors in need, and was one of the first to step up to support a worthwhile community endeavor.

We’re not told much about the farmer in our story today.  All we know for sure is that he was successful.  He had been blessed with fertile land, cooperative weather and a bountiful harvest.  That’s good. We’re to enjoy the gifts from God’s creation!  He built barns to store up his excess.  That’s not necessarily bad, as we saw in our Old Testament lesson.  If Joseph hadn’t built barns and silos in Egypt during their seven years of plenty, they’d all starved during their seven years of drought.[2]  So what’s the problem here…  Why does God call this man a fool?

I have a feeling this man is incredibly lonely.  Interestingly, in the parable, he only talks to himself.  “I’m going to do this and that,” he says, but he’s the only one around.  He takes credit for all that he’s done, forgetting others who are partly responsible for his blessings.  There were the laborers who prepared the fields, who chopped the weeds, and who helped harvest the crop, all for the chance of having a full belly at the end of the day.  I’m sure they received their portion, but the man doesn’t acknowledge he’s dependent on the sweat from their brows…  Next, there were the carpenters who sawed the wood and lifted up the beams and built his barns.  We can assume they, too, were paid, but their contributions are overlooked by the man in the story.   And then there is the one who sends the rain and the sun and who gives the harvest. [3]  The source of his blessings is also ignored. Yet, we’re also not told that the man’s death is punishment.  I don’t think it was.  It seems to have just been his time.

Death is something we will all confront.  Steve Jobs, the founder and leader of Apple Computer, in a commencement address at Stanford a few years before his death, acknowledges this:   No one wants to die. Even people who want to go to heaven don’t want to die to get there. And yet death is the destination we all share. No one has ever escaped it. And that is as it should be, because Death is very likely the single best invention of Life. It is Life’s change agent.[4]

Think about the prospect of death as a change agent.  The knowledge of our humanity, our mortality, should help us focus on that which is important.  We can learn from this man in the story, which is why Jesus told it.  But too often, perhaps because we have tried hard to erase death from our minds, we ignore it.  The man is not called a fool because he was rich and didn’t share of his blessings, for we don’t know that.  For all we know, he may have been very generous.  Nor was he called a fool for hoarding the bounty of his fields.  After all, if someone doesn’t store up food, we’d all starve during a year of drought or floods, and this was especially true at a time when buying produce on the world market wasn’t an option. Instead, the man was called a fool because he was not living for today.  Instead of enjoying today, and receiving it as a gift from the Creator, he was making plans to enjoy tomorrow.  As we all know, but may not want to admit, tomorrow may not be.

This farmer worried about how he could store up his crop so that he could kick back and relax or party sometime in the future.  He thought he had everything under control, but he over-reached.  Like us, he was mortal.  Life is a gift from the Almighty, not something that he (or we) can control.  Yes, we can and should take care of ourselves (we should even plan for tomorrow), but we can’t bank on tomorrow’s sunrise so we better make sure we appreciate today. I should reiterate again that there is nothing in this passage that suggests this man was immoral or he had prospered from unjust actions or had been dishonest with others which allowed him to gain wealth.  That’s not the problem Jesus addresses here.  Instead, his problem is where he places his trust.  His full barns have become his god; his barns are where he places his trust.  He’s an idolater.  His idol isn’t some stone carving, but a barn and a collection of silos. For us, it might be a bank account, an investment portfolio, or real estate properties.

Looking at his full barns, the farmer thinks his future is secure.  We can look at our accumulation of stuff and also be deceived. Jesus moves from this story to encouraging us not to worry about tomorrow.  Elsewhere, Jesus says they’ll be enough troubles tomorrow to worry over, take care of your troubles today.[5]   “One day at a time,” is a motto our AA friends live by, and it’s a good one.  “Worrying,” as Jesus reminds us, “will not add a single hour to the span of our lives.”[6] Life can be trying.  We can live by fear and be anxious and strive to assure our future by hoarding and in so doing isolate ourselves from others and God.  But even then, we can’t stop the inevitable.  Sooner or later, we’ll be gone.  At such a time will we be known for what we did with the blessings God entrusted to us?    Will our legacies be based on us focusing on ourselves or on trusting God?

As you think about your commitment to our church for 2015, I encourage you to look at your lives from the perspective of your faith in an Almighty God.  Do you trust that God will be with you in the future?  If so, do you live like it?  Do you embrace the possibility each day holds?  Do you give freely and generously?  Do you seek out the fellowship of others?  Are you willing to take a risk, to be a little foolish, not like the farmer who thought he had it made, but foolish by worldly standards which means trusting in God whom we believe wants something more and better from and for us?[7]

Examine yourselves this week.  It’s not too late to start enjoying the life God has given us.  It’s not too late to make things right with God.  It’s not too late, but at some point in the future it will be.   Life is too short to be greedy.   We start this change by placing our trust in God and living for Jesus, generously supporting and working for his kingdom.  None of us know what tomorrow will bring.  What’s important is how we make the most of today and in whom we place our trust for tomorrow.  Being a faithful steward is our choice: Do we trust ourselves and our own abilities?  Or do we trust God?  Amen.