When I was in seminary, there was a debate at how often communion should be served in Chapel. This essay, which I recently came across, has it’s roots in that debate which occurred 30-some years ago. It displays my somewhat skeptic side: 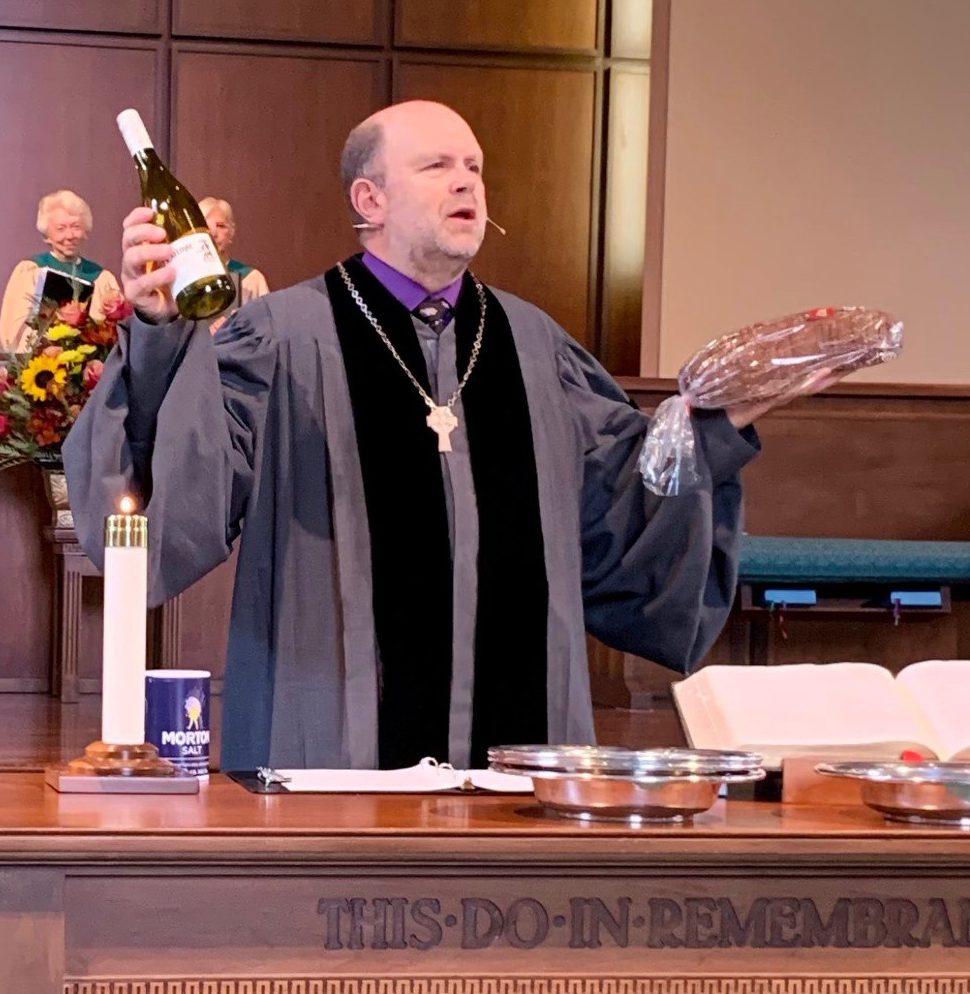 Not exactly a communion photo. This is me giving a blessing taken from the movie “Its a Wonderful Life:” “Bread! That this house may never know hunger. Salt! That life may always have flavor. And wine! That joy and prosperity may reign forever.”

The highlight of Christian worship is the Lord’s Supper. We break bread and share wine together, uniting ourselves through a very ordinary act with all the saints who have gone before us and to Christ himself. It’s a mysterious feast, especially for the stomach that often leaves the meal hungry.

Standing in front of the table, the minister repeats Jesus’ words. “This is my body broken for you. Do this in remembrance of me.” In the Reformation, Protestants and Catholics fought over the meaning of these words—whether or not the bread was really Jesus’ body. Protestant Reformers could smugly point out that Jesus was speaking metaphorically. After all, he also said he was a door and nobody believes he is a literal door, wooden or otherwise. However, from the small portions used, you would think that all churches believed that it was Jesus’ actual body and they must hoard some for future generations. Of course, Protestants like me do not believe the bread is the literal body of Christ, but a sign to remind us of our unity with Christ in his death and resurrection.

The second part of the service involves drinking wine or, as most Protestants prefer, grape juice. The words of Jesus are again spoken. “This cup is the new covenant sealed in my blood, shed for you for the forgiveness of sins.” In the Middle Ages, only priests were allowed to drink the wine because of a fear the common people might actually spill some. Only Jesus was allowed to shed his blood, they reasoned. In some churches, everyone drinks from the same cup, a nice gesture that demonstrate how we all share in Christ. However, the majority of American Protestant Churches understanding that such sharing involves germs; therefore, they use small individual cups about the size of a thimble. Since the women’s movement, most of these churches have begun using disposal plastic cups because no one is volunteering to wash the glass ones.  Ecologically minded Christians are bothered by this, but until they sign up for cup washing, the trend toward plastic cups will continue.

Christians participate in the Lord’s Supper in a variety of ways. Versions of the fast food method are generally preferred. In most Methodist, Lutheran and Episcopal Churches, everyone goes up to the front of the sanctuary and kneels or stands, awaiting their turn to receive the bread and cup. The most common way in Baptist and Presbyterian churches is the drive-in method. You sit in your pews and the elements are brought to you. A take-out plan is generally available for those unable to attend services.

Another method that has become more common is intinction. Each worshiper breaks off a piece of bread and dips it into the cup. This method rapidly facilitates the distribution of the elements, however the Biblical foundation for such a technique is weak. Even the most liberal exegete would have a hard time interpreting Jesus’ words, “take and eat” with “take and dunk.” More problematic for those sharing this method is that the only example we have of a disciple eating dipped bread at the Last Supper being Judas Iscariot.

A hundred or so years ago, it was common for American Protestants to actually sit around a real table and share a feast with others. This method, which had its roots in the Scottish Church, was the formal dining plan. To be allowed a seat at the table, a member had to produce a communion token that he or she earned by being good, paying one’s tithe, not breaking the commandments, and attending a preparatory lecture. As the worshiper approached the table, he or she was greeted by the maître’ d, a role played by an elder of the congregation. Those not tipping with the appropriate token were escorted to the door by the same elder who was also a bouncer. Once the worshipers were seated at the table, they were served a hunk of bread and a cup of wine. This was done rapidly in order to accommodate the next seating. Unfortunately, for all its appeal, formal dining has gone the way of fine china and finger bowls. Few churches bother.

As Christians, we celebrate the Lord’s Supper in order to proclaim the life, death, and resurrection of Jesus Christ. We do this obediently and solemnly. Nobody talks; everyone bows their head. Most believe we are conducting the service in the same manner as Jesus, having forgotten that Jesus instituted this sacrament at the Passover meal in which four cups of wine was served. Unlike the Passover, a modern communion service lasts just a few minutes, after which everyone is still able to drive home.

The celebration of the Lord’s Supper also serves as a foretaste of the kingdom to come. At the heavenly banquet, we will all sit at table with Christ at the head. The Bible doesn’t give us the menu, but considering that four of the disciples were fisherman, maybe it will be a seafood banquet. Or maybe it will be lamb supplied by the good shepherd at the head table. Whatever the menu, the heavenly banquet promises to be livelier than the somber communion services. This is a good thing. Mark Twain noted that if heaven is just sitting around singing hymns, he couldn’t understand why anyone would want to go there. Likewise, if the heavenly banquet is only as exciting as its earthly counterpart, no one will RSVP.

After communion, the minister pronounces the benediction. Like the flagman at Indianapolis, it signals the beginning of a race. Some parishioners rush out to a restaurant. In good Christian competition, they attempt to beat those from other churches to the restaurant. Others head home where the television is the first order of business. After finding the game of the week, one family pulls a roast from the oven while another grills burgers out back. Those without ambition order pizza. Such hearty food is served and, as long as the right team is winning, we laugh and love joyfully. After having fed us at his table, Jesus wonders why he’s not included.