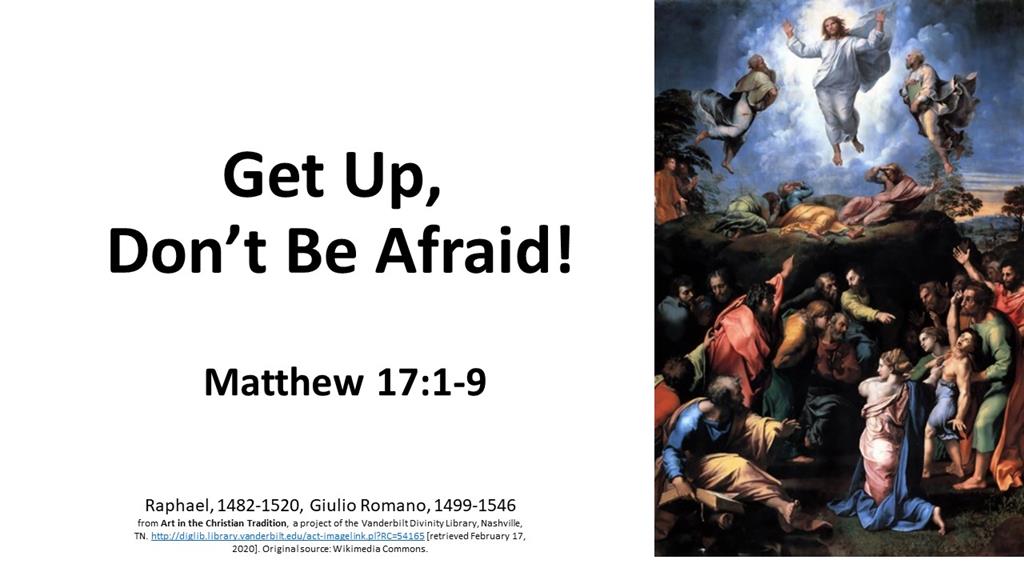 Today, we’re coming to an end of this series on SAD (Spiritual Affection Disease). We’ve looked at several ordinary activities that can be used, beyond prayer and Bible study, to draw us closer to God. Today, we’re going to see that everything focuses on Jesus. Once we encounter the Savior, we need to fearlessly carry out his work.

Our passage is the Transfiguration. These are some verses I’ve often wondered about. Why are they in Scripture?” I’ve asked. “Is this story needed?” This week, I thought about this passage while attending a two-day Theology Matter’s conference on Hilton Head.[1] We considered what it means for Jesus to be the “way and the truth and the life,” In that setting, I began to clearly understand the importance of this text. It points us to Jesus, and to our need to listen to his Word.

The Transfiguration is a mysterious event with which the western church has always struggled. The Eastern Church, the Orthodox tradition, from early in its history, celebrated the event with a feast. In the West, it wasn’t until the 15th Century, right before the Protestant Reformation, that the Roman Catholic Church set aside a special day to recall the Transfiguration.[2] And for Protestants, we came even later to the table. But it’s important that we deal with this passage for it appears in all three of the synoptic gospels—Matthew, Mark and Luke.[3] Let’s listen to Matthew’s account of this story. And as I read this, think about what your reaction to such an encounter might be.  Read Matthew 17:1-8.

There are four questions I want us to explore from this mysterious text. Of course, many other questions may arise, but this morning, we’ll stick with these four: 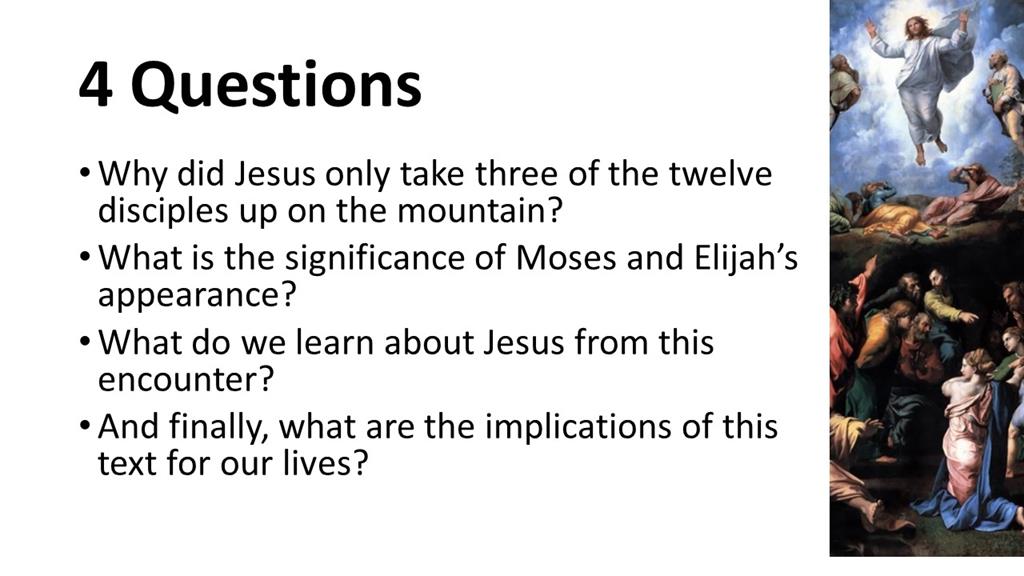 Why did Jesus only take three of the twelve disciples up on the mountain?
What is the significance of Moses and Elijah’s appearance?
What do we learn about Jesus from this encounter?
And finally, what’s the implication of this text for our lives?

That’s more than we can chew on in one sermon, but let’s see where it takes us. 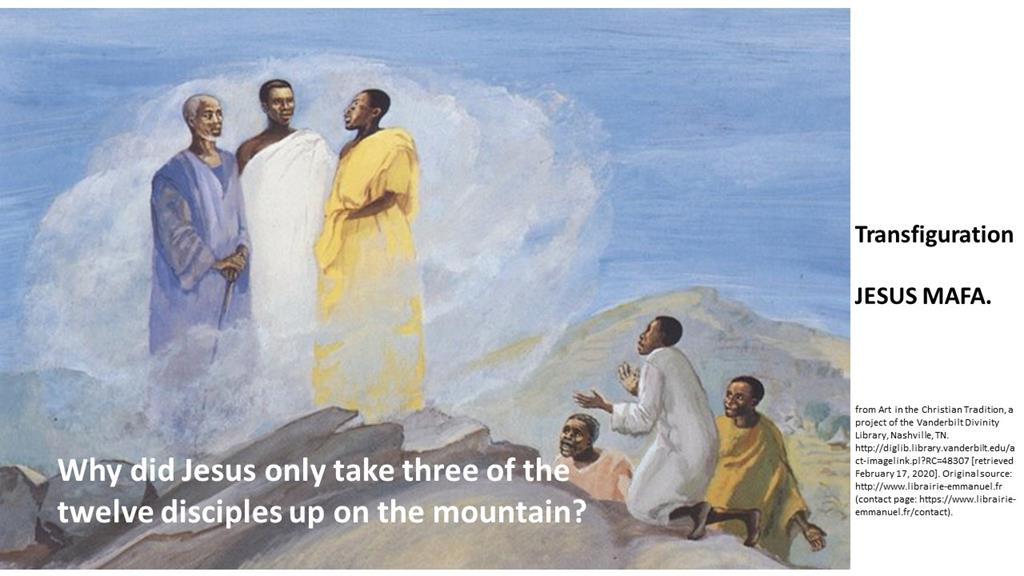 We’re told that Jesus took Peter, James and John up on the mountain. In Scripture, many things happen on mountaintops, going back to Abraham. So the reader is expecting something to happen up on the mountain, at a place that symbolically links the earth to heaven.[4] But why does Jesus only take three of the twelve disciples? Did the other nine feel left out? We’re not told, but we must admit that there are times it’s easier to have an experience with a few than with many. These three, in a way, form Jesus’ inner-core. Each of these become the major players in the early church.[5] So maybe Jesus had a tactical reason for allowing them to have this experience. Furthermore, mountaintop experiences in Scripture tend to happen only to individuals or small groups and it’s up to those having the experience to share what happened with others.[6]

What’s important here is not that those of us who follow Jesus have a mystical encounter, but that we learn from the experiences of others. Not all of us will have a Damascus moment like Paul, or witness a burning, non-burning bush like Moses, or the Transfiguration like the three disciples. After the resurrection, Jesus responded to Thomas (who wasn’t at the Transfiguration): “Have you believed because you have seen me? Blessed are those who have not seen and yet have come to believe.”[7] Most of us will fall in the latter category. We are those who have not seen and have yet, because of the testimony of others, believe. 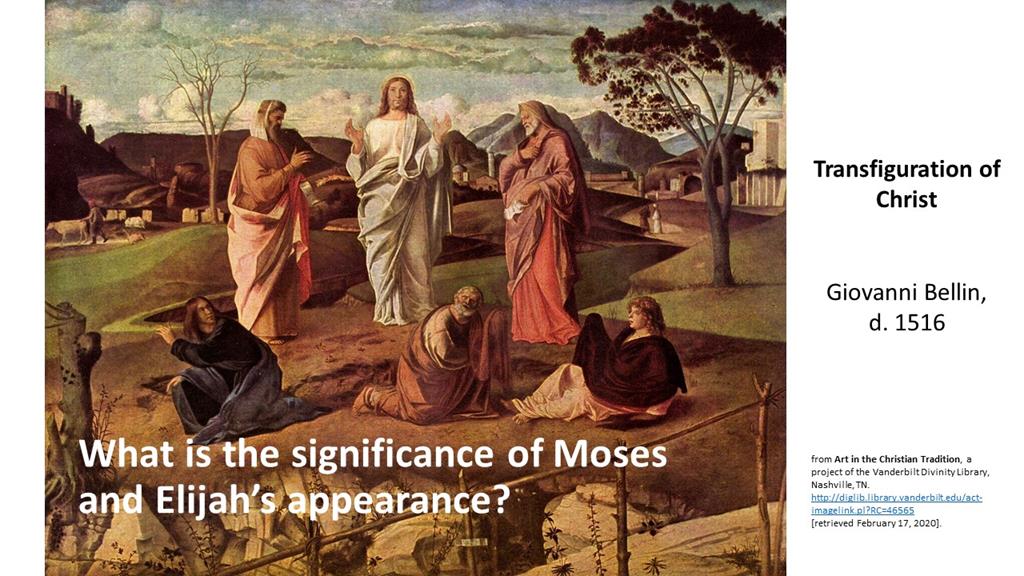 Once Jesus and the disciples make it to the top of the mountain they experience a vision.[8] Jesus begins to glow. His face was like the sun and his clothes became dazzling white. That in itself was amazing, but then there appeared Moses and Elijah, who were alive and talking to Jesus. We’re not told how the disciples knew it was Moses and Elijah. I’m pretty sure they weren’t wearing name tags. But how they knew is not as important as to who they are. These are the two great figures in the Old Testament. Moses brought God’s law down from the mountain to God’s people at Sinai. He represents a fulfillment of the covenant that began with Abraham. Elijah is the representative of the prophets, those individuals called by God to demand the Hebrew people’s faithfulness to their Lord.

The appearance of Moses and Elijah is a reminder of the importance of the Old Testament and how it points to Jesus. The Scriptures of the Old Testament are still valid, but they now take on a different dimension with Christ, the one who came to show us the way home, the way back to God. In their appearance, the past (or what we might call tradition) points to the way forward. This is especially true for those of us on this side of the crucifixion and resurrection.[9] 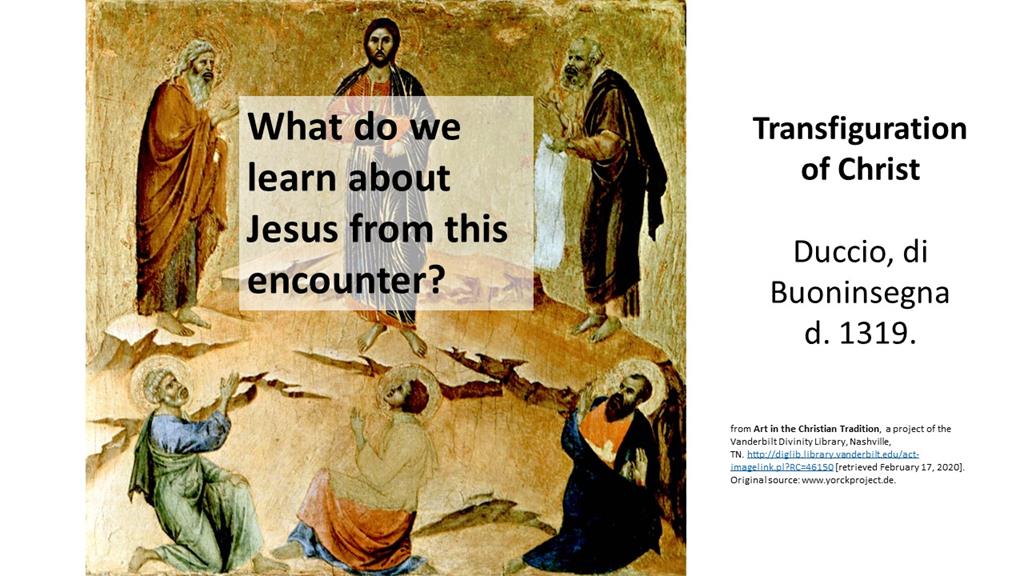 This all amazes the disciples and causes Peter to begin babble about building shelters, perhaps to prolong the event. But while Peter rambles, we’re told a bright cloud suddenly overshadowed them. Think about this, Jesus is already dazzling white, so this cloud must have been really amazing. And from the cloud, as it was at Jesus’ baptism, God speaks. “This is my Son, the Beloved; with him I am well pleased; listen to him.” The words are the same as at Jesus’ baptism except for the last three: “Listen to him.”[10] Again, God confirms Jesus’ identity and role, but now God commands the disciples to listen to him. God is saying that what Jesus says is important. As we learn in the prologue to John’s gospel, Jesus is God’s Word.[11]

Here, in this passage, we have God the Father, and the traditions of the past (Moses and Elijah), all pointing toward Jesus as the way forward. He’s the one whom we’re to follow, which is the core of the message within this passage. 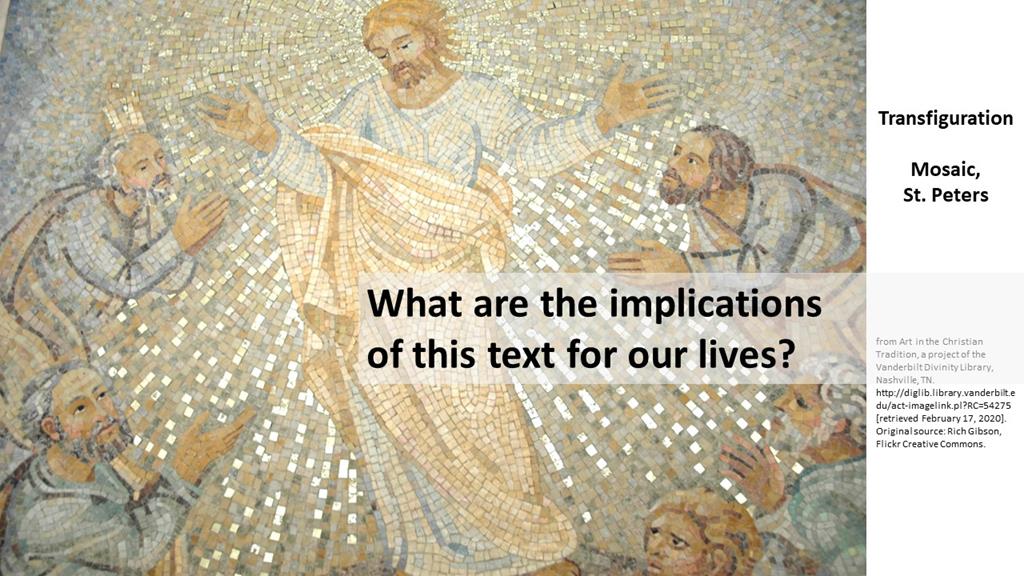 The disciples are overwhelmed and fearful. They fall to the ground. But it doesn’t last long. Jesus comes over and shakes them as they crouch on the dirt and says, “Get up and do not be afraid.” And as they look up, it’s all over and it’s time for them to leave the mountain and join the rest of the disciples at the base of the hill. 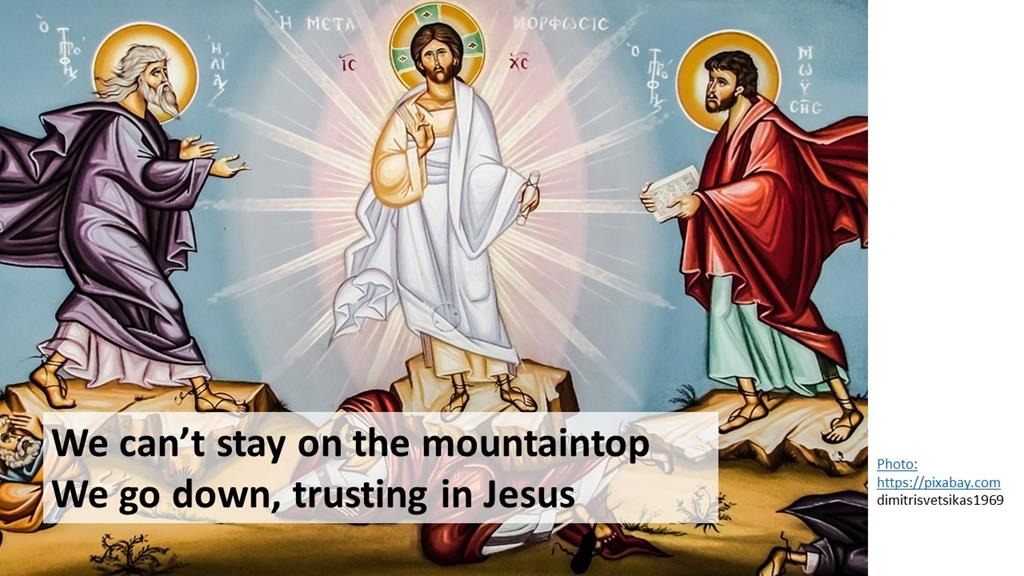 Two things we should take from Jesus’ words. We can’t stay on the mountain. As followers of Christ, we are called to live out our discipleship in the valleys, with the people, not up on the mountaintops away from problems. Yes, sometimes we need a break, we need time alone.[12] But ministry (and we’re all called into ministry) is among people, down the mountain, where things can be dirty and messy. And as scary as the mountaintops might be, going back down can even be scarier. But we’re not to be scared because Jesus is with us. Our lives are to focus on him, first and foremost. And if we focus on Jesus and trust that he has things under control, we shouldn’t be afraid of anything. Yes, in life some bad stuff can happen, just like it happened to the disciples, BUT Jesus has it all worked out. He’s secured our future so that we might live for him in this life. 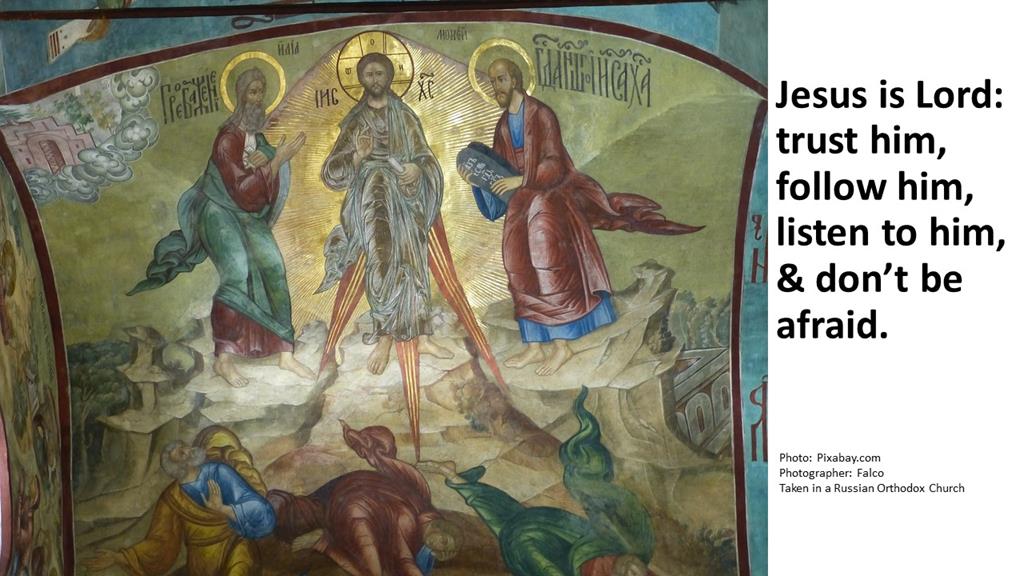 So what does the Transfiguration say to us today? Jesus is Lord, listen to him, obey him, trust him, follow him, and don’t be afraid. “Get up, don’t be afraid.” Good words for us to consider as we, as a congregation, prepare for our future. Amen.

[6] Think of Abraham and Isaac on the mountain (Genesis 22), Moses on the mountain (Exodus 3 and 19:20ff), Elijah on the mountain (I Kings 19:11ff), and Jesus in the wilderness during his temptation (Matthew 4:1-11).  See also Bruner, 165. Bruner refers to J. A. Bengel’s 18th Century commentary. Bengel suggested the mountain may not have been named to avoid superstition. In light of this, I suggest it’s not the mountain that’s important, but the Jesus who is revealed on the mountain, therefore it’s more about what we do with this experience than the experience itself.

[8] While the story (verses 1-8) doesn’t say this is a vision, when they head down the mountain, Jesus describes it as a vision in verse 9.