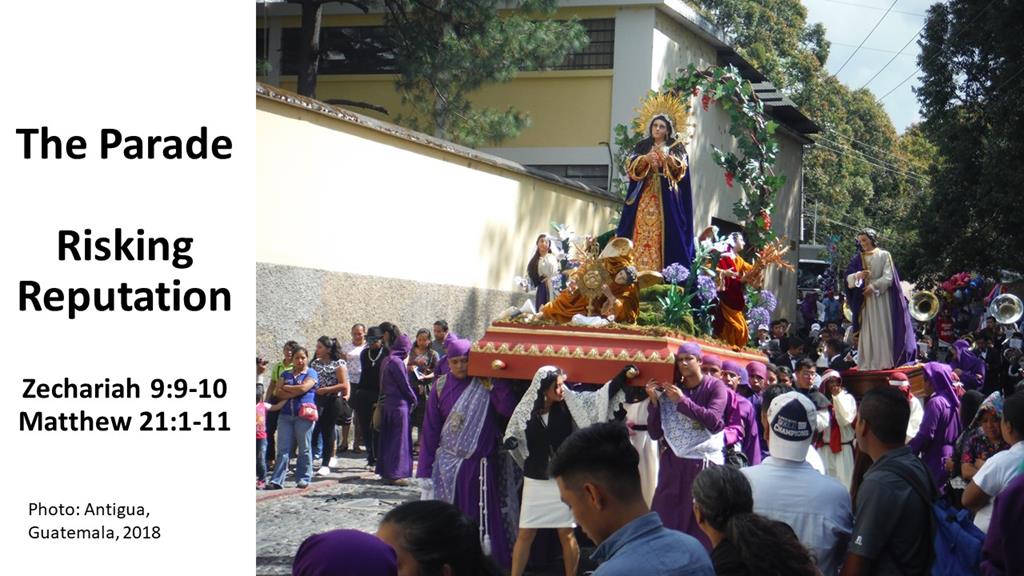 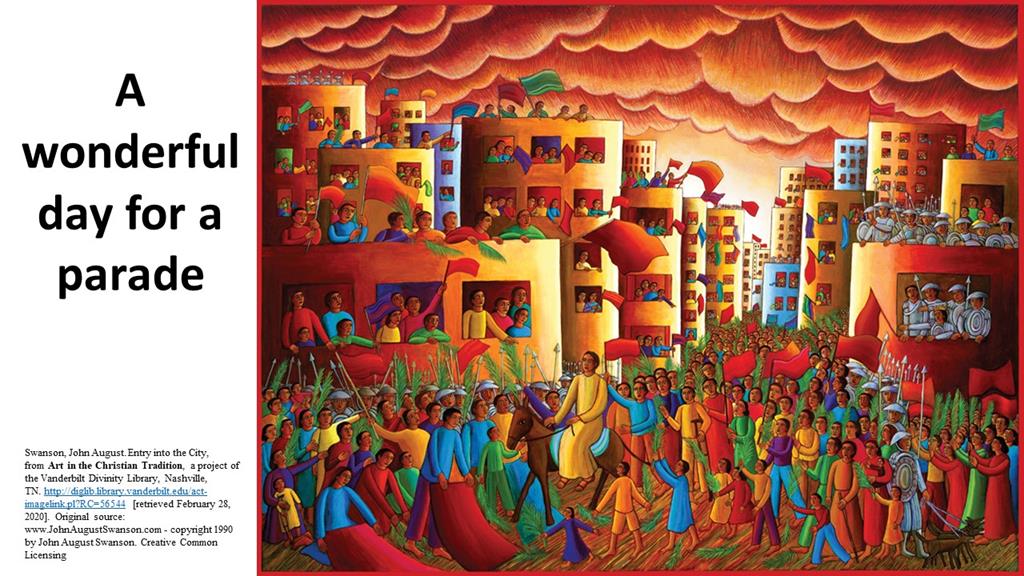 Everyone loves a parade. Or so they say. I’m not sure it’s true. If you’re like me and prefer to take the back roads for scenery, and then find yourself stuck behind a small-town parade, you know what I mean. Yet, there is something intoxicating about crowds. It’s addictive to be a part of something larger than ourselves. Hopefully, that something is God, but we must acknowledge that we’re also lured by the masses (except for during flu season or when a virus is on the loose).

It’s an exciting spring day in the imperial city of Jerusalem. Pilgrims pour in; Jews living throughout the Mediterranean gather at their ancestral city to celebrate the Passover. What a wonderful day for a parade…

Jesus and his gang are also coming to Jerusalem to celebrate. When only a few miles from town, Jesus sends his disciples into the next village in order to procure a donkey and colt for his entry… He tells them where to find these animals. He instructs his disciples to respond to anyone who challenges them with, “the Lord needs it and will return it.” The disciples find the animal; some bystanders question their taking the colt, but they seem satisfied with the answer. Did Jesus work this out in advance or is this a sign of his divinity? The text lets allows us to ponder, providing no clear indication as if this Jesus’ humanity at work (he arranged for the colt in advance) or his divinity at work (he knew where to send the disciples).[1] 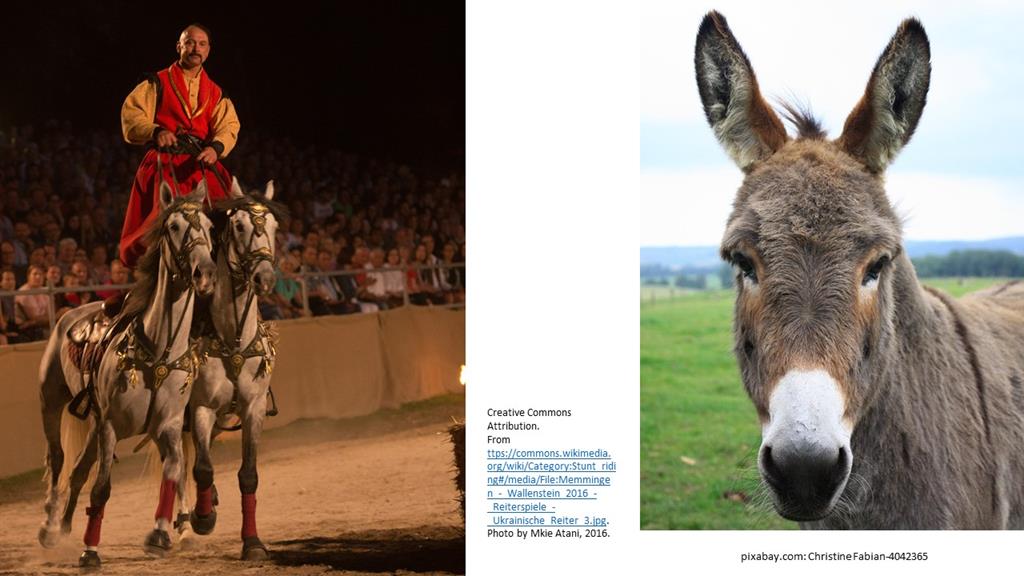 The disciples, without being asked, placed their cloaks on the animals as a saddle. Now, how Jesus rode two animals, as Matthew seems to suggest, we’re not told. We might image him, holding the reigns in his teeth, with a foot on each animal, like a circus rider taking a victory lap, but that’s probably not the case. Instead, he may have sat on the donkey, sidesaddle, as was the custom for riding such beasts, and had the colt follow along, staying close to its mother.[2] 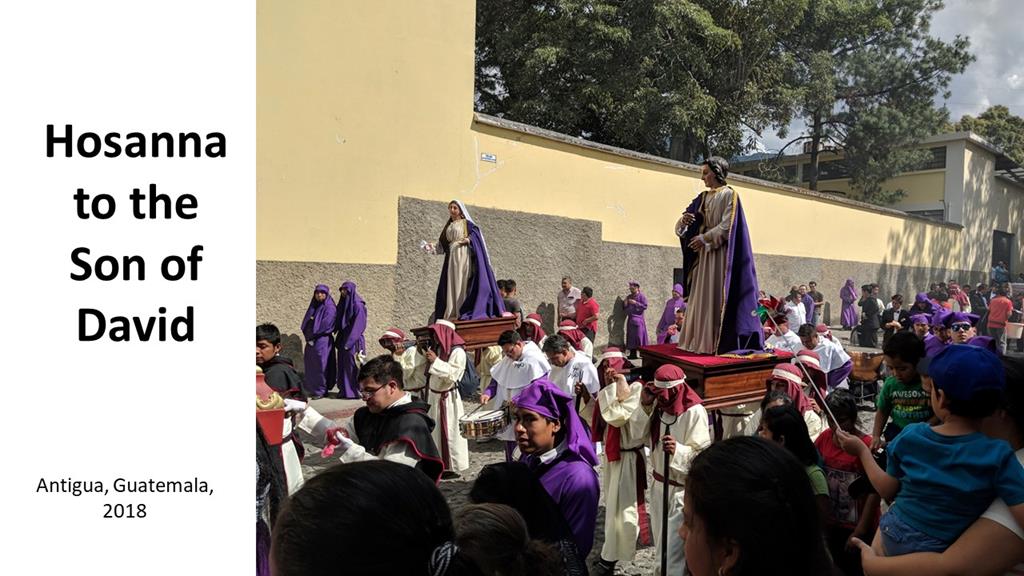 Quickly, as he and the disciples approach the city’s walls, excitement builds. Followers start placing their cloaks on the ground—in Sir Walter Raleigh’s fashion—as the procession begins. Someone brings in branches—we’re not told if they’re palms (the palms only appear in John’s gospel).[3] These branches are waved, making the parade more festive. The waving branches welcome Jesus as if he’s a general or a king returning victorious… And they begin to chant Hosanna, which means “Save us,” as they quote from Psalm 118:

Hosanna to the Son of David!
Blessed is the one who comes in the name of the Lord.
Hosanna in the highest heaven![4] 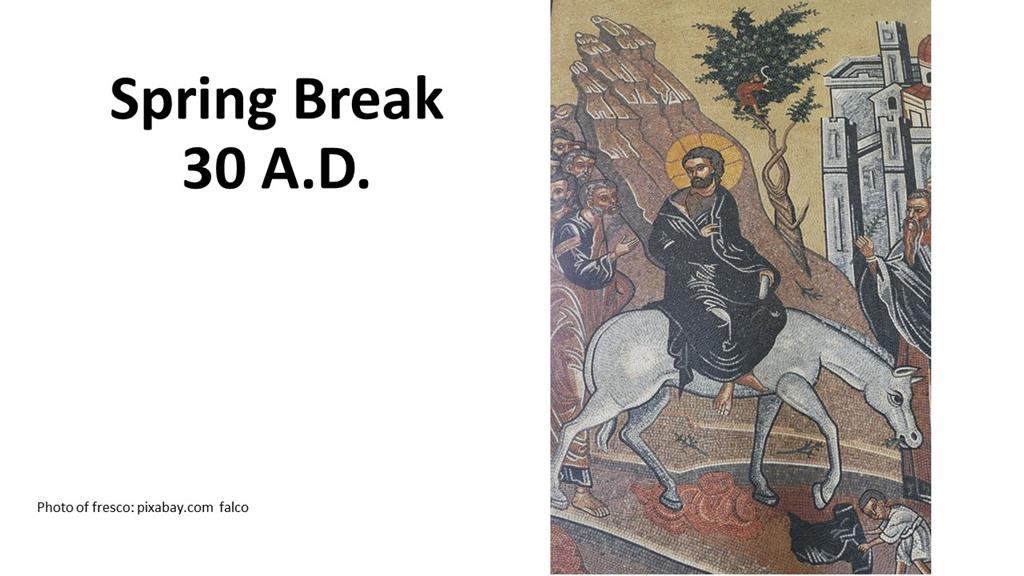 I image its mostly pilgrims making up the crowd. Many of them would have been from the small towns and villages in Galilee, who’ve come to Jerusalem to celebrate the Passover. This is Spring Break, 30 AD. Just like today, most everyone makes a trek south—but instead of Florida, they head to Jerusalem. For many of the pilgrims, this is the highlight of their life—being in Jerusalem for the holiday. It’s like us getting a chance to celebrate New Year’s Eve on Times’ Square, Mardi Gras in New Orleans, or Christmas at Grandma Moses’ farm. This is a once in a lifetime chance. And as they come to Jerusalem, they recall God’s great acts of salvation in the past, of how God freed the Hebrew people from Egyptian slavery and saved them from Pharaoh’s army. Reminiscing about God’s past activity opens them up to the possibility God will act again and restore Israel to her former glory. They’ve gathered in hope.

Many of them are hoping Jesus is the one they’ve been waiting for, for so long. They see him as the man God will use to shake off the Roman shackles and allow Israel to once again be free. Jesus, however, doesn’t fulfill their expectations. 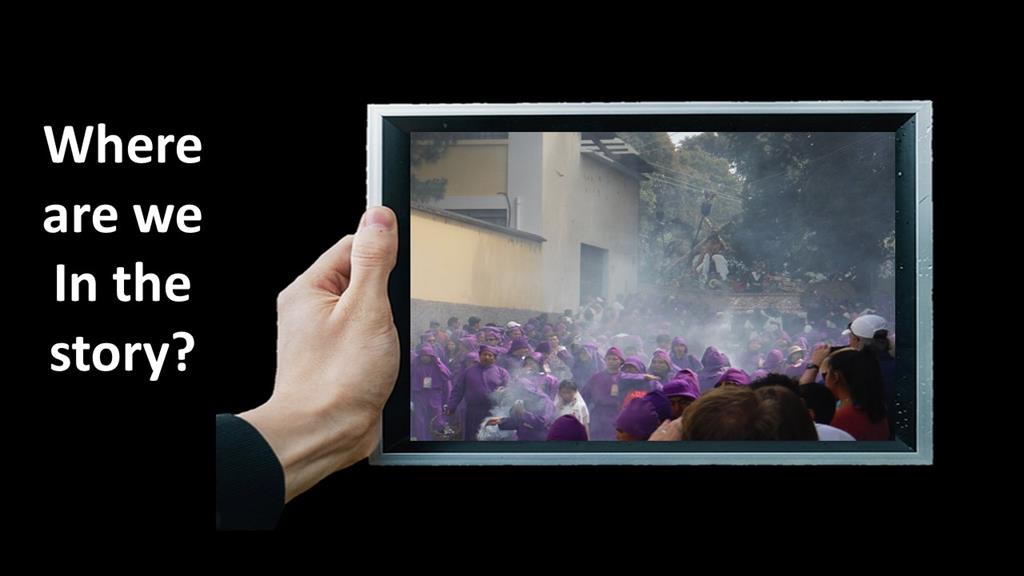 We’re left to wonder what our response would have been if we were there? Where would we be in this story? Would we have been in the crowds shouting “Hosanna?” And if so, would we’ve also been in the crowds shouting “Crucify?” For you see, it’s hard to separate the parade at the beginning of Holy Week, with the crucifixion that comes five days later.

What is it about our nature which allows us to get excited when our religion seems to support our expectations? And then, back away when things seem to move in a direction with which we disagree? We often forget that God’s ways are not ours. 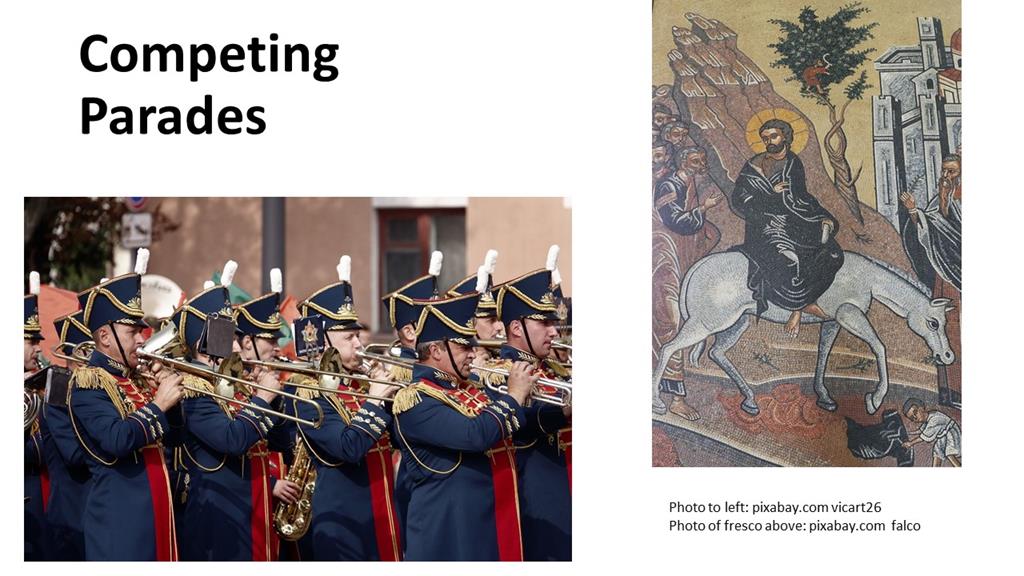 Jesus takes a risk with this parade. In this series we’re going to see repeatedly the risks Jesus and the disciples took during Holy Week. Here, with the parade, Jesus mocks politicians who entered Jerusalem with pomp and circumstance. As Jesus comes into Jerusalem, there were two other significant political figures either already in the city (or if not, they were soon to be there): Pilate, the Roman governor, and Herod, the Roman puppet king. There was probably a parade for them too, one involving fancy horses and soldiers with shiny brass and perhaps even a band. Pilate and Herod display the power of Empire; Jesus, humbly riding on a donkey, displays the power of a mysterious kingdom, one not of this world. Who do we follow? Are we lured by the fancy horses and war chariots of the kings and politicians? Or do we follow the man on a donkey.

This is political, and church always has difficulty with politics. We walk a line between being prophetic in calling government to a higher standard (which is appropriate) and playing the court jester. With the later, we sometimes divert people’s attention from what’s important and thereby providing support for the status quo. In a way, with the decline of the mainline churches, we no longer play the role we once did in politics and that’s probably good. 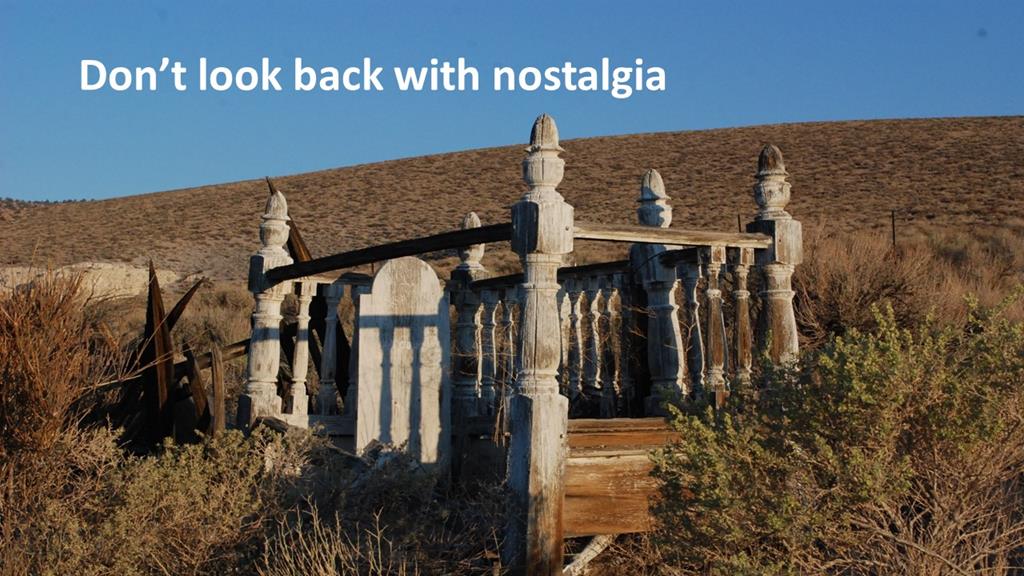 A few years ago, I heard Miroslav Volf, a theologian and the founder of the Yale Center for Faith and Culture, address this issue. “Don’t look with nostalgia on when the church was in the center of everything,” he said, “for then it was used and abused by those in power… instead, we must find the language and the confidence to cheerfully live our lives as followers of Jesus Christ.” The church can’t and shouldn’t depend on political power.[5] Jesus, riding on a humble donkey, demonstrates this. We depend on God’s power to carry out God’s purposes.

Many people think that the reason the mainline churches have declined in influence is that we no longer reflect the values of the larger society. This may be so, but even if it is, we must remember that we’re not called to reflect the values of society. We’re called to reflect the values of that man who rode into Jerusalem on a colt some 2000 years ago. And his values constantly challenge us as to who we are and to whom we belong. Do we conform to how others want us to be, or do we strive to conform ourselves to the example of our Savior Jesus Christ? Are we intoxicated by the crowds, or by a desire to stand by the one who is the way and the truth and the life?[6] 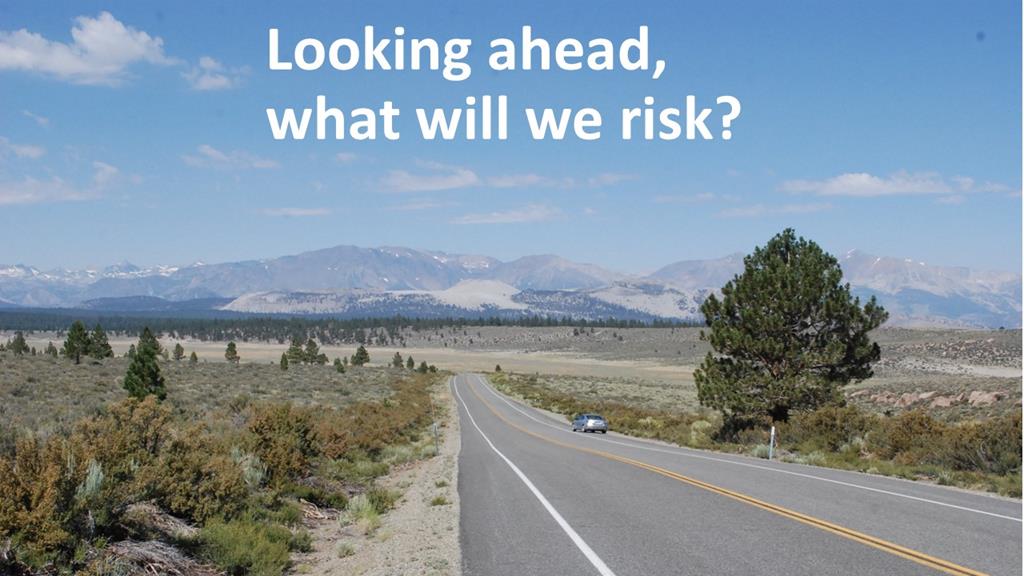 As we move through this season of Lent, we need to ponder what Jesus’ risked during Holy Week, and what we are willing to risk for the sake of the gospel.[7] Here are some things we should consider. Do we only support our church when things go our way, or when we hear what we want to hear, or when the church does only the things we want to do? If that’s the case, are we taking risk? Are we being supportive? Are we being Christ-like? Are we being open to where God is calling? Or, to ask the question another way, if we only listening to what we want to hear from Jesus, are we really being faithful to him? It takes faith to stand alone when the crowds disappear; it takes faith to buck the trend. Granted, sometimes we, as individuals and as the church, are wrong, and when we are it takes faith to admit that we are wrong and to seek the new trail Jesus is blazing for us…

We hear the crowds… We are drawn toward Jesus… Will we just hang around for the fun of the parade, or will we take a risk and continue to follow him as his journey moves toward the cross upon which we’ll be called to sacrifice our wills and desires for his? Amen

About the background slides:  The photos and artwork with attributions are either  from pixabay.com or the collection at Vanderbilt Theological Seminary. The rest of the photos are mine. The ones of a parade (procession) were taken on the first Sunday in Lent in Antigua, Guatemala in 2018.  The graveyard shot was taken above the town of Benton Hot Springs on the California/Nevada border and the photo of the highway was taken between Benton Hot Springs and Mono Lake, as I was driving toward the Sierras. These photos were taken in 2013.

[7] Risk is the theme for this series. See the “Sermon Fodder”  in www.theworshipdesignstudio.com/passion