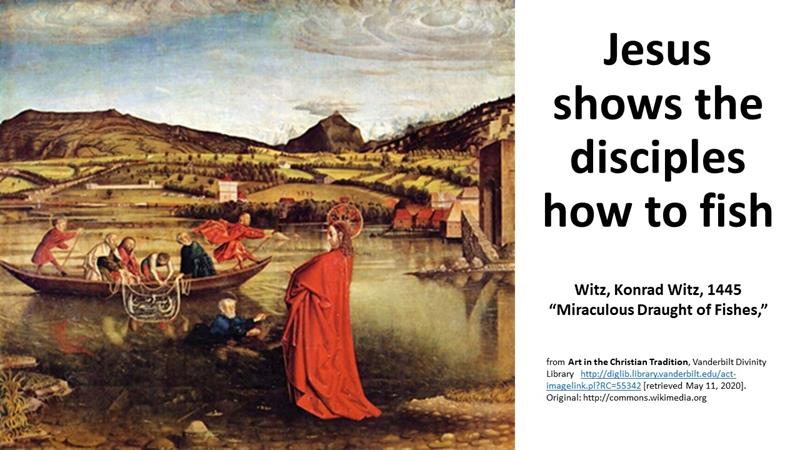 This worship service can be found at on YouTube at https://www.youtube.com/watch?v=KSbn75Dr6d8. To listen just to the sermon, go to 12 minutes into the service. The sermon ends at 36:40.

Today and next Sunday, we are going to explore Jesus’ last post-resurrection account in John’s gospel.[1] Two weeks ago, when I preached last, we discussed Jesus eating left-over fish for dinner.[2] Today, the disciples eat fish and bread for breakfast on the lakeshore.

As we’ve done throughout this series, we have a classical painting, this one from the 15th Century, to help us get into the story. This artist, I doubt, ever saw the Holy Lands. He images Jesus and the disciples on a European stream. But he gets some things right. There are seven disciples in the picture, Jesus is showing them how to fish, and Peter is so excited he’s swimming to shore to be with Jesus. But more importantly, he shows Jesus coming to the disciples! Place yourself into the painting, just downstream. Think about all this. You have this landlubber giving instructions to the men in the boat who haven’t caught a fish all night. Suddenly, there’s more fish than they know what to do with? Is it a miracle or a lucky guess? What do we make of this story? What can we learn?  Listen as I read from John 21, reading from The Message translation. 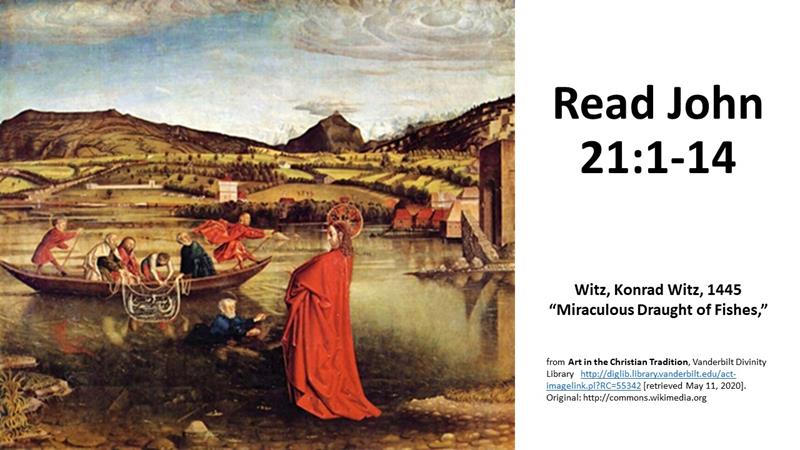 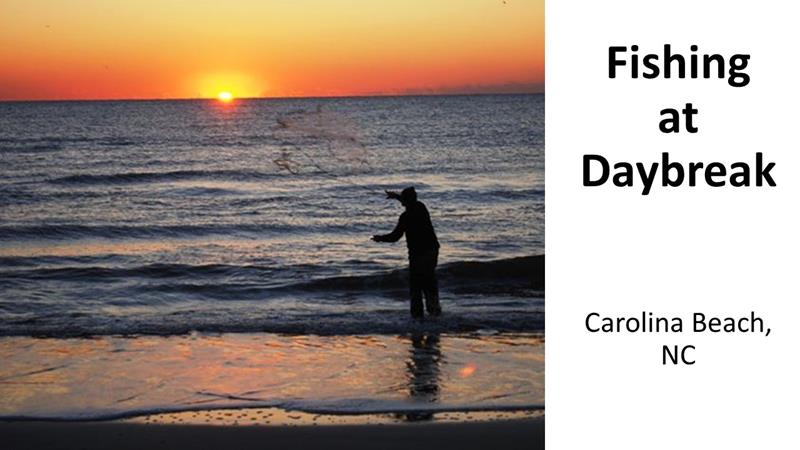 The best fish are fresh from the water. Even greasy bluefish make a great breakfast when grilled over a charcoal fire on the beach. I was probably 10 or 11 when I first had such a treat. We were fishing on Masonboro Island. It was in the fall, when the bluefish run. We got up when it was still pitch dark and chilly. My dad started a charcoal fire, which helped us stay warm. But instead of sitting around the fire, we soon had lines in the dark water, casting out into surf. In darkness, we fished with bait. On the end of the line, we had a rig with a weight and two hooks, each containing a strip of mullet. When the fish hit, we’d yank the rod to set the hook, then reel hard. Soon, if lucky, a flapping fish could be made out from the distant light of the lantern. We’d have to bring the fish into the light in order to safely get out the hook. 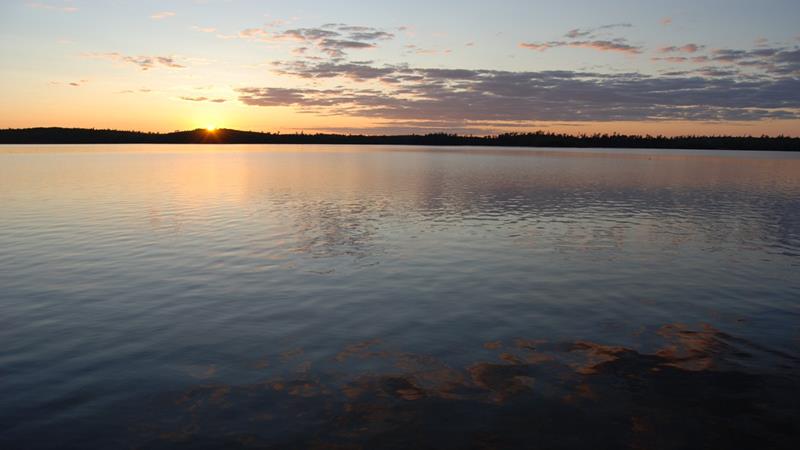 Leaving our fish on sand, we rebait our hooks and again cast out into the surf. Slowly, the sky changes. The stars began to extinguish themselves. A ribbon of light appears on the horizon, and it gradually growed. We began to be able to make out the beach and could see where the waves were breaking. Soon afterwards, the sun would slowly rise, its rays seemingly racing across the water toward me, as if they whose rays were destined just for me. 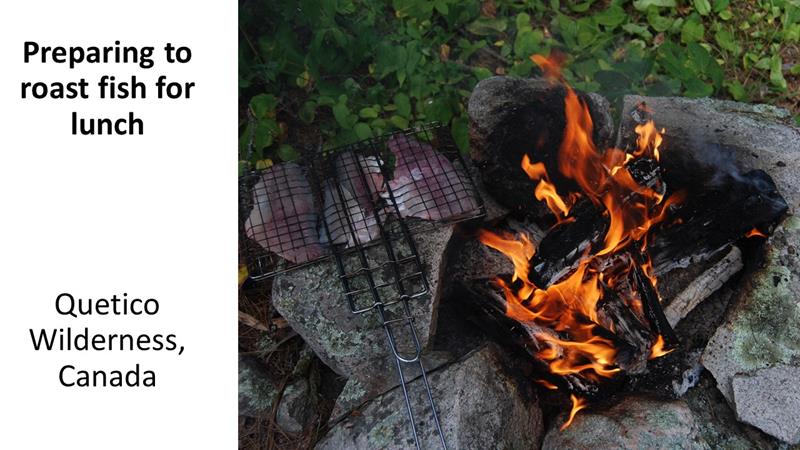 When there was a lull in the action, we’d stop and clean a few fish, washing them off in the surf, and then lay them on a grill over the coals. In a few minutes, we’d be “eatin’ good.” Afterwards, we’d change the rigging on our rods to plugs and spoons and head back to the water’s edge. Good memories of good times. 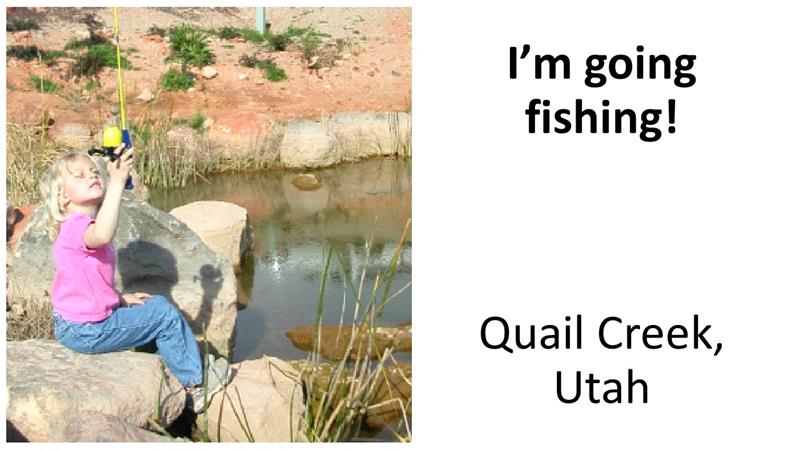 Perhaps it was because I grew up in a home where fishing ranked just below church attendance in priority that Peter’s statement, “I’m going fishing” seems normal. And to the six disciples with him, it sounds like a plan. They head to the water and fished the night. They had terrible luck. That happens. Some mornings there are no bluefish for breakfast.

These men, before becoming disciples, had been fishermen. But this isn’t a story about fishing, even though surprisingly we’re told exactly how many fish they caught. Instead, it’s a post-resurrection story, about Jesus coming to the disciples. 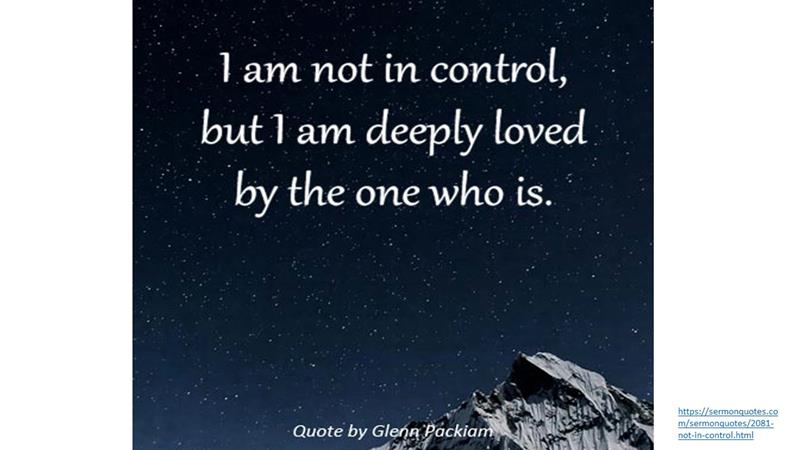 As I’ve emphasized in these sermons on Jesus’ resurrection, the disciples learn a true lesson. They are not in control. Jesus is in control. We often have this image of going to Jesus, but in truth, Jesus first comes to us. In today’s story, Jesus knows where many of his disciples are. They’re by the lakeshore, fishing, because that’s what they know how to do. So, like when he first called them, he returns to call them again. Next week, we’ll look at how Jesus sends out Peter with a mission, but before we go there, I want us to spend some time in this story.

Imagine, having spent the night fishing with nothing in the bucket. Then along comes someone on shore, 100 yards or so away, far enough away you don’t recognize him. This someone greets you and asks that question that fishermen despise on a bad day. “Have you caught anything?” A loaded question. If you out on a pier and ask that question to a fisherman, his response will probably depend on how well the fish are biting. If there’s only one pinfish in the bucket, you’ll get a grumbled answer that essentially tells you to keep moving. But if the fishing has been good, the fisherman may open the cooler and let you look with awe on his catch. 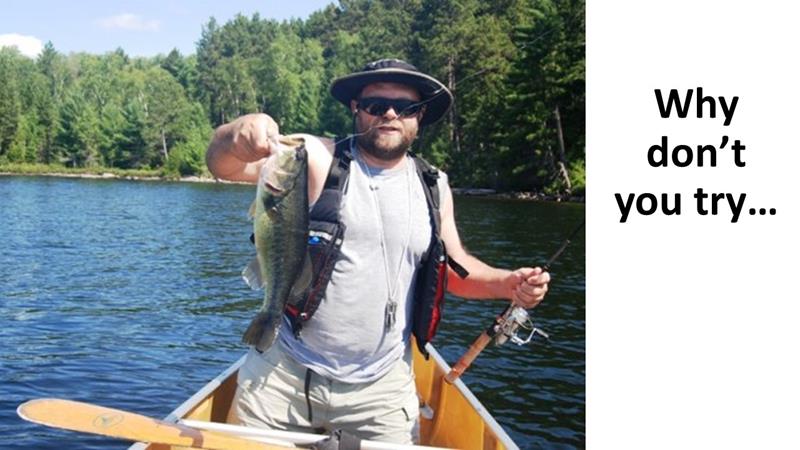 On this night, the fishing hadn’t been good. Jesus then does something else that goes against fishermen etiquette. “Why don’t you fish from the other side?” That’s like suggesting a different lure or fly. “Take off that spinner and put on a jitterbug; or get rid of that wooly bugger and put on a popping bug.” But Jesus’ advice pays off as they catch so many fish the net is about to break. Only then does the Beloved Disciple realizes it’s Jesus. Before he can act, Peter throws on some clothes, jumps in and swims toward shore.

Peter, whose nickname was “the Rock,” obviously had learned to swim since that earlier occasion when he tried to walk on water and sank—like a rock.[3] The disciples struggle to pull in the net and when they get to the beach they realize Jesus has already prepared breakfast. But Jesus doesn’t just let those good fish go to waste. He encourages the disciples to bring some of them over and add them to the fire. Jesus uses what we offer to make the banquet table even larger—there’s a message here. 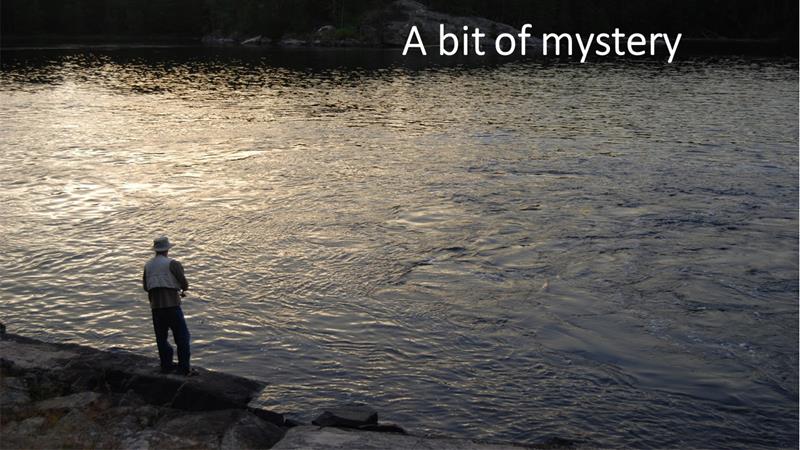 Like the other post-resurrection appearances, there’s also bit of mystery. Why do we even have verse twelve? After Jesus calls them in for breakfast, we’re told that no one dared to ask, “Who are you?” They knew it was Jesus, but the text leaves us wondering what’s going on. Furthermore, they don’t recognize Jesus right off. It’s only when they follow his suggestion that they encounter him. There’s probably a lesson in that, too. When we listen to Jesus and do what he says, our relationship grows. 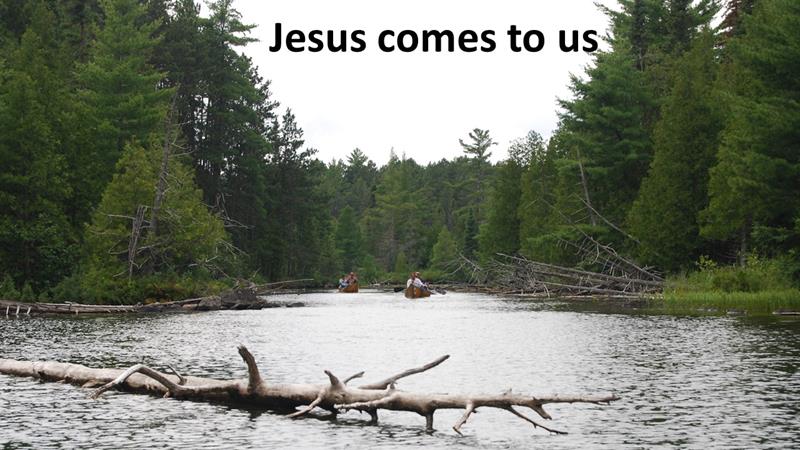 There are three things that happen to the disciples in this passage that we should take to heart. First, Jesus comes to us. Jesus shows up at the most unexpected places. In these stories, he doesn’t show up at church or the synagogue or the temple. Instead, it’s at work, after or before visiting hours. Think about the post-resurrection appearances. Except for meeting the disciples on the road to Emmaus, Jesus always shows up on the shoulders of the day (at daybreak and in the evening). In this case, Jesus arrives as the disciples are finishing up their night shift at a job that wasn’t going to be paying much this day. As followers of Jesus, we must be ready for whenever our Savior decides to pop by. Jesus is not just Lord over Sunday or over religion, he is Lord of all, and can meet us wherever we find ourselves. This is good news in a time that many of us find ourselves prisoners in our own homes! Yes, Jesus can show up even there, you’ll just have to let him in.

A second thing we learn is that Jesus doesn’t just give us all we need. Yes, Jesus had the fire going with fish and bread being prepared, but notice he doesn’t say to the disciples: “We don’t need those 153 fish, throw ‘em back.” That would have belittled their efforts. Jesus doesn’t even take credit for helping with the catch. Instead, Jesus invites the disciples to bring some of what they caught and to place them over the coals. Jesus uses what we have and expands it. 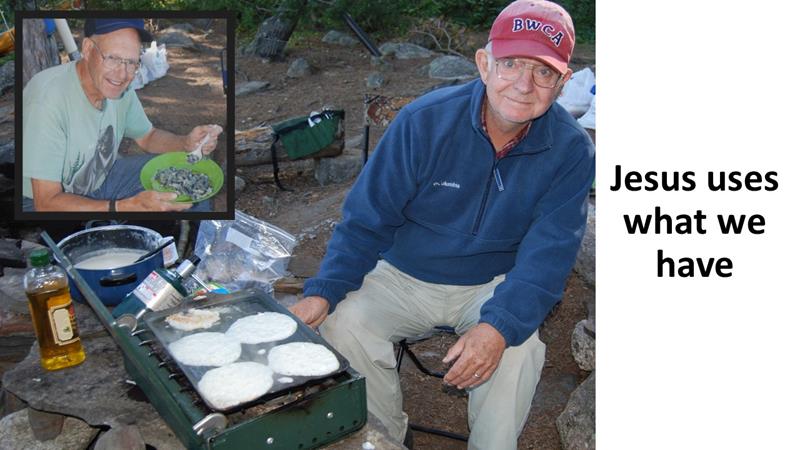 Let me tell you a story to illustrate this. Many of the photos I’ve using today came from a 2008 trip into the Quetico Wilderness in Western Ontario. The guy at the camp stove you see now is Doc Spindler. One morning, he was talking about having pancakes and so proud of himself for prepacking everything he needed. To be helpful, Jim Bruce (who visited us here at SIPC in February and seen in the picture with the full plate) and I went out early that morning, braving the bears as we picked a quart of so of blueberries. We brought them back and Doc was so happy to have blueberries to mix into pancakes. You use what you’re given. Doc knows this. Although a great guy, however, Doc isn’t Jesus. Instead of the baggie with pancake mix, he used a package of meal for frying fish and the blueberry pancakes ended up coming out like goulash. But with a little syrup and butter and an empty stomach, it was still good.

Jesus takes our gifts, our talents, and employs them in manners beyond what we ever imagined. We just need to be willing to share our blessings. What have we’ve been blessed with that we could offer Jesus for his use in the building of his kingdom? 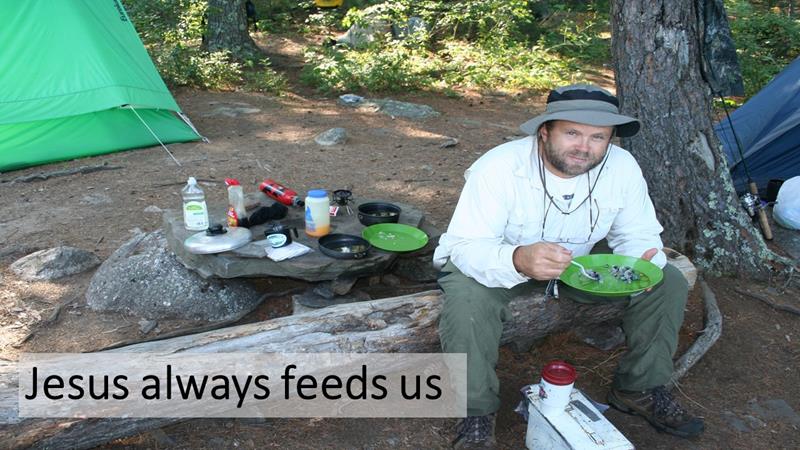 Finally, Jesus feeds us. In this case, he fed the disciples a hearty breakfast of fish and bread. But Jesus, who calls all who are weary to accept his yoke, will restore our tired souls and feed our minds and bodies with his presence and comfort.[4] We know, that with him, we have nothing to worry about, for his love is greater than death. When we’re burdened, and let’s face it, we’re all burdened these days as we worry about what’s going to happen, we should call on and depend upon Jesus. He’ll stand by us when no one else will. Amen.