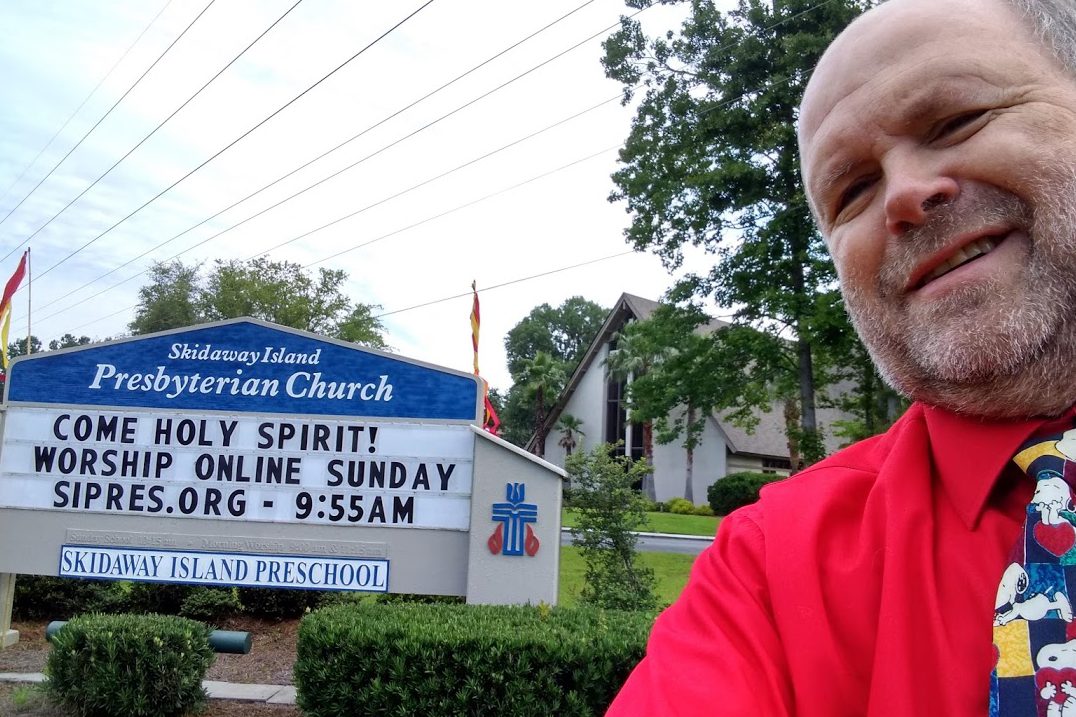 Our worship services are available at our church’s YouTube page. This link will take you to this service. The sermon begins at 16:00 minutes and is over at 36:10. You can fast forward to the sermon. 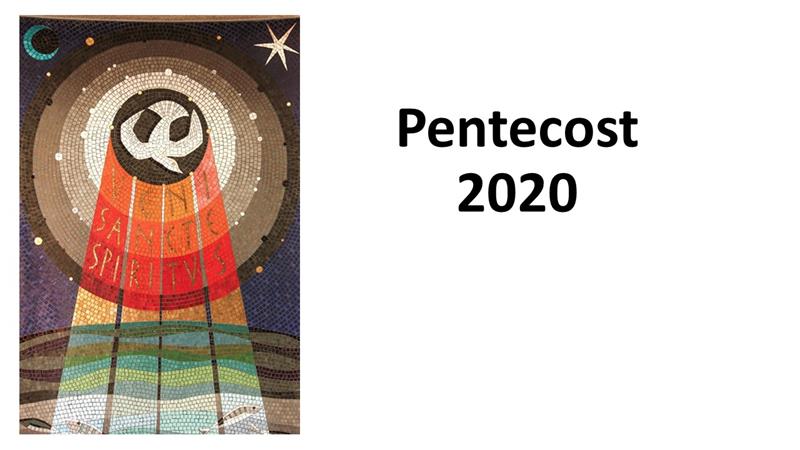 2020 is turning out to be a year we’ll not forget. Everything seems out of control. A virus has killed over 100,000 Americans topped off by an economy in a free-fall. We’ve witnessed the murders of innocent and unarmed black men in Brunswick and in Minneapolis, and the resulting riots threatening to unravel our nation. It’s scary. But the world has often been a scary place. For Christians, the world of the first century was scary. Jesus was essentially lynched and many more would also die a martyr’s death.[1] But out of that death came the church.

Something happened on this day nearly 2000 years ago. God’s Spirit poured down on the few believers and they began a movement. As I read this passage, think about what God did in Jerusalem, and what God might be doing in the world today.  Read Acts 2:1-14. 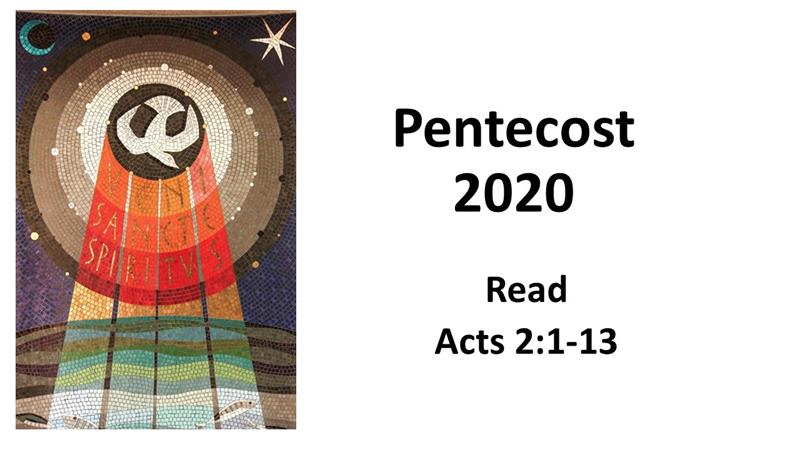 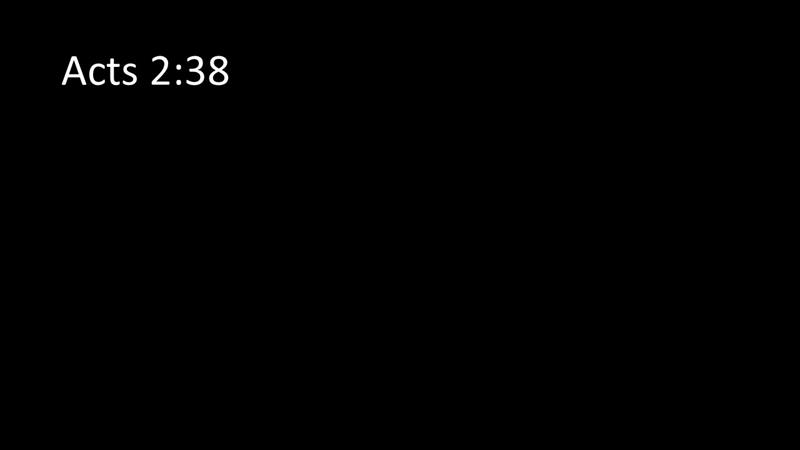 There was an elderly woman who came home from a Bible study one evening and discovered a burglar in her home. In the darken house, she yelled at the intruder, “Stop, Acts 2:38.” The thief turned and she yelled again, “Stop, Acts 2:38.” He froze. He raised his hands as she calmly called the police. After the officer had handcuffed the man, he asked why he’d surrendered to a woman shouting out a Bible verse. “A Bible verse? I thought she had an axe and two 38s”. 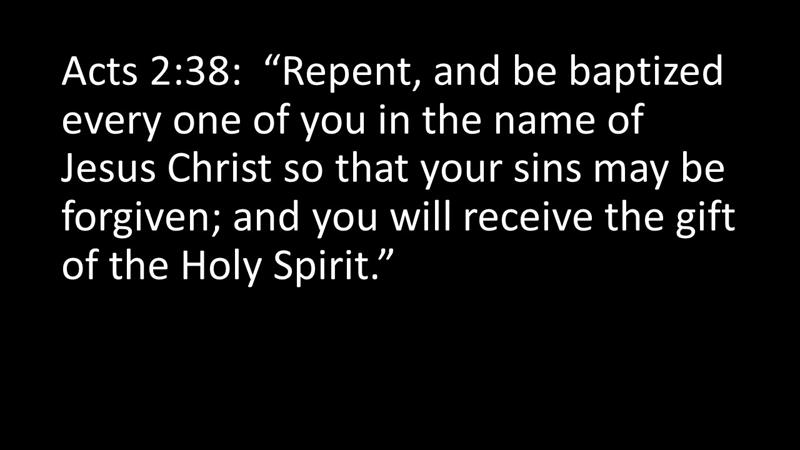 Peter, after his great sermon, that follows the account we’ve just read, called on those within his hearing to “Repent, be baptized, every one of you in the name of Jesus Christ so that your sins may be forgiven and you will receive the power of the Holy Spirit.” Acts 2:38. 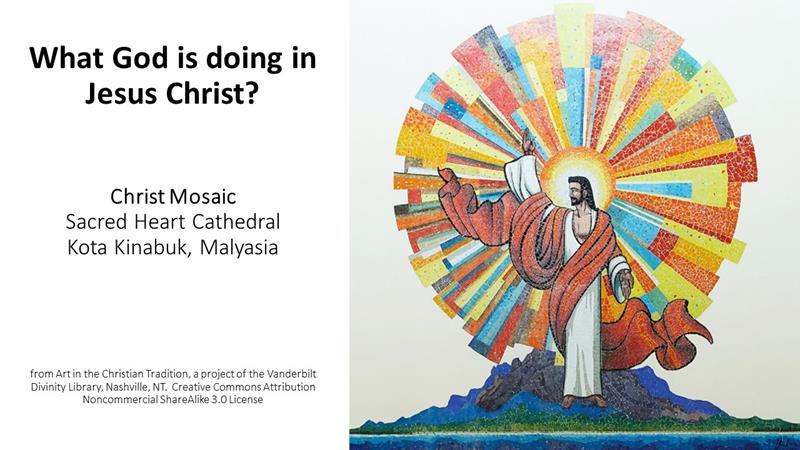 oo often, we think we need force to back up our words, or as in the joke, the possibility of force. But Scripture constantly reminds us our hope is not in what we do or what we have, but in what God has done and is doing in Jesus Christ. We see this with Pentecost, when those flames of the Spirit poured out on a motley group. God takes the initiative. Without God, our efforts are in vain.

As dawn broke on this day in which the church came into being, there were only 120 or so believers. From this small beginning, the Christian faith now claims approximately 1/3 of the world’s population. These “tongues of flames” fell upon the timid group of believers. Filled with God’s Spirit, they set the world on fire. When the morning began, they were like a car with no gas. They had a purpose, but no energy. So, they waited, knowing Jesus promised his Spirit. 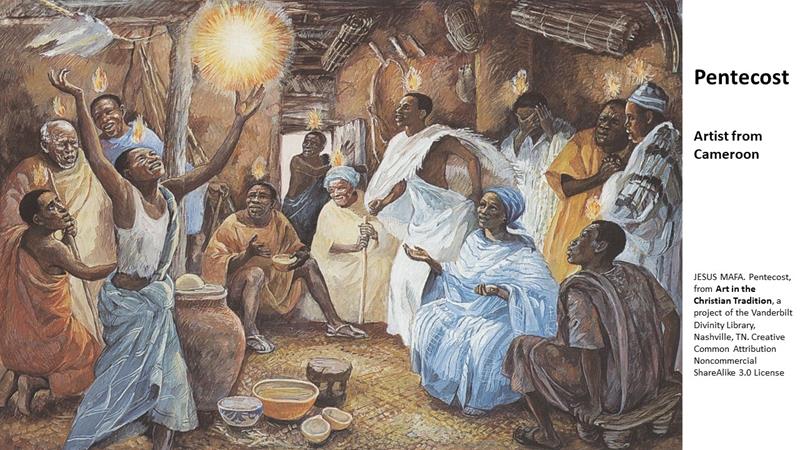 These men and women are not the type of people you’d think could change the world. They’re marginalized. And, to be honest, they don’t change the world. That’s part of the point of the story. God’s the primary actor. Without God’s intervention, nothing would have happened. And the same is true in our lives. God can use us; we don’t have to be sophisticated or multi-talented. The disciples were not great leaders or thinkers, government officials or military heroes. What God needs are people who are faithful. These believers displayed their faithfulness. Many of them were faithful even unto death. With God, all things are possible.

The second aspect of Pentecost for us to consider is the linkage between the Old and New Covenant. Those who’d gathered on this morning, on the day of Pentecost, gathered to celebrate a Jewish holiday. The name Pentecost is derived from the festival held on the fiftieth day following Passover. The festival was also known as the Feast of the Weeks, the Feast of the Harvest, or the Day of the First Fruits. Originally it was when the grain harvest was formally dedicated, but over time the festival came to represent the giving of the law on Sinai, which, according to tradition, occurred fifty days after the Exodus from Egypt. 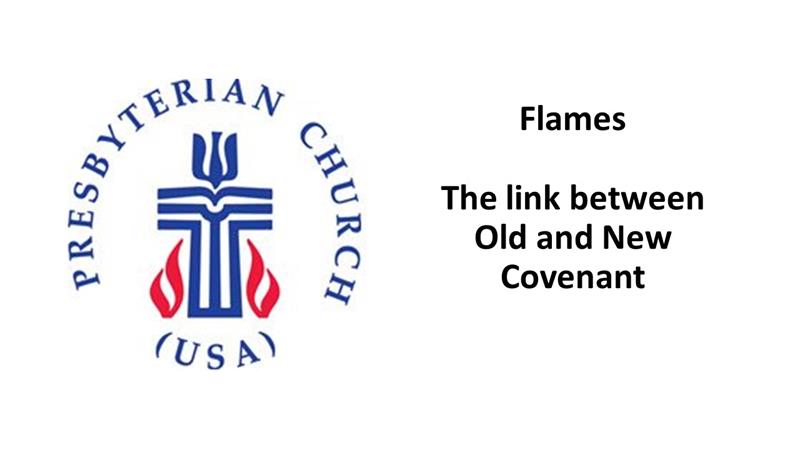 The two flames on our Presbyterian cross represent the two covenants—the Old and the New. The same is true for the two candles on our communion table. The flame of the Old Testament is the giving of the law on Sinai. The other flame represents the coming of the Holy Spirit on Pentecost when the Old Testament prophecy was fulfilled. God wrote the law onto the hearts of believers.[2]

To have the fullness of God’s word, to know God to the best of our limited human abilities, we must draw upon all of Scripture. The two covenants remind us of the mysterious nature of our God. What we know about God has been revealed to us by the Almighty, first in the Hebrew Scriptures and then, the final revelation, in the life of Jesus Christ. Again, God is the actor; God is the one engaging the world. 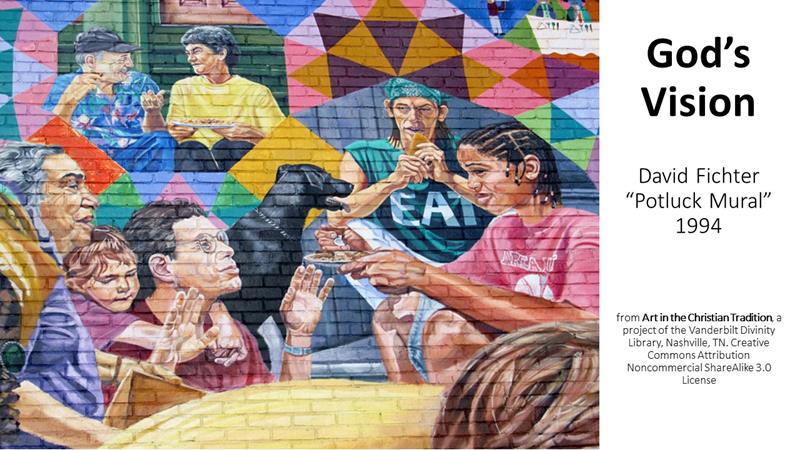 The final aspect of Pentecost for us to consider is how this event serves as a model for God’s intention for the world. Consider the group who’d gathered on this morning. They were all Palestinian Jews. First century Judaism was more multi-cultural than they were. They gather, a homogeneous lot, without an idea as to what will happen. Soon a violent wind destroys the morning calm. Luke describes the coming of the Spirit as a gale blowing into the house. Picture the curtains blowing, as they used to do in the days before air conditioning when a storm was rising. It was frightening. “What’s happening,” they wonder?  Luke goes on to say that the wind was like tongues of fire; like a wildfire that gains momentum consuming all that’s around. And those who had gathered begin to speak, in all different kinds of languages.

In addition to celebrating the giving of the law, the Pentecost holiday was special for another reason. Passover was considered the “high holy day” for the first century Jewish faithful. But because it was such a long trip, many would stay through Pentecost and would have caught wind of what’s happening at this time.[3] We need to remember that by the first century, Jewish settlements had been established throughout the known world. This explains why there were so many different people in Jerusalem for this festival. They’d come to worship; they’d come with expectation. And here, as they’ve gathered in their ancestral homeland, people who were no longer fluent in Hebrew, begin to hear the gospel in their native languages.

Again, God is the one who is acting. The early disciples and believers who’d gathered weren’t sitting around scheming, trying to create a strategic plan of how the church would grow.  And if they had been, you can bet they wouldn’t have even considered reaching such a diverse group of people as they did that day. After all, these people had a tradition of interacting only with those who looked and sounded and acted like they did.  God is doing the work here. God’s vision is much larger than they could imagine. God is calling all people to hear the good news of Jesus Christ. 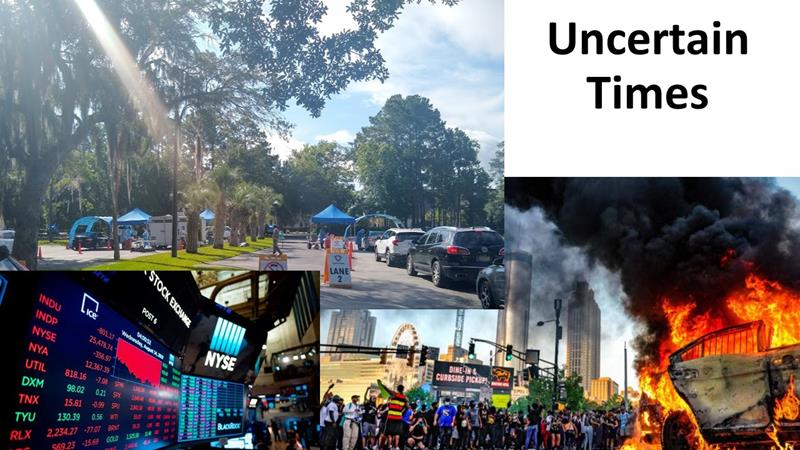 Friends, we live in an uncertain time. We must place our faith in God as revealed in Jesus Christ, and live humbly and compassionately, showing the world a different way to live with one another. Violence isn’t the answer. Love is. God loves this world and calls on his church to love the world. When we marginalize others, when we turn our heads at injustice, we fail to live up to our calling. 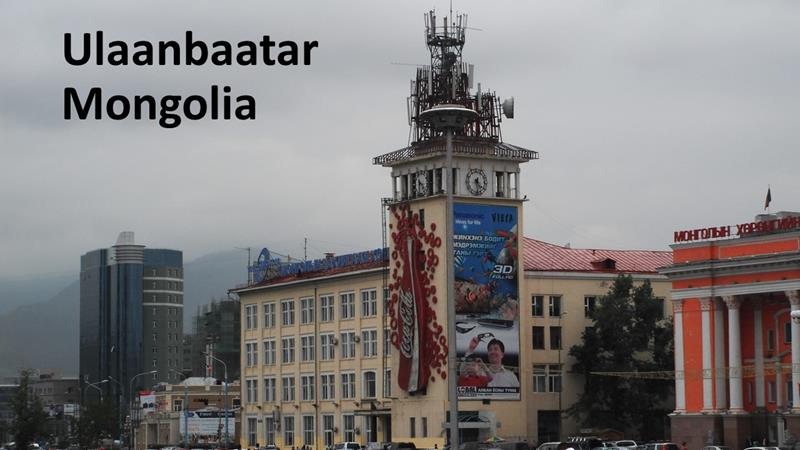 Let me tell you a story. I was in Ulaanbaatar, the capital of Mongolia and was walking with other tourists in the business section of the city. Across a four-lane road, coming toward us, was a man and woman. They were arguing. Then the man pulled back and hit the woman with his fist to her head, knocking her down. In shock, we looked at each other. Others had seen it, too, but no one except us-a group of English-speaking tourist-seemed fazed. We were outraged, yet never felt so helpless. If it had been an English-speaking country, we’d all been on the phone with the police. But here, few knew English and we couldn’t speak Mongolian. We needed those tongues of fire! 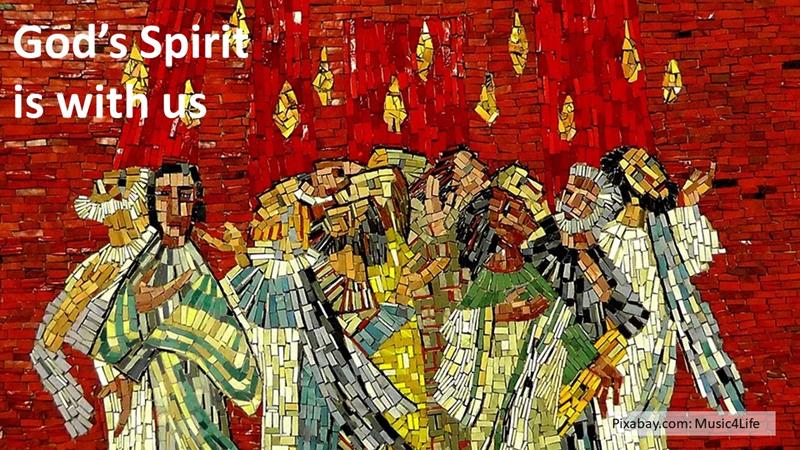 Pentecost shows us that not only does God show up, God gives us the tools needed to do the work for which we’re called. That motley group of disciples are able to preach in the languages of those gathered in Jerusalem. Today, we no longer have to wait for God to show up. God’s Spirit’s with us. Unlike Mongolia, in our country, in our neighborhood, most people understand us. We have no excuse. We must be compassionate toward those suffering from COVID-19. We should grieve the deaths of over 100,000 of our citizens, we need to do our part to keep the virus from spreading further, and we need to speak out against racial injustice. At Pentecost, God gave us a vision of the nations and people being brought together. It’s now our turn. We must help make the vision a reality. Amen.

[1] For a link between the cross and lynching, see James H. Cone, The Cross and the Lynching Tree (Orbis Books, 2011).