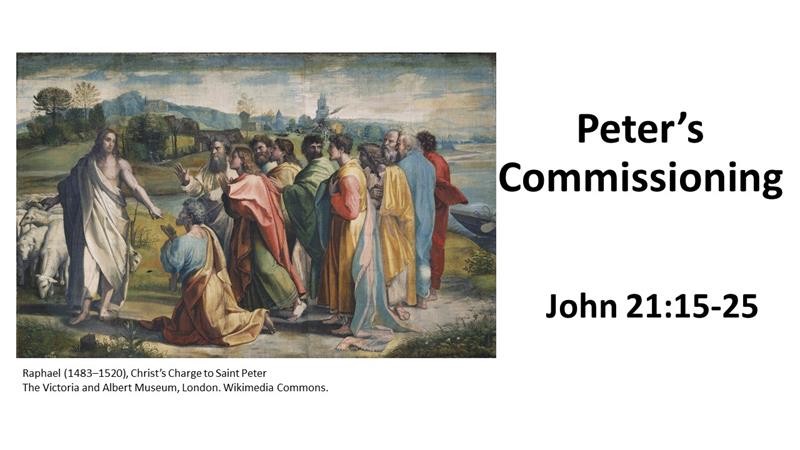 This service can be watched in it’s entirety on the church’s YouTube channel. If you want to just see the sermon, go to 13:00. Go to https://www.youtube.com/watch?v=vD3awv89c1E

We’re finishing up our look at Jesus’ post-resurrection encounters this week with the ending to the passage we began studying last week. As I indicated on several occasions throughout this series, the post-resurrection encounters generally had a mission component. We’ll this today. The disciples were sent out to do something-Mary at the tomb was sent to tell the Apostles, and the disciples what we know as the Sea of Galilee, Jesus gives Peter a mission.

Again, I’m using a classical painting to illustrate our text. Today, the painting is by Raphael, an artist who painted just before and at the beginning of the Reformation. To put this in perspective, this tapestry was finished the year before Martin Luther posted the 95 Thesis and is titled, “Christ Charge to St. Peter.”[1] I like the painting because it shows the sea (and glimpses the bow of a boat) along with a flock of sheep. Peter, a fisherman, is being commissioned to tend to Jesus’ sheep. The other ten disciples (remember Judas is no longer with them) look on. However in John’s gospel, we’re told that there were only seven disciples present. Hear God’s word for today. Read John 21:15-25. 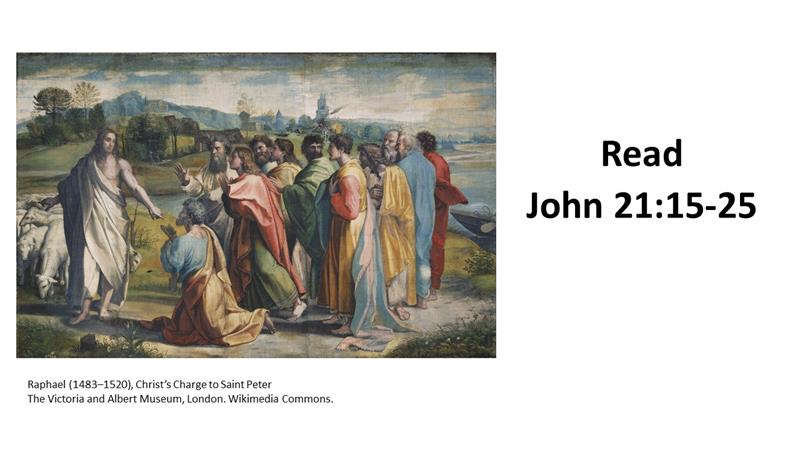 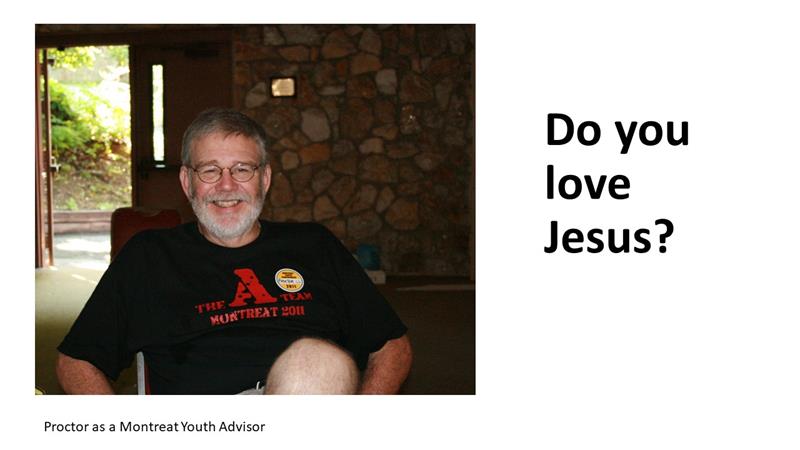 Some of you may know the Reverend Proctor Chambless. He’s a retired minister member of the Savannah Presbytery, and has served a number of congregations within our presbytery and across the South. When I came to this presbytery, Proctor was serving an interim position in another presbytery upstate. He wasn’t here. During the first person examined for ordination as a Minister of the Word and Sacrament at Presbytery, someone stood up and said that since Proctor wasn’t present, he was going to ask Proctor’s question. The question: “Do you love Jesus?” The presbytery, as a body, snickered. I realized I wasn’t in on the joke. I asked someone about this and was told that Proctor always asked that question. When Proctor returned, I figured out who he was before I met him. We had another candidate to examine and Proctor stood and asked this question. It’s kind of a fun thing. The rest of us are thinking probing questions to prod the examinee on the fine points of Reformed Theology, as Proctor, with his deep southern drawl, asks the essential question. “Do you love Jesus?” That’s the question Jesus asks Peter three times. And it’s a question we’re all to ask ourselves. Furthermore, as we’re going to see when we delve into this text, there is one way of knowing that we love Jesus. Do we care for others?

Let’s look at the text. Throughout this chapter, Peter is in the forefront. He’s the one who decides to go fishing. The other six disciples tag along. He’s the one, when he learns it’s Jesus on the shore, jumps into the water and swims to Jesus, letting the six others fight with a full net of fish. Now that breakfast is over, Jesus questions Peter in a way that almost seems as if he’s being commissioned or ordained for his task once Jesus has ascended to heaven. We’re not told this, but I image Jesus drawing Peter away from the rest of the disciples and putting his hand on this shoulder, saying “Simon, son of John.” 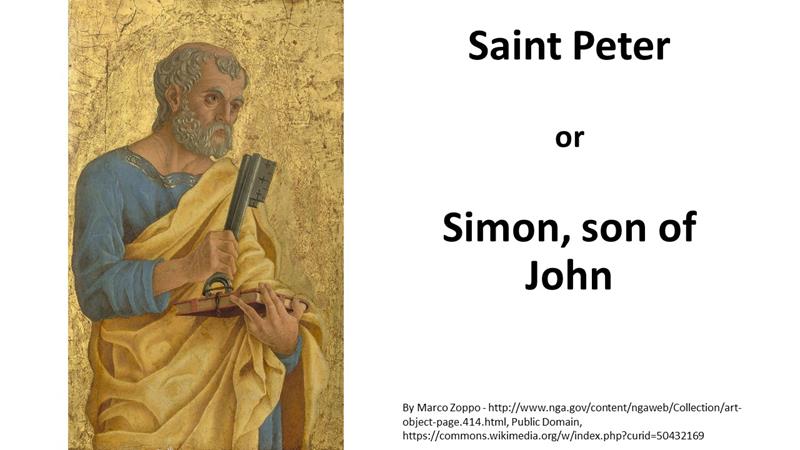 Jesus uses his full legal name. “Simon, son of John.” Did any of you have parents, or maybe a teacher, who when you were in trouble, would use your full name? “Charles Jeffrey!” I would hear that and immediately knew I had done something wrong. Was Peter in trouble? I don’t think so. But Jesus emphasizes the importance of his questioning. When someone uses your full name, it grabs your attention. Jesus asks Peter if he loves him more than these. We can assume Jesus is pointing over toward the other disciples. We’re told that Peter, in two of the gospels, brags at the Last Supper about how much more he loves Jesus than the others, so much so that he’ll never abandon Jesus.[2] Of course, pride comes before the fall, and later that night Peter denies Jesus three times. 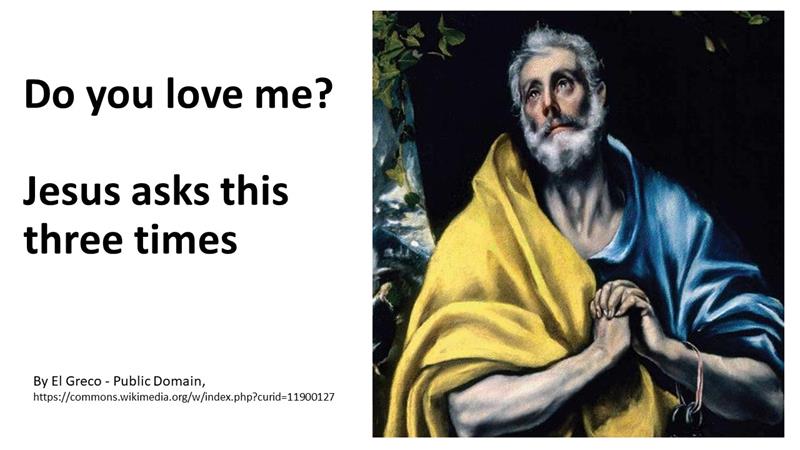 Now, after everything that has happened—the betrayal, the crucifixion, the resurrection—Jesus asks if Peter really does love him and, of course, Peter responds positively. “Yes, Lord, you know that I love you.” Jesus then tells Peter to feed his lambs. This questioning goes on for three times, with just slight variations.[3] After the second question and answer, Jesus says to tend his sheep and after the third, feed my sheep.[4] Jesus gives Peter the mission to care for those whom Jesus brings into his church. But Jesus repeatedly asking Peter if he loves him gets on Peter’s nerves. It bothers him, he’s hurt, yet Peter continues to answer, “Yes, Lord, I love you.” Maybe Jesus asks this three times to undo the triple betrayal Peter committed after Jesus’ arrest. Jesus wants to make sure that Peter understands he’s forgiven and that he’s ready to take over his responsibility of the church.

Peter is then informed of what kind of death he will endure. Peter, this wild and free man who so full of passion, will end up a prisoner hauled off to be executed. Peter earlier had boasted that he was willing to die for Jesus. It’s now seen as prophetic. Jesus ends this discourse with the words he first used to call Peter while there at the seashore, “Follow me.”[5] 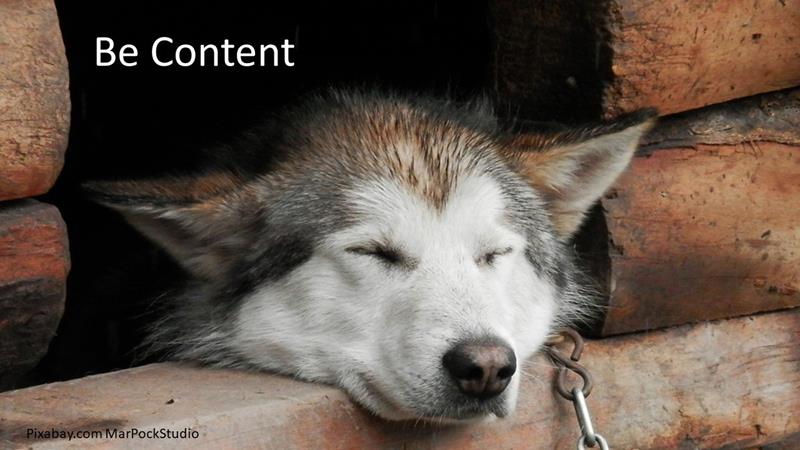 We’re not given a sense of just how this prediction of Peter’s death was received, but Peter must have pondered it, for he asks about another of the disciples. Jesus tells Peter a great truth. “Don’t worry about him and his death.” It’s almost as if Jesus is saying, “You have enough troubles. Don’t worry about what God seems to give someone else to worry over.” In other words, accept God’s gift as grace and be thankful. 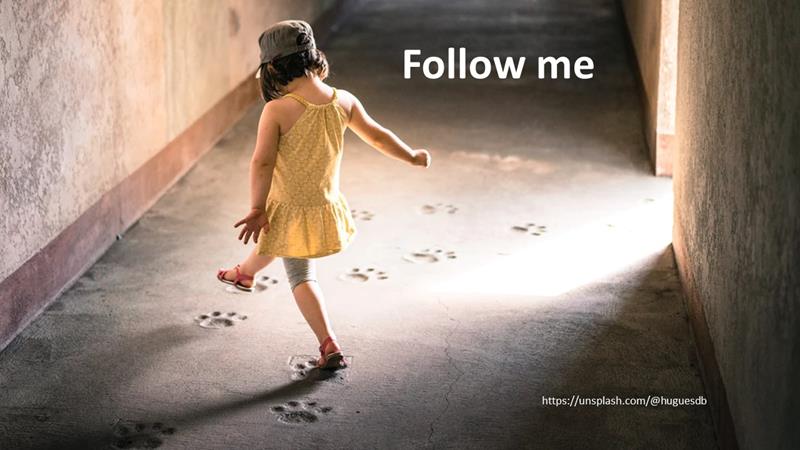 Here we are, fifty or so generations Peter.[6] This is a time of turmoil and fear, of pandemic and economic uncertainty. We’re all a little on the edge. What can we learn from this text?  Well, we’ll all have our own burdens. Hopefully, we won’t have Peter’s burden of a crucifixion. Also, we learn that some seemed more blessed in one area of life than another. Some get the virus and don’t even know it. Others get it and struggle to breathe and their bodies break down. Some die. Why? This text suggests that’s a futile question. Instead, we’re shown what we, like Peter, should be doing. We’re to follow Jesus, whose path led at one point to the nourishing waters of the Jordan and at another point to that hill name Golgotha, the place of death. And along the way, we do what we can to care for those whom Jesus calls. We’re not told here to save the world. In fact, Peter isn’t even told to save anyone. Jesus is the Savior. Peter, who is being retrained from having been a fisherman to being a sheepherder, is to care for those Jesus sends his way. And that’s the role of the church, to care for those whom Jesus sends our way. 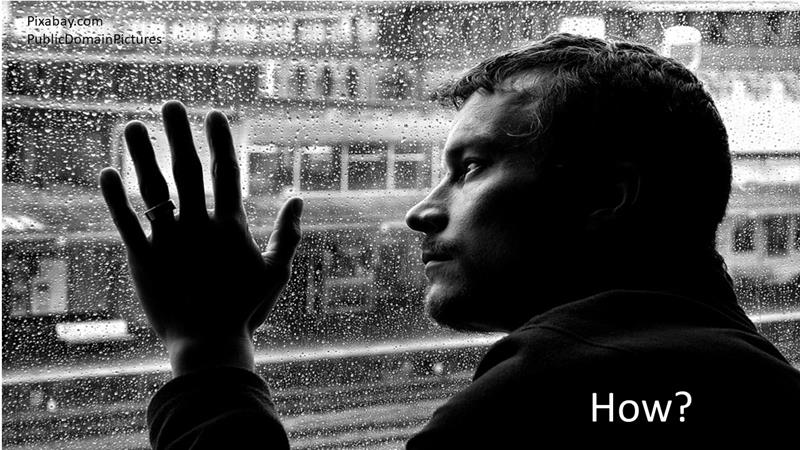 During these trying times, when we are hiding out in our homes, we might wonder how we can help anyone. There are ways. The Session, at the request of the Mission and Benevolence Committee, has called for a special offering to help care for the homeless in our community. Do what you can to help. The homeless ministries of Savannah are struggling to meet the needs of those who live under the bridges and on the streets.

Or maybe your gift is crafts and sewing. With plenty of time, you can help make masks, as my daughter and a neighbor of David and Linda Denhard has done. See my selfie on the slide? That’s an example of my daughter’s handiwork. Masks can be shared with nursing homes and for our own use when we are in public. When we start gathering back together for worship, masks will be encouraged. Wearing a mask not only protects us. If we’re asymptomatic, masks will protect others. Wearing a mask can be a gentle way of caring for Jesus’ sheep. 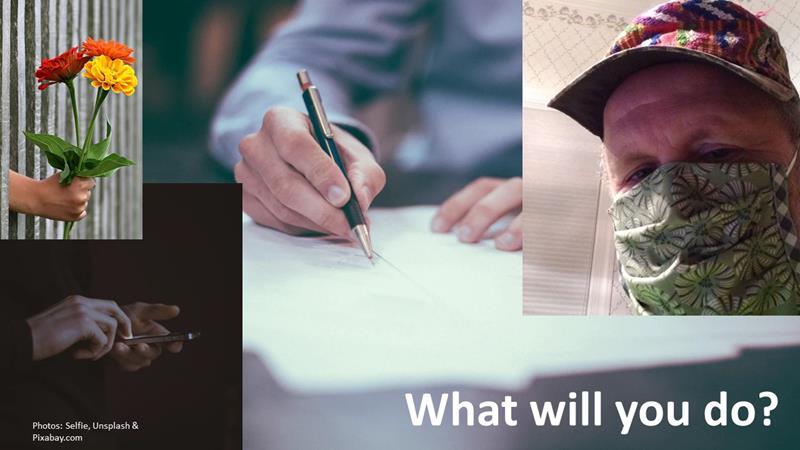 And if you’re not crafty, why not make some phone calls and write some letters. There are people who need to feel connected, especially to those who live alone. As Paul says in his first letter to the Thessalonians, “encourage one another, build up each other.”[7]

This week, I want to encourage everyone to reach out to someone and offer hope. For we who believe, are not to despair. We are to have hope and share that hope that we have in a loving Savior. When we do this, we are living up to the calling that was first given to Peter: “feed my lambs, care for my sheep.” Amen.

[1] The tapestry is also known as  “Christ’s Handing the Keys to St. Peter.” Raphael combines the story of Peter receiving the keys (Matthew 16:18-19) and Peter after the breakfast on the beach (John 21:15-17) to create this work. For more information see https://www.artbible.info/art/large/683.html

[3] Much has been made about Jesus use of the word love. The first two times, Jesus uses the Greek word “Agape.” Peter responds with the Greek word “Phila” (from which we get Philadelphia which means “city of brotherly love.”) The third time, Jesus uses “Phila” instead of “Agape.” These two terms are closely related and in English both are translated as “Love.”

[4] Lambs could be those new to the faith (those being initiated) while sheep could refer to those more mature in their faith.

[5] See Matthew 4:19 and Mark 1:17. In John’s retelling, Simon comes to Jesus through his brother Andrew and at their first meeting, Jesus changes Simon’s name to Peter. See John 1:40-42.