As Father’s Day is this weekend… 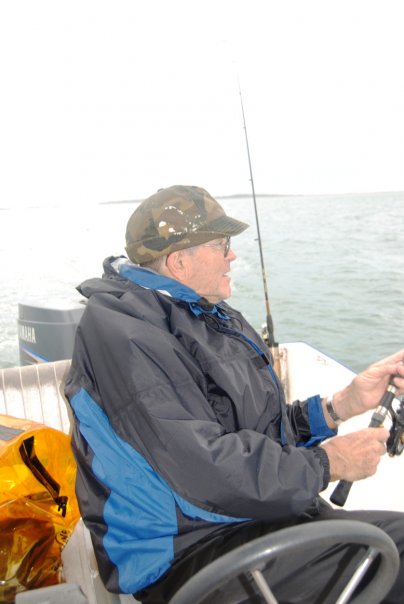 Fishing off the jetty at Cape Lookout on a foggy day

We moved “Down East” when I was nine years old. “Down East” in North Carolina means on or near the coast. My parents had always wanted to live near the ocean and when my father got an opportunity to transfer to the area, he took it. Dad quickly learned the art of fishing for flounder and taught my brother and me. We spent hours on the rising tide, fishing for flounder at Masonboro Inlet. Although such fishing may not be as graceful as using a fly rod, it requires at least as much skill. 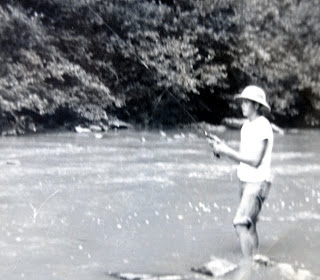 My father, as a teen, fishing on the Linville River

Dad taught us to tie our own rigging, using an 18 inch piece of light wire with a triple hook on one end and a one ounce torpedo sinker on the other. The rigging was attached to the line of a lightweight spinning rod. A live minnow, which we generally caught with throw nets (another acquired skill), was hooked through the lips. Walking in knee deep water armed with a light spinning rod we’d cast the line out into the depths, searching for holes where a flounder might be hidden. The line was slowly retrieved, the weight keeping the minnow near the bottom where flounders lay. You carefully felt for tell-tell bumps on your line, indicating a flounder taking the bait. When that happened, you’d loosen the drag and give the flounder about a minute to take the minnow into its mouth, before yanking the line in order to set the hook. If you prematurely yanked the line, you’d pull the minnow out of the mouth of the flounder. From such fishing, we learned patience. Hurrying only caused you to miss fish. 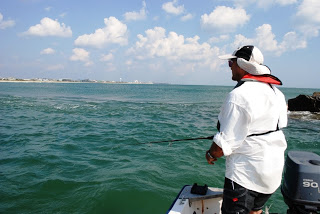 Fishing off the jetty at Wrightsville Beach ~2010

Shortly after we moved to the area, Dad brought a 14 foot johnboat with a six horsepower Evinrude outboard motor. For years, that was the only boat he had and it was perfect for navigating the creeks running behind Masonboro Island, a nine mile long barren strip of beach that stretched from Masonboro Inlet to Carolina Beach Inlet. He’d take us fishing on the beach for founder on the rising tide and for Bluefish during the fall run. The island became like a second home. Since the creeks only have water in them on high tide, a fishing trip that was more than an hour or two committed you for at least half a day. Often, we’d make a two day trip, camping overnight. In the fall, at low tide, we’d collected oysters and in the evening roast them over coals. At times, breakfast consisted of roasted bluefish. 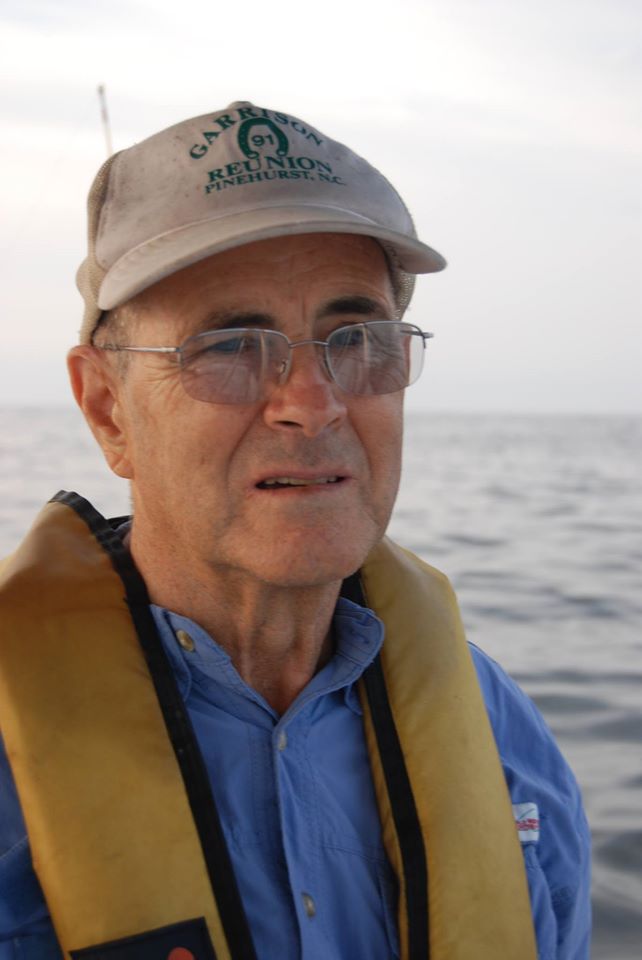 At the helm while fishing offshore, 2010

On one of our overnight fishing expeditions, my dad hooked a huge fish on a heavy surf rod. For nearly an hour he fought the fish, as he’d get it almost up into the surf only to have it run back out into the ocean. Finally, he beached the largest Red Drum I’ve seen. The tide had already dropped and there was no way we could get the fish back to the mainline till the next morning. My dad knew the fish might be close to a record, but since he couldn’t get it to a weight station, and since our cooler wasn’t large enough to hold it, he gutted the fish, stuffed ice in its hollowed cavity, and buried it in the sand. The next morning, we dug the fish up and took it to be weighed. Even after being gutted and drying out a bit overnight, the fish still weighed 47 pounds, just a couple pounds shy of the season’s record. My father stoically accepted fate. If he had been able to get the fish to the marina the day before, he might have set the record. However, if it bothered him, he never let on to it. Another lesson taught by action, you don’t complain about things you have no control over. This, by the way, included mosquitoes and sand gnats and the weather. There was no need to complain about the obvious. 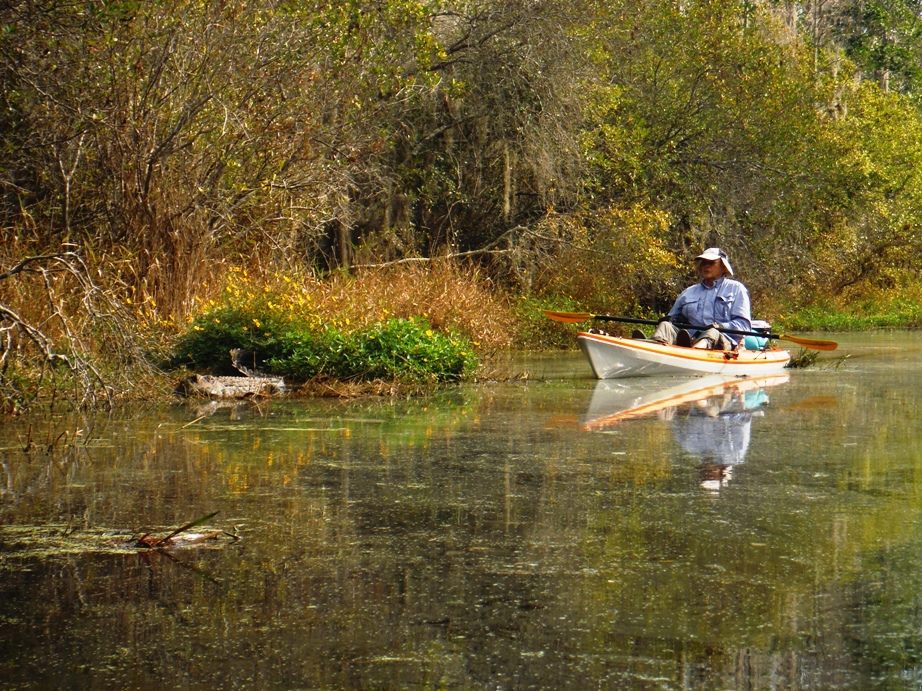 Paddling in the Okefenokee. A good son would have warned his dad instead of waiting to catch a photo of when he discovered the alligator

My father seldom spoke of the beauty of it all, but the times I spent on the beach with him instilled in me an awe of creation. I’ve seen more sunrises and moonrises on the ocean that I can count. I’ve watched many sunsets behind the marsh grass of the Myrtle Grove Sound. I taught myself early the names of the stars, especially the autumn sky, since fishing was best in the fall. There’s nothing more majestic than watching Orion’s belt rise above the ocean on a moonless night. Enjoying the outdoors was something he taught silently. 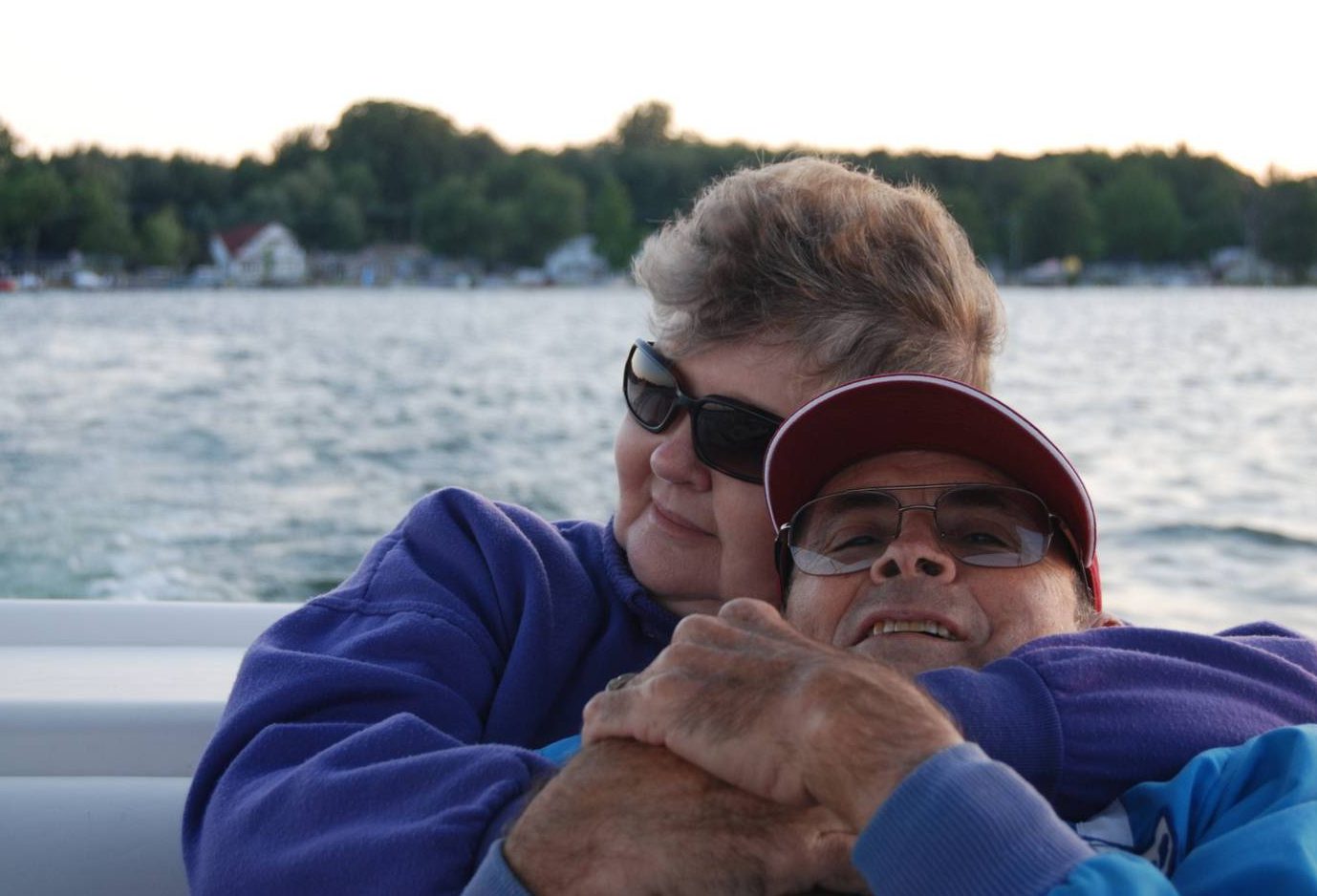 Over the past fifteen years, I’ve seen another new side of Dad as he cared for his wife, my mom, as her mind and mobility slowly disappeared due to Alzheimer’s. Mom and Dad were sweethearts in high school and have been together ever since. He goes down to the nursing home where my mother lives to feed her breakfast every morning. While they have restricted most guests because of the COVID-19 pandemic, they still let my father come in and feed my mom even though she no longer acknowledges him or anyone. In these latter years, my father, through his commitment, is silently displaying grace and love and is an example for all who are around him. 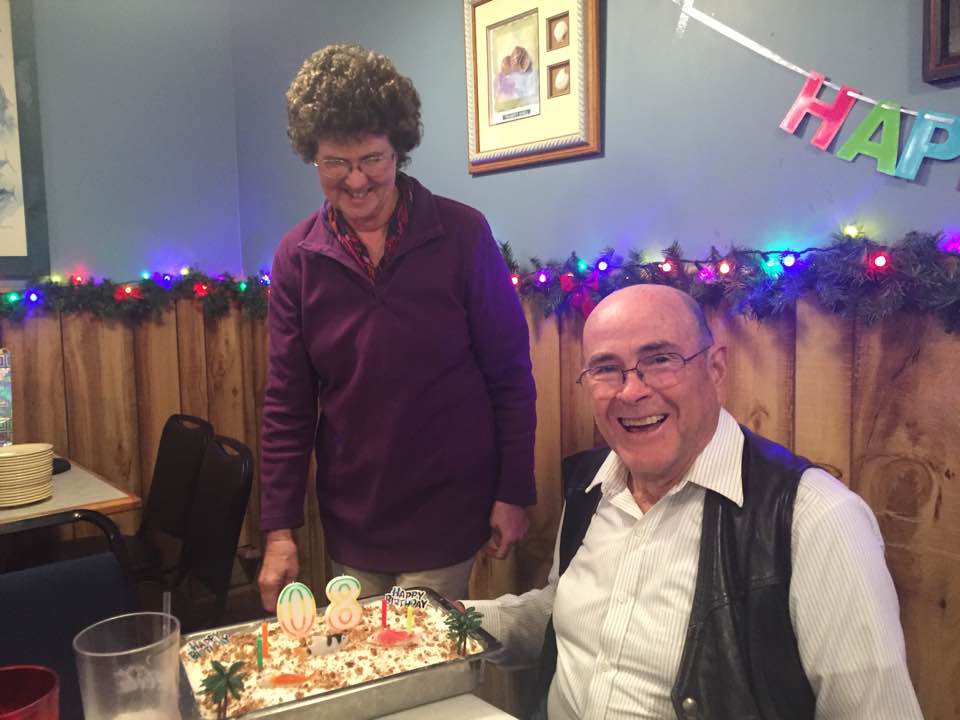 A few years ago with my sister presenting my father a cake at his 80th (or was it his 08th?) birthday dinner at the Pirate’s Table in Wilmington, NC.